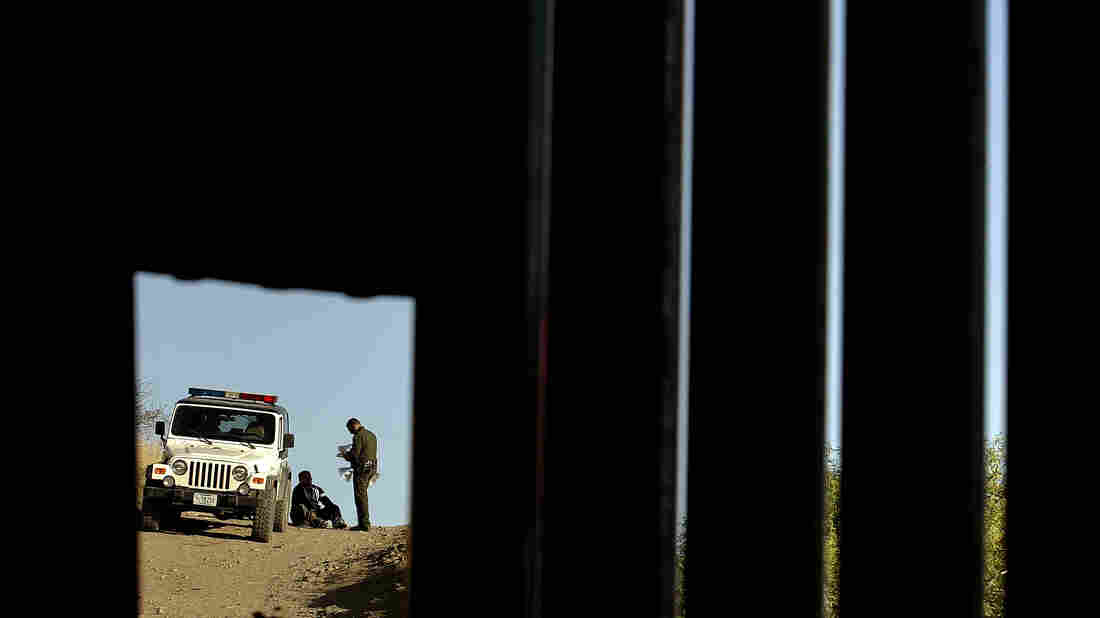 A U.S. Border Patrol agent questions a man in Nogales, Ariz., seen through a hole in a metal fence marking the border between the U.S. and Mexico, in 2007. Guillermo Arias/Associated Press hide caption 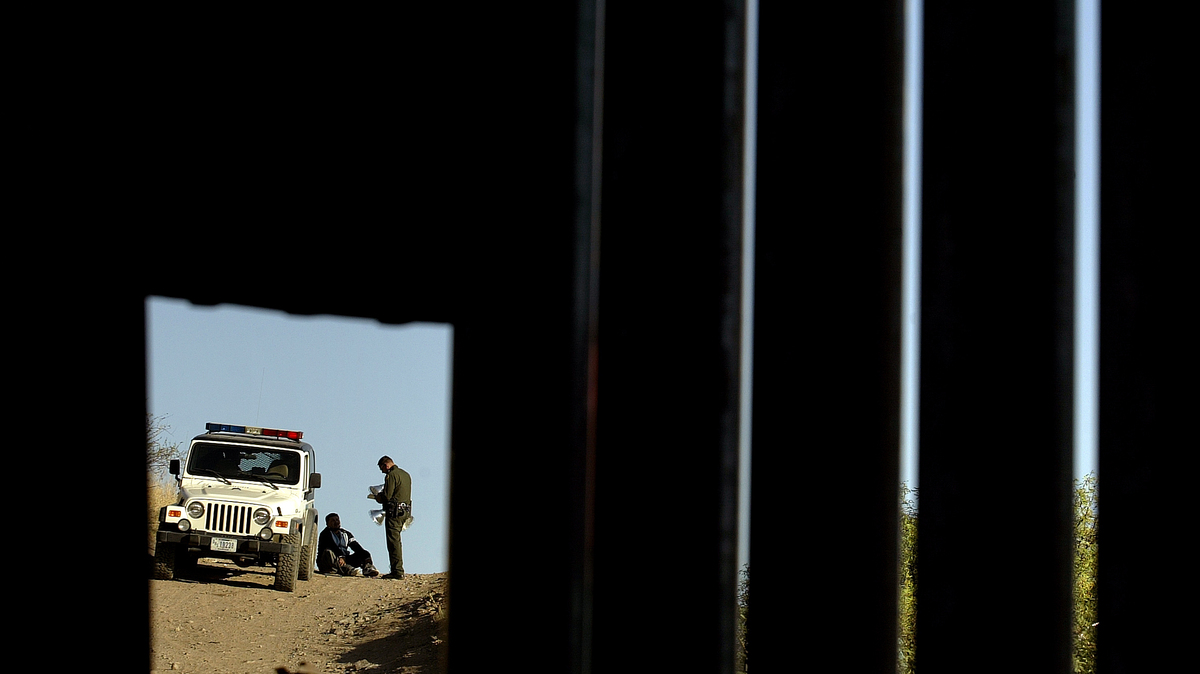 A U.S. Border Patrol agent questions a man in Nogales, Ariz., seen through a hole in a metal fence marking the border between the U.S. and Mexico, in 2007.

The recent arrest of an activist from the group No More Deaths is highlighting the rising number of people who die crossing the U.S.-Mexico border and the challenges that humanitarian workers confront when they try to help.

At least 7,209 people have died while illegally crossing the southwestern border over the past 20 years, according to U.S. Border Patrol data, but an investigation by USA Today finds official statistics underestimate the number of deaths. The number is much higher because, for the most part, federal authorities' casualty count does not include people whose remains are recovered by local authorities.

While data reveal that fewer people are crossing illegally overall, more migrants are taking remote and dangerous routes in Arizona due to increased border security at safer crossing points in California and Texas, says Alicia Dinsmore, a volunteer with No More Deaths.

"People weren't crossing through treacherous terrain like the terrain they currently are until the 2000s," she tells Here & Now's Robin Young. "In the mid-'90s, Border Patrol changed its enforcement policy to build up enforcement in the easy-to-cross areas and funnel people into the harsh, desolate desert terrain."

Since 2001, the remains of at least 2,832 migrants have been recovered in southern Arizona, according to the Arizona OpenGIS Initiative for Deceased Migrants. Before the start of the decade, fewer than five dead border crossers were found in Arizona each year; that number jumped to 79 in 2001.

Humanitarian groups have stepped in to help the migrants by providing food, water and medical services. But a report published last week by No More Deaths and La Coalición de Derechos Humanos found that Border Patrol agents routinely sabotage those efforts.

Water containers were vandalized almost twice a week on average in an area of the desert southwest of Tucson from March 2012 to December 2015, the report found. Videos posted online also show agents kicking over water jugs in the desert.

On the same day the report was released, agents arrested No More Deaths volunteer Scott Warren, a faculty associate at Arizona State University, on charges of harboring immigrants trying to enter the country illegally in a building in Ajo, Ariz.

No More Deaths stopped short of calling Warren's arrest retaliation for the report but said the timing was "suspicious." Seven other volunteers were also charged with federal crimes this week.

"We don't smuggle them, we don't do anything to help them enter the United States, we do nothing illegal," said Bill Walker, Warren's attorney. "This place that they raided is not in the middle of the desert, it's not hidden anywhere. It's in the city of Ajo, and it's been used for a long time, not to help smuggle migrants, but to give medical care and food and water."

A Border Patrol spokesperson declined to comment on the Warren case and deferred to the U.S. attorney's office. Denying that the agency targeted Warren or the aid group, spokesman Carlos Diaz said, "It wasn't retaliation."

In previous cases, federal officials have accused volunteers of littering in wildlife areas, but aid workers say water jugs left in the desert save lives.

Border Patrol and the Department of Homeland Security say they are preventing deaths by discouraging migrants from trying to cross in the first place, but critics say that is not happening.

The agency said "we are going to ... put enforcement in the easy-to-cross areas and use the risk of death in the desert as a deterrence to crossing," Dinsmore says. "So the idea that Border Patrol is the actor that should be saving people's lives is absurd because they are creating this crisis in the first place."