Accessibility links
Federal Judge Seems Sympathetic To Anti-Corruption Case Against President Trump Lawyers for Maryland and the District of Columbia argued in court Thursday that President Trump is violating the Constitution's Emoluments Clause. They left the preliminary hearing feeling confident. 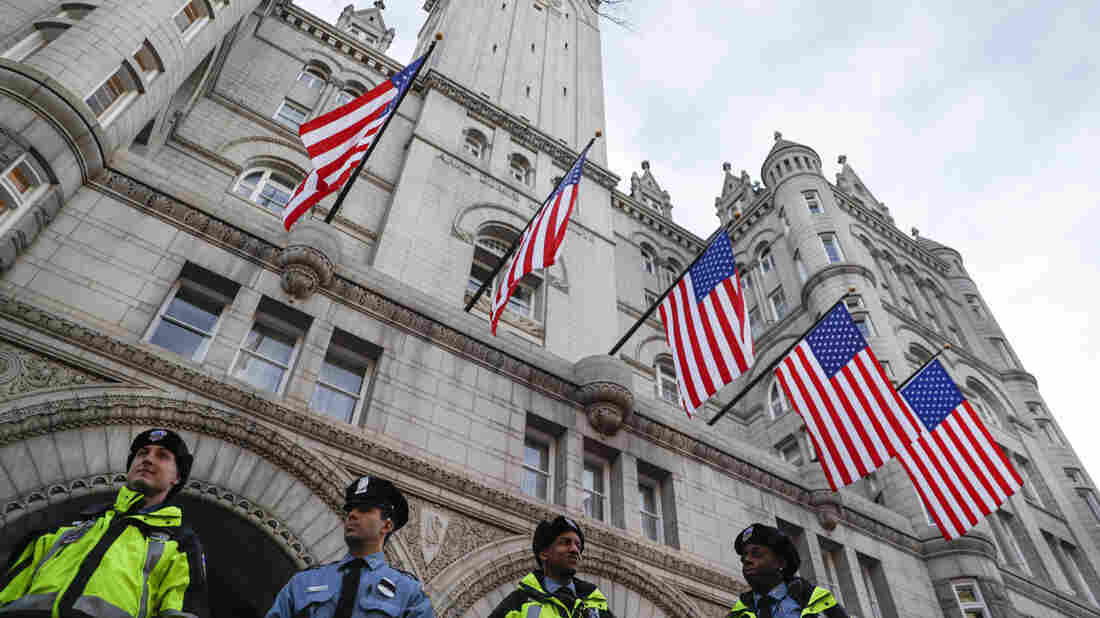 Police stand guard outside the Trump International Hotel, blocks from the White House, last year. The hotel has become a centerpiece of lawsuits claiming the president is profiting from the office. John Minchillo/AP hide caption 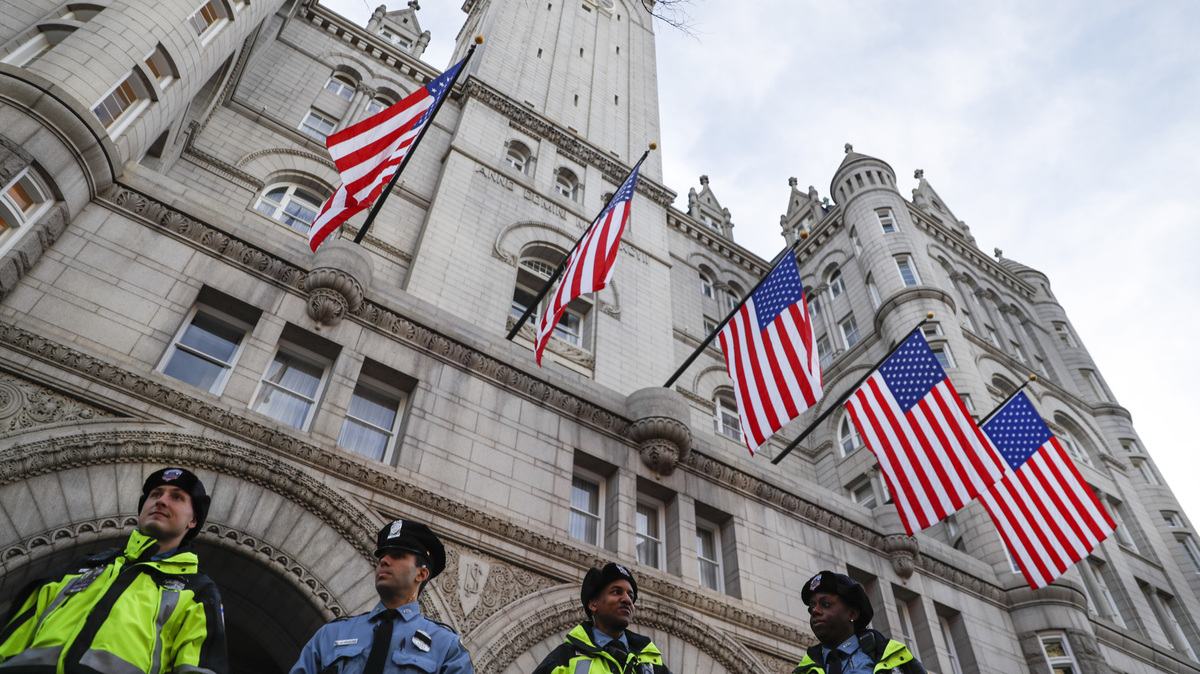 Police stand guard outside the Trump International Hotel, blocks from the White House, last year. The hotel has become a centerpiece of lawsuits claiming the president is profiting from the office.

Barely a month ago, a federal judge in New York dismissed an anti-corruption lawsuit against President Trump.

But on Thursday, another federal judge, in a different courtroom, gave the same basic argument a much friendlier response.

Judge Peter Messitte, of federal district court in Greenbelt, Md., seemed sympathetic to the assertion that Trump profits from the nexus of his hotels and the presidency.

Trump Wins First Round In Legal Battle Over Emoluments

After A Year In Office, Trump Still Facing Constitutional Challenges Over Businesses

During a preliminary hearing, the argument against Trump was made by two plaintiffs — the state of Maryland and the District of Columbia. They allege that Trump is violating the Constitution's Emoluments Clause, which bars any president from personally profiting from his dealings with foreign governments — or even U.S. state governments.

"The fact is, Trump is taking money from foreign governments," Maryland Attorney General Brian Frosh told reporters after the hearing. "He's taking money from the United States that's he's not entitled to, and he's also receiving payments from states — all that violate his oath of office."

One major point of contention involves the Trump International Hotel, just a few blocks from the White House. It opened weeks before the election and quickly became a rendezvous point for the incoming president's allies and supporters. The plaintiffs say it is siphoning business from other venues in the Washington area, because big spenders see it as a place where they can influence presidential decision-making.

The Justice Department is defending the president. Department lawyer Brett Shumate argued the lawsuit amounts to an "abstract political disagreement" with the president and much speculation by the plaintiffs.

He said Maryland and the District infer competition between Trump's hotel and others in the Washington metro area and contended the plaintiffs haven't suffered any harm that justifies a lawsuit — essentially that they don't have standing to sue.

Messitte had plenty of questions for both sides.

He urged Loren AliKhan, deputy solicitor general for the District of Columbia, to close a legal loophole by amending the suit, naming Trump as defendant both as president and personally. As filed, it names him only as president. When AliKhan expressed concerns, Messitte briefly pressed the point and then said, "It's your call, not mine."

And when Shumate said, "He only can be sued because he's president," Messitte shot back, "They aren't challenging the presidential function."

The judge wasn't interested when Shumate sought to invoke the previous emoluments case, in New York. He quickly dismissed Shumate's reference to one section of that judge's ruling, saying, "It was just one sentence. There was no analysis at all."

When Shumate raised the ruling again, Messitte told him, "Your argument should stand on its own."

Without Apology, Trump Now Says: 'Obama Was Born In' The U.S.

As the hearing ended, Messitte said he would issue a ruling "as soon as I can." That probably means about two months.

Last month, Judge George Daniels in federal district court in Manhattan ruled in a similar case, brought by the watchdog group Citizens for Responsibility and Ethics in Washington along with three plaintiffs from the hospitality industry in Manhattan and Washington.

Daniels dismissed that case, saying it's up to Congress, not citizens, to act on the Emoluments Clause.

"Congress is not a potted plant," he wrote in his opinion. CREW has said there will be an appeal.

But Messitte's more sympathetic questions gave the plaintiffs in the Maryland case more optimism about their prospects.

"We came into this case confident about our standing, and we leave this courthouse even more confident," District of Columbia Attorney General Karl Racine said after the hearing.

The stakes are high. If the District of Columbia and Maryland win on the question of standing, they could seek access to financial records for Trump's Washington hotel — and for other properties as well.

What they ultimately want is a court order telling the president to divest himself of his financial empire. It would be the kind of court order no president has ever faced.

Shumate said divestiture wouldn't stop people from spending money at the Trump hotels. But the plaintiffs hope it would separate the president from the profits.