Accessibility links
Binti's Story Is Finished — But Don't Expect Completion Nnedi Okorafor winds up her saga of a spacefaring Himba girl from Earth in Binti: The Night Masquerade — but she's warned readers not to expect a neat conclusion, and the book bears out her warning. 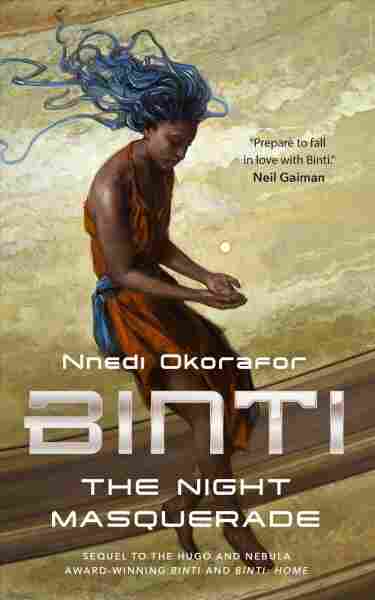 Nnedi Okorafor's Binti trilogy is now complete: The Night Masquerade is the final instalment in a series she's described as "African girl leaves home. African girl returns home. African girl becomes home." It's a beautiful proposed structure, a Hero's Journey that rings truer for me than Joseph Campbell's, resonating deeply with my experiences of diaspora, roots, and community. Binti left her Himba family on Earth in order to travel to Oomza University, far beyond the stars; she left Oomza in an attempt to manage her trauma and find herself again in the deserts of her home; and there, in the desert, she incorporated new revelations about her history into the anthology of herself, before being shocked into an awareness of impending doom.

But Okorafor has also warned "Don't go into the story expecting specific things because of the label slapped on it" — a warning I should've perhaps taken to include her own description of the trilogy. From "African girl becomes home," I expected the third book to synthesise the material in the previous two, to give some sense of completion and a new, different wholeness. What I got, instead, was a book that seemed to know exactly where it wanted to end up but utterly indifferent to how it got there.

The Night Masquerade picks up where Home left off, with Binti learning, through her newly enhanced senses, that her home — and her dear friend Okwu, a jellyfish-like alien from a race called the Meduse — is under attack from the Khoush, Earth's dominant ethnicity and the Meduse's ancestral enemies. With the help of her new friend Mwinyi — a member of her father's people, the Enyi Zinariya — she navigates the desert while plagued with nightmares of violence, knowing she must find a way to broker a peace once and for all. But Binti's story is nothing quite so straightforward.

This is a story of synthesis — like Binti herself, it's made up of several conflicting parts in need of reconciliation. We are introduced to several new concepts: Binti being overwhelmed by memories from her newly awakened heritage, of the alien Zinariya and their history of contact with humans, beginning with a girl named Kande; Mwinyi's magical abilities, like and unlike Binti's own; the role of the Night Masquerade, a mysterious figure auguring change, in Binti's community; and something called Himba deep culture. But these pieces rattle around like dice in a cup, configured so haphazardly that the book feels less like a story and more like a sequence of things happening — a necessary, but rather insufficient, component of storytelling.

My story-loving brain often took a back seat to my academic brain while reading. Where my story-brain was annoyed, perplexed, disappointed, my academic brain poked at the distance between the book and my enjoyment, held up my feelings to the light. The things that turned me off as a casual reader are the things that lit my interest in the limits of craft and narrative, that made me want to write essays investigating my own questions rather than reviews complaining about the lack of answers.

Story-brain asks, why was Kande's story introduced and abandoned? Why did the book's entire narrative bend towards the rings of Saturn in a massive anticlimax made more of a thud by Binti calling it anticlimactic? What is the point of the Zinariya? Why does the book entirely sidestep Binti dealing with her family? Why establish at length the differences between human cultures but look at the entire race of Meduse as single-minded warriors, to the point that Binti's bouts of quite understandable rage are called her "Meduse anger?"

After loving 'Home' as much as I did, I wanted more from this, more rigor, more thoughtfulness, more craft.

Academic brain replies: Can't aliens be metaphors for the ways in which we process trauma and reintegrate with our lives? Can't things be left suggested and unfinished? Can't the world contain marvels that aren't explained to our satisfaction? Isn't it interesting that you ask "what is the point," when perhaps the point is just having a black girl with tentacles for hair possessing the power and freedom to float among Saturn's rings the way Binti does in Dave Palumbo's beautiful cover art? Can't that vision of grace be enough?

It wasn't enough, for me. After loving Home as much as I did, I wanted more from this, more rigor, more thoughtfulness, more craft. I do expect authors to tie up loose ends; I do expect more from books than a sequence of interesting situations. But taken as moments, as droplets refracting light, those situations are generative, moving, and often powerful.

The Night Masquerade concludes by holding Oomza University up as a shining example of an ideal society — but what makes it ideal is its diversity, its heterogeneous nature, its enormous capacity for accommodating difference. It's almost an invitation and a challenge to resist seeking unity or craft in this final piece of a three-part story whose structure suggested it, and then shrugged it off.