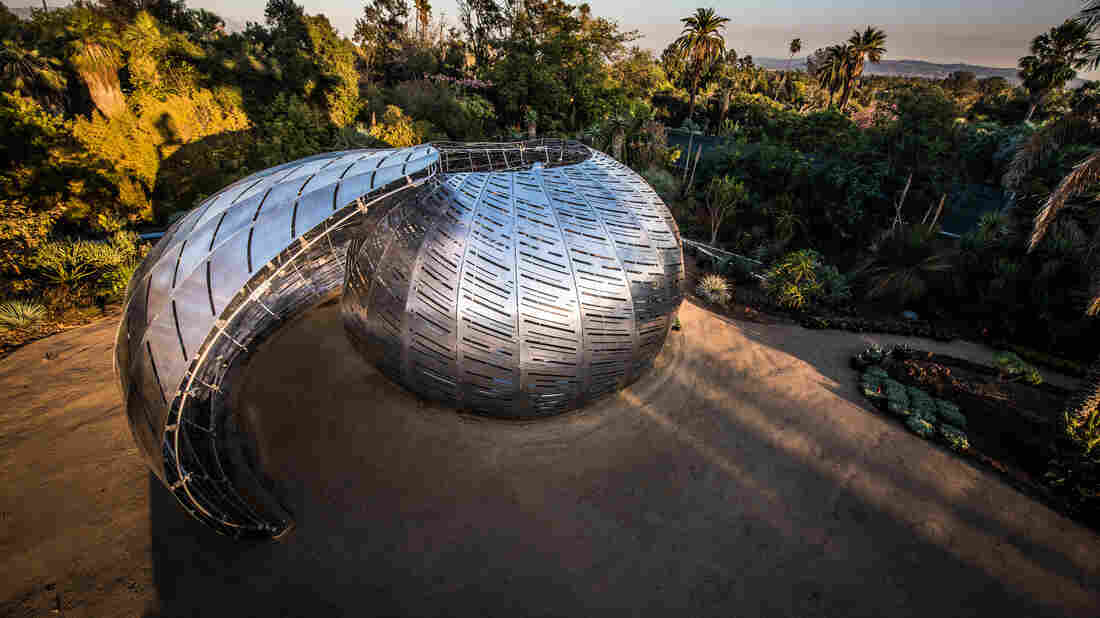 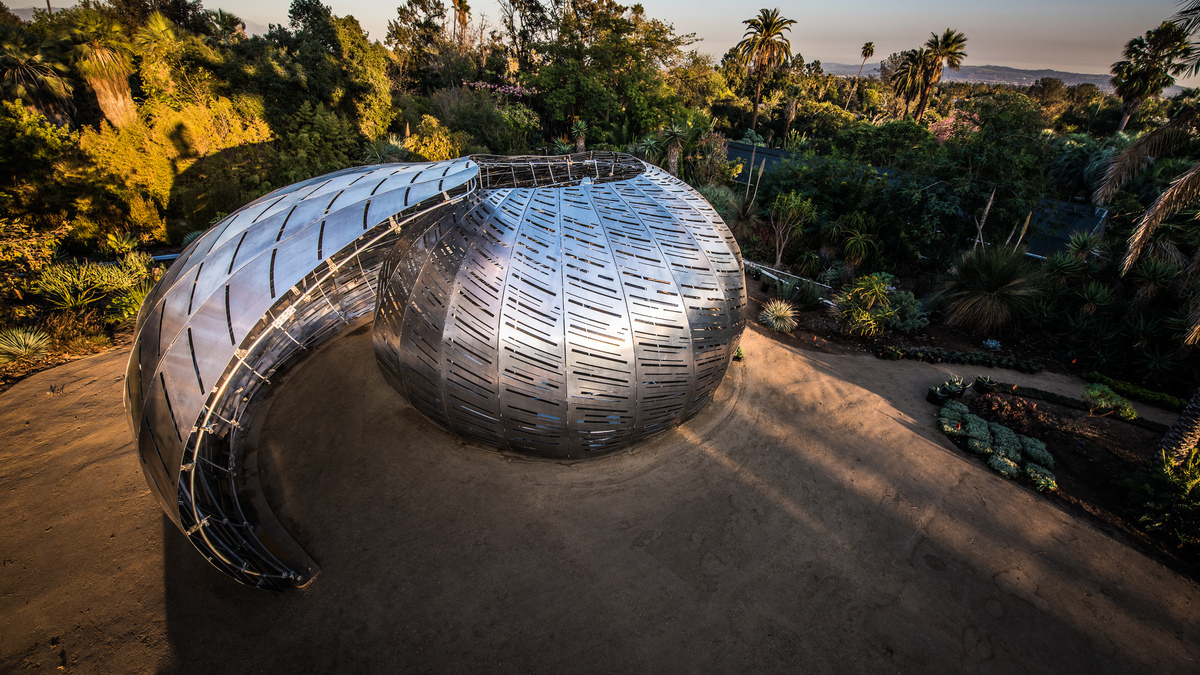 Nestled among palm trees at the Huntington Library, Art Collections and Botanical Gardens near Pasadena, Calif., there's a mysterious, metallic structure that curls like a nautilus shell. It's called the Orbit Pavilion, and it was created by a team of artists at NASA's Jet Propulsion Laboratories, or JPL.

Step inside the 17-foot-tall structure and you'll hear otherworldly sounds triggered by the tracking signal of 19 orbiting satellites above Earth.

"All day long they move all around you," says artist Dan Goods. "It's much like listening to a bird sort of flying across the sky. And in this particular case, it's satellites that are helping us understand the Earth." 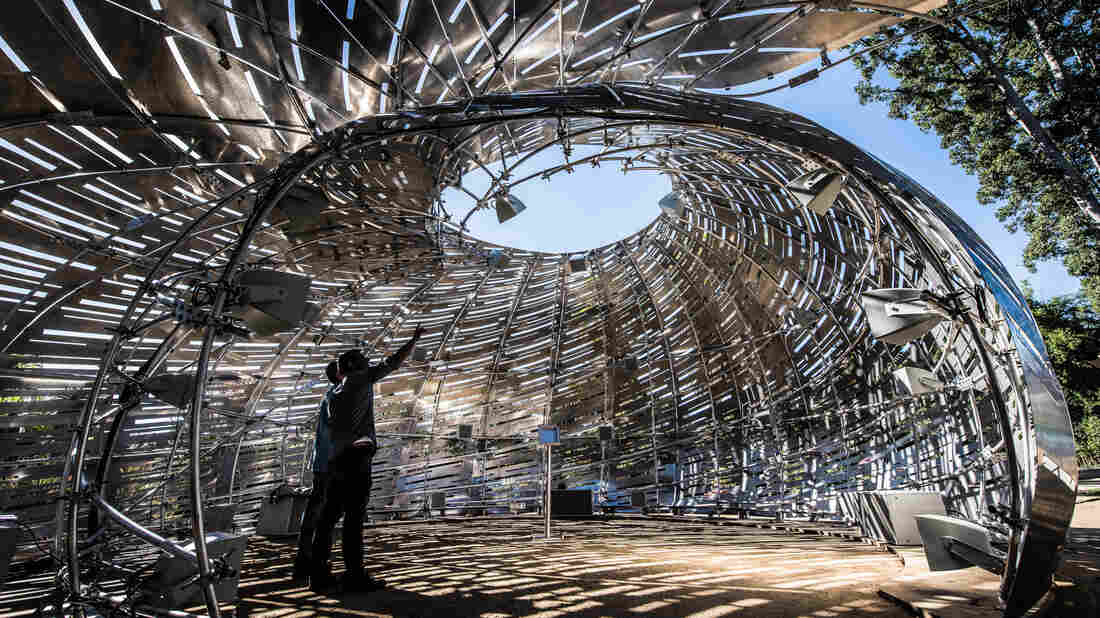 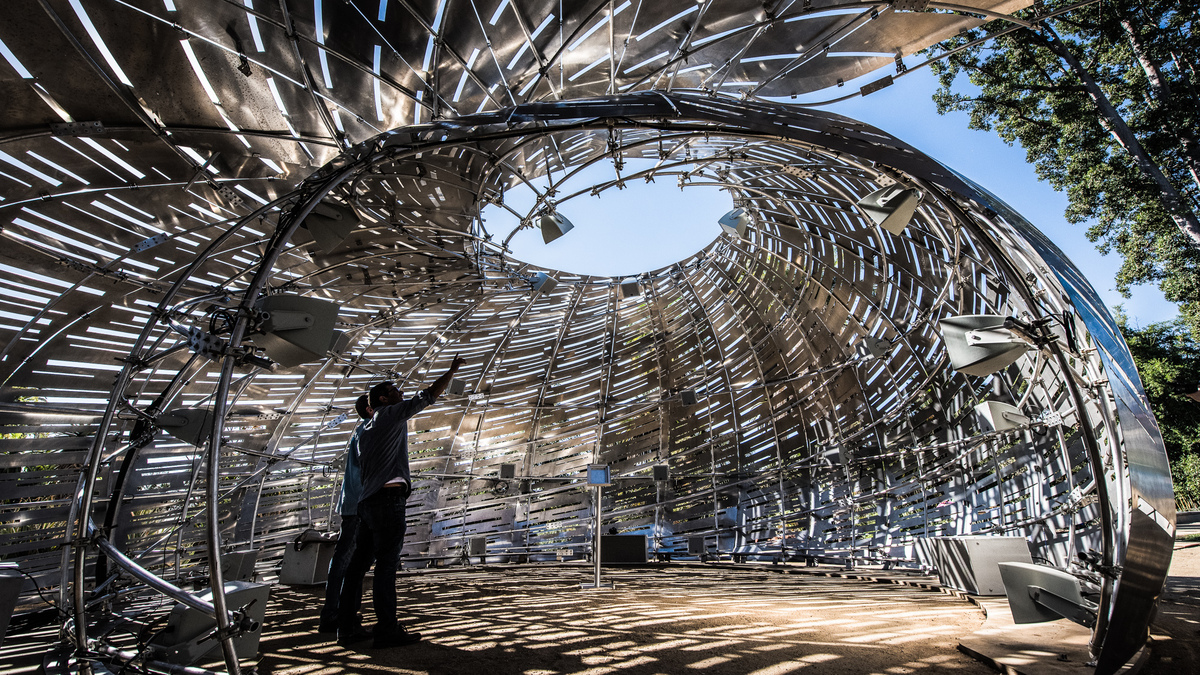 The Orbit Pavilion produces sounds based on orbiting satellites.

Goods heads JPL's visual strategy team, known as the Studio at JPL. His team has made travel posters for planets in distant galaxies, and they've simulated Jupiter's churning atmosphere in a small room. They once drilled a hole in a grain of sand, then displayed it alongside six rooms filled with sand to give a sense of how tiny we are in the vast universe.

Goods describes his team as "artists, designers, makers, thinkers helping come up with ways of telling the public about what NASA does, as well as helping scientists and engineers think about the future."

He's speaking from a wood-walled JPL conference room lined with the paintings of stern-faced former directors, including the one who hired him. Goods says, "The director of JPL gave me a six-month opportunity, and that was 14 years ago. What I find is that a lot of really creative people here — we think in similar ways. You know, we're always trying to experiment; we're trying to ask big questions and see where our experiments take us. It's been an amazing place. It's like a playground for nerds here."

Being Different Helped A NASA Roboticist Achieve Her Dream

Projects like the Orbit Pavilion are meant to engage the public, but many of the team's art experiments live on JPL's highly secure Pasadena campus. (Those pieces are meant to reinvigorate scientists who may not get feedback from their projects for months, or even years.)

Back in 2013, during its mission to Jupiter, NASA's Juno space probe was set to make a brief pass near Earth, and Goods hatched a plan: Ham radio operators around the world would team up and contact the spacecraft in Morse code.

"We ended up getting thousands of people all around the world to all signal at exactly the same time, and we had them say, 'Hi,' " he recalls. "... We got the data back, and we could actually hear them. But when you hear the sound, it's beautiful because it really is these thousands of people from around the world all working together to do something. And it says 'Hi.' "

Goods' team works out of a nondescript trailer that's packed with stuff — remnants from projects, architectural models, plans and images pinned-up on every conceivable patch of wall. David Delgado, Goods' longtime collaborator, is working on a project inspired by a NASA satellite that tracks changes in water on Earth.

"We have water that's melting from the glaciers up in Greenland and going into the ocean," Delgado says. "So just to get a sense of where we are — I mean, how much water are we using, what's going to happen in the future, rising sea levels — we're building a digital water feature that will show the flow and movement of water around the Earth." They haven't decided what final form that project will take.

The Studio's mission isn't so different from that of JPL's scientists: It aims to inspire a sense of wonder and encourage the public to think about the universe and our place in it.

Andrew Limbong and Ted Robbins produced and edited this story for broadcast. Sydnee Monday and Nicole Cohen adapted it for the Web.