Accessibility links
Federal Workers Face Cuts, Low Morale One year into the Trump administration there are thousands of rank-and-file vacancies and hundreds in key management posts. A government shutdown and hiring freeze has led to a beleaguered workforce. 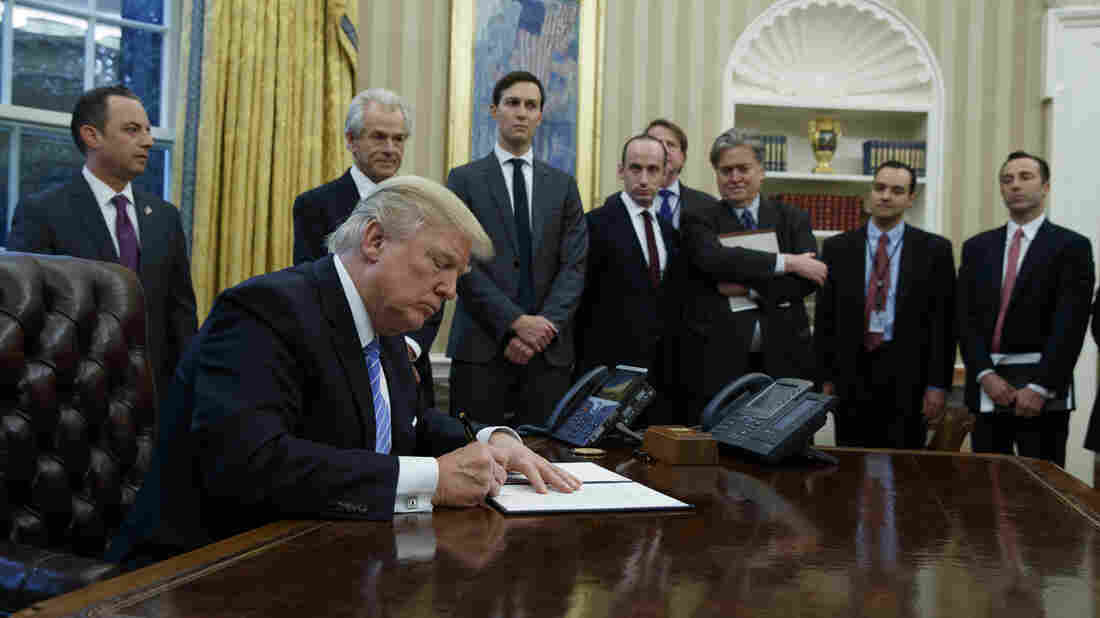 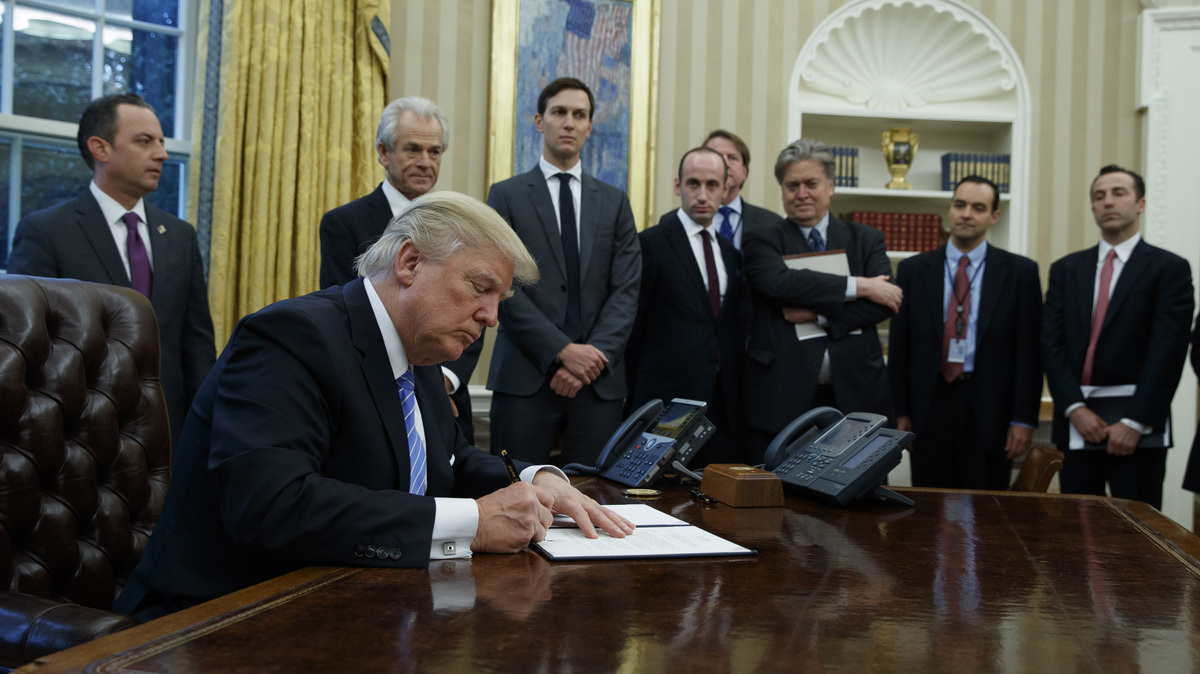 President Trump signs an executive order implementing a federal government hiring freeze, on Jan. 23, 2017, in the Oval Office of the White House.

The past year has been a tough one for the federal workforce. There was a hiring freeze at many agencies. For three days earlier this month, there was a government shutdown, leaving many workers to wonder when their next paycheck would arrive.

Now, as President Trump prepares his first State of the Union address, one issue he is expected to take up, if not there then in his soon-to-follow proposed budget for fiscal year 2019, is reorganizing the federal bureaucracy.

It's a prospect that many in the federal workforce are dreading.

Already, the state of the federal workforce is described as low. Morale "is the lowest that I have ever seen it in my just shy of 40 years" being a federal employee and working with federal employees, said J.David Cox Sr., president of the American Federation of Government Employees, which represents some 700,000 federal workers. Agencies, he says, are already short-staffed, with vacancies unfilled, and Cox worries pay will be frozen.

"We are concerned," Cox says, "because reorganization means let's figure out a way to cut or do more with less and do away with services that the American people want."

Cox says the short staffing runs across a range of government agencies, including the Border Patrol, which he says is down 2,000 employees, to the Veterans Administration, which he says has a shortfall of 49,000 workers.

And that shortfall of help, combined with new legislation, means an increased workload for some federal employees.

Keena Smith is a veterans service representative with the Veterans Benefits Administration in St. Louis. "I'm happy to go to work," Smith says "because I love what I do." But she says her job has gotten more stressful in the past year. She blames a recently passed law signed by the president aimed at speeding up the time it takes to process veterans' claims. Smith says it's made her office "a stressful environment, because we've become a production environment. It's all about the numbers."

And it's not just rank-and-file employees feeling the crunch. Agencies are also missing some key upper-level political appointees. Max Stier, president of the nonpartisan Partnership for Public Service, says more than 200 senior positions remain unfilled one year into the president's term.

Trump has yet to formally nominate someone to head the Internal Revenue Service, as tax season begins, or the Census Bureau, which conducts the decennial count of the nation's population in two years. There's no ambassador yet to South Korea, or director of the National Counterterrorism Center. Stier likens it to a football game. "We are into the second quarter," he says, and "large parts of the offensive line and the rest of the team are not even on the field."

Trump has questioned the need for many of the vacant federal jobs, and referring to foreign policy openings, declared he is the "only one that matters."
Many other vacancies are being filled with acting administrators, which Stier says is the equivalent of substitute teachers, who may be "wonderful educators but they're not going to be respected by their charges nor by those around them."

Last year, Trump signed an executive action freezing the number of federal employees for the first three months of his administration, and he may be considering including a longer-term freeze with his budget recommendations. The problem with that, says Stier, is a freeze eliminates flexibility at government agencies. For instance, he says there are five times as many government IT workers who are over the age of 60 than there are under the age of 30. "That's not what you want to freeze in place," he says. "We need to be hiring cutting-edge young IT workers."

A freeze also means that those who leave federal employment through retirement or other reasons aren't always replaced.

Still, there are some encouraging signs. The Partnership's annual survey of the best places to Work in the federal government, has shown an improvement in how government workers view their leaders and their jobs for three consecutive years.

Robert Shea, a former official at the White House Office of Management and Budget in the George W. Bush administration, says the federal workforce is likely feeling "pretty harried," with talk of a hiring freeze and the recent three-day government shutdown, which he says is ultimately not good for taxpayers. Shea calls this a time of disruption, which he views as an opportunity for the administration "to find out how to provide services more efficiently and effectively."

But he says its "short sighted to bash folks who are being paid to work for the government and for the citizens."

"The happier they are at their job," Shea says, "the better work they're going to do for the American people."