Accessibility links
Dating Apps Can Help Older Adults Meet — No Time Machine Necessary Young people aren't the only ones logging on to find love. For Anna Fiehler, a 56-year-old newlywed, online dating helped her find love after her divorce — but it was not without its challenges. 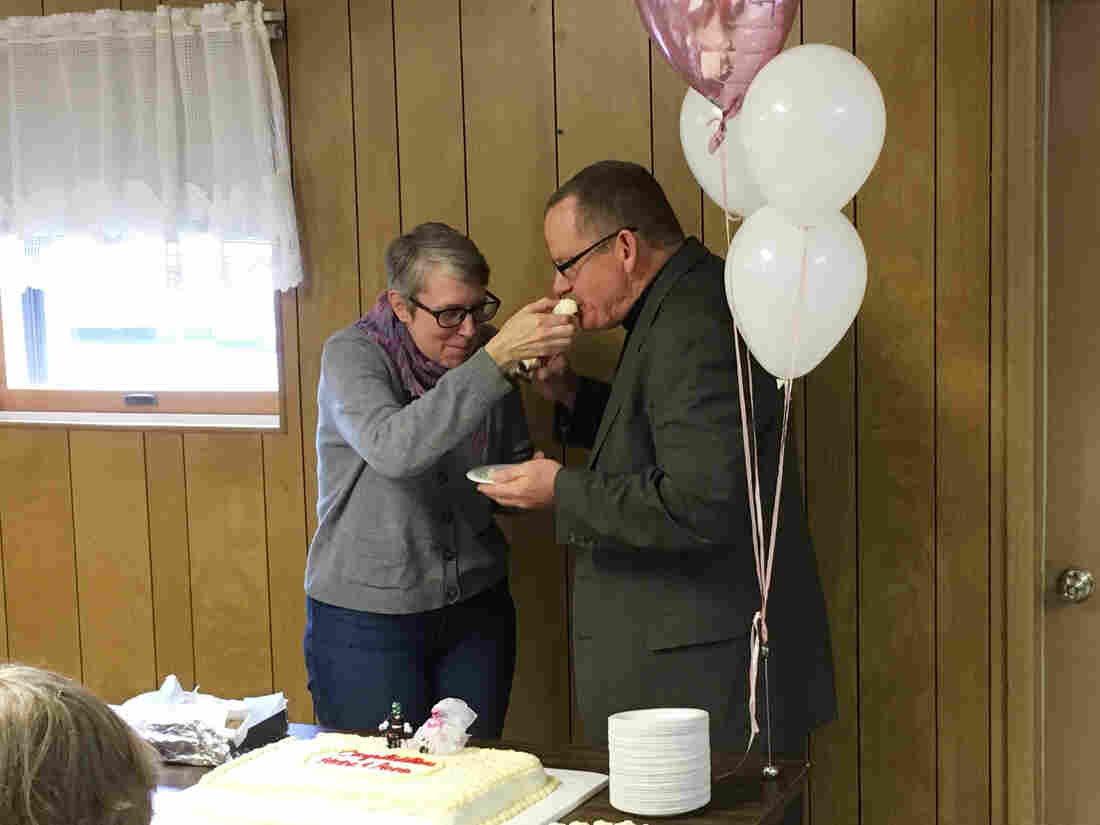 Anna Fiehler and Heinz Raidel met on Match.com and lived about two hours away from each other in Ohio. They married in early 2017. Courtesy of Anna Fiehler hide caption 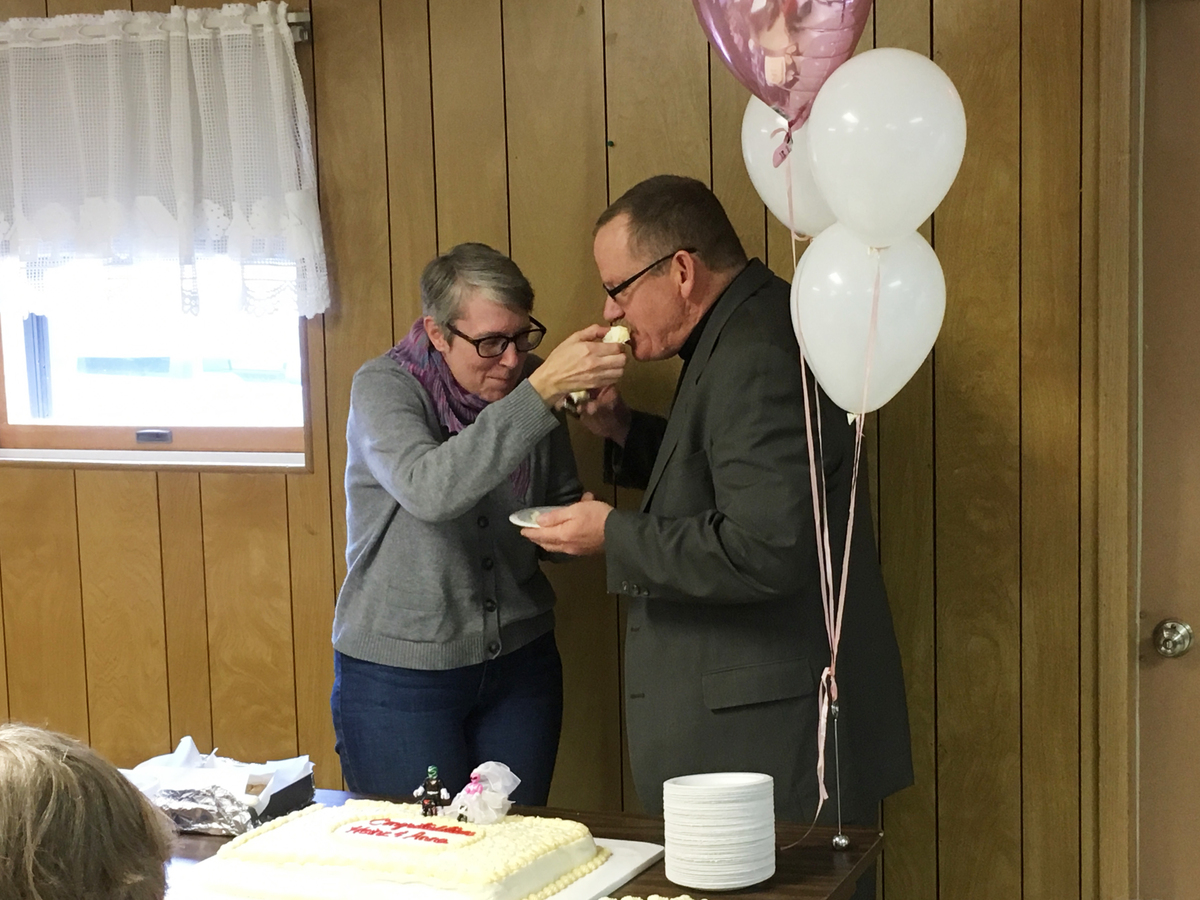 Anna Fiehler and Heinz Raidel met on Match.com and lived about two hours away from each other in Ohio. They married in early 2017.

Anna Fiehler, 56, jokes that she was one of the first people to date online. She may not be wrong.

The year was 1978. Fiehler, then a high school senior in Kettering, Ohio, was assigned to work at her high school's computer station. The station had a DECwriter II terminal which connected to a Hewlett-Packard 3000 in Dayton, Ohio. As it turns out, other students from different high schools were also connecting to this same computer system, and Fiehler began chatting with them.

She says that's how she met her senior prom date.

Given that experience, Fiehler says it was no surprise that she felt comfortable signing up for a dating site decades later in her 50s, after her first marriage ended.

The desire for companionship has led many older adults who are single, divorced or widowed to sign up for online dating. A Pew study found that from 2013 to 2015, the number of users aged 55 to 64 years old who dated online doubled from six to 12 percent.

The surge in older online daters has led to dating apps with a minimum age requirement. OurTime, Stitch, SeniorMatch and SeniorPeopleMeet all require users to be a certain age — usually 50 or 55 — to sign up, creating a more specific dating pool.

Many of these sited and apps focus on companionship, helping users find romantic partners, pen pals, friendships and communities.

"With my age, it was a little more challenging to meet single people at work," Fiehler says. 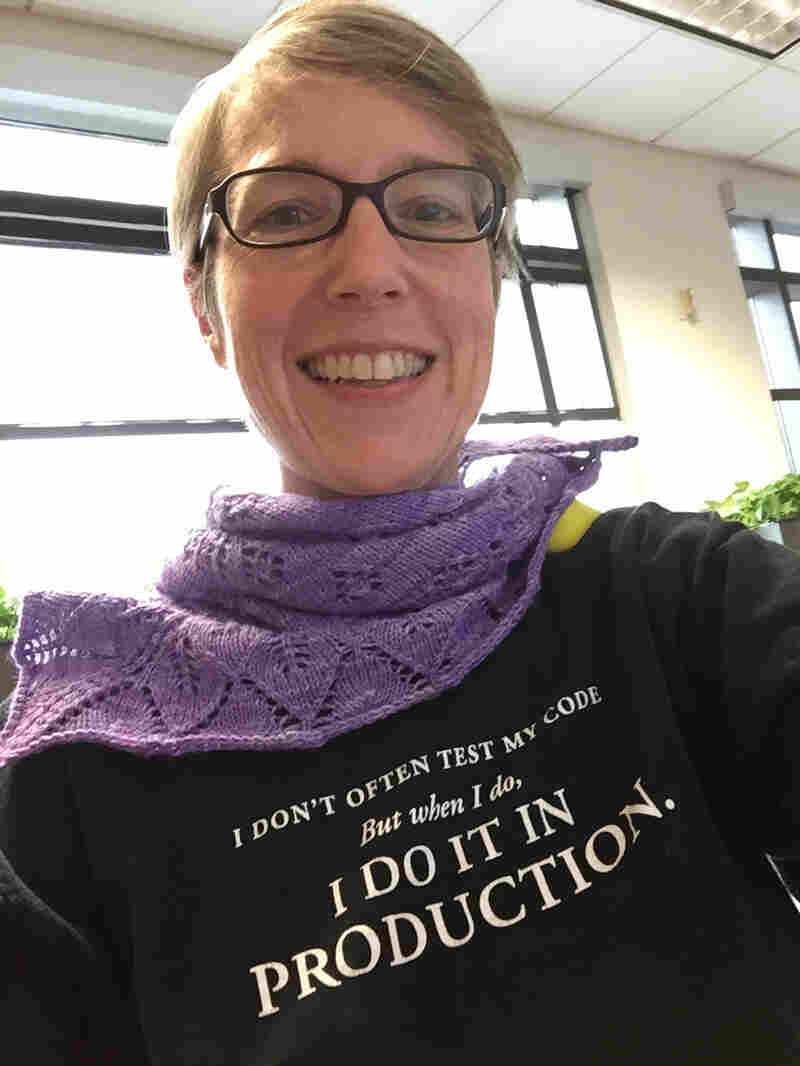 Anna Fiehler considers herself to be one of the first people to date online. She met her senior prom date in 1978 through chatting on an early computer. Courtesy of Anna Fiehler hide caption 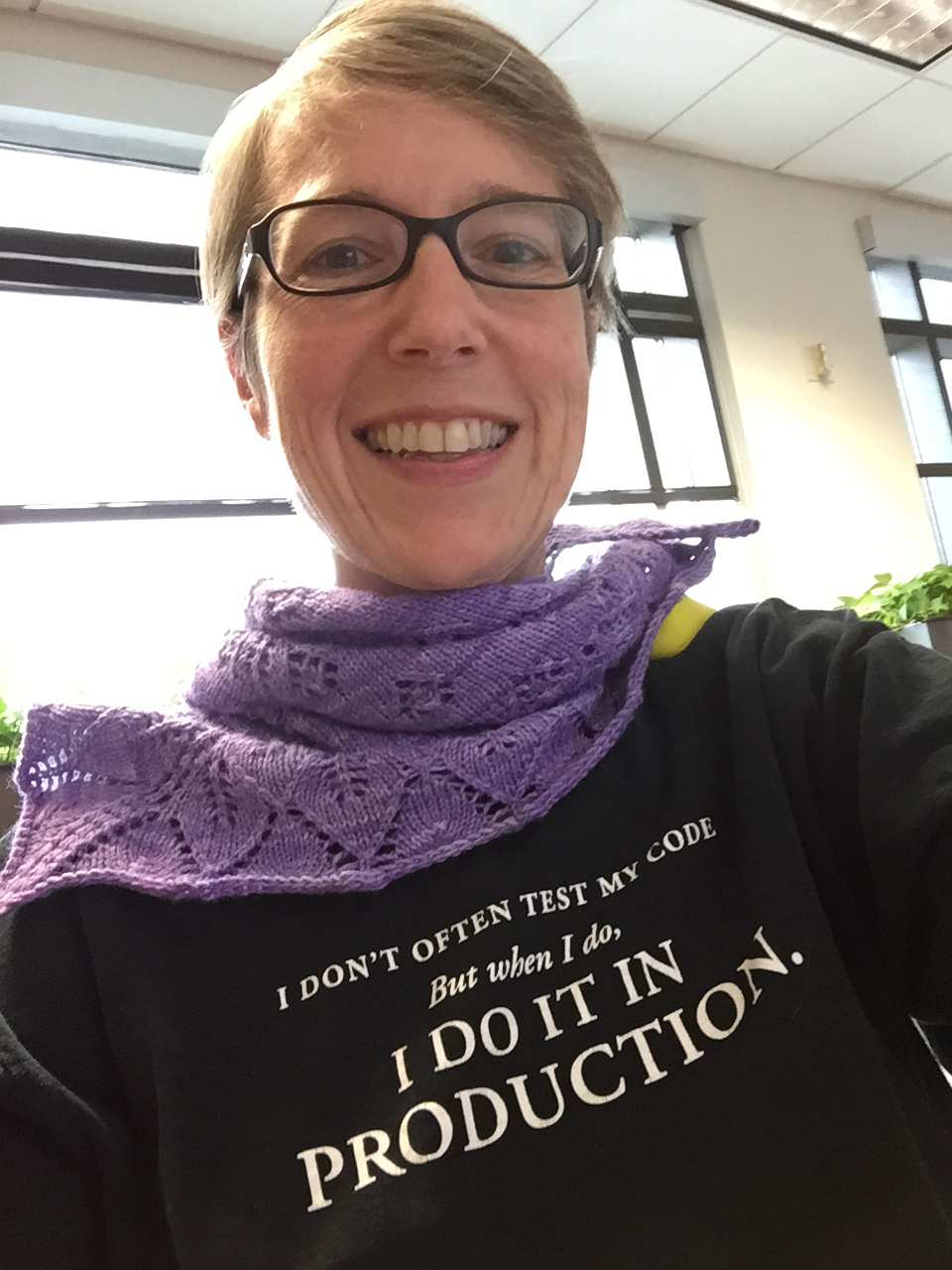 Anna Fiehler considers herself to be one of the first people to date online. She met her senior prom date in 1978 through chatting on an early computer.

Though she was comfortable with online dating, she says it didn't feel like everyone else her age was.

"It seemed to me that men in my age range tended to have relatively incomplete profiles," she says. "It was clear they weren't particularly sophisticated about either using social media or using computers in general."

Fiehler was disappointed. She had spent time crafting a profile that truly reflected her personality and interests, but says most men who messaged her focused on her looks, rather than common interests. She also says profiles she saw were woefully lacking in well-written, engaging details, or men here age were exclusively seeking out domestic, "traditional, God-fearing" women.

This initial experience was not unique to Fiehler. Women over 50 often report receiving unwanted sexual messages, according to a 2016 study from the Journal of Women and Aging. The study, which examined positive and negative perceptions of dating online in women over 50, found women often described a lack of responses as reason they would consider themselves unsuccessful online. The lack of messages sometimes led to feelings of disappointment and cancelling paid dating accounts, the study found.

Fiehler, for her part, kept at it, saying she still found an upside to online interactions that she didn't experience in more traditional ways of dating.

"The best thing about online dating was being able to have this kind of meeting of the minds first, and being able to see in what way you click," Fiehler says.

'This is going to be OK'

Fiehler says she appreciated being able to vet potential dates' personalities through messages and emails first before arranging to meet in person — another thing she shared in common with those who took part in The Journal of Women and Aging study. They reported a perceived a sense of safety while dating online, thanks to the ability to control the pace of the conversation and have the opportunity to build a level of comfort with matches before deciding to meet.

In addition to OurTime, Fiehler signed up for Match.com, and within a few hours she received a "like" from Heinz Raidel, now 59. Intrigued, Fiehler clicked on his profile. 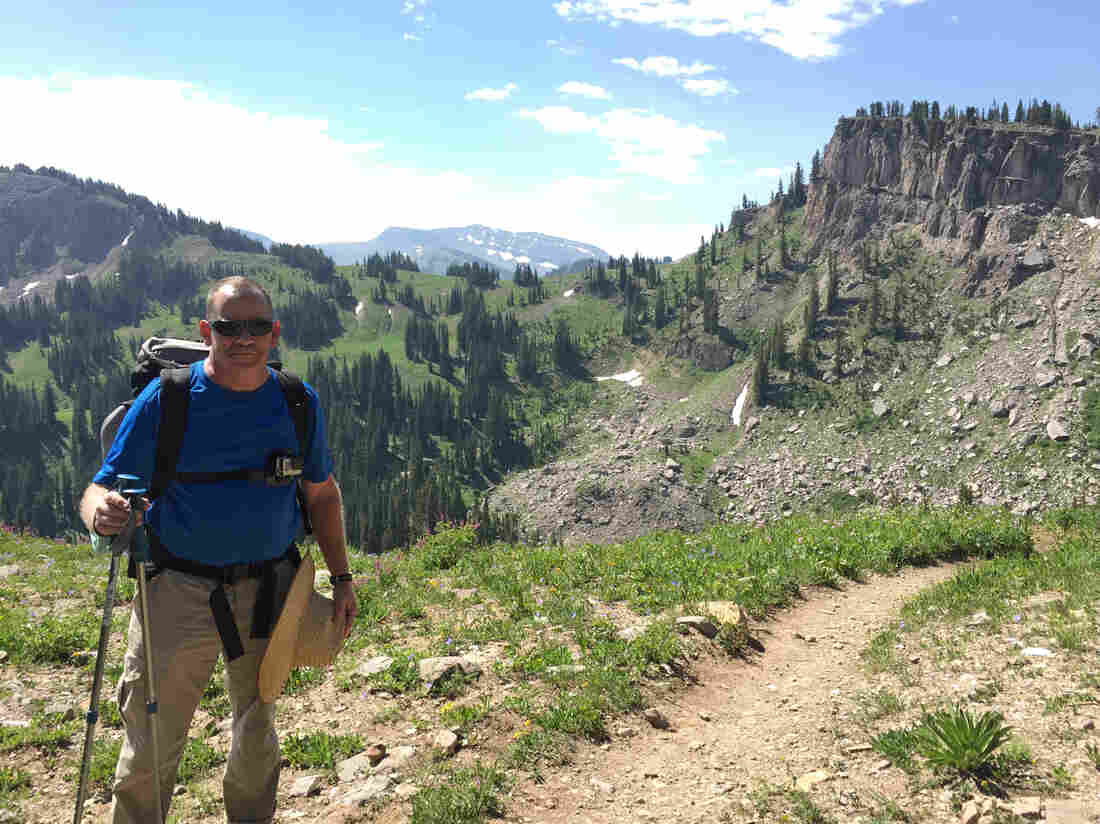 Heinz Raidel joked in his online dating profile that among his interests were "Time machines (I'm just checking to see if anybody's reading this far." Courtesy of Heinz Raidel hide caption 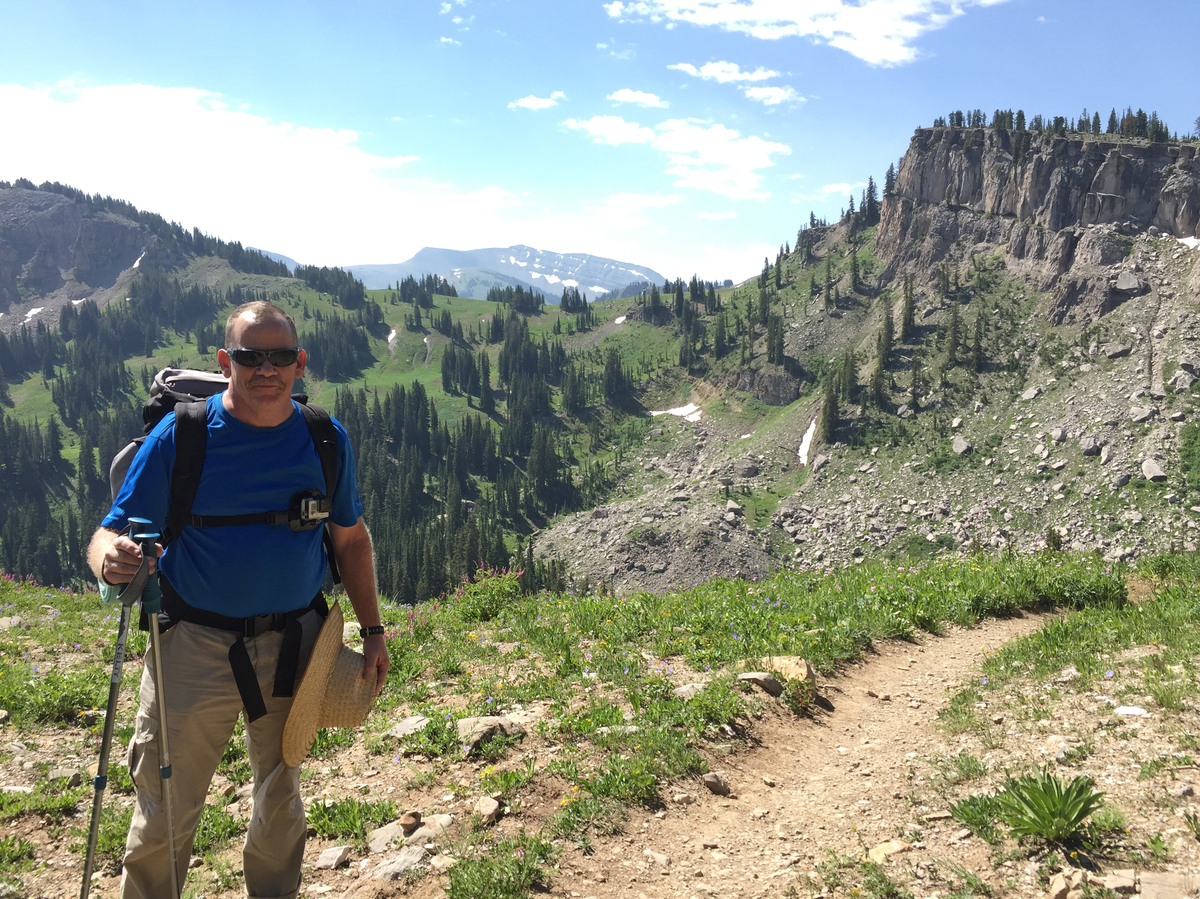 Heinz Raidel joked in his online dating profile that among his interests were "Time machines (I'm just checking to see if anybody's reading this far."

"It was probably one of the most entertaining profiles I had ever seen," Fiehler says, calling Raidel's words genuine and funny. Among a list of interests on his profile, he wrote: "Time machines (I'm just checking to see if anybody's reading this far)."

"That made me laugh," Fiehler says, so she wrote him back: "You have a time machine?"

"I wish I had a time machine so I could think up a clever response to your question," Raidel replied.

Fiehler and Raidel lived about two hours apart from each other in Ohio, so when they decided to meet, they picked a restaurant halfway between them.

"I can distinctly remember the first date because we described our cars to each other," she remembers. When his car pulled up next to her, she says she was sure their first date would be special.

"I remember looking over and him looking over at me and smiling and I just knew in my head, right then and there this is going to be OK," she says.

And it was. They talked so long during their date that they closed down the restaurant.

After a few months of meeting in the middle, Fiehler found a job closer to Raidel. They got married in early 2017.

Fiehler says that without online dating she would have never met Raidel.

"I think it's a real opportunity for folks over 50," she says. "The computer and these applications aren't isolating, they're actually providing incredibly rich connections for people ... and it can be really worthwhile."

Jeffrey Pierre and Alyssa Edes contributed to the broadcast version of this story.