Accessibility links
State Of The Union Guest List: Heroes, DREAMers And Bill Nye The guests offer a snapshot of the political messages that each party is hoping to highlight Tuesday. For Trump, the focus is on national security and law enforcement. For Democrats, it's immigration. 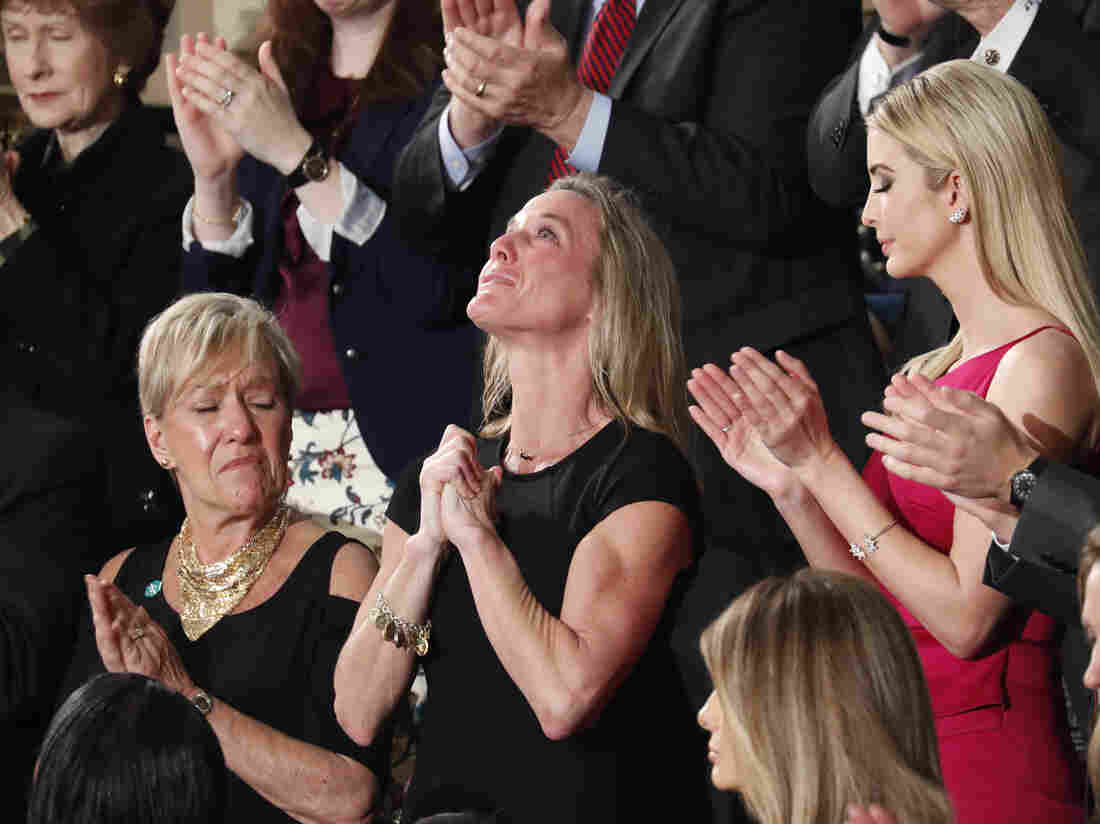 Carryn Owens, the widow of Navy SEAL William "Ryan" Owens, fought back tears as President Trump addressed her during his 2017 speech to a joint session of Congress. Pablo Martinez Monsivais/AP hide caption 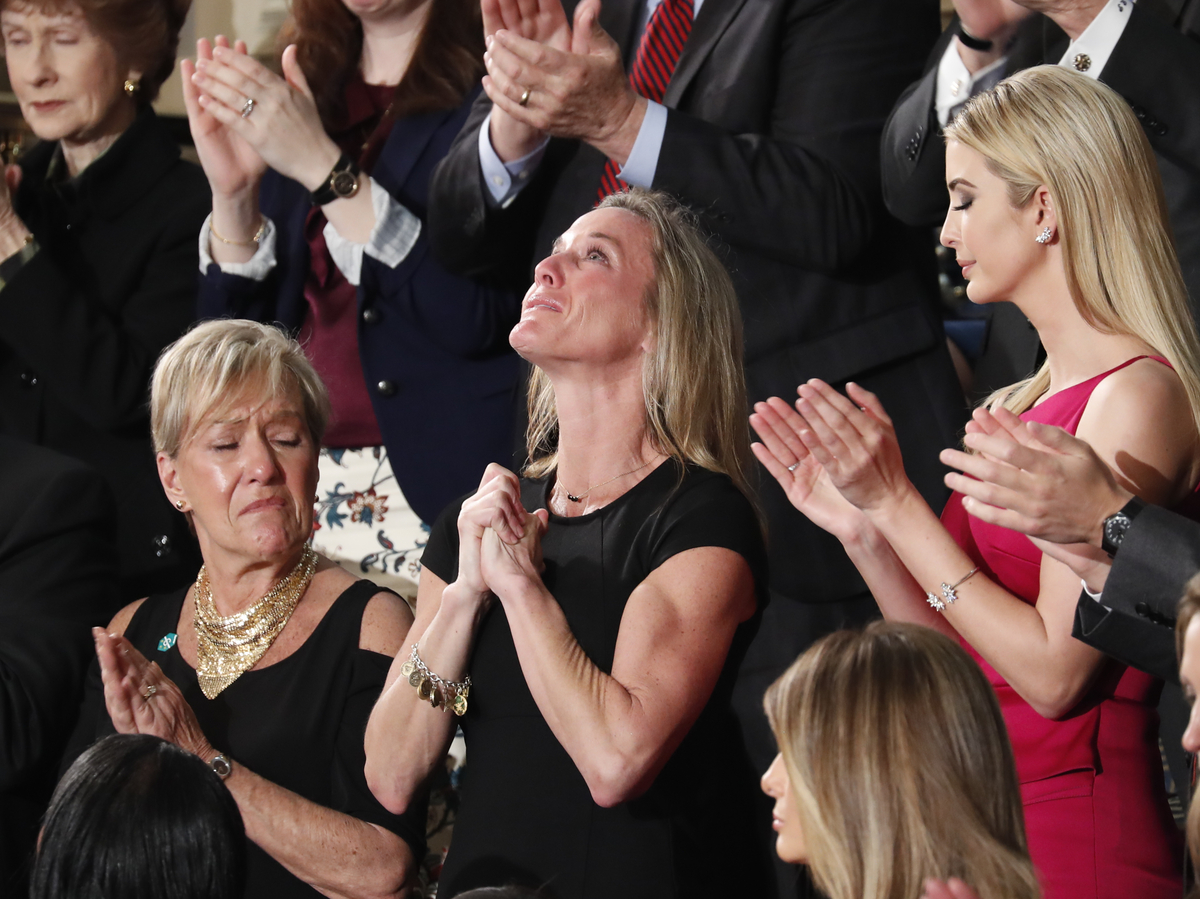 Carryn Owens, the widow of Navy SEAL William "Ryan" Owens, fought back tears as President Trump addressed her during his 2017 speech to a joint session of Congress.

President Trump's State of the Union speech Tuesday night is intended to outline the priorities of the nation, while guests of the president and of lawmakers reflect the political messages each party wants to highlight.

Trump has invited a list of law enforcement and military heroes, a reinforcement of his intended theme of "building a safe, strong and proud America."

Democrats, on the other hand, continue to try to steer the conversation toward immigration. Minority Leader Nancy Pelosi, D-Calif., and other Democratic leaders have invited dozens of undocumented immigrants who came into the country as children, also known as DREAMers. Without action from Congress, the roughly 700,000 recipients of the Deferred Action for Childhood Arrivals program would no longer be shielded from deportation.

"Some of these individual's stories are heroic, some are patriotic, others are tragic but all of them represent the unbreakable American spirit," White House press secretary Sarah Huckabee Sanders said on Monday, unveiling who would sit alongside first lady Melania Trump on Tuesday night.

Trump's most powerful moment in his address to Congress last year was his acknowledgement of Carryn Owens, the widow of a Navy SEAL killed in a controversial raid in Yemen.

Military and law enforcement: Retired Cpl. Matt Bradford is the first blind, double amputee to re-enlist in the Marine Corps. Ryan Holets, a police officer in New Mexico, adopted a baby whose parents were addicted to opioids. Army Staff Sgt. Justin Peck was part of a team clearing IEDs from ISIS territory in Syria last year. And Preston Sharp is a boy leading an effort to place American flags and red carnations on the graves of soldiers.

First responders: Jon Bridgers founded a nonprofit rescue organization that helped respond to the 2016 floods in Louisiana and to Hurricane Harvey last year. David Dahlberg, a fire-prevention technician, helped saved 62 people from a wildfire in Southern California last July. Ashlee Leppert is an aviation electronics technician in the Coast Guard who rescued dozens of people during last year's hurricane season.

Immigration: The president has sought to shine a light on the MS-13 transnational street gang, whom he called "animals" last year, in arguing for stricter border control. Elizabeth Alvarado, Robert Mickens, Evelyn Rodriguez and Freddy Cuevas are parents of children who were killed by members of the gang. They will be in attendance, as well as Immigration and Customs Enforcement agent Celestino Martinez, whose investigations have led to more than 100 arrests of MS-13 members.

As Trump Prepares For Big Speech, State Of The Economy Is Strong

Economy: As a nod to the tax cuts approved by Congress in December, the president invited Steve Staub and Sandy Keplinger, who started Staub Manufacturing Solutions 20 years ago. According to the White House, the company offered larger bonuses as a result of the tax plan. Corey Adams, a welder at the company, will also attend.

As shown by the government shutdown earlier this month, which ended with a promise from Senate Majority Leader Mitch McConnell to bring immigration legislation to the floor, Democrats want the DACA issue front and center.

Dozens of young immigrants will be sitting in the House gallery, guests of Pelosi, Minority Whip Steny Hoyer, D-Md., and other lawmakers.

A number of Democratic lawmakers are also calling attention to the #MeToo and #TimesUp movements related to sexual harassment. Among them is Rep. Ann McLane Kuster, D-N.H., who is bringing Chessy Prout, a sexual assault survivor whose case yielded national media attention.

At least 10 Democrats have chosen to boycott the event completely, according to a list compiled by USA Today.

"We are watching the presidency erode before our eyes and I, for one, refuse to participate in pomp and circumstance that does nothing but normalize his egregious and hateful behavior," Rep. Bobby Rush, D-Ill., said in a statement.

Bill Nye the Science Guy will also be in attendance as the guest of Rep. Jim Bridenstine, R-Okla.

It's an interesting pairing, considering Bridenstine's history of denying humans' role in climate change and Nye's role in expanding knowledge on the subject and criticism of climate change deniers.

Bridenstine, however, has changed his tune in recent months, after he was nominated by Trump to lead NASA. In his confirmation hearing, the congressman acknowledged that "humans are contributing" to climate change.

"He's changed his mind, and in science that's generally a good thing," Nye told Quartz. "I am hopeful that others will see the wisdom in the Congressman's evolving view and follow suit."

Tomorrow night I will attend the State of the Union as a guest of Congressman Jim Bridenstine – nominee for NASA Administrator – who extended me an invitation in my role as CEO of The Planetary Society....

…The Society is the world’s largest and most influential non-governmental nonpartisan space organization, co-founded by Carl Sagan. While the Congressman and I disagree on a great many issues – we share a deep respect for NASA and its achievements...