Accessibility links
Koch Brothers, Behind Tea Party Wave, Face Democrats' Rising Tide In 2018 The libertarian political network is rallying donors with a $400 million plan to support Republicans and fend off Democratic gains in the midterm elections. 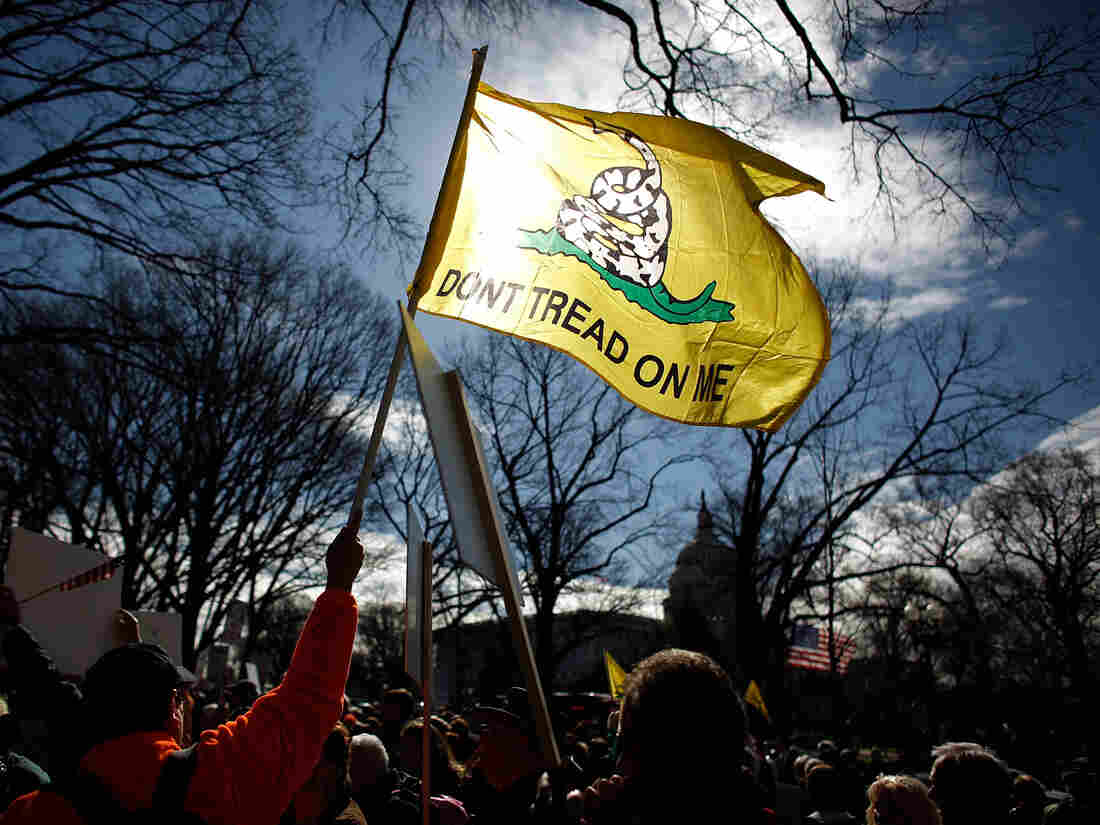 Tea Party activists hold a rally on Capitol Hill in 2010. That grassroots movement, with backing from the Koch political network, helped Republicans win back the House in the 2010 midterms. In 2018, the Koch network is on defense against Democratic gains. Chip Somodevilla/Getty Images hide caption 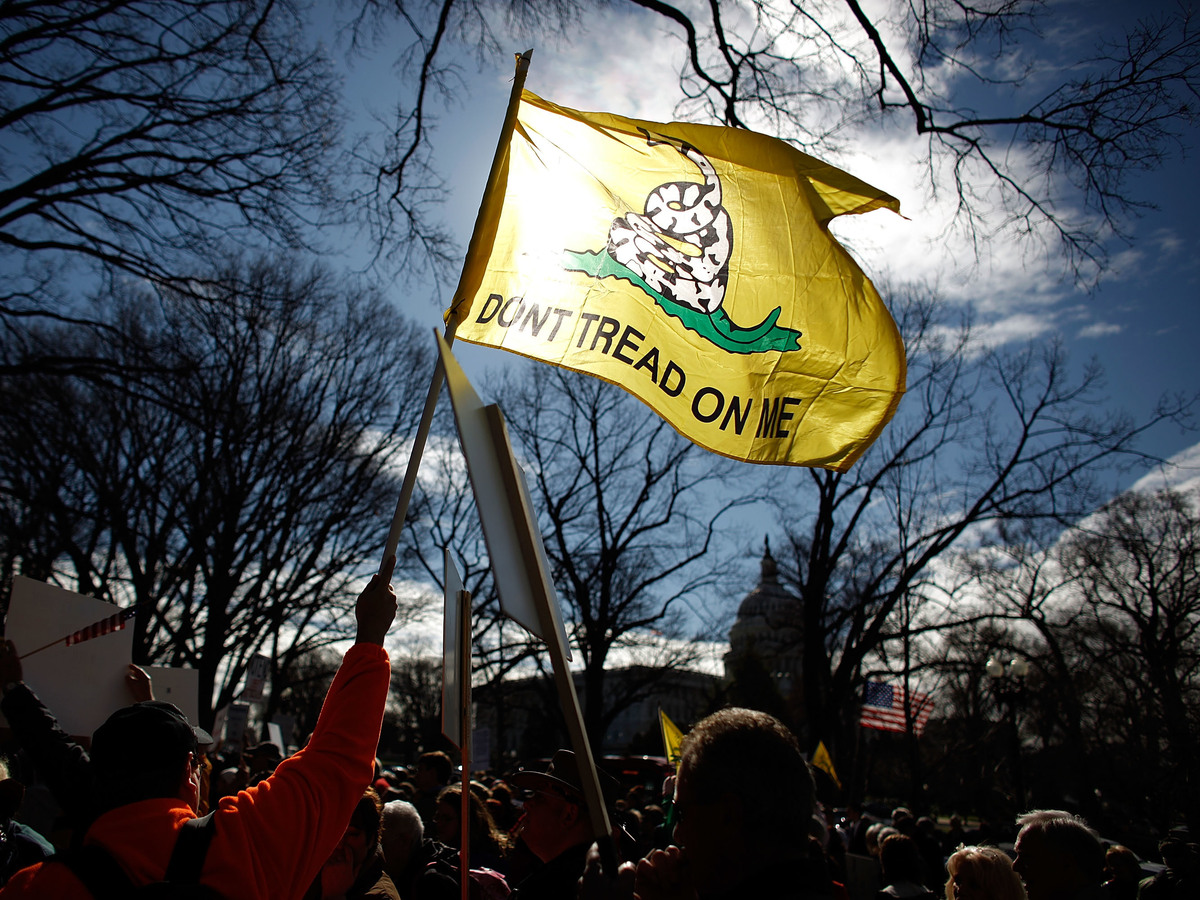 Tea Party activists hold a rally on Capitol Hill in 2010. That grassroots movement, with backing from the Koch political network, helped Republicans win back the House in the 2010 midterms. In 2018, the Koch network is on defense against Democratic gains.

In 2010, the right benefited from historical trends: Midterm elections are traditionally disastrous for the president's party. Close to a decade later, the wave is rolling back in.

"You're just going against the tide. You're going against history, which makes it a little tough," quipped network official Tim Phillips, president of the grassroots organization Americans For Prosperity.

The topic of how to defend the conservative majority was all the buzz over the past few days as some 550 well-heeled donors gathered at the palatial Renaissance Esmeralda near Palm Springs, Calif.

"The energy that you saw [on the right in 2010] is on the left right now" and the prospects "are scary," donor Christopher Wright, the CEO of Liberty Oilfield Services, told NPR. "We moved the freedom ball forward a fair bit in 2017, but that could come nearly to an end if Democrats take control of the House and/or the Senate. Very real chance that happens."

The network, which includes 700 high-dollar donors who contribute at least $100,000 annually, is a powerful force in the American political landscape promoting libertarian economic and social policies. And they're gearing up to spend big money — scowling in the face of what could be an electoral tsunami if history is a guide.

Facing this challenging midterm environment, the Koch network will spend nearly $400 million over the 2018 cycle to defend conservative policy gains from last year. This is 60 percent higher than they spent in the 2016 election cycle, which included a presidential campaign.

This commitment is also an order of magnitude higher than what their network of conservative and libertarian donors contributed in the 2010 election — a campaign during which billionaire brothers Charles and David Koch burst into the national consciousness as villains for the left, due to their millions in funding for free market causes.

It all seems so quaint now. During the 2010 cycle, the Koch network spent a comparatively meager $125 million to influence American policy and politics.

Cautiously at first, the Koch network eventually embraced the Tea Party movement during its ascendence.

"There was massive, massive opposition to Obamacare as it was in the works [in 2009 and 2010]... that definitely got the conservative grassroots really amped up and energized to knock on doors to get the message out, and ultimately to hold elected officials accountable for a poor decision," said Koch network spokesman James Davis. "Now is a very different environment. But there's still enthusiasm [on the right], I don't want to overlook that."

Their plan this year is to drive the right's enthusiasm up by highlighting the GOP-controlled Congress' only major legislative achievement — a massive tax cut bill, which also zeroed out Obamacare's individual mandate.

"In [the Obama] years, we were really explaining just how terrible Obamacare was... our job [now] is to explain why these tax reforms are benefitting a lot of people, why getting good judges through helps the quality of life in America, why veterans administration reforms protects one of our most precious assets," Phillips said, regarding the about-face change in circumstances.

The Koch network plans to spend at least $20 million on telling voters about the benefits of Congress' tax legislation through paid television advertisements, digital efforts and town halls. And that's on top of the $20 million they already spent advocating for the tax efforts to pass.

The Tea Party protests in 2010 were driven by anger at government spending and the perceived flaws of the health care law. But with Republicans in power, the energy has diminished from that movement's heyday. Gone are the raucous rallies, and in many places Tea Party marches have been replaced by events like the Women's March.

"There's this emotional component [to supporting tax reform] there that's every bit as emotional, every bit as powerful as the emotions around why Obamacare was so bad for people," Phillips insists. "There's emotion on both sides, and our job is to make sure we drive that."

But the political right may soon confront, electorally, how much harder it is to take credit than it is to cast blame.

"It's a more sophisticated sell, which means it's a harder sell," Wright said.

There's no denying that the momentum is with the other party — and they don't deny it.

"We acknowledge the left is energized right now. There's no question about that. It's not just marches and such that they're doing. It's showing in some of the recent elections," Phillips said.

And if they get swept away by a Democratic wave this November? The Koch network's spokesman argues that it is still worth spending hundreds of millions to blunt the left's momentum.

"We're focused on the long term. A political committee or candidate might take that approach, of not spending money because they're inevitably going to lose," Davis said. "Even in ads that we would run or efforts that we'd be making in the field today for a candidate, they're going to be around particular issues. So we're still educating, in that process, educating the American people on the principles and the values of how that particular public policy change will help improve their lives."

In opposition, the conservative movement was unified in its criticism of Obamacare. But the details of governing have highlighted fault lines that were less evident during the Obama administration.

Free trade, once an orthodoxy on the right, is now in question. Comprehensive immigration reform, around which a large number of business-minded Republicans agreed was necessary, now seems like a distant memory.

And then, of course, there is the matter of Trump.

"Trump gives [the left] plenty of fodder to oppose, and to arouse people's emotions, and to energize people. They probably have an easier sell this year than Republicans or 'Team Freedom' does." Wright said.

In tone and in policy, the Koch network draws a contrast with the Trump administration. And it is keeping with the network's early roots in the 2000s as a free-market voice challenging the Bush administration from the right, for what some conservatives saw as out-of-control government spending.

The president and the libertarian-leaning Koch network diverge on a number of areas, and the contrast is clear at the conference.

The Koch network preaches openness on immigration ("immigrants are essential to the success of our country," said one official); a respect for the press (essential for a "free and open society," another official preached to the hundreds of assembled activists); and a second chance for felons (the criminal justice system is morally indefensible, constitutionally dubious and fiscally ruinous, according to a top Koch network lawyer).

But network officials don't much want to directly discuss the president. They shake off questions about Trump's rhetoric and popularity; and pivot to talking about, well, tax cuts.

"We don't get involved in personalities, and all the other stuff. That's just not what we do as a network. We focus on explaining to you the problems with certain policies... or we focus on, 'Hey these are good policies, and here's why they're good,'" Phillips said.

Editor's note: Nine years ago, this reporter received a ten-week fellowship with what was then a Koch-affiliated organization, the Institute for Humane Studies at George Mason University.