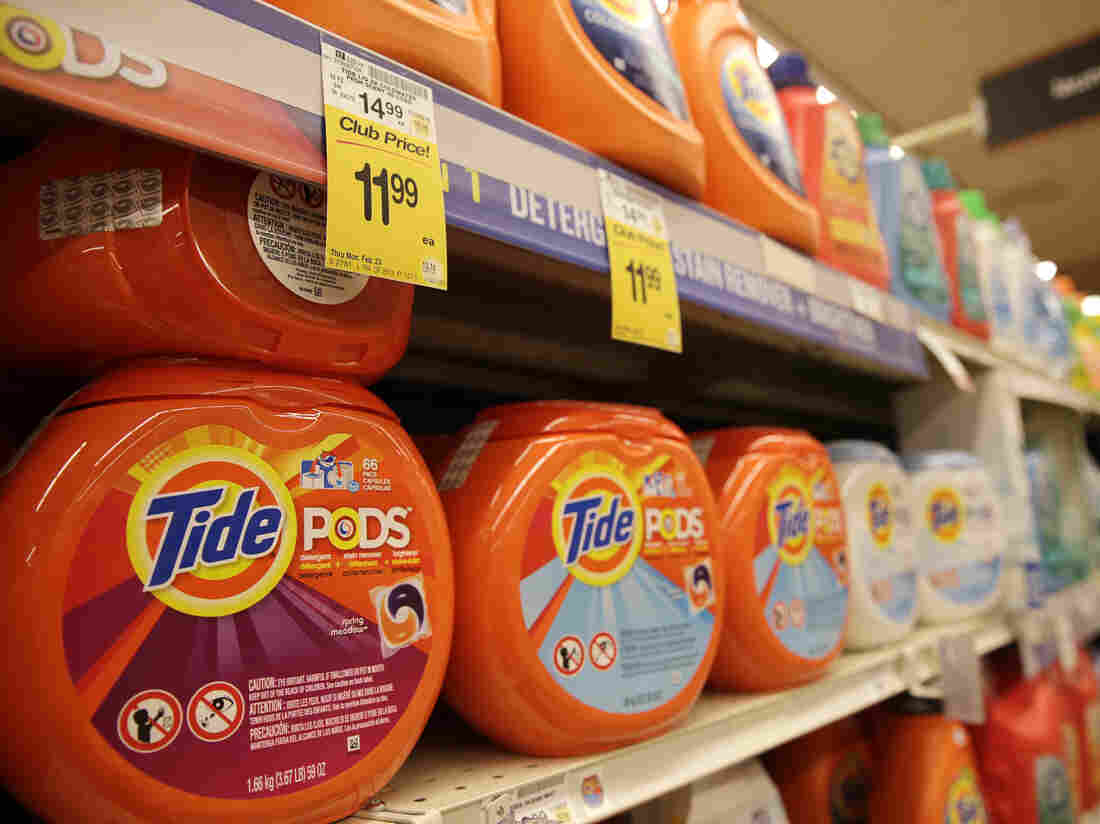 Tide detergent pods, from Procter & Gamble, are seen at a Safeway store in Wheaton, Md., in 2015. The pace of poisonings in the so-called Tide Pods Challenge is continuing to grow. Gary Cameron/Reuters hide caption 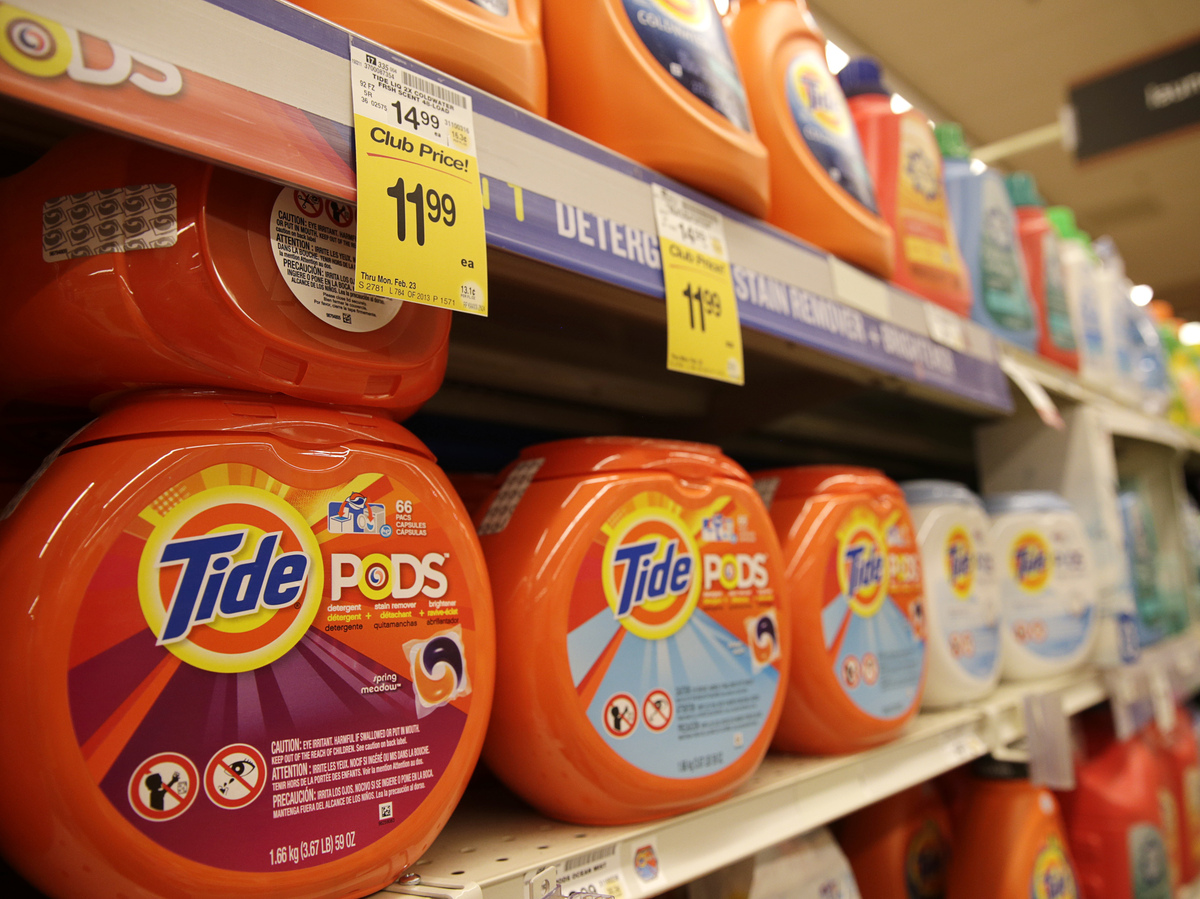 Tide detergent pods, from Procter & Gamble, are seen at a Safeway store in Wheaton, Md., in 2015. The pace of poisonings in the so-called Tide Pods Challenge is continuing to grow.

If you've never seen it, a Tide Pod looks like a little rounded packet, white with two separate swirls of blue and orange liquid.

To be clear, a Tide Pod is laundry detergent heavily concentrated into a single packet, meant to dissolve in water and clean a single load of laundry. But these days, it's a dare — an Internet meme, in which teenagers try to eat Tide Pods as a "challenge."

The trend picked up in December, but the pace of poisonings is still getting worse. So far in January alone, poison control centers have received 134 reports of "intentional exposures" to laundry packets, Tide or others. That's compared with 53 cases the American Association of Poison Control Centers reported for all of 2017, mostly involving teenagers.

Potential effects include seizures, respiratory arrest, coma and even death, according to the poison control association. If you or someone you know is hurt — or if you have a question — call the national Poison Help hotline at 1-800-222-1222.

Part of the shtick around the bizarre phenomenon, now known as the Tide Pod Challenge, is commentary on the appetizing look of the Tide Pods. Satirical sites the Onion and College Humor have both lampooned the candy-like appearance of the packets over the years. Lately, some chefs and bakers have started replicating the design with frosting or food coloring on donuts, pizzas and other food items.

But Damon Jones, spokesman for parent company Procter & Gamble, says it's a stretch to blame the design for the dangerous trend.

"That's not our focus," he said of any potential design changes for Tide Pods. "Our focus right now is educating consumers about the proper and safe use of household products," he says. The company's efforts include outreach to college campuses for "honest conversations" with students and a partnership with social media companies to stop the spread of the videos.

Previously, Tide Pods drew national attention — and criticism of their design — when young children became ill after putting them in their mouths. Every year, poison control centers get more than 10,000 of reports of children accidentally getting their hands on laundry packets.

Procter & Gamble has responded by making the container opaque, and coating the packets in a thicker plastic that's harder to bite through as well as a very bitter substance meant to prompt a child to spit it out.

But the Tide Pod Challenge is different. It involves grown children knowingly choosing to bite into a packet clearly advertised as laundry detergent, which is obviously toxic.

"I think there's a clear distinction between an accidental ingestion by someone who is making an honest mistake versus people who, I would argue, should know better about putting household cleaners in their mouth," Jones says. "Many people are doing this not seriously, they're doing this jokingly. ... This is clearly a case of a joke gone too far."

But why would a laundry packet be designed so candy-like to begin with?

Designs like this are never willy-nilly, says Chris Livaudais, executive director of the Industrial Designers Society of America. The process starts by studying the habits of a potential user to find ways to make their life better in some way. In this case, the condensed formula does away with a heavy jug and the need for measurement.

Beezin' May Be Bogus, But Other Dopey Teen Fads Can Bite Back

And package design "plays into the psyche of the person shopping to see a product and believe in its value and use it," Livaudais says. In other words, we shop with our eyes — even for laundry detergent.

The colors are already associated with liquid detergent, Livaudais says. And the swirls "might imply how active the ingredients are and how well it would do the washing job."

Jones says the swirls were indeed a design choice — indicating that the pod brings together three ingredients (cleaning, stain-fighting and brightening, he says). The pod is transparent because customers have told Tide they like to know what they're putting into the wash with their clothes.

Livaudais says industrial designers spend a lot of time mulling best and worst case scenarios for the use of products. But if someone knowingly chooses to misuse them? "That's completely out of our hands," he says.