Accessibility links
LBJ Shares The Spotlight — Finally — In 'Building The Great Society' Lyndon Baines Johnson was an outsize character who gets a lot of credit for his adminstration's successes — but he didn't do it alone, and Joshua Zeitz' new book looks at his most influential aides.

LBJ Shares The Spotlight — Finally — In 'Building The Great Society'

LBJ Shares The Spotlight — Finally — In 'Building The Great Society' 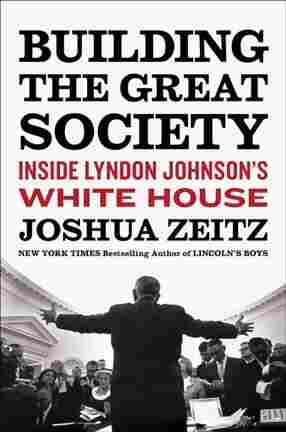 If you spend enough time in Texas, you're likely to hear several stories about President Lyndon B. Johnson, the man who brought the Lone Star State to a Washington, D.C., that wasn't quite sure it wanted it.

Here's one of them, which I heard from my grandfather more than 20 years ago: LBJ, having finished his time in the White House, was speeding along the back roads of the Texas hill country, when he was pulled over by a state trooper. The patrolman walked up to the car, and his jaw dropped when he saw the man behind the wheel. "Oh, my God," he said. "And don't you forget it, son," replied LBJ, who promptly sped away.

The tale is almost certainly apocryphal, but it's believable precisely because of Johnson's outsize reputation as a man assured of his greatness and unaccustomed to sharing the spotlight. Even if it weren't for his accomplishments, his ego would have been enough to make him a legend. But as Joshua Zeitz points out in Building the Great Society, "One man could not and did not go it alone." Zeitz's book is a fascinating look at the White House aides who turned Johnson's sprawling visions into a reality that forever changed the United States.

Zeitz's book starts where it has to — in Dallas, on Nov. 22, 1963, after the assassination of John F. Kennedy. Everyone can conjure up the famous photograph of a stone-faced Johnson being inaugurated on Air Force One; also depicted in the photo are Jack Valenti and Bill Moyers, two of the men who would go on to be among LBJ's most influential aides. The pair were part of what Zeitz calls "an ad hoc staff that defied the expectations of even the most cynical Washington hands."

Zeitz goes on to chronicle the conception of the "Great Society" (a term that Johnson, according to Moyers, never really cottoned to), which started with a tax cut that led to a period of prosperity that shocked cynical observers at the time. The expansive program later encompassed a push for civil rights for African Americans, a cause to which Johnson came rather late. (After signing the Civil Rights Act of 1964, Johnson told Moyers he was afraid the law would cause the South to go Republican "for a long time to come." He was, of course, correct.)

While Zeitz doesn't begrudge Johnson credit for his ambitious program, he's careful to spotlight the aides who — "skilled in the art of throwing a sharp elbow or building an administrative empire, and hungry for position and prominence" — did the heavy lifting. There was Sargent Shriver, tasked with waging the "War on Poverty," which gave birth to Project Head Start. There was Moyers, "the resident White House moralist," who served as press secretary, sweet-talking a skeptical media that had long harbored doubts about Johnson's abilities. And there was Douglass Cater, who served as the president's liaison to the Department of Health, Education, and Welfare, the agency responsible for implementing Medicare and desegregating the public schools.

It would be easy for a book like 'Building the Great Society' to turn into a jumble of names, numbers and acronyms, but that's a trap Zeitz deftly avoids.

It would be easy for a book like Building the Great Society to turn into a jumble of names, numbers and acronyms, but that's a trap Zeitz deftly avoids. To be sure, he's a policy wonk, but he's also an engaging author — there's a lot of information in the book, but it never descends into inside-baseball nerdery.

That's due, in part, to Zeitz's interest in LBJ and his aides as human beings, and not just agents of history. We learn that Valenti, a Texas businessman who served as one of President Johnson's first aides, was such a fan of books that he had a machine installed in his shower so he could read while bathing. And we learn that Johnson essentially taunted Shriver (one of the rare Kennedys who could stand LBJ) into spearheading the War on Poverty: "You've got the power," Johnson sneered. "Now you may not have the glands." A defensive Shriver replied, "I got plenty of glands" — and then accepted the job.

Building the Great Society is endlessly absorbing, and astoundingly well-researched — all good historians do their homework, but Zeitz goes above and beyond. It's a more than worthwhile addition to the canon of books about Johnson, "both a towering historical figure and a bundle of jarring contradictions," and the often-unsung cadre of aides who made him the president he was.