Accessibility links
In New York, Gun Owners Balk At New Handgun Database A plan to have gun owners in New York register their handguns has sparked anger. State officials say a database will help keep guns out of the hands of people who legally shouldn't have them. 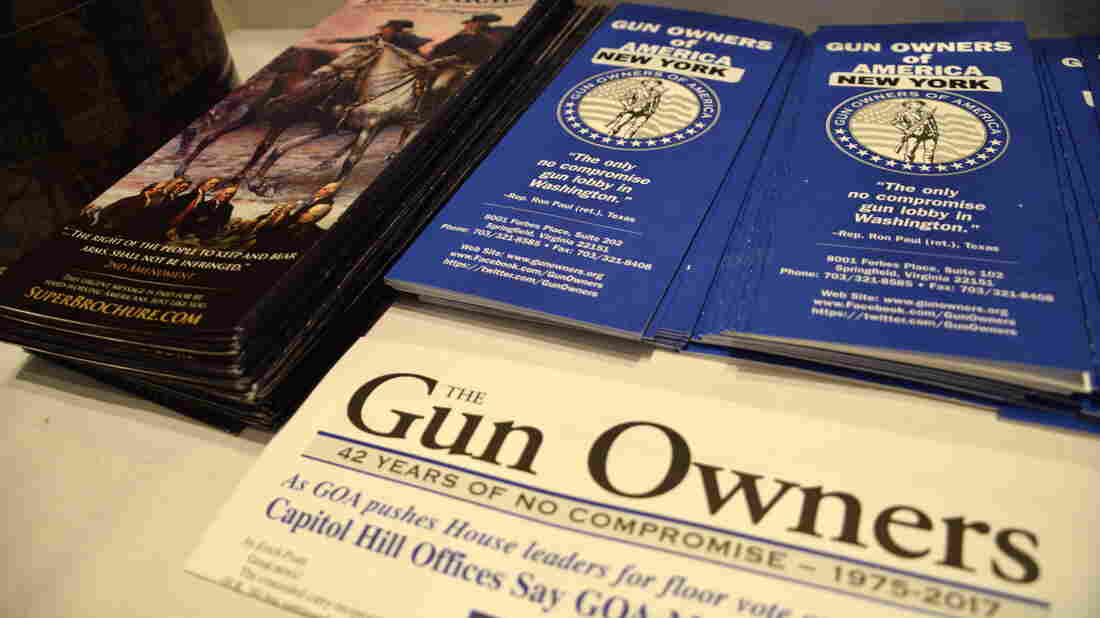 The Gun Owners of America – which has been described as a more extreme version of the NRA – recruited members for its New York chapter at the Albany Gun Show. Lauren Rosenthal/NCPR hide caption 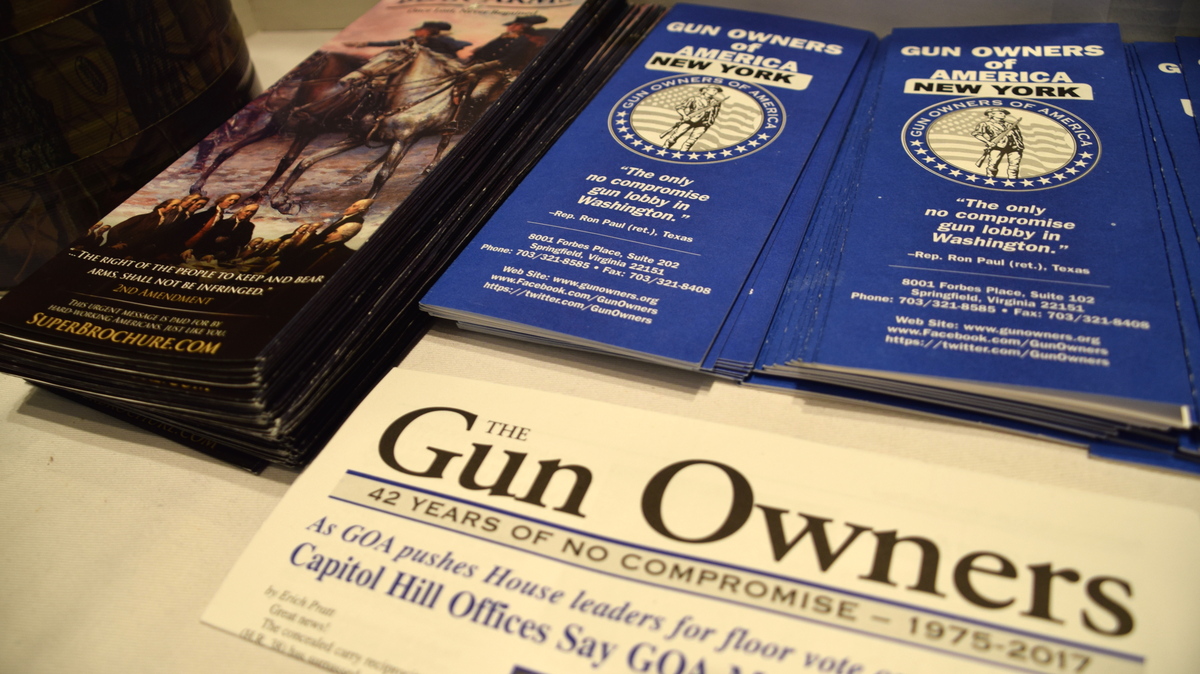 The Gun Owners of America – which has been described as a more extreme version of the NRA – recruited members for its New York chapter at the Albany Gun Show.

What It Takes To Get Guns Out Of The Wrong Hands

This week marked the official deadline for more than 370,000 handgun owners in the state of New York to register those guns with state police. New York is trying to use that information to build a comprehensive record of gun owners — something only one other state has done. The database that California started in 2007 has gotten mixed reviews.

New York Gov. Andrew Cuomo, a Democrat, has said he wants to make sure that people who can't legally own guns – those with criminal convictions, serious mental health issues, or active restraining orders — aren't somehow falling through the cracks and holding onto their firearms.

Anyone who took out a handgun license in New York before 2013 — the year the state passed a landmark gun control law — had to contact state police by Jan. 31 or risk criminal charges. That's caused a real backlash, particularly among rural gun owners, who don't entirely trust their state's intentions.

The Albany Gun Show is a winter fixture in upstate New York. On the show's opening day in mid-January, Tom King, president of the NRA-affiliated New York State Rifle and Pistol Association, posted up beyond all the folding tables stacked with rifles and holsters.

King said he spent hours and hours answering a question that seemed to be on everyone's mind. "People are saying, 'Do I have to register or don't I have to register?' So yeah," King said. "There is a lot of confusion."

The confusion, he said, is about why the state of New York wants information for its new handgun database. It's actually been on the books since 2013.

"We'll have for the first time a statewide handgun database that will allow the state, allow local officials to check periodically," Cuomo said. The plan lawmakers approved calls for detailed information on hundreds of thousands of legally licensed handgun owners and their weapons – down to make, model and serial numbers. Some of that information was already available on gun permit applications filed at county clerk's offices across the state, but it was often outdated or incomplete.

State police will build a database they can check against criminal records, alerts filed by mental health professionals, and restraining orders. Only law enforcement can see the information, not the public.

Cuomo described it as a system based on commonsense. "You don't want criminals and people who are mentally ill to have guns," he said. Once the law passed, state police began collecting information from every person who applied for a new handgun permit.

"You can't make them criminals."

The SAFE Act has been popular in urban areas, according to polling data. But some rural gun owners have resisted from the beginning. As the first big handgun registration deadline approached this winter, for people who got their guns prior to 2013, the pushback grew more intense.

Talk radio host Bill Robinson has lashed out at the state on "The Second Amendment Radio Show," which he hosts for a small station near Rochester. "The government shouldn't have master lists of us gun owners and the specific guns we have," Robinson said on a recent episode. "They don't need it!"

A lot of gun owners are angry. While they can agree that so-called "bad guys" shouldn't have access to weapons, some fear that New York is trying to turn them into those bad guys. It goes back to the penalties associated with this registration process. The SAFE Act says failure to register handguns is a felony offense — and gun permits are automatically revoked.

"You just can't do that to people that live in your state, that are lawful gun owners," Tom King said. "You can't make them, overnight, criminals."

King is most worried about those who had handguns before the 2013 law went into effect, but all handgun owners will have to check back in every five years.

As of the deadline, more than 81,000 people – or 20 percent of affected handgun owners in New York – haven't responded to the state's request. But New York State Police spokesman Beau Duffy argues that concern about this gun database has been overblown. He said felony charges are off the table for now. "We're not going to take criminal enforcement action, particularly with those people who were unaware of this re-certification process," Duffy said.

The next big question is how this registry is going to be used and who's going to follow up with gun owners. Laura Cutilletta, legal director for the Giffords Law Center to Prevent Gun Violence, believes it could be a game-changer for police. 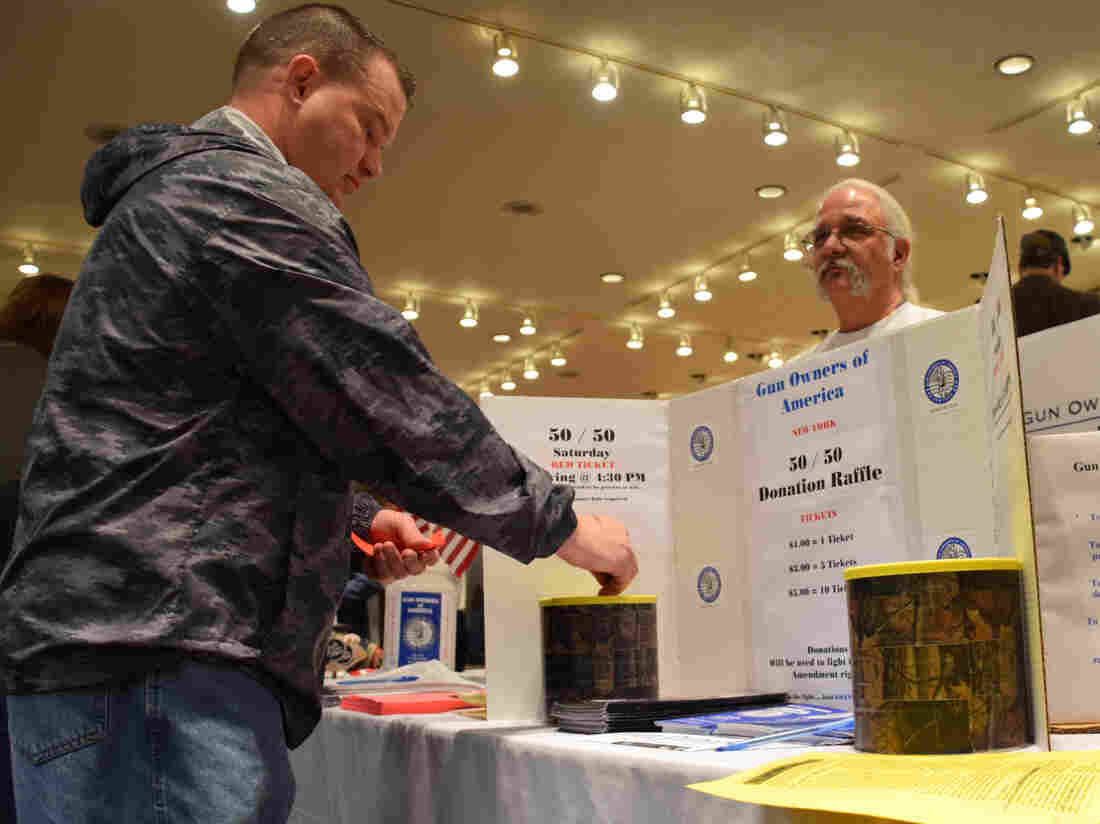 Ray Kosorek, center, sells a raffle ticket to Shawn Latour, left, at the Gun Owners of America booth inside the Albany Gun Show in January. The Gun Owners of America is a hard-line gun rights group that only recently expanded to New York State. Kosorek says they're hoping to dismantle the state's gun control laws in court. Lauren Rosenthal/NCPR hide caption

"This kind of tool seems like something law enforcement would really welcome and would make a priority if they can," Cutilletta said. "Because to know who is determined to be dangerous already and has a gun — I mean, what better information could you give law enforcement than something like that?"

But Cutilletta doesn't think these systems will start popping up nationwide. They're too expensive, she said. New York set aside $28 million for its database, and California tucked away $24 million.

Instead, Cutilletta said, she and other gun control advocates are pushing for new kinds of restraining orders – called "extreme risk protection orders." They allow families and police to take their concerns to court and request permission from a judge to take guns away from people who could potentially do harm.