Accessibility links
Trump's First State Of The Union: More Pep Rally Than Bipartisan Breakthrough It is true that Trump's tone and manner were more restrained than his famously rousing style on the stump. But a somewhat more sedate delivery does not, in itself, constitute a conciliatory speech. 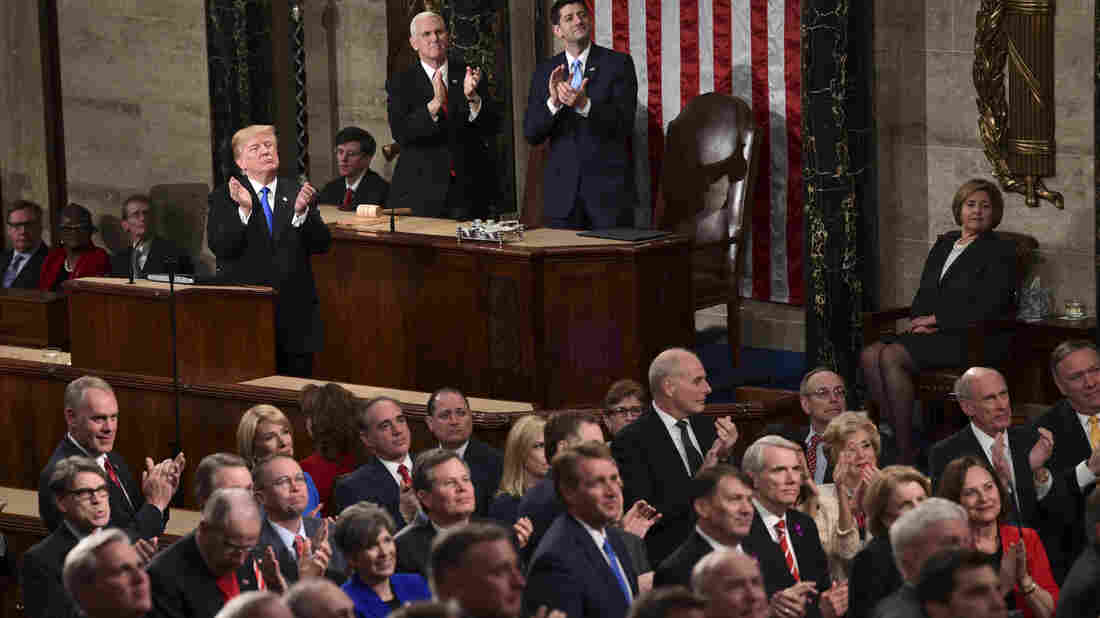 President Trump leads applause for guests in the first lady's box during the State of the Union address to a joint session of Congress on Tuesday. Susan Walsh/AP hide caption 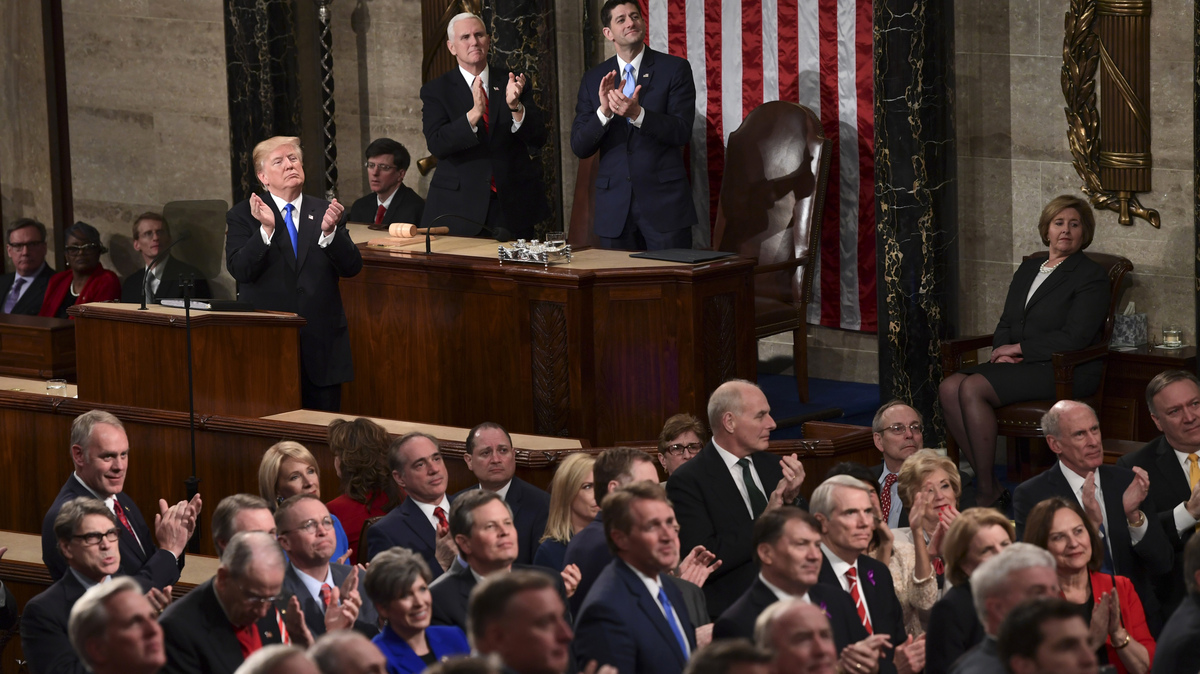 President Trump leads applause for guests in the first lady's box during the State of the Union address to a joint session of Congress on Tuesday.

President Trump's first State of the Union address was billed as a bid for unity, a call for all to rise above party and faction in pursuit of national ideas and ideals.

In fact, scattered throughout the 80-minute speech were several moments that might qualify as outreach. But if you blinked, you might have missed them.

For example, halfway through his speech, the president made a passing reference to vocational schools. Then he quickly added these 10 words — "And let's support working families by supporting paid family leave," a hat tip to a Democratic issue supported by his eldest daughter, Ivanka.

Cameras cut to a happy Ivanka, clapping in the family gallery. Democrats, too, leapt to their feet, and many stayed there as the president followed up with a single sentence referring to another of their issues: "[T]his year we will embark on reforming our prisons to help former inmates who have served their time get a second chance at life."

But anyone expecting a word of detail regarding any of these proposals or the resources they'd require, in fact, got no such thing. Last year, the president included paid family leave in his budget but left it up to the states to finance it. Nothing changed.

A bit earlier in the address, the president had this to say on another topic of urgency to many Democrats: "One of my greatest priorities is to reduce the price of prescription drugs. [Applause.] In many other countries, these drugs cost far less than what we pay in the United States. And it's very, very unfair."

And the White House plan for addressing this?

"[I]'ve directed my administration to make fixing the injustice of high drug prices one of my top priorities for the year," the president said, to general applause. "And prices will come down substantially. Watch."

Some may note that the newly confirmed head of Trump's Department of Health and Human Services comes to the office from Eli Lilly, the pharmaceutical giant. So, watch we will.

Throughout the speech, when the president came to questions of policy, he fell back on a recitation of his campaign talking points. Much of the speech recalled his remarks at the pep rallies he has held in the past year, most of them deep in the heart of Trump Country.

Fact Check: Democratic Response To State Of The Union

It is true that Trump's tone and manner on Tuesday night were more restrained than his famously rousing style on the stump. But a somewhat more sedate delivery does not, in itself, constitute a conciliatory speech.

This was most in evidence when Trump turned to immigration and related topics, as he did again and again.

Among his salient points was a repeated emphasis on the MS-13 gang and its crimes. These included alleged crimes he has highlighted before, complete with the victims' grieving parents, who were seated in the visitors gallery and were asked to stand for a round of applause. By citing the MS-13 ("horrible people") repeatedly, Trump emphasized his view that lax enforcement in the past has resulted in substantial economic, criminal and terrorist threats.

Trump made the same point in speaking of "open borders" that allowed criminals and drugs to "pour" across.

There were times when Trump's remarks could be heard and appreciated by all hearers. He laced his address with tributes to various American heroes whom all could salute and applaud — often at length. These included rescuers who saved lives in the California wildfires and other natural disasters of the past year. There were several uniformed military and police personnel who had battled the nation's enemies foreign and domestic.

These moments had the desired effect of bringing all in the House chamber and, symbolically, all those watching at home, to share moments of common emotion and community feeling.

But here again, Trump veered into his favored themes of criminality and joblessness stemming from immigration. Some of his heroes were parents of young people who allegedly died at the hands of illegal immigrants.

It is understandable that victims of any crime committed by immigrants may blame immigration for their suffering. But the exploitation of that suffering to appeal to hardcore anti-immigration voters and members of Congress may not be the way to "set politics aside and finally get the job done" — as the president said he wanted to do when it comes to changing the nation's immigration laws.

Even when discussing the DREAMers, whom he has said he would offer legal status and an eventual path to citizenship, the president was not letting go of the distinction between them and actual Americans.

DREAMers are the estimated 1.8 million U.S. residents brought to the country as minors without legal status. The president repeated his offer of status and eventual citizenship for these residents, made it conditional on Congress building his wall on the Mexico border and ending "chain migration" — his inimical term for long-standing programs stressing family reunification. Trump said ending such programs was intended "to protect the nuclear family" by limiting reunification to immediate spouses and minor children.

"Americans," the president said in a widely quoted passage, "are dreamers too." The distinction in the president's mind between Americans and these who aspire to be Americans could scarcely be clearer.

Ahead Of Trump's Speech, A State Of Disunion On Capitol Hill

As the evening began, the usually celebratory atmosphere of such occasions was lacking. For some, at least, the moment was fraught with the divisiveness of immigration and issues of sexual assault and harassment. Some Democrats had invited DREAMers as their gallery guests, prompting Rep. Paul Gosar, R-Ariz., to suggest these guests be arrested by Capitol Police and deported. 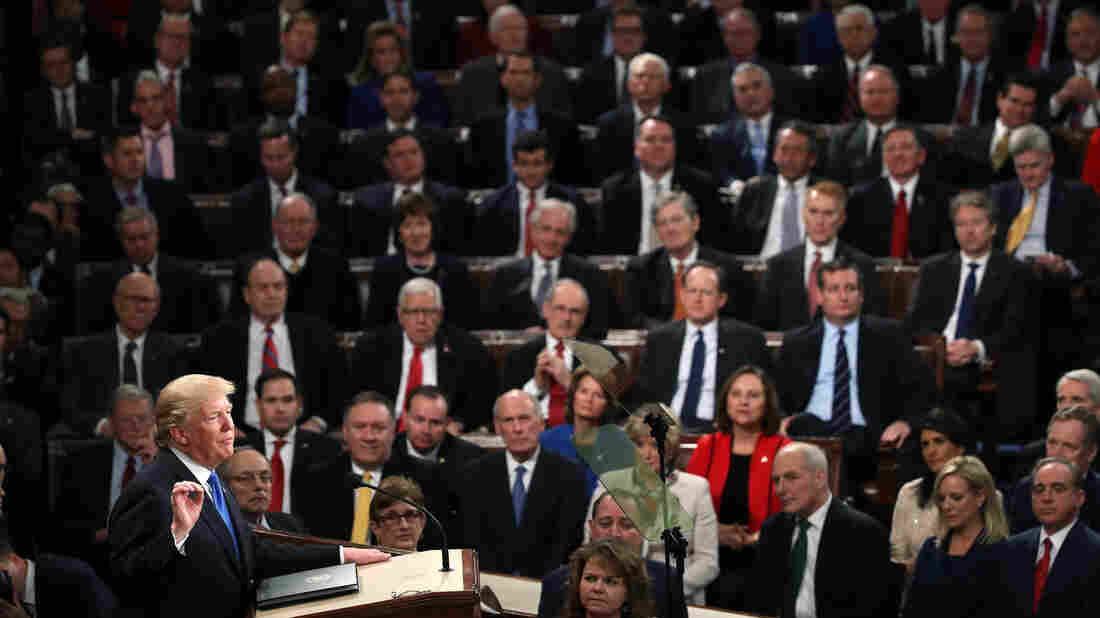 Trump makes a point during his State of the Union address. Mark Wilson/Getty Images hide caption 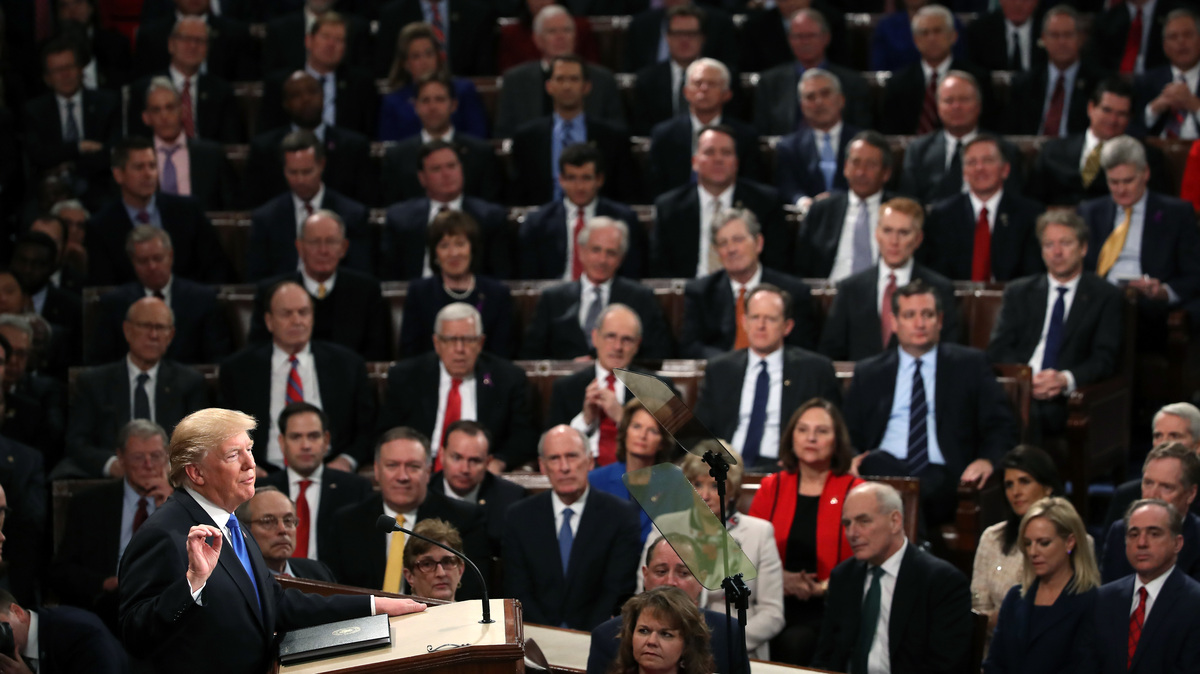 Trump makes a point during his State of the Union address.

Given this tension, the president might have chosen to make a very different speech — aimed at meeting his various opponents halfway. He might have credited, for example, some of the members of the Senate who have been trying to negotiate a compromise on immigration. He might have saluted the Democrats in the Senate who voted for his tax cut last year, or who have been negotiating with his administration on infrastructure and other areas of shared concern.

We know the president is capable of such behavior; we saw him do it when he hosted a bipartisan White House meeting of House and Senate leaders on immigration on Jan. 17. During that hourlong confab, with TV cameras still on, Trump listened to all sides and offered to embrace whatever they could produce.

Two days later, of course, the president famously rejected what he'd asked for and produced his own set of demands. After that, the immigration puzzle seemed as far as ever from a solution. And the State of the Union address left the two sides, or the many sides, just as far apart.

And then there is the even more explosive question of the Department of Justice investigation into election interference by Russia. Trump mentioned Russia only once in his address, and then only in a drive-by reference to "rival countries such as China and Russia." He never mentioned his struggles with the FBI, or his widely reported concerns about DOJ special counsel Robert Mueller. Perhaps it would have been surprising if he had. His lawyers might well have urged him not to, just as they probably beg him not to discuss the investigation on Twitter.

But would it have been impossible for Trump to have at least expressed respect for the legal process now underway? Would it be wrong for him to relieve the anxieties of many in his party who fear he might soon fire Mueller or Rod Rosenstein, the Justice Department official who appointed Mueller?

Even Richard Nixon took on Watergate, which was the elephant in the room when he gave his last State of the Union address early in 1974. "One year of Watergate is enough," Nixon said, referring to the various probes that had dominated the news in 1973. Republicans in the chamber agreed and applauded.

In any event, leaving Russia out entirely represented yet another missed opportunity to make this speech a truly national and nonpartisan assessment of the state of the union.