Accessibility links
FBI Warns Of 'Grave Concerns' About 'Accuracy' Of GOP Snooping Memo The FBI went on record faulting the much discussed memo as the White House said it was working to make it public. It could appear as soon as this week. 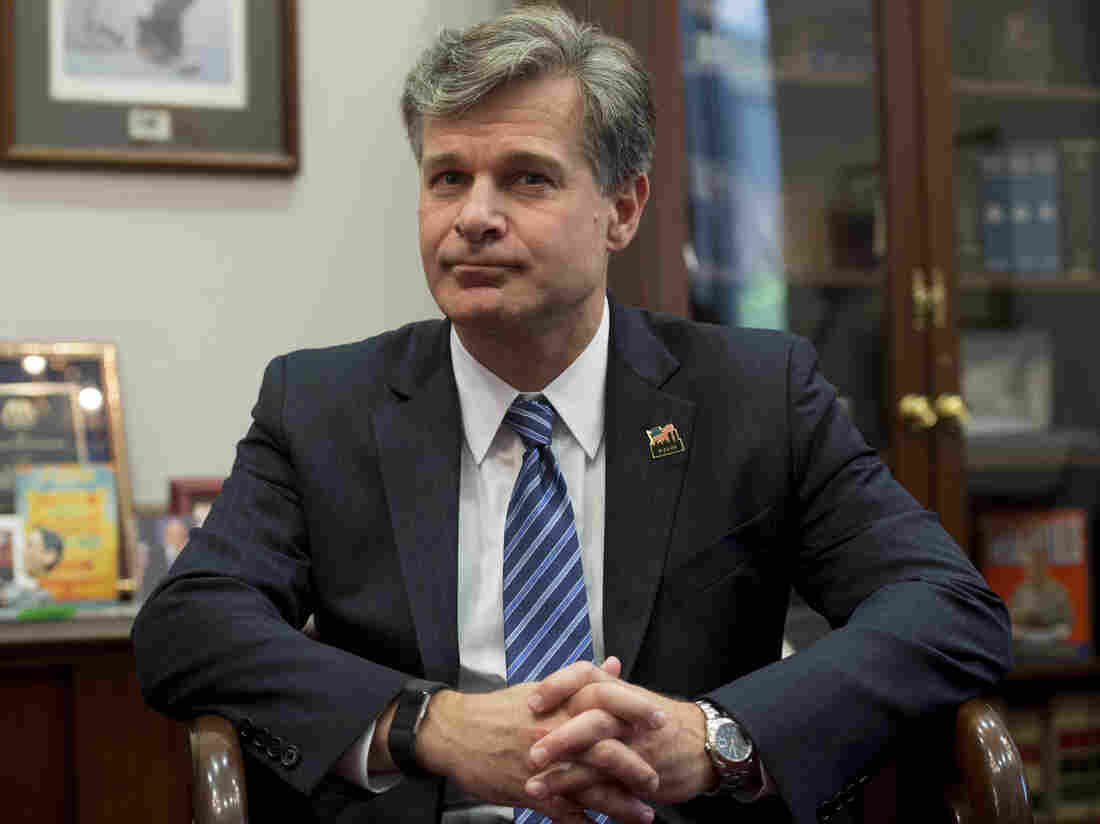 FBI Director Christopher Wray. The bureau warns it has "grave concerns" about the "accuracy" of the Republican surveillance memo at the center of a partisan whirlwind in Washington. Saul Loeb/AFP/Getty Images hide caption 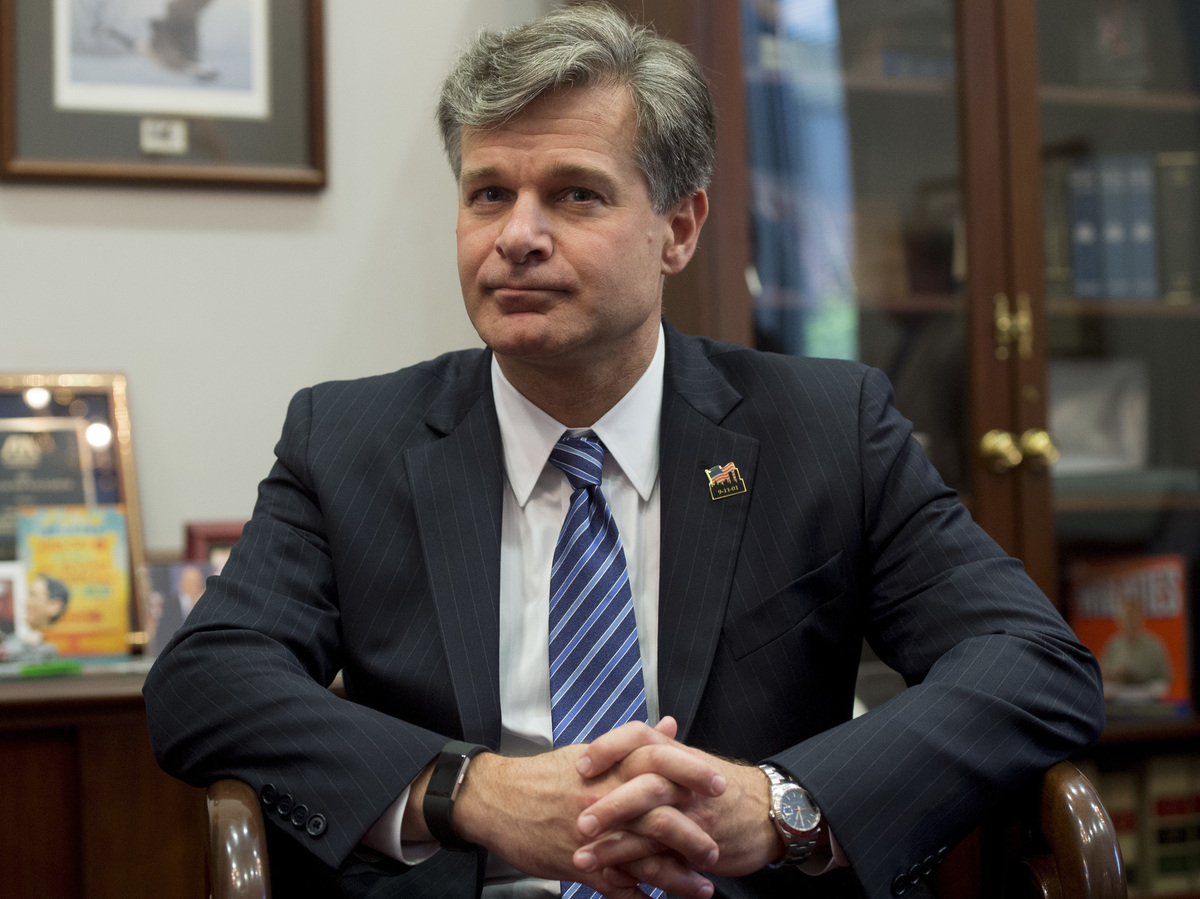 FBI Director Christopher Wray. The bureau warns it has "grave concerns" about the "accuracy" of the Republican surveillance memo at the center of a partisan whirlwind in Washington.

The FBI clashed with the White House on Wednesday over the much discussed Republican memo that alleges the bureau abused its surveillance powers. The bureau said it has "grave concerns" about the "accuracy" of the document that the president supports making public.

Meanwhile, the ranking Democrat on the House intelligence committee, which voted to release the memo, says Republicans secretly made "material changes" to the document after the decision to make it public.

The FBI issued a rare, two-paragraph statement undercutting the position taken by President Trump and his top aides that the memo should be disclosed to the public soon.

"With regard to the House Intelligence Committee's memorandum, the FBI was provided a limited opportunity to review this memo the day before the committee voted to release it," the FBI said. "As expressed during our initial review, we have grave concerns about material omissions of fact that fundamentally impact the memo's accuracy."

The FBI statement appeared amid a bitter political fight over the memo, which was drawn up by committee Chairman Devin Nunes of California and the panel's Republican staff. Nunes and other GOP allies of Trump say the memo makes the case about an epic scandal inside federal law enforcement.

The Justice Department has already said that releasing the memo would be "extraordinarily reckless" and could hurt national security or ongoing investigations.

Nunes, a Trump ally who served on the president's transition team, responded to the FBI with a fiery statement of his own.

"Having stonewalled Congress' demands for information for nearly a year, it's no surprise to see the FBI and DOJ issue spurious objections to allowing the American people to see information related to surveillance abuses at these agencies," he said, referring to the Department of Justice.

Nunes accused the FBI of leaving out important information in its presentations to Congress and the courts. And he invited the bureau to make public all the information it has on "these abuses."

"It's clear that top officials used unverified information in a court document to fuel a counter-intelligence investigation during an American political campaign," Nunes said. "Once the truth gets out, we can begin taking steps to ensure our intelligence agencies and courts are never misused like this again."

Democrats say the four-page document is misleading and part of an effort to undermine the bureau and Justice Department special counsel Robert Mueller. His office is investigating possible coordination between the Trump campaign and Russia's attack on the 2016 election.

The committee's top Democrat, Adam Schiff, sent a letter Wednesday to Nunes charging that "material changes" had been made to the memo after it was voted on and that the version handed over to the White House "is not, in fact, the same document."

"Upon our discovery that the document sent for public review had been secretly altered, the Majority belatedly afforded the Minority an opportunity this evening to compare the document transmitted on Monday night by the Majority to the White House with the document made available to all House Members since January 18," Schiff wrote.

"After reviewing both versions, it is clear that the Majority made material changes to the version it sent to the White House, which Committee Members were never apprised of, never had the opportunity to review, and never approved," he added, calling the alleged alterations "deeply troubling."

Republicans responded to the letter, saying Schiff's complaints were merely a "strange attempt to thwart publication of the memo."

Democrats were "complaining about minor edits to the memo, including grammatical fixes and two edits requested by the F.B.I. and by [Democrats] themselves," Jack Langer, a spokesman for Nunes, said in a statement, according to The New York Times.

In a Washington Post op-ed, Schiff noted that the memo also paves the way for the possible firing of Mueller or the man overseeing the probe, Deputy Attorney General Rod Rosenstein. That would allow the White House to replace Rosenstein with someone willing to shut down the investigation.

The intelligence committee voted along party lines on Monday to release the memo to the public. The White House says it is currently reviewing the document, and the president said Tuesday night that the chances of its being released are "100 percent."

For now, the memo remains classified. Lawmakers who have read it say it alleges the FBI and Justice Department gave scurrilous or incomplete evidence to the Foreign Intelligence Surveillance Court in order to surveil people in the Trump camp.

In its statement, the FBI says it "takes seriously" its obligations to the FISA court that approves surveillance for foreign intelligence purposes. The bureau says it is "committed to working with the appropriate oversight entities to ensure the continuing integrity of the FISA process."

Current and former intelligence officials have expressed concern that the FBI would be unable to counter any factual errors or misrepresentations in the memo because the information it is based on remains classified.

The statements from the FBI and Nunes followed accusations by a Democrat on the intelligence committee that Nunes worked with the White House to prepare and now release the memo.

On CNN Wednesday, Rep. Mike Quigley, D-Ill., relayed a conversation he said he had with Nunes during a committee meeting.

"I asked the chairman, 'Did he work with' [the Trump administration], and I asked all the preliminaries — coordinate, discuss — and he said, 'not to my knowledge,' " Quigley said. "And I asked him, 'Did your staff?' And then he became quite agitated and he said, 'I'm not answering that.' "

Quigley said there was precedent for questioning Nunes' contacts with the White House. He pointed to what he called the Republican chairman's "midnight ride" to the White House in March to receive classified documents from the administration alleging improper "unmasking" of Trump associates in intelligence reports.

"I fully believe that Chairman Nunes has not changed his tactics. He began this investigation as a subsidiary of the White House, as someone who was coordinating with them rather than being an independent investigator," Quigley said. "The sad part is he is the chairman of the committee that is investigating the most important attack on our country's democracy in our lifetime."

Nunes' office did not immediately respond to a request for comment.

As Democrats raised questions about a possible White House role in crafting the memo, White House chief of staff John Kelly said he expected the memo to be made public soon.

"It will be released here pretty quick, I think, and then the whole world can see it," Kelly told Fox News Radio on Wednesday.

Although the White House's preference for making the memo public is clear, it remains unclear, at this point, exactly how the document would be released.

A senior Republican on the intelligence committee, Rep. Michael Conaway of Texas, told NPR that the memo would be published in the Congressional Record.

"As I understand the mechanics, the way we actually release is that we insert it in the Congressional Record. The House has to be in session to do that," he said.

The House is currently out of session. It's scheduled to return for a pro forma session Friday afternoon, so if Conaway is right, then late Friday is the earliest the memo could be officially released.