Accessibility links
Review: Son Lux, 'Brighter Wounds' Brighter Wounds achieves another breakthrough during a fraught and heartbreaking period. It's the band's most personal album yet. 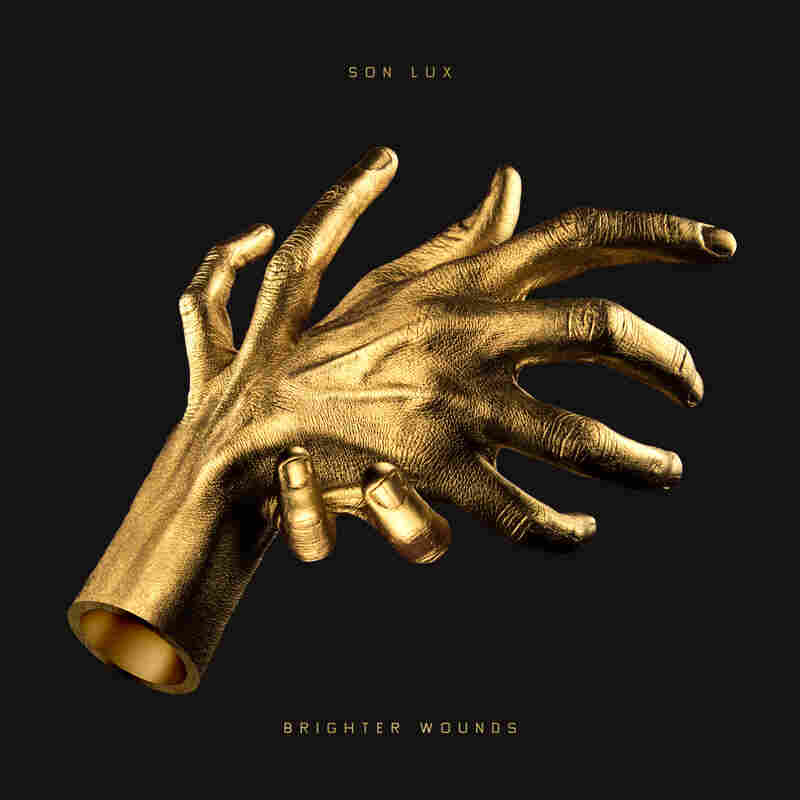 Ryan Lott is both a classically-trained musician and composer, and an inventive sound designer adept at beat production. For years, he's blurred genre lines with his scores for film and dance, and of course, with his moniker-turned-band, Son Lux. With a masterful flair for entwining the acoustic and the electronic, Lott crafts distinctive fluttering melodies, unique textures and dynamic arrangements that sound like no one else. Whether portraying majesty and wonder or heart-wrenching pain, Son Lux's songs always transport us inside his richly rendered imagination.

Son Lux's new album, Brighter Wounds, takes a darker turn. Written and recorded in the wake of the 2016 election and the tumultuous year that followed — a period during which Lott also experienced the birth of his first child and the tragic loss of a close friend to cancer — Brighter Wounds establishes an ominous tone early and across these 10 songs. While not overtly political, it's impossible not to hear a looming, if unspoken undercurrent of dread that informs Lott's mindset as he tries to make sense of the joy and sadness that arises when confronted with literal life and death.

On the opening "Forty Screams," Lott laments the state of the world his newborn son will one day inherit. "I had wanted another world for you. If I can't bear to see it through, will you?," Lott sings, admitting self-doubt and resignation that will feel familiar to any new parent raising a child in uncertain times. "Speak love! Scream love!," he repeatedly implores as a reassurance of hope for an unshaped future. "Aquatic," similarly ponders the fleeting cycle from life to death and legacies we pass on: "We all may begin aquatic, but we leave only dust from our bones."

Throughout the the album's arc, Lott seeds numerous allusions to a struggle between light and dark, day and night, as well as a leitmotif of escape — from awaking from a haze and recapturing the romance of youth ("Dream State") to unburdening oneself from being defined by old traumas ("Surrounded"). "Slowly" addresses the lies we tell to comfort each other when the truth becomes too much to bear.

Brighter Wounds features longtime collaborators like DM Stith, Rob Moose and yMusic and newer ones in trumpeter Dave Douglas and the instrument-builder and musician Arrington de Dionyso. Lott's strongest partnership, however, remains with his bandmates, guitarist Rafiq Bhatia and drummer Ian Chang. The New York musicians were initially brought on to help tour Son Lux's 2013 album, Lanterns, but now, after countless live performances and several recordings together (namely 2015's Bones, and the 2017 EP Remedy), they're indispensable in every step in the creative process.

Bhatia and Chang's musical fingerprints can be felt everywhere, from the dynamic rhythmic interplay and improvisational start-stop spacing between notes in "Slowly" to the way Chang's propulsive polyrhythmic drumming on "Surrounded" careens into the song's noisy static. "Labor" pares down to spare piano, swooning violins and Bhatia's soulful guitar licks, placing focus on Lott's shuddering croon and a chorus of female voices. "All Directions" similarly tweaks with form, elevating tension via minimalism and silence before erupting with a glimmering cascade of synths and strings — and a soaring choir chanting "Weren't we beautiful once? Weren't we the beautiful ones?"

Brighter Wounds ends on a note of uplift in "Resurrection." After his journey "out of the darker day and into the brighter night," Lott stirs himself from depression and grief and finds redemption and rebirth by embracing family and faith as a guiding lights. "Is this what the resurrection feels like from the other side?" he sings. As Son Lux continues to innovate and show off its musical versatility, Brighter Wounds achieves another breakthrough during a fraught and heartbreaking period. It's the band's most personal album yet.