Accessibility links
'A.P. Bio' And The Complications Of Context NBC debuts a comedy on Thursday night that's a funny take on a man so terrible that you're meant to enjoy him — if you're into that kind of thing.

'A.P. Bio' And The Complications Of Context

'A.P. Bio' And The Complications Of Context 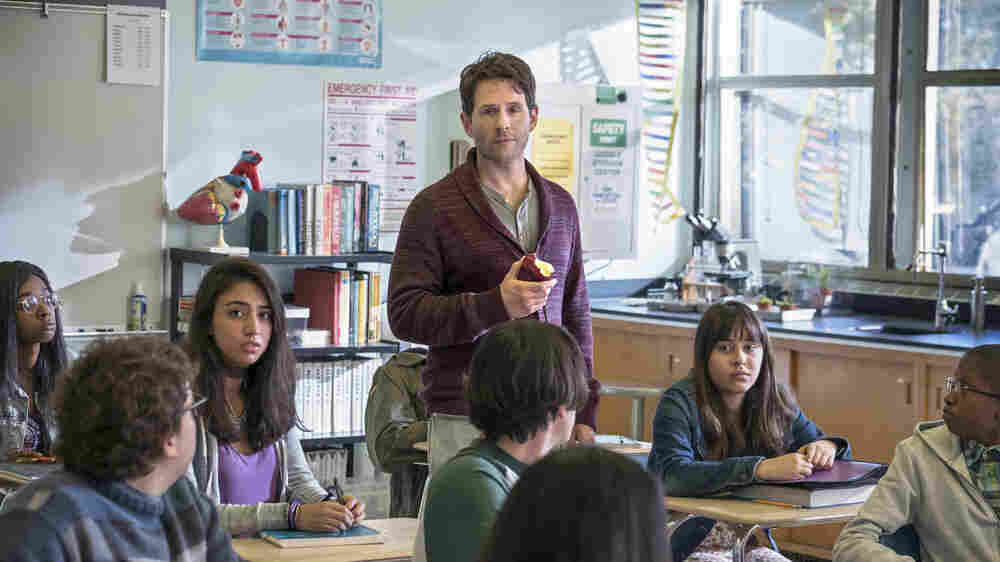 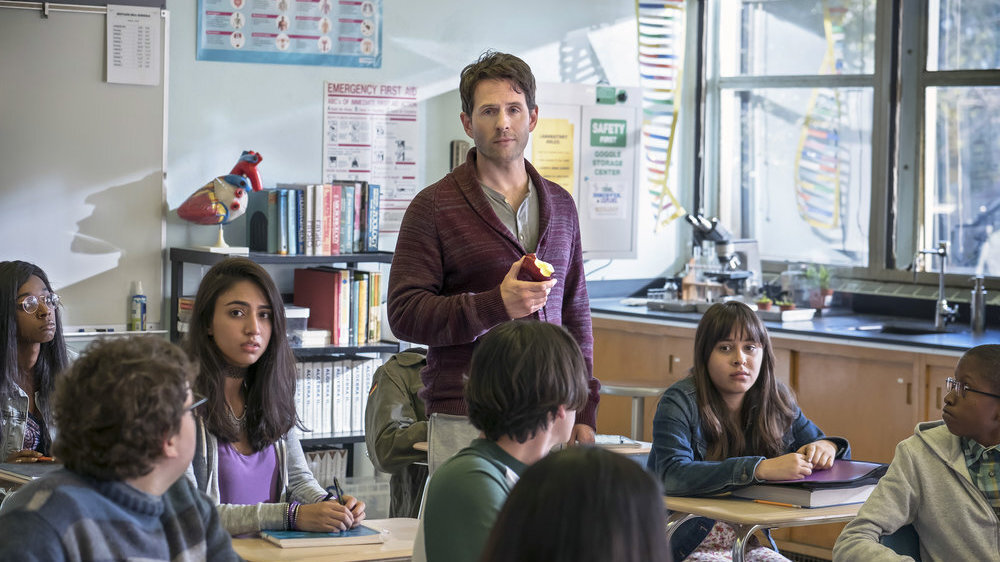 Allow me to be the first — and probably the last — writer to draw a comparison between NBC's new comedy A.P. Bio, premiering Thursday night, and Paul Thomas Anderson's Phantom Thread, which is nominated for best picture.

Phantom Thread is made beautifully. It's shot with luscious, almost leering passion. It makes fabric look more fluid than perhaps any film I can remember. The performances are perfect for what's intended. Where it fell down for me was in its tight focus on the particulars of a monstrous genius who, at least for much of the film, treats his own creative pursuits as the only thing worth protecting and relies on other people — primarily women — to give everything, tolerate everything, and ask for nothing.

There's nothing to fault in the filmmaking itself, but we choose what stories to tell and what stories to read, and we always have. And right now, after spending three or four months reading horror stories about abuses of power, many by creative men who treated other people in just this way, it's hard for me to recommend that people fondle, for the billionth time, this particular piece of recurrent mythology, this fascination with toxicity as a growth medium for art.

A.P. Bio stars Glenn Howerton (It's Always Sunny In Philadelphia) as Jack Griffin, a Harvard-educated philosopher who loses his gig and winds up back in his hometown of Toledo — as in much of pop culture, a retreat to the midwest represents humiliating defeat here — where he's assigned to teach Advanced Placement biology. (You have to kind of hum loudly and go along with this part, which posits that a high school desperate for recognition would hire someone with literally no science background to teach biology just because it says "Harvard" somewhere on his C.V., which wildly overstates the rarity of Harvard graduates and wildly understates educational bureaucracy.) The purpose of all this is to set up the premise that Jack is a jerk who goes out of his way to tell the kids this will not be one of those teachers who teaches them anything. He tells them to shut up and decides to use them for his own purposes — catfishing his hated rival, for instance.

A.P. Bio is basically a broadcast effort to follow the unlikable-person comedies like It's Always Sunny and You're The Worst and so forth. It feels very, very much like early Community, too, with Jack as its Jeff, an arrogant, over-it, disaffected guy rolling his eyes at the earnest pursuits of lesser humans. Only here, instead of friends who can push back, Jack has ... high school students. And instead of just slacking, he wants to get, for instance, high school girls to catfish men he doesn't like. (Blergh.)

Here's the thing: It's well done, in many respects. There's nothing wrong with the way Jack is written; he's got the right mix of exasperation, vile opportunism, and utter boredom for this setup. And outside of Jack himself, there's some very fine comedy. Niecy Nash, one of the most reliable comic actors who can be added to any ensemble, eventually shows up, and she's on fire from her first moments. So is Paula Pell, a longtime Saturday Night Live writer who I'm always happy to see on screen. And Patton Oswalt is funny — and not overused — as a try-hard principal who's sort of a sadder version of Jim Rash's dean from, again, Community.

The show is executed pretty well, but I don't really want to watch it. I don't want another "that's just him," or "he's keeping it real," or "love or hate him, you can't stop watching him!" story. I actually can stop watching him. I choose to stop watching him, despite the fact that the show has achieved its potential and done what it set out to do — quite well, actually.

The idea that it's possible to consume art — whether it's classified as fine art or popular media — objectively is based on the idea that you can shut off the ways you are culturally grounded. It supposes that you can remove the filters of your experiences and your concerns and what you've seen represented and not represented, and what effects on the world around you the culture you live with has had. When I spoke about Phantom Thread and acknowledged that how engaging I found it was affected by the last few months of harassment and abuse allegations that have become public, one listener told me that my view was sadly "clouded" by those things. And you can argue my feelings about A.P. Bio are "clouded" by the fact that it's hard at this particular moment for me to enjoy laughing at an untouchable jackass abusing power over students.

But how do you know what's clouded and what's cleared? Why is it more likely that only wanting so much of this story, of these lovable bastards, is clouded judgment, but embracing it up until now was clear judgment? How can knowing more about people's experiences make your vision less clear?

Context, after all, has profoundly affected what shows are ever made. The context of who has power and who doesn't affects why Lorne Michaels — an executive producer here — has almost taken over the NBC comedy brand. It affects what opportunities Mike O'Brien, the SNL cast member who created A.P. Bio, has, and what opportunities Paula Pell has. Not to mention what opportunities Niecy Nash has. Context is in play on the creation side, and it is in play on the reception side, too. It's impossible, I think, for our cultural vision to have been clearer when real things that really happened were kept secret.

What I think I owe as a critic is be able to say: the show is funny. The show isn't weirdly paced or inconsistent in tone. It's actually quite confident and sure-footed — if a bit derivative — and it sports some very good performances. (Have I mentioned I would watch Niecy Nash do her laundry?) But it does, in fact, fall into the long tradition of He's So Monstrous He's Wonderful stories, and for me, that's played out.