Accessibility links
6 Rules For Roundtable Podcasting An attempt to come up with rules to explain the singular appeal of roundtable discussion podcasts by a guy who's on one — and who's listened to hundreds more. 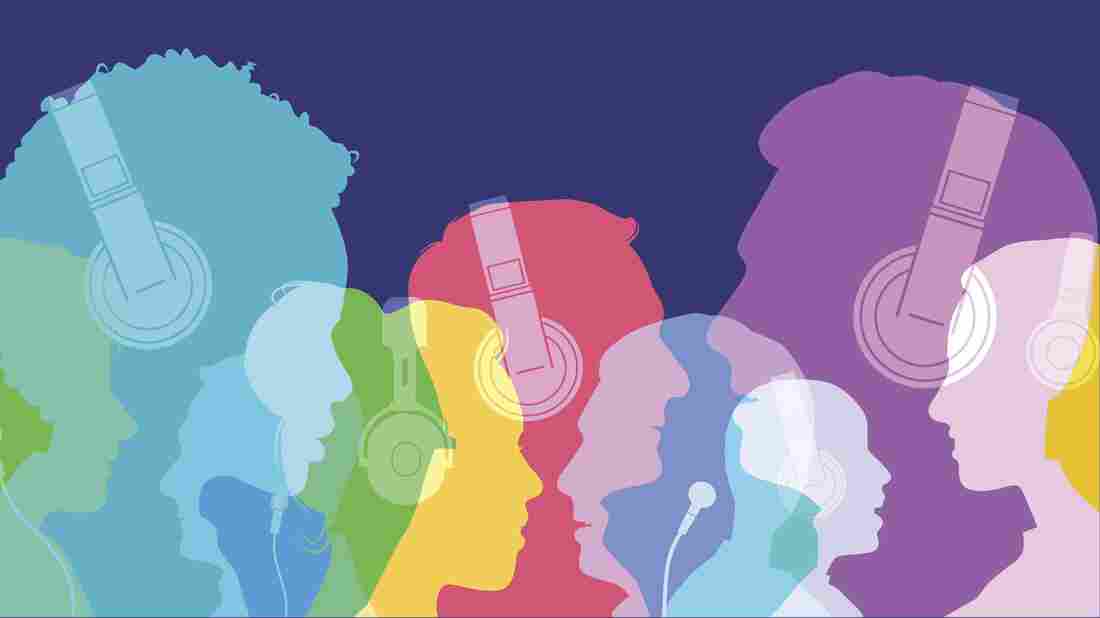 Earbud Nation: Your favorite podcast hosts can seem like open books — but to them, you're a blank slate. smartboy10/Getty Images hide caption 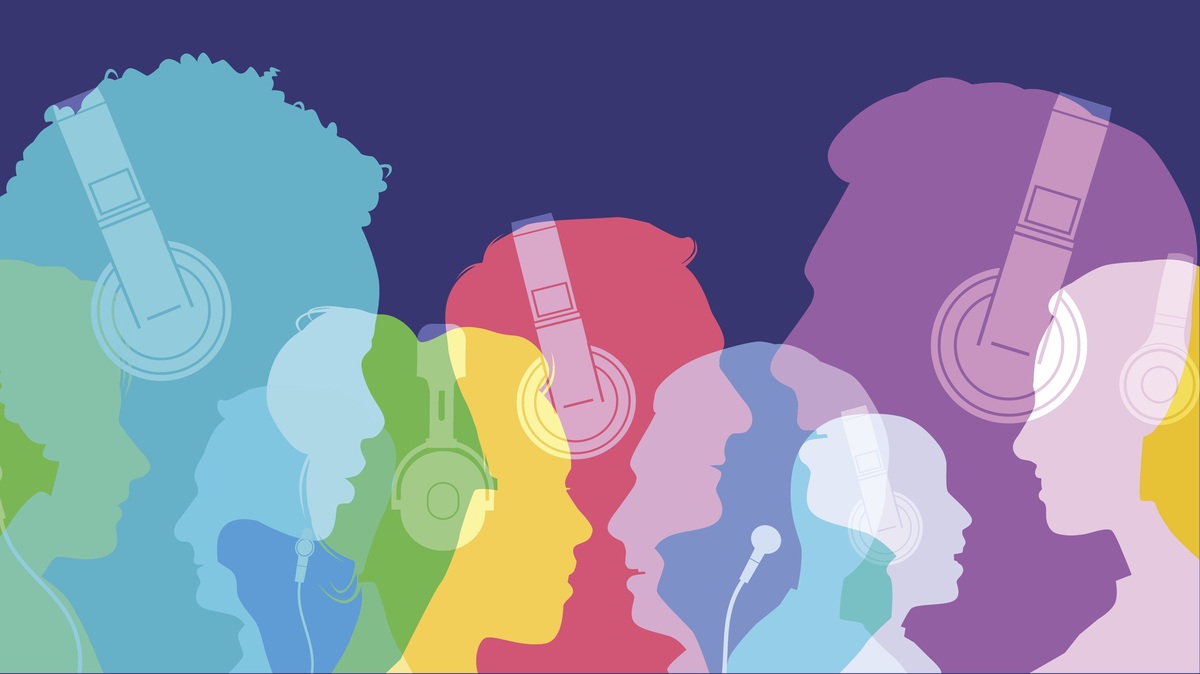 Earbud Nation: Your favorite podcast hosts can seem like open books — but to them, you're a blank slate.

I fell in love this week. Happens more often than you might think.

But the fact that it's happened before, and will happen again, doesn't mean this latest infatuation is any less passionate, abiding, head-over-heels, birds-suddenly-appear, stars-fall-down-from-the-sky resolute.

My husband's cool with it. He always is; we have an understanding. Also the object of my love is a podcast. Probably should have mentioned that at the top.

This time it's Answer Me This, a (now) biweekly British show entering its 11th year, hosted by Helen Zaltzman and Olly Mann. They answer questions posed to them by the public — that's it. That's the whole thing. Except of course it isn't, and there's a lot more to it: I spend a few minutes extolling the depth and breadth and height of my passion for the show on an upcoming episode of Pop Culture Happy Hour, so I won't jabber on about it here, but just know: It's great.

I did what I always do, with a newly discovered podcast paramour: I binged. I tore through their archive, devouring episode after episode, moving steadily backward through time — Benjamin Buttoning like a goggling fiend. It's all I've listened to for a solid week: on the Metro, at the gym, walking the dog, folding socks, loading the dishwasher, realizing I'd just loaded the dishwasher with folded socks, unloading the dishwasher, you get the idea.

The putative subjects of these podcasts that turn my eyes into fluttering hearts, in defiance of several basic biological and anatomical laws, vary widely: current events, movies, television, paternally penned erotica. Several are comedy podcasts, where the subject is the collective chemistry of the participants itself.

It occurred to me, as I paused in my gorging of the Answer Me This archive (interrupting Helen and Olly as they were commiserating about what a lousy year 2015 was shaping up to be, which: oh, honey) that what had triggered this latest infatuation was exactly the same thing that had triggered all those others.

This profound sense of adoration I was feeling, I realized then, was not directed at the podcast's subject, or even, technically, at the hosts themselves. It turns out that what I love, what I hunger for, and what keeps me perpetually searching for new roundtable discussion podcasts, is what gets created at the intersection of these subjects, and these hosts — the particular nature of these conversations.

It creates in me a great upwelling of congenial familiarity, of sense of knowing and being known.

Which is, let's stipulate here, nuts.

But that doesn't matter: Listening to a favorite podcast — whether you do it over the course of years, months or hours — engenders a powerful sense of intimacy. You come to know the hosts' tastes, their tics, the phrases they overuse. As they unthinkingly dole out tiny, incremental parcels of information about their personal lives — a new baby here, a beloved pet's passing there — you realize one day that your brain has unthinkingly constructed exhaustive virtual dossiers on each of them.

You listen to them talk to one another in exactly the same way you talk to your friends. You keep them close throughout your day — you can even sleep with them if you want to, that's your business.

Perhaps most crucially, earbuds transmit their voices inside your head — they roost there, rubbing shoulders with your own thoughts.

No wonder you feel as if you know them; that the sound of their voices comes to fire precisely the same neurons, arouse the same feelings, that the voices of your closest friends do.

It's purely biological, and it's indistinguishable from intimacy — except for one minor, mundane, trifling detail:

You know them, you trust them, you love them, and they have absolutely no idea who you are.

Mass media has always fostered this imbalance, of course. You likely feel some sense of ephemeral but deeply personal closeness with the authors of your favorite books, or actors whose work you've followed avidly all your life, or familiar radio personalities, maybe there's a comedian or two whose sensibility you feel lines up with yours.

Theaters and movie houses are communal spaces that exist to take you outside of yourself, and transform you into a collective identity — an audience. But radio, television and the Web bring experiences to you, they're inside your home. And in the case of podcasts, anyway, inside your brain.

It's not logical, this sense that your favorite podcast hosts are your friends, but it's hard-wired, inescapable. Look, I'm on a podcast myself, and over the years I've had several very nice strangers come up to me to remind me of a thing I said once that I don't remember, or to ask something small and alarmingly specific about my husband, my dog, my favorite movie. It's both tremendously flattering and a bit disorienting. I'm an open book to them; they're a blank slate to me.

I know all this, and yet I have gone up to the hosts of podcasts I love and done the very same thing. That feeling of closeness bypasses higher brain functions. All of this information, these vast stores of osmotically collected data, these feelings on feelings, are sloshing around inside me; I gotta do something with them.

That's the singular power of podcasts, I think. (Roundtable discussion podcasts, that is. Obviously there are many different kinds, and the various formats — slick storytelling, authoritatively imparted history, true-crime deep dives — will engender different but related clusters of feelings.)

I've been thinking about why I feel the way I do about the podcasts I love, and what, precisely, triggers this sense of a deep, enduring, unidirectional intimacy. I've narrowed it down to a handful of factors they share.

Maybe you're thinking of starting a podcast with some friends. (It's 2018, those odds are pretty good.) Here then, humbly submitted, are some traits that, taken together, engender the profound sense of closeness I feel with my favorite podcasts. They're subjective, of course, and they're just common sense, but I did want to conclude this post by offering something a bit more concrete than gee podcasts are a thing, hunh? so here goes:

This first rule is, of course, the toughest one to achieve. But if you're trying to hit upon the precise interpersonal alchemical formula that will make us fall in love with your podcast, the best thing to do is not to try. We can sense when something's forced, when you've selected your panel based on something clinical like expertise, instead of something organic like sensibility, or a shared history. If we can hear your respect and affection for each other, we'll join in with it.

Look, there are plenty of great podcasts featuring romantic partners, and many romantic partners have no problem making fun of each other. That's great, because being able to make fun of each other, and each other's opinions — lightly, judiciously, respectfully, joyfully — is essential to the endeavor. We want to hear you disagreeing, when you do disagree, in an honest, full-throated way — but we don't want to worry about your relationship. We don't want you bringing outside arguments into the mix, or letting discussions descend to a place where you're simply trying to score points off each other. Keep the stakes low, the conversation bubbling, and when necessary, call each other out with glee, the way friends do.

I know you, bunky. You've got the gift of gab. You're eloquent, witty, thoughtful. You don't want to sound flat, rehearsed, anodyne. You think you can you wing it.

Here's the thing though: You can't.

Attitude is not enough. I've unsubscribed from many podcasts over the years because the panelists in question have convinced themselves that a sardonic "What's THAT about?" amounts to a point of view. It doesn't. We need more. Think about what you're going to say: Bring notes, plan phrasing.

You need to invite us in, and the way you do that is by bringing us along with your thought process. Roundtable podcasts do need to feel different than polished, heavily produced radio pieces. Slickness is the enemy, it keeps us listening at a far remove. We want to feel like we're in the room with you. So by all means, prepare, and think about phrasing. But plan ways to say things that will open the discussion, not shut it down. Invite your fellow panelists into your thinking, and follow along with theirs. Show your work; reach for insights. The goal is for all of you to collectively find something in that room that you hadn't planned on finding before you went into it.

Which is to say: Listen.

(This is the third most important rule.)

5. Be yourself. But better.

Blah blah blah, don't be slick, it's important to be raw and real, to reach for conclusions instead of forcing them blah blah blah: Yes. Clearly. That's all true. Learn it. Internalize it. Live it.

... And now forget it. Because the version of you that you need to be on your podcast is a performance.

Or maybe it would better to say: a distillation of yourself. Sharper, cleaner, more efficient. Pithier.

Please, for the love of all that is holy, be pithier.

How do you do that? Simple:

6. Edit. Edit ruthlessly. I mean, with no discernible ruth. At all. None. Think the last 10 minutes of Harold and Maude. Is how ruthless.

This is the single most important rule of all.

Look, no hyperbole or anything, but it's the One True Answer to Everything.

I know, I know I've hectored you above about how roundtable discussions need to feel loose and shaggy — natural, not polished.

But that's just it. They need to feel loose and shaggy. Not be. FEEL.

And that means editing. That means cutting digressions, dead ends, jokes that don't land, and — if you're willing (and be willing, oh, do!) — the uhms and aahs and lip-smacks. It means listening back with your aural scalpel and slicing away any dead conversational tissue. When it doubt, take it out.

It's not dishonest. It's not disingenuous. It's not slick. It's a vital service to us, your listeners. It's a way of centering your discussion, a vital opportunity for you to identify and clearly delineate what makes your podcast uniquely its own.

On Pop Culture Happy Hour, we freshly marvel, week after week, at the yawning chasm that stretches between our raw audio and the finished product producer Jessica Reedy delivers. Applying what I call the Jess Filter makes any given episode 100 percent better than it began — and, in the bargain, makes us seem a good 40 to 45 percent smarter than we know ourselves to be.

Now: You likely don't have a Jess. That means the hard duty of editing falls to you. Don't shirk it. Violate Rules 1 through 5 if you must, but you can still pull things out — you can still inspire legions of listeners to tear through your archives, binge-listening to your every utterance while cartoon hearts flutter around their heads — if you don't flake on Rule 6.

So go now, and podcast. Podcast like the wind, if the wind were a thing with a podcast! Be brilliant, be witty, be warm (but not too warm, please, guys), be brutally tough on yourself, and have fun. If you do, so will we.