Accessibility links
'This Is Not A Love Letter' Really Is A (Heartbreaking) Love Letter Kim Purcell's new novel is structured as a long, beautiful, despairing letter from a young woman to her missing boyfriend, written as she spurs her friends and neighbors into action to find him. 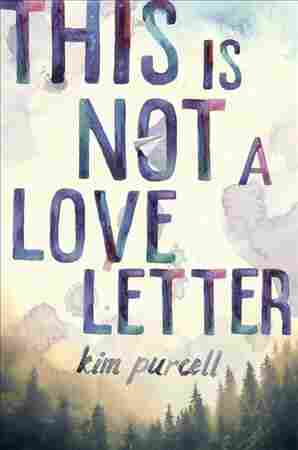 This Is Not a Love Letter

Title
This Is Not a Love Letter
Author
Kim Purcell

Every now and then I read an article or essay musing about whether or not young adult literature is "too dark" — whether there's too much sex, too much violence, too much sadness. The premise of these essays is usually that teenagers exist in some pristine unspoiled state until they pick up a book about drug use or self-harm that makes them unhappy.

This is of course not the case — and I'm glad that Kim Purcell's This is Not a Love Letter exists for teenagers who have to look after their parents, navigate hostile social environments, and cope with trauma.

Jessie lives with her disabled, hoarding mother in an impoverished part of a small, mostly white former mill town in the Pacific Northwest. Her boyfriend, Chris, is one of very few black people in the area; when he goes missing (during a week-long "break" they're taking from their relationship) Jessie spurs her friends, neighborhood, and neighboring towns into action to find him. The book consists of a letter she's writing to his absence, documenting everything being done to find him, but also writing to him as she never has before, with a vulnerability and an intimacy born of the desperation to bring him home. She confesses feelings and thoughts she hasn't done in person, reflects on the love letters he's written her that went unanswered, building Chris' presence out of his absence as the best letters do.

But the longer Chris is gone, the more the mystery of what could have happened to him grips Jessie, her friends and his family — while the systems and mechanics that normalize and excuse violence against black men kick into high gear.

I read pretty quickly. But it's unusual for me to read a 350 page book in exactly 3.5 hours, feeling the story's urgency pull me deeper and deeper inside it. Jessie is a lifeguard, and describes, at one point, a strategy of fighting off an attack in the water by diving to a river's bottom; I felt that strategy in the writing, of Jessie kicking down into the scariest possibilities as if that might force her fear to let go and stop pursuing her. It's a tremendously engrossing, affecting book, and I was thoroughly absorbed.

That said, there are blurbs aplenty that describe this book as "brave," which in my experience is code for "white author writing about racism." The parts of the book that were most effective for me on that front involved Jessie examining herself as well as her town's history and the behavior of others; recognizing the mortifying, inadvertent ways in which we take in a legacy of viciousness just by existing in unjust worlds. I was often deeply moved by Jessie's honesty and anger, and nodded along at the reactions of people more angry at being called racist than at the existence of racism.

I read pretty quickly. But it's unusual for me to read a 350 page book in exactly 3.5 hours, feeling the story's urgency pull me deeper and deeper inside it.

It's worth pointing out — especially as this review is appearing during Black History Month — that this is a book aimed at white people, where the main black character is the book's absent center, and is, moreover, a paragon of virtue, whose many good qualities are affirmed again and again as rebuttals to racist arguments. I come down on the side of this as feature, not bug — but I feel the need to affirm, in a way the book isn't built to do, that this shouldn't have to be the case, and that I wish the undeniably tender and well-rounded vision of Chris that Jessie offers us could be allowed to exist outside these terrible mechanisms of proving his human worth.

But perhaps empathy is a ladder, one that people can't climb without first being coaxed on to its bottom rungs. And what Purcell has written is so immersive and fiercely loving, and so important in its depiction of real friendship and the experience of trembling on the cusp of the rest of your life, that I can't help but believe it will achieve that and more.

Ultimately, This is Not a Love Letter is, in fact, just that — a long, beautiful, heart-breaking love letter to potential and possibilities and hope, to the pain we survive in youth and carry with us into adulthood.