Accessibility links
Empathetic 'Anatomy Of A Scandal' Does Justice To A Dark Subject Rape has become a standard feature in crime novels — sometimes treated with nuance, sometimes with voyeurism. Sarah Vaughan's Anatomy of a Scandal approaches it with unexpected attention and care.

Empathetic 'Anatomy Of A Scandal' Does Justice To A Dark Subject

Empathetic 'Anatomy Of A Scandal' Does Justice To A Dark Subject 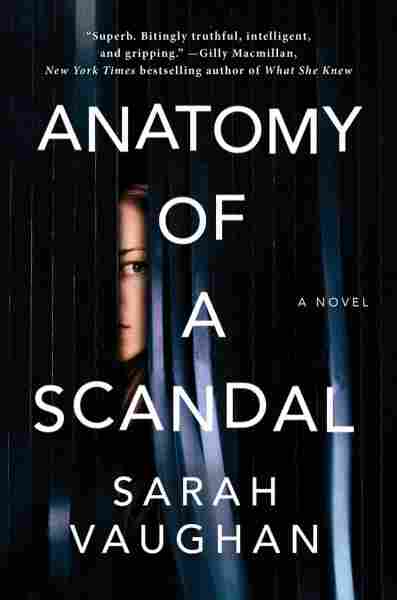 Anatomy of a Scandal

Editor's note: This review contains spoilers. Read on at your own risk.

Rape has become such a standard feature of crime novels that a literary prize was launched last month for the best thriller "in which no woman is beaten, stalked, sexually exploited, raped or murdered." I felt weary recognition when I read about the Staunch Prize; I could build a fortress out of all the rape thrillers I get sent in the mail each month. You know the types: For men, something about a hardbitten, boozy detective solving some gruesome rape and murder of a young blonde girl; for women, a gauzy black cover, "Girl" or latterly, wokely, "Woman" in the title, maybe an unreliable narrator, possibly an abusive boyfriend. They stack up, and with them, a kind of exhaustion. "Reading anything fun?" my friends will joke.

But within the world of books and TV where rape is a central plot point, there is a chasm between works that treat it with nuance, and ones that derive a dark energy from it, that try to make it part of the thrill. The difference is easy to see. Think of the barely-veiled eroticism of the rape scenes in Game of Thrones — the gold-lit tapestried bedrooms, the camera's horrible, charged lingering on women's quivering mouths and filling eyes. Perhaps the goal shouldn't be to stop writing about it, but to do it better.

Anatomy of a Scandal is in many ways the standard middlebrow crime fiction indicated by that familiar gauzy black cover — female protagonist with a hidden past, clear but not elegant writing, and persistent but mild suspense. But Sarah Vaughan, who was previously a reporter at the Guardian, brings a sustained attention and care to the subject that ensures rape is never played for thrills, instead delving into complicated questions of consent and criminality.

The plot centers around three women: Kate is an emotionally detached barrister who prosecutes sexual offenders. Her quarry is James Whitehouse, a politician accused of rape by Olivia, his young researcher and erstwhile mistress. Meanwhile, his privileged wife Sophie, who until then had been "someone whose life has been as bright and solidly precious as a fat gold ingot," has to decide whom she believes.

We're familiar with the standard masked rapist of fiction. As Kate notes at one point, "Juries are keen to convict the predatory rapist, the archetypal bogeyman down a dark alley, yet when it comes to relationship rape, they'd really rather not know, thank you very much." This is only just beginning to change, and Vaughan's novel is interesting because it features a serial rapist who doesn't seem to know he is one. Moreover, his victims had been attracted to him and did consent (or would have) to sex in other circumstances — meaning Anatomy of a Scandal is balanced on the edge of our shifting attitudes towards rape.

One of the novel's other rich strains is the relationship between Kate and Sophie, who (spoiler alert) knew each other as undergraduates. Lesser authors might have set these women against each other, but Vaughan does something carefully subversive instead. In an early flashback to Kate and Sophie's university days, we're given a tableau of three people in an Oxford don's office: Sophie is the pretty B-student crossing and uncrossing her legs for the professor, Kate is the smart, chubby girl in Doc Martens feeling overlooked, and the don is the renowned scholar sitting there eyeing Sophie's legs.

'Anatomy of a Scandal' cleverly and cleanly undercuts some of the queasy hallmarks of its genre.

It's such a familiar setup: Hot girl versus deserving dweeb, vying for male approval. But instead of leaning into that ready-made cheerleader/nerd dynamic, and having us side with the nerd, Vaughan has Kate pipe up with a smart point — and then Sophie stops fussing with her legs and comes out with some good ideas, they have a good discussion, and then afterwards the two girls go off for tea. They become friends of sorts. What a wonderful, subtle bait and switch. The gross professor is beside the point. One girl doesn't have to win at the other's expense.

Anatomy of a Scandal is full of quietly revealing choices like that one, showing an empathetic and careful mind at work. "I am tired of man's inhumanity to man." Kate thinks. "Or rather, his inhumanity to women and children." The reason rape saturates books, TV, and film is that women are beaten, stalked, sexually exploited, raped, and murdered in real life.

Fiction is one way we have of examining our culture, and processing our experiences. Anatomy of a Scandal cleverly and cleanly undercuts some of the queasy hallmarks of its genre, the things that so often make reading about rape feel like participating in our own degradation. While it still happens, we'll keep reading and writing about it — in reckoning, in preparation, in fear, in anger — so we may as well read books that do it justice.