Accessibility links
Tamora Pierce Writes One For The Boys (But Just One) In 'Tempests And Slaughter' The beloved fantasy author is known for her heroic female knights and mages — but she says she wants to be fair to the boys with her new book, the story of one of her most popular male characters. 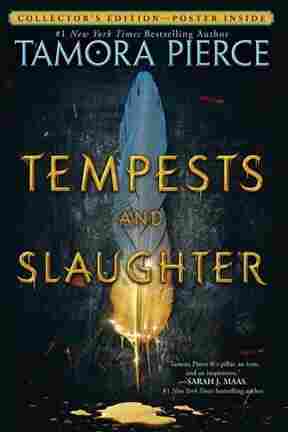 Tamora Pierce is a fantasy author who has been beloved for so long that both our books editor and producer — 12 years apart in age — kept her books in their school lockers.

Pierce started out as one of J.R.R. Tolkein's heirs — but over the last few decades has expanded the realms of high fantasy to consider issues of gender, race, war and violence. Fellow fantasy writers cite her as an influence, too, as you can see if you flip through the blurbs at the front of her new book, Tempests and Slaughter.

Tempests is the first book in a new series, the Numair Chronicles. "It is the story of a very popular character," Pierce says. "He's an incredibly powerful wizard, or as they're known in my universe, mage. And this is his story from the time he was about 10 or 11 or 12." Arram, the young man in the book, is also Pierce's first male protagonist in a career of writing about female knights and mages.

On writing her first male hero

I thought it was fair. I thought I owed the boys some. And Arram is so popular, and gets into so much trouble, that I knew I could do it. Which was an act of hubris on my part that still leaves me breathless. See, I'm kind of notorious for one thing in particular as a writer — I'm pretty straightforward about teenagers and sex. I've lost count of the mothers and father's who've come up to me and said, "Thank you for explaining it to them." The thing was, in my first book, I had a girl disguised as a boy. And when you're a girl disguised as a boy, going through puberty, the changes in your body become a major part of the plot. So I just stuck with it as I went on. And when I was working on this book, I got to a point and I went, "Oh my god, I can skip it, but that wouldn't be right." So I went to my writing partner, Bruce Coville, and first he laughed himself silly at me, but all those embarrassing little questions, he answered them for me. But it was important, it had to be done. I had to be as fair to the guys as I was to the girls. Which is one reason why I'm going back to girls after this is over.

On her beginnings as a writer, in the sixth grade

I'd tell myself stories while I did the dishes, and what [my father] said was, "You should write a book." And if he thought so, it was important to me, so ... I asked him what I should write about. And he thought about it for a minute, and he says, "How about travels in a time machine?" And the thing that really made it, that told me more than words — because he wasn't that kind of guy — that this was a big deal for him, he said I could use his typewriter. And up until that moment, if I had touched the typewriter, I would be missing that hand today.

I don't know, I think they would have happened anyway. The third wave of feminism really gave young women permission to just break out. The idea that yes, you can be a strong women, but there are roles opening up in traditionally masculine fields, and if they're opening out here, then why can't they open out in fantasy?

On whether she sees current events like #MeToo reflected in fantasy

I try very hard to include elements of reality in everything I do. I think the one thing fantasy does, and science fiction as well, is we give kids exposure to parts of the real world at a safe distance, so that they can read about it and think about it, and turn it over, close the book, go away, talk about it with people they trust, then come back and think about it again. So definitely, the #MeToo movement, I would like to see way more of that, because I've been so energized by women finally coming forward and people having to listen to them. That is just so important to me.

This story was produced for radio by Barrie Hardymon and Samantha Balaban, and adapted for the Web by Petra Mayer.