Accessibility links
Not My Job: We Quiz Nobel Prize-Winning Scientist Michael Rosbash On Barflies The biologist, whose groundbreaking research into circadian rhythms studied fruit flies, answers three questions about people who spend too many nights in bars. 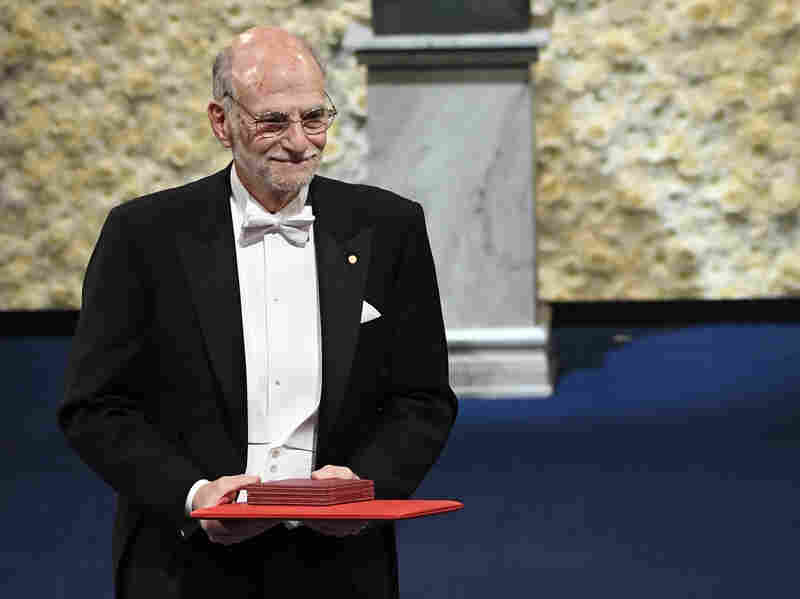 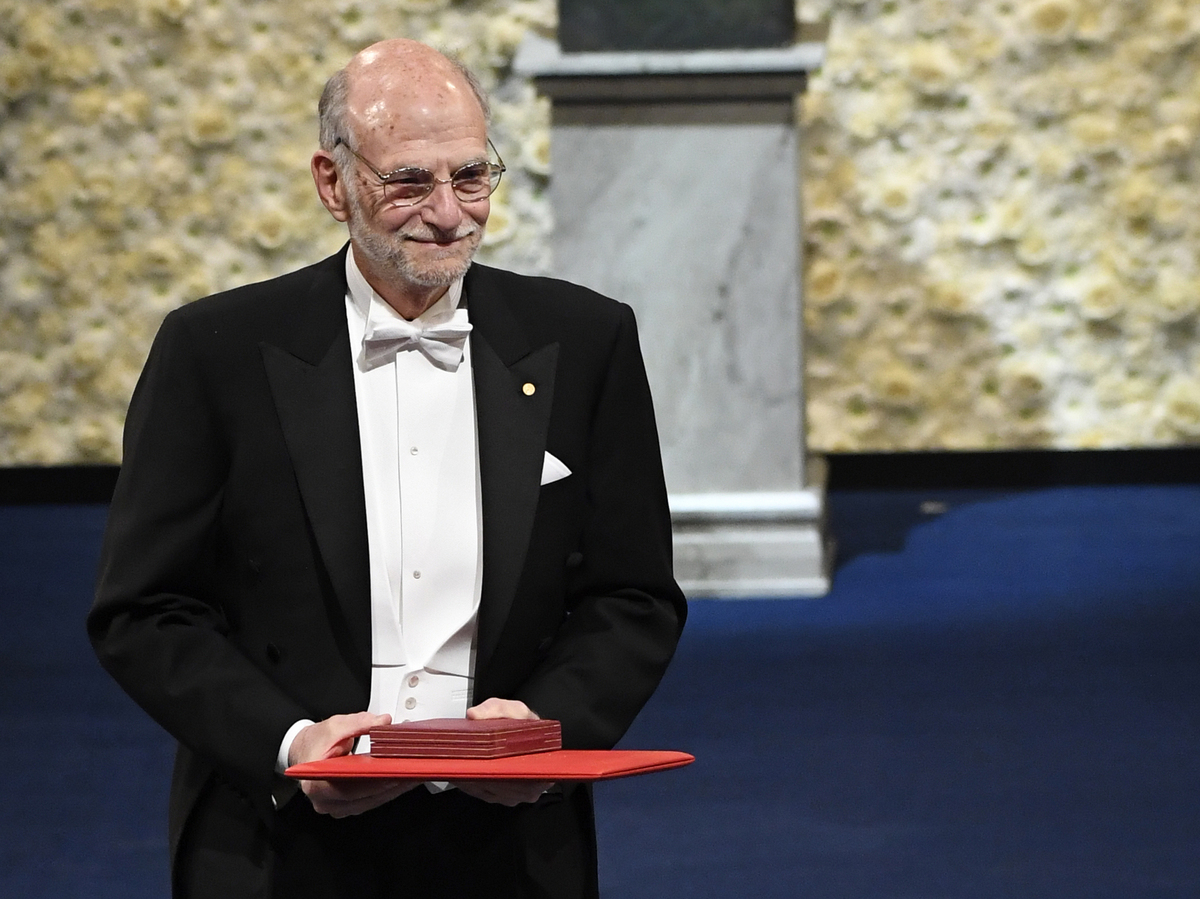 Most animals on earth sleep during the night and are awake during the day, except for the other animals that do the opposite, like raccoons (and Elvis Presley). But why? How do animals set their internal clocks? It was a mystery for centuries, but now we know thanks to Michael Rosbash and his colleagues, who won the 2017 Nobel Prize in Medicine for figuring it out.

Rosbash's crew used fruit flies for their research on circadian rhythms, so we asked him three questions about barflies — the people who seem to spend both days and nights perched on bar stools.

And now the game where we ask really smart people about really dumb things - it's called Not My Job.

So most animals on Earth sleep during the night and are awake during the day, except for the other animals that do the opposite, like raccoons and Elvis Presley. But why?

How do animals set their internal clocks? It was a mystery for centuries, but now we know, thanks in part to Dr. Michael Rosbash, who won the 2017 Nobel Prize in medicine for figuring it out. He joins us now.

Dr. Rosbash, welcome to our show.

SAGAL: How are you?

ROSBASH: It was. We sang four of his songs at the ceremony, the three of us.

SAGAL: Did you really? Because Dylan himself wouldn't show up, you guys had to do it?

SAGAL: So first I want to check, did I describe, broadly speaking, your Nobel Prize-winning discovery correctly? It's about the biological clock. Right?

ROSBASH: Good enough. Yup, you did.

SAGAL: All right. Thank you. I would get a decent grade in your class at Brandeis?

ROSBASH: Grade inflation not withstanding, you'd get a B-minus.

SAGAL: Ah. Thank you for being honest. Now I understand that you did your research into biological clocks with fruit flies. Right? You're one of the many scientists who work with fruit flies.

ROSBASH: We do. This is the fifth Nobel Prize for fruit flies, by the way, in the history of the Nobel Prize.

POUNDSTONE: Did the medal kind of weigh on their little necks?

SAGAL: It doesn't seem fair, when you think about it, that you guys get the medals and they do all the work.

ROSBASH: We said the day we won - there were three of us, of course, not just as me - that it was a great day for the fruit fly.

SAGAL: Yeah. Do you - I've always wondered about this because so many scientists work with fruit flies because they reproduce quickly and the genome is known. Right? Do you ever get, like, attached to the little guys?

ROSBASH: Absolutely. My partner at Brandeis - the guy I collaborated with for 20 years - he would come in every morning, turn the lights on in his lab and he'd say to all the bottles of fruit flies - hello, boys. Did you miss me?

SAGAL: I read that in regard to your work on the biological clock that - and I love this because it's such a cliche of, like, the mad scientist - that nobody thought that your research into this area would actually bear any fruit, as it were.

ROSBASH: Right, that we were taking a flyer.

SAGAL: Did they tell you to buzz off, professor?

POUNDSTONE: Somebody needs to do research into why people react so violently over a pun.

POUNDSTONE: But, you know, in my biology class in high school - and I'm not suggesting it was in any way the same thing, sir - but they were in a test tube and we put them to sleep all the time with, like, ether or something.

POUNDSTONE: Yeah. Well, then how do you tell when they sleep regularly?

ROSBASH: If you don't use the ether.

SAGAL: That's how he got a Nobel Prize.

ROSBASH: To be serious just for a moment, the remarkable thing is we were working in fruit flies, and it turned out that other people, after we started, found out that exactly the same proteins and mechanism operates in humans.

SAGAL: Wow. So does that mean that fruit flies...

ROSBASH: Yes, they also sleep like humans. I mean, they're our cousins. That's why...

POUNDSTONE: They are not.

POUNDSTONE: What school do you work at again? That's ridiculous.

ROSBASH: I was going to say except for a few people for whom they're their siblings.

POUNDSTONE: Boy, that's an awkward family reunion when you're having a picnic outside and you swat your cousin. Oh, Jesus.

SAGAL: Let's talk about actually getting the Nobel Prize. I assume it works - I've heard you get a phone call from out of nowhere. Is that how it works?

ROSBASH: Out of nowhere. It's 5:10 in the morning East Coast time. Exactly.

SAGAL: Well, I was wondering about this because, you know, you work in science. You've been doing it - working in science for a long time. You've gotten recognition for your work. So isn't it true that, deep inside, you would know that if the phone rang really early in the morning - before a reasonable hour - it was either a terrible tragedy had happened somewhere or it was a Nobel Prize?

ROSBASH: That's absolutely true, and both thoughts went through my mind. And there were two others. One that it was a prank...

ROSBASH: ...You know, from one of my dear friends. And the fourth, of course, was that, as the gentleman with the Swedish accent started to talk, I thought maybe this is going to be like "La La Land," you know. And they're going to get halfway through the announcement and say, oops, wrong envelope.

SAGAL: And they actually give the Nobel Prize to "Moonlight." Really. So did you say, are you serious? Is this real? Did you, like...

ROSBASH: I said, you're kidding me. Then, my wife said to me, start breathing, please. You're white as a sheet.

SAGAL: Were your friends - did your friends treat you any differently? Because this must be a big deal. Not every scientist gets this.

ROSBASH: No, my friends treated me exactly the same. But a lot of other people treated me differently. I will say that.

ROSBASH: And it's actually remarkable. In Sweden, we're absolute rock stars. You thought you were Mick Jagger.

ROSBASH: It's amazing. And not just scientists - from everybody. People came out of the kitchen at a restaurant. You know, they want to take pictures.

SAGAL: Oh, wow. When you say you're like Mick Jagger, were there Nobel groupies?

HONG: Yes. The answer is yes.

SAGAL: Well, Dr. Rosbash, we are delighted to talk to you about fruit flies or anything else. But in fact, we have asked you here to play a game we're calling...

SAGAL: That was terrifying.

SAGAL: So as we have discussed, you work with fruit flies all day. So we thought we'd ask you three questions about another kind of fly - barflies.

SAGAL: Answer two questions about people who never leave the bar stool, and you'll win a prize even more valuable than a Nobel for one of our listeners, the voice of anyone they like on their voicemail.

Bill, who is Dr. Rosbash playing for?

SAGAL: OK. You ready to do this?

SAGAL: All right. First question - famous barfly Jack Kerouac once went on a bender with some big consequences? What? A, what is believed to be the first drunk dial in history, he called Allen Ginsberg and they talked for 14 hours straight; B, he got so drunk he enlisted in the Army, Navy, Marines and the Coast Guard all on the same day; or C, he drove off the road?

ROSBASH: I have this vague recollection of A.

SAGAL: That he, like, did a drunk dial and called Allen Ginsberg and talked for 14 hours?

SAGAL: I'm afraid it was actually the second one. He enlisted in every branch of the armed forces.

SAGAL: I guess he couldn't can decide. So why not all? He actually showed up for Coast Guard duty. There's no record of him actually showing up for any others.

All right, you still have two more chances here. The most famous barflies of the modern era are the fictional ones in the TV show "Cheers" that ran on NBC for 11 years - huge hit. How did the cast and crew celebrate the airing of the show's final episode? A, they aired a real live Alcoholics Anonymous meeting immediately after the show to make amends; B, they got really drunk and then they all appeared live on "The Tonight Show"; or C, they had a screening for the cast and crew of the final episode of "Mama's Family," which they said they preferred to their own show.

ROSBASH: I'll go with B.

SAGAL: You're right. They all got really drunk...

POUNDSTONE: I remember that.

SAGAL: ...At the bar in Boston that inspired the locale. And then they all went on "The Tonight Show" and apparently misbehaved terribly.

HONG: Oh, that sounds so fun.

SAGAL: Yeah. All right, you're doing very well here. This is your last question. You get this right, you win for your listener.

One of the most famous literary barflies was, of course, Ernest Hemingway. In fact, he loved one bar he frequented in Key West so much, he did what? A, set up a bedroom in the back room so he never had to go home; B, stole a urinal and installed it in his house; or C, married three of their waitresses in succession.

ROSBASH: Let's do A.

SAGAL: You're going to say A, that he set a bedroom in the back room so he never had to go home?

SAGAL: So that he stole a urinal from the bar, he loved it so much.

SAGAL: That's what he did.

SAGAL: Apparently the bar was being demolished. And Hemingway said, I have basically poured so much money indirectly into that urinal, I own it. And he took it. And you can still see it, I am told, in the garden of the Hemingway House in Key West, if you're inclined to do so.

Bill, how did Dr. Michael Rosbash do on our quiz?

KURTIS: The doctor squeaked out a win. And you earned that Nobel Prize, doctor.

SAGAL: Yes, he did. Wasn't certain till now.

SAGAL: Dr. Michael Rosbash is a winner of the 2017 Nobel Prize in medicine. Dr. Rosbash, thank you so much for joining us on WAIT WAIT... DON'T TELL ME.

SAGAL: In just a minute, it's a bookish Listener Limerick Challenge. Call 1-888-WAITWAIT to join us on the air. We'll be back in a minute with more WAIT WAIT... DON'T TELL ME from NPR.