Accessibility links
Are Philly Fans Really The Worst? As the Philadelphia Eagles gear up for Sunday's Super Bowl against the New England Patriots, we look into whether Philly's sports fans deserve their reputation as the country's worst-behaved. 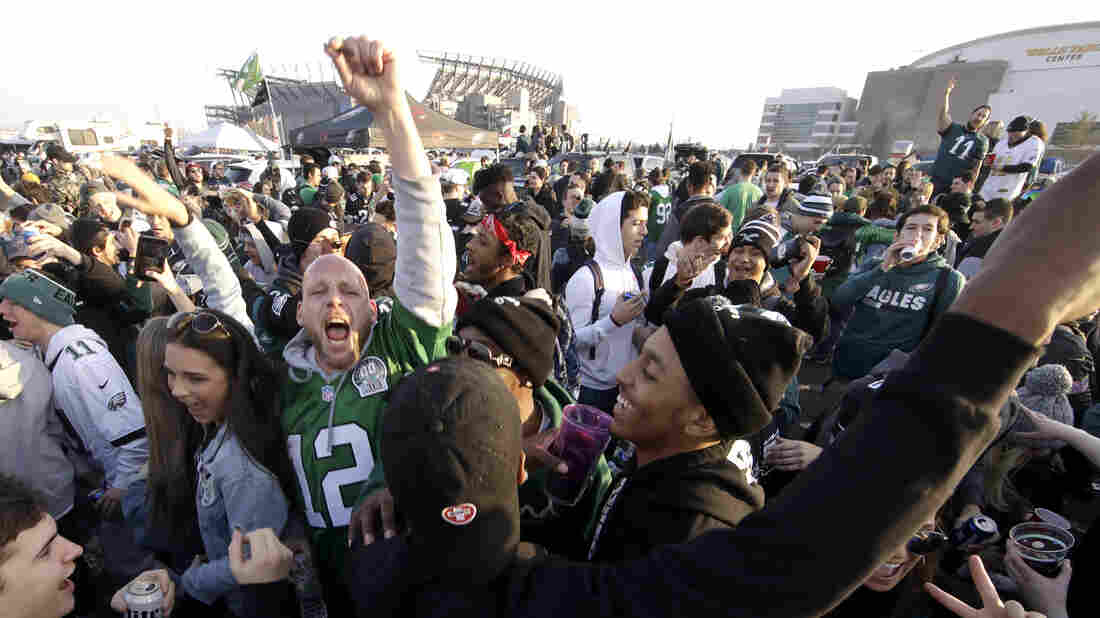 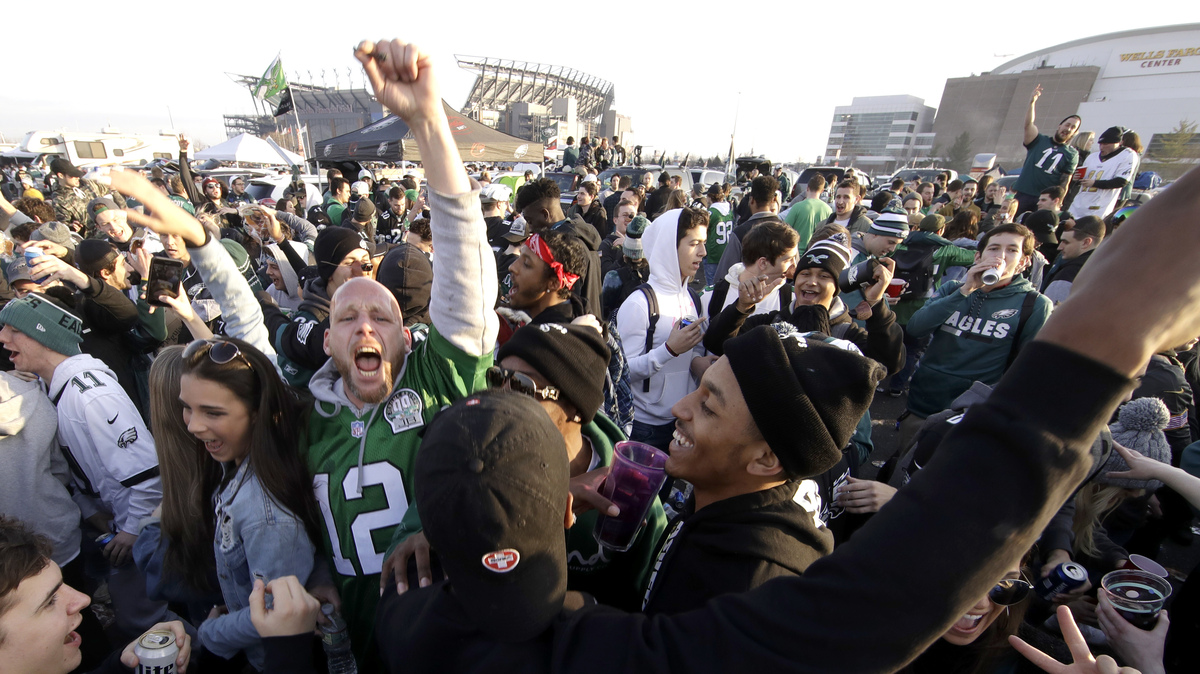 Fans tailgate before the NFL football NFC championship game between the Philadelphia Eagles and the Minnesota Vikings Sunday, Jan. 21 in Philadelphia.

Philadelphia Eagles fans are considered some of the most passionate and loyal in the NFL. They're also regarded as some of the league's worst.

They're so unruly city workers tried — and failed — to discourage Birds fans from climbing street poles after the NFC title game by slathering them in Crisco.

They're so wild that police arrested a fan for allegedly punching a state police horse in the face before kickoff that day.

"Eagles fans kind of take it a step further than most other fanbases," says Mark Liftin, a lifelong New York Giants fan. "They kind of wear their reputation as being a little psychotic as a badge of honor."

Eagles fans, naturally, disagree with that assessment. They say the overwhelming majority of people behave themselves, and that it's a few bad apples that spoil the bunch.

The "knuckleheads," as sports radio host Glen Macnow calls them.

"Eagles fans are loyal, hardworking, long-suffering, terrifically dedicated, ardent fans, who unfortunately get lumped in with the one-half of 1 percent who are in fact Visigoths," Macnow says.

To die-hard fan Michelle Mockus, the bad reputation persists for a simple reason: It's clickbait for national media outlets.

"It's Daily Mail-level juicy," says Mockus. "People love to see these kinds of things. They want to feel bad about Philly."

In 1968, the team wrapped up a miserable, two-win season with a home loss against the Minnesota Vikings. The team planned a Christmas pageant for halftime, but when the professional Santa Claus they hired didn't show up, they pressed into service a skinny, slightly drunk fan already dressed the part.

It didn't go over well. The crowd, already upset about the game and the season, pelted the psuedo-Santa with snowballs.

Three decades later, the Eagles installed a courtroom in the basement of the team's old stadium, where an on-duty city judge handed out fines for disorderly conduct.

Seamus McCaffery, who presided over the stadium courtroom, says a lot of the incidents were soaked in alcohol.

"It went from anything to urinating in the sinks, for example, in the bathrooms. It went to urinating on the sidewalls. It went to rowdy, abusive behavior to the point where police were intervening just before blows occurred," McCaffery says.

Despite all that, he still thinks Eagles fans are unfairly maligned: "I'm hard-pressed to believe that other stadiums don't make their fair share of arrests for public intoxication, things along those lines."

He's not wrong. In 2011, three fans were hospitalized after violence at a San Francisco 49ers game; New York Jets fans have made a halftime ritual out of asking women to flash them.

But Philadelphians are still routinely singled out, and not just the Eagles fans. Fans of the city's hockey, baseball and basketball teams are considered just as notorious.

It's why Liftin, the New York Giants fan, won't even consider going to an Eagles home game with his friends from Philadelphia.

"I'd be lucky to make it out with the jersey on my back," Liftin says.

The White Plains, N.Y., resident has previous firsthand experience with rowdy Philadelphia sports fans. At a baseball game years ago, Liftin said Phillies fans spit at him for wearing a New York Mets hat. A teenager slapped him.

Macnow, the radio host, doesn't condone that kind of behavior. It does bother him that Philly fans, especially Eagles fans, are given such a hard time, but he says he's come to terms with it.

Battle Of The Super Bowl Playlists: Philly Over Everybody

Macnow and other fans may find that easier to take if the Eagles win their first Super Bowl on Sunday.