Accessibility links
The Russia Investigations: 5 Takeaways About The Inescapable Nunes Memo Republicans try to redefine the Russia imbroglio as about abuse of government surveillance. What does that mean for DOJ special counsel Robert Mueller? 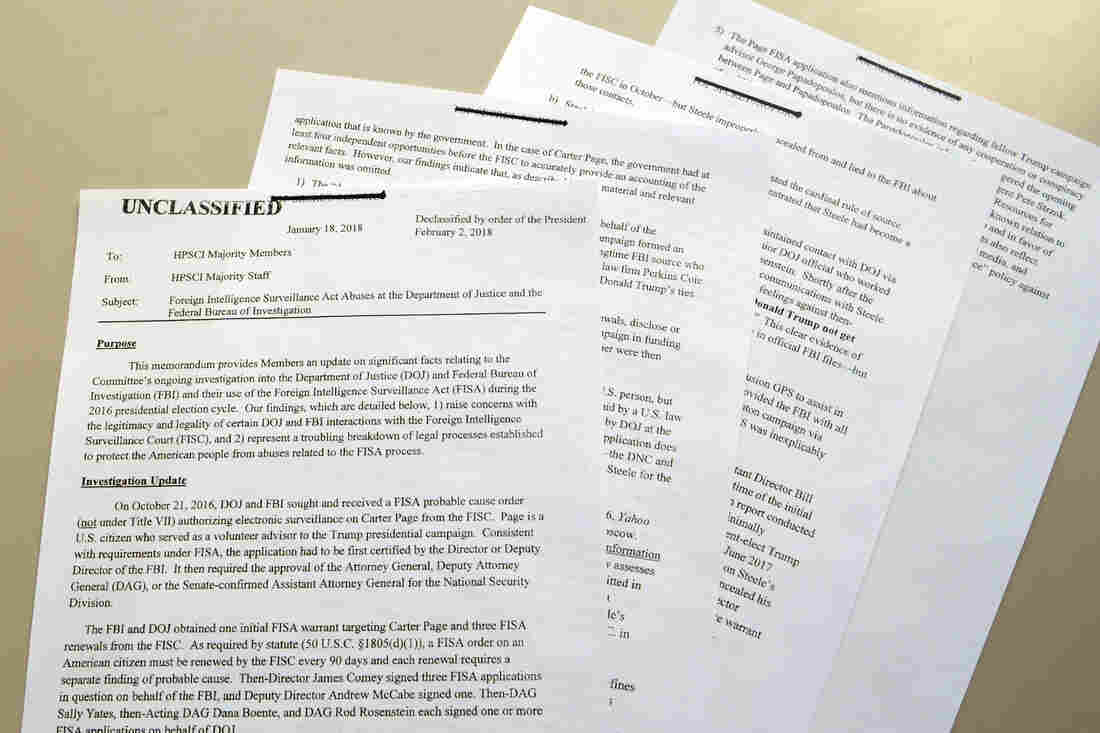 The Nunes intelligence memo is photographed in Washington, D.C., on Friday after its declassification and release. Susan Walsh/AP hide caption 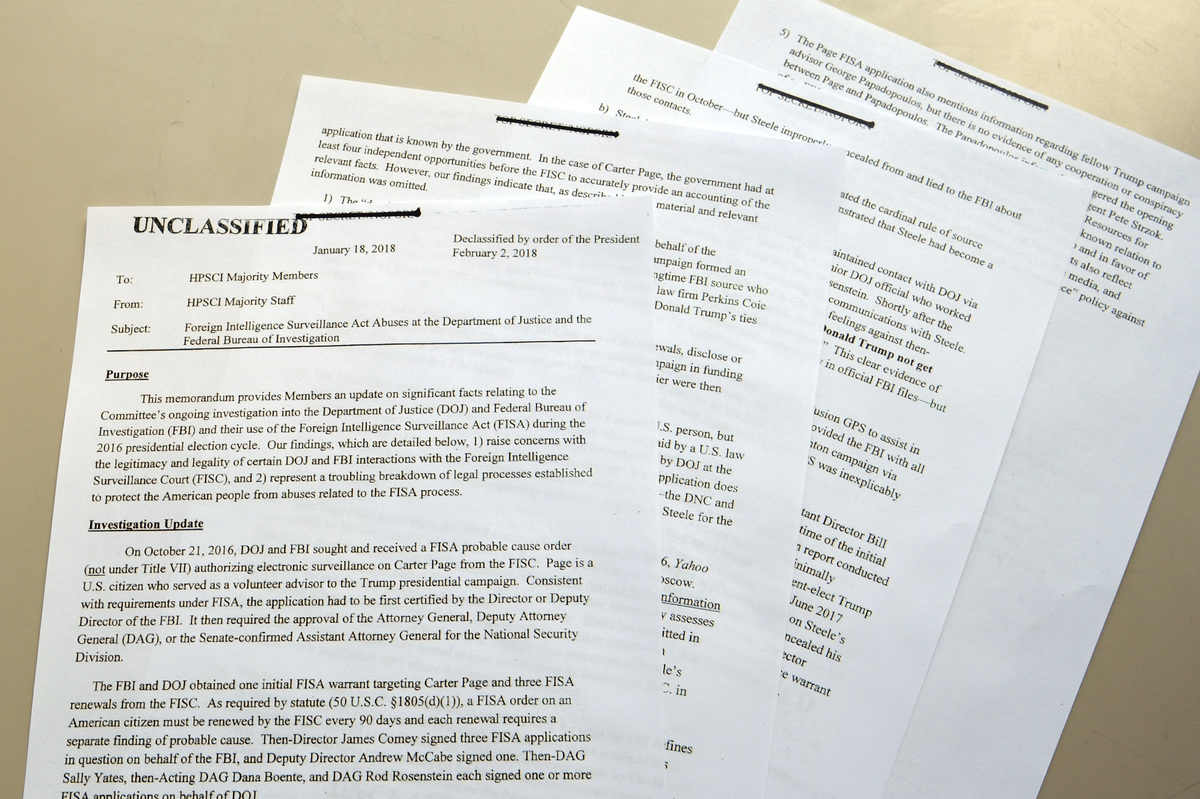 The Nunes intelligence memo is photographed in Washington, D.C., on Friday after its declassification and release.

This week in the Russia investigations: The much-talked-about memo finally made its public debut.

After a week of hyperpartisan madness that critics warn could shatter key D.C. institutions forever, the inescapable, once-secret spying memo wound up falling like a drop of rain into the Pacific Ocean.

There was no Friday Night Massacre in which the leaders of the FBI and Justice Department were pushed out the window or jumped on their own. The memo didn't even break much news — comments by members of Congress and reports in the press ended up setting the stage for it nicely.

But that doesn't mean it didn't have some points of interest, including these five takeaways.

1. The Steele dossier did not launch the DOJ Russia investigation. George Papadopoulos did

NPR and other news organizations have not detailed the infamous, unverified dossier compiled by former British spy Christopher Steele because its allegations about President Trump and Russia are unproven. That is why allies of Trump in Congress have sought to make the case that it's the germ of the whole Russia matter.

By drawing attention to its salaciousness and the prospect that it could be the product of Russian intelligence disinformation, they have sought to argue: If it's the sum total of the case for alleged collusion with the Russians or an alleged conspiracy between the Trump 2016 campaign and agents of the Kremlin, there is no case here.

But it's not the sum total of the alleged conspiracy/collusion case.

And in fact, the memo prepared by Rep. Devin Nunes, R-Calif., the chairman of the House Intelligence Committee, says that what "triggered" the FBI's investigation was evidence about onetime Trump campaign foreign policy adviser George Papadopoulos. He has pleaded guilty to lying to the FBI about his contacts with Russians.

According to court documents, Papadopoulos was offered dirt on Democratic candidate Hillary Clinton and high-level meetings with Russians early in the campaign. When that story — after a drunken night out at the pub — got back to Washington, D.C., the FBI opened its investigation. So it was already underway by the time the Steele dossier materialized.

Carter Page, like Papadopoulos, was a junior foreign policy adviser to the Trump 2016 campaign. He visited Russia at least twice in 2016 and acknowledged in an earlier interview with the House Intelligence Committee that he had met with government officials and others there. The core of the memo is that the FBI and the Justice Department used unverified material in the Steele dossier to ask the Foreign Intelligence Surveillance Act court to authorize surveillance of Page.

Republicans say that is the real problem here. In their telling, biased investigators didn't tell the court the dossier material was unproven political opposition research that had been funded by Democrats. But the memo doesn't say whether there might have been other evidence beyond the dossier — foreign intelligence intercepts or reporting from human sources — that also supported the warrant request. (And Friday night, The Washington Post reported that the FISA court "was aware that some of the information underpinning the warrant request was paid for by a political entity, although the application did not specifically name the Democratic National Committee or the Hillary Clinton presidential campaign," according to two U.S. officials.)

The Nunes memo also doesn't say that the FISA court requires that a warrant produce intelligence in order to reauthorize it. So however the FBI got its initial warrant for Page, the Nunes memo suggests that once surveillance of Page started, it continued producing foreign intelligence.

Officials from FBI Director James Comey in 2016 to Deputy Attorney General Rod Rosenstein — who was appointed by Trump and still serves in the Trump administration — have signed successive applications for warrants, the memo says.

3. Christopher Steele is a never-Trumper

The former British intelligence officer and dossier author Christopher Steele has remained a silent cipher in the middle of the Russia imbroglio. He hasn't been heard from publicly since his document exploded onto the scene.

The Nunes memo released on Friday, however, makes it clear that Steele was not a politically neutral actor.

Steele was commissioned by a Washington private intelligence company, Fusion GPS. It was hired first by conservative underwriters, then Democrats, to conduct opposition research about Trump in 2016. All the same, Fusion GPS' founder, Glenn Simpson, has told Congress that he did not instruct Steele to dig up dirt on Trump.

Rather, in his account, Simpson gave Steele an open-ended assignment to find out what he could from sources in Russia he had cultivated over his career. Steele, according to Simpson, was shocked by what he learned and volunteered on his own to report it all to the FBI.

Friday's memo complicates that picture. According to the Nunes memo, Steele told a contact at the Justice Department that he was "desperate that Donald Trump not get elected and was passionate about him not being president."

That, for Republicans, is more evidence that anti-Trump bias is at the bottom of the DOJ's Russia investigation. And the memo charges that although the FBI "recorded" Steele's feelings, it was "not reflected in any of the Page FISA applications."

Unlike the Nunes memo, however, those underlying documents, remain secret. 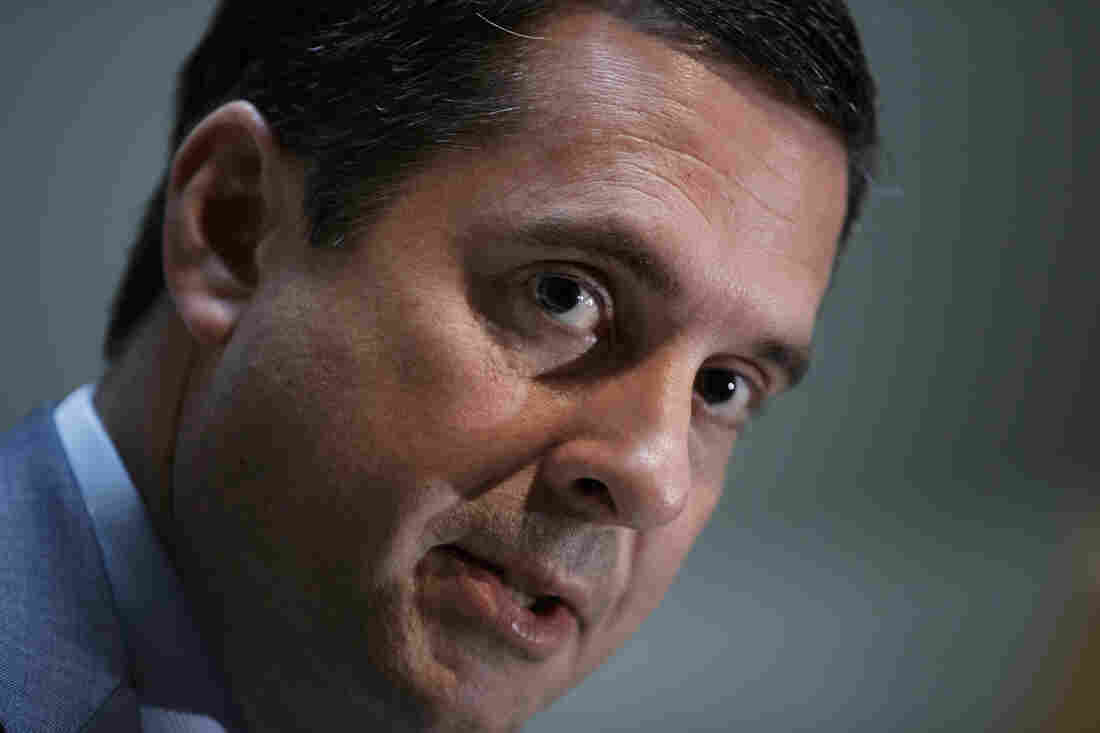 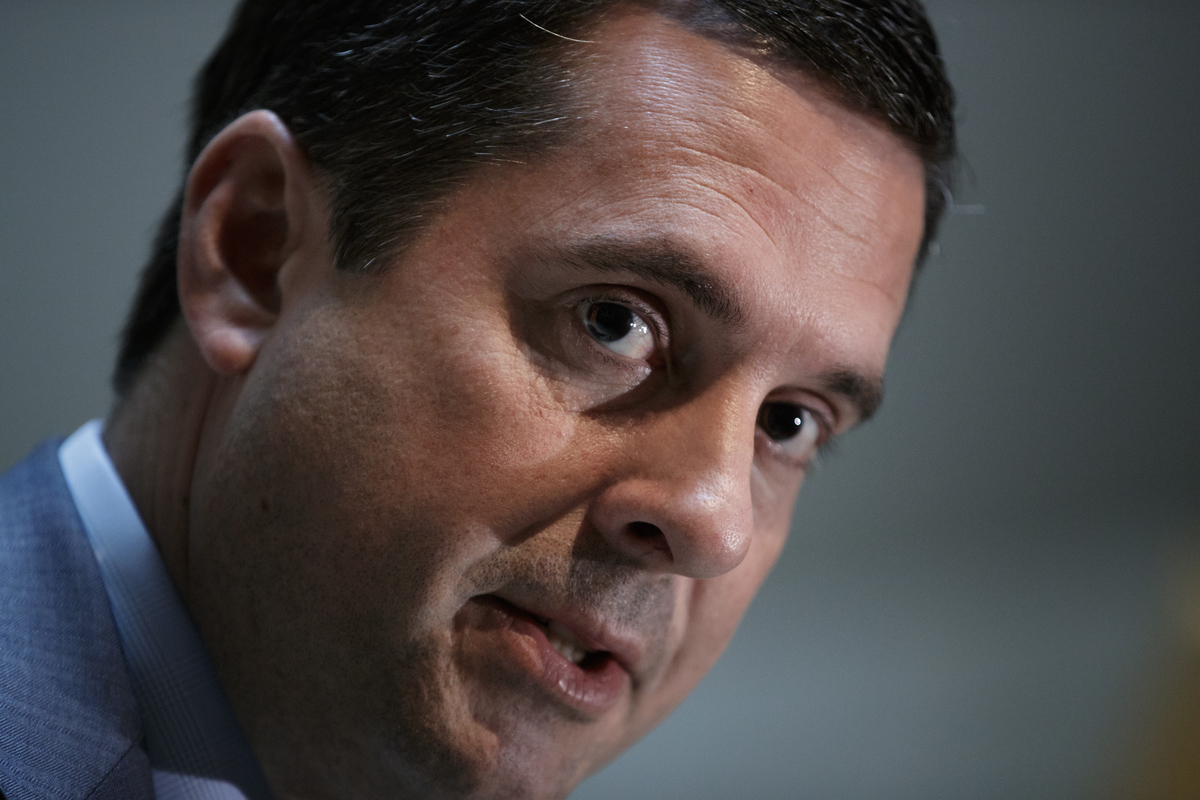 Simpson told Congress that one reason Steele broke with the FBI, which the Nunes memo also describes, was he felt the bureau wasn't taking him seriously enough. And Steele was mystified, in Simpson's telling, by a story in The New York Times in which FBI officials said they had no clear link between the Trump campaign and Russia.

But that story appeared on Oct. 31, 2016 — 10 days after the FBI and DOJ applied for their warrant on Page, according to the memo declassified and released Friday. The evidence now shows the FBI certainly thought there was a connection, and it has since become clear the bureau had been running a counterintelligence investigation since July 2016.

Was the Times' story a sin of omission by the FBI or one of commission? Did the people who talked with Times reporters Eric Lichtblau and Steven Lee Myers not know about the investigative work that was then underway — or did they mislead the reporters because they wanted to protect their work and not spook potential targets of the investigation in Trump world?

Further confusing the matter is a Washington Post story from April 2017. It describes a FISA warrant targeting Page "last summer," based in part on his trip to Moscow and what it calls prior contacts with Russian intelligence operatives.

Does that mean the Oct. 21, 2016, warrant application referenced in the declassified memo was actually a reauthorization of an earlier one? There is no independent accounting of events at this time to clear up these questions.

For the House Intelligence Committee's GOP majority, it's not a story about Americans potentially conspiring with a foreign attack on the democratic process. Instead, it's a story about abuse of power and a hapless martyr in Carter Page.

The memo saga sucked up all the oxygen in Washington, D.C., this week, but it remains to be seen whether it proves a tactical victory or a strategic one. Republicans' memo targeted the weakest aspect of the collusion storyline within the Russia imbroglio — a dossier that virtually no one defends — and singled out what they called politically biased FBI and Justice Department officials.

The collusion case has always been broader than the dossier. Several people in the Trump campaign had contacts with Russians, including Papadopoulos, Page, onetime Trump national security adviser Mike Flynn, now-Attorney General Jeff Sessions, Donald Trump Jr., then-campaign chairman Paul Manafort, Trump son-in-law Jared Kushner and others. Trump Jr., Kushner and Manafort hosted a delegation of Russians at Trump Tower in June 2016 following what was described to Trump Jr. as the Russian government's desire to support Trump's campaign by providing information about Clinton.

Rep. Adam Schiff Weighs In On How Memo Could Affect House Intelligence Investigation

Rep. Adam Schiff Weighs In On How Memo Could Affect House Intelligence Investigation

Trump's allies have pushed in all their chips on a strategy of tearing down federal law enforcement, within guardrails established by House Speaker Paul Ryan, R-Wis., to preserve the agencies' current leaders in their jobs. Trump has already fired one FBI director, James Comey, and reportedly wanted to fire the Justice Department's special counsel, Robert Mueller.

So although whatever Mueller's office yields will have been prefigured by months of attacks, including the Nunes memo, nothing in the document directly implicates Mueller or his current team. The question now is how much credibility Mueller, the FBI and DOJ will retain by the next time they act in their investigation.