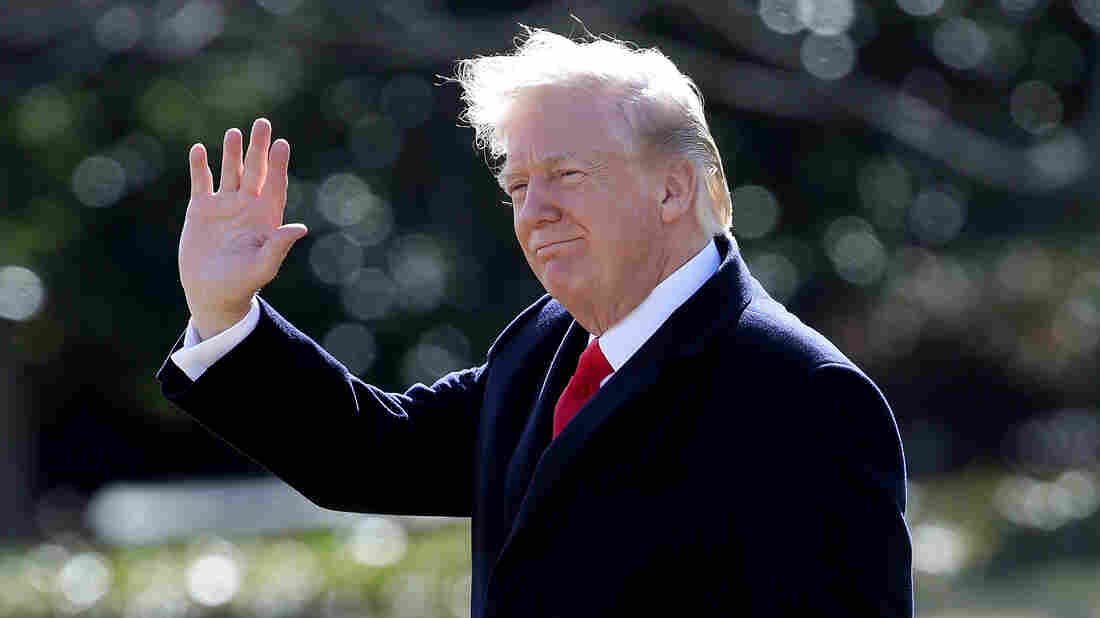 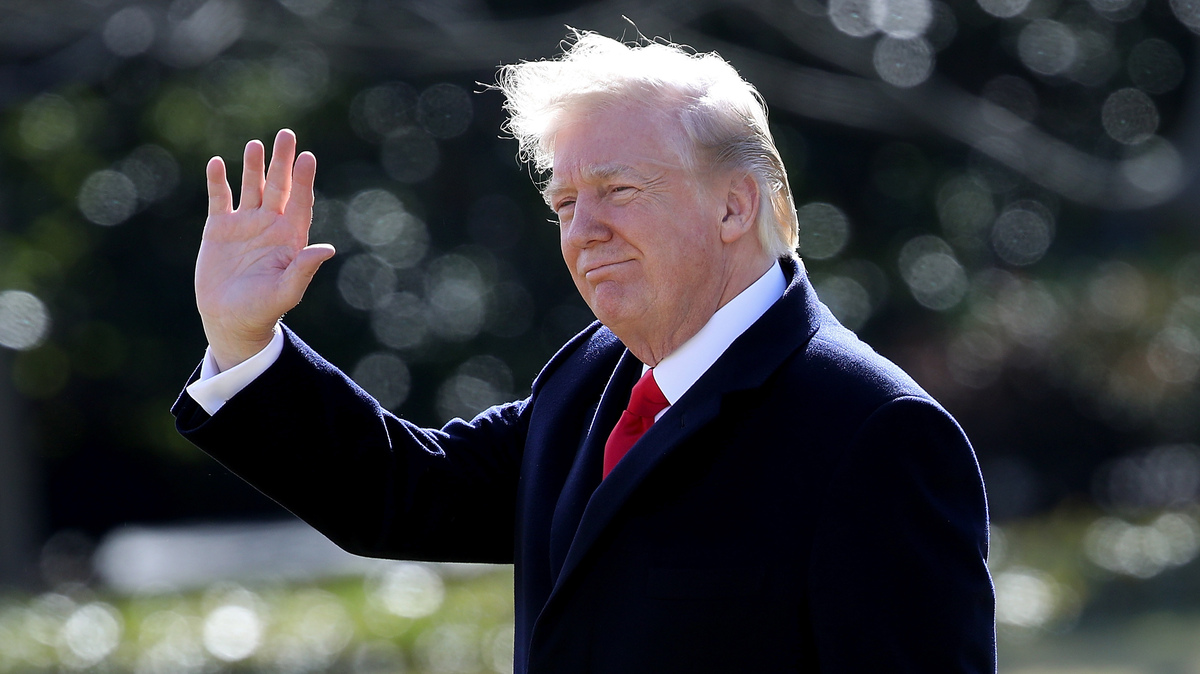 House Democrats went on the offensive Saturday amidst a controversy surrounding a memo released a day earlier that argues the Justice Department and the FBI abused their surveillance authority.

Rep. Jerrold Nadler, D-N.Y., the ranking Democrat on the House Judiciary Committee, released a 6-page rebuttal memo he's circulated to his colleagues and given to the media, including NPR.

The document lays out several arguments to counter the memo by Rep. Devin Nunes, R-Calif., the chairman of the House Intelligence Committee. The Nadler release was first reported on by NBC News Saturday, hours after President Trump had heralded the Nunes memo on Twitter, saying it "totally vindicates" him and calling the ongoing Russia probe "an American disgrace."

The Nadler document claims the Nunes memo is "deliberately misleading and deeply wrong on the law" in its central allegation of wrongdoing by the FBI and DOJ. It also says the Nunes memo "does not provide a single shred of evidence" that the information in the infamous, unverified Trump-Russia dossier was "inaccurate in any way."

Speaking Saturday evening with NPR's Michel Martin on All Things Considered, Nadler said he was worried the president would use information in Nunes memo as a reason to fire Deputy Attorney General Rod Rosenstein who is overseeing the Russia probe being conducted by special counsel Robert Mueller.

"Well it is a concern, because I don't believe anything that comes out of the White House," Nadler said. "You've seen them say they never threatened Mueller, but we know that the president tried to fire him, Mueller, and was stopped by his counsel."

Saturday morning President Trump took to Twitter to champion the release the Nunes memo, a previously-classified document that takes aim at the Justice Department and the FBI.

He tweeted: "This memo totally vindicates 'Trump' in probe. But the Russian Witch Hunt goes on and on. Their was no Collusion and there was no Obstruction (the word now used because, after one year of looking endlessly and finding NOTHING, collusion is dead). This is an American disgrace!"

This memo totally vindicates “Trump” in probe. But the Russian Witch Hunt goes on and on. Their was no Collusion and there was no Obstruction (the word now used because, after one year of looking endlessly and finding NOTHING, collusion is dead). This is an American disgrace!

Not long after the president's tweet, the top Democrat on the House Intelligence Committee, Rep. Adam Schiff, D-Calif., fired back with a tweet of his own: "Quite the opposite, Mr. President. The most important fact disclosed in this otherwise shoddy memo was that FBI investigation began July 2016 with your advisor, Papadopoulos, who was secretly discussing stolen Clinton emails with the Russians."

Quite the opposite, Mr. President. The most important fact disclosed in this otherwise shoddy memo was that FBI investigation began July 2016 with your advisor, Papadopoulos, who was secretly discussing stolen Clinton emails with the Russians. https://t.co/2rGOE1jGg2

In a series of tweets Saturday night, the president renewed his attacks on the Justice Department and the FBI, citing the Nunes memo and apparently quoting the Wall Street Journal. There is "No Collusion!" Trump also reiterated Saturday.

After anticipation gripped Washington, D.C., throughout the week — with fissures between the president, the law enforcement community and Congress — Republicans on the House Intelligence Committee made public a 3 1/2-page document authored Nunes after Trump declassified the memo and approved its release.

Since the Nunes memo's release, some Republicans have expressed sentiments similar to Trump's and seized on the memo's assertions raising doubts about the impartiality of the top FBI and Justice Department officials investigating Trump's 2016 presidential campaign and possible connections with Russia.

House Judiciary Committee Chairman Bob Goodlatte, R-Va., said in a statement Friday that he was "pleased" the American people could view the document, "which details abuses of the Foreign Intelligence Surveillance Act."

He also went on to praise the "vast majority" of FBI employees, before adding: "The contents of the memo continue to raise serious questions about decisions made by Justice Department and FBI leadership during the 2016 presidential election and afterwards, and the role senior FBI officials played in these questionable decisions and irregularities."

Fellow Republican Rep. Matt Gaetz of Florida tweeted Friday: "Not only did the Memo lay bare a systemic pattern of abuse within the FBI & DOJ, it confirmed my worst fear: America's free & fair elections were threatened from within. Our own DOJ worked to tip the scales of justice in order to benefit one political candidate. #MemoDay."

Nadler is one of many Democrats who have raised concerns that the Nunes memo's release is being used to lay the groundwork for the eventual firing of Deputy Attorney General Rod Rosenstein or the eventual end of the Justice Department's engagement of special counsel Robert Mueller, a former FBI director.

And in a letter sent to the president Friday signed by 10 top congressional Democrats including House Minority Leader Nancy Pelosi, D-Calif., and Senate Minority Leader Chuck Schumer, D-N.Y., warned that the lawmakers would consider terminations of the top leadership at the Justice Department or the FBI as "an attempt to obstruct justice."

"We write to inform you that we would consider such an unwarranted action as an attempt to obstruct justice in the Russia investigation. Firing Rod Rosenstein, DOJ Leadership or Bob Mueller could result in a constitutional crisis of the kind not seen since the Saturday Night Massacre."

The "Saturday Night Massacre" refers to the 1973 resignations of the attorney general and his deputy in protest of President Richard Nixon's order to fire an independent special prosecutor.

At the White House on Friday, before Trump left for a weekend stay at his Mar-a-Lago club in Florida, he was asked whether the memo's release made it more likely he would fire Rosenstein and whether he still had confidence in the deputy attorney general. He responded: "You figure that one out."

In an appearance Saturday on Fox News, deputy White House press secretary Raj Shah was asked whether Rosenstein was on the hot seat and attempted to play down those concerns.

"Rod Rosenstein's job is not on the line. We expect him to continue his job as the deputy attorney general," Shah said.

Many Democrats and even some Republicans have expressed concern about the release of the Nunes memo and the impact it could have on the Justice Department and intelligence community.

Trump, Nunes and others say the document shows that the FBI and the Department of Justice have been biased in their investigation of Russian interference in the 2016 election and possible connections between the Trump presidential campaign and Russia.

But others see the memo's release as a dangerous upheaval of established oversight norms in favor of partisan politics, in an effort to discredit the Mueller investigation.

Senate Armed Services Committee Chairman John McCain, R-Ariz., had one of the harshest rebukes, saying the memo's release did nothing but aid Russian President Vladimir Putin by undermining the legitimacy of American institutions.

"The latest attacks on the FBI and Department of Justice serve no American interests — no party's, no president's, only Putin's. The American people deserve to know all of the facts surrounding Russia's ongoing efforts to subvert our democracy, which is why Special Counsel Mueller's investigation must proceed unimpeded," McCain said in a statement Friday. "Our nation's elected officials, including the president, must stop looking at this investigation through the warped lens of politics and manufacturing partisan sideshows. If we continue to undermine our own rule of law, we are doing Putin's job for him."

NPR's Ryan Lucas reported that Nunes and other Republicans claim the memo shows that "anti-Trump Democrats within federal law enforcement used flimsy evidence that was paid for by ideological fellow travelers to scam a judge into authorizing the surveillance of" Page. That surveillance of Page was based on the unverified Steele dossier and funded in part by Democrats including the Hillary Clinton presidential campaign.

However, the memo also asserts that it was contacts between Trump campaign foreign policy adviser George Papadopoulos and Russians — and overtures from Russia to the campaign via Papadopoulos — that "triggered" the FBI counterintelligence investigation in Russia's election interference and contacts between Russia and Trump's campaign. Papadopoulos has pleaded guilty to lying to the FBI about his contacts with Russians.

Furthermore, after the memo's release Friday, three leading national newspapers reported that the special intelligence court that approved the warrant was made aware of the political underpinnings of the dossier.

"As I have publicly stated on several occasions, it's a mistake to release this memo," Dent wrote on Twitter Friday afternoon. "No Members of Congress-nor their staff-should risk divulging sensitive sources/methods of Intelligence for partisan gain. This sets a dangerous precedent that may have far reaching implications."

Schiff, the ranking member of the House Intelligence Committee, told NPR's Ari Shapiro on Friday's All Things Considered that the decision to release the GOP memo was "not only reckless but misleading."

"The procedure they used to publish this document has never been used before, and for good reason. The Congress shouldn't be cherry-picking intelligence and publishing it for political reasons," Schiff said.

Democrats' rebuttal memo is still classified after the committee voted along party lines not to release it alongside the GOP memo.

"I think the Republicans know it's really unsustainable for them to claim they're doing this in the interest of transparency but refuse to let the country see the response to it," Schiff said of that decision. Schiff also said Democrats on the committee plan to try to force a vote on releasing their rebuttal on Monday.

Rep. Eric Swalwell, D-Calif., another member on the House Intelligence Committee, said on CNN before Friday's release that "what this memo does is it seeks to torch every floor of the FBI building to protect the president."

"This unprecedented public disclosure of classified material during an ongoing criminal investigation is dangerous to our national security," Warner continued in a statement Friday. "This will make it far more difficult for the Intelligence Committees to conduct meaningful, bipartisan oversight of intelligence activities in the future. This action was also taken without regard to the damage it could do to our ability to protect Americans from threats around the globe."

Former FBI Director James Comey — whose firing last year by Trump contributed to Mueller's appointment to oversee the FBI investigation — tweeted that the memo's release was underwhelming and not worth the damage it did.

That’s it? Dishonest and misleading memo wrecked the House intel committee, destroyed trust with Intelligence Community, damaged relationship with FISA court, and inexcusably exposed classified investigation of an American citizen. For what? DOJ & FBI must keep doing their jobs.

Christopher Wray, who was picked by Trump to replace Comey as FBI director and who opposed the release of the memo, reminded bureau employees in an internal video released Friday that "in the end, actions speak louder than words."