Accessibility links
Twisty Thrills Propel 'The Burial Society' Nina Sadowsky's day job is high-level Hollywood producer, and it shows in the cinematic drive of her new thriller. But the book's nonstop action leaves little time for details of place and character. 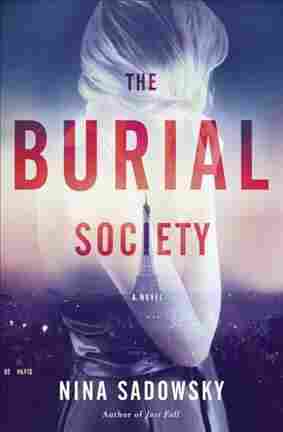 Catherine, the proprietor of a business known as The Burial Society, lives and works in Paris. At the beginning of Nina Sadowsky's novel — named after Catherine's endeavor — there's a glitch in one of Catherine's cases, most of them involving women on the run from violence. A Russian-born supermodel in hiding from her abusive husband turns up in recognizable and laughing in a fangirl's Instagram feed. How can Catherine keep her safe?

Wait. That's not the plot of The Burial Society. That's just a way into Catherine's work. When an American teenager named Natalie Burrows finds her father Brian dead in his their apartment, Catherine goes on alert — but doesn't tell us exactly why. Was Brian Burrows abusing his wife Mallory? Was Brian somehow connected to that supermodel, Elena? Who exactly is Frank Burrows, the uncle who appears to take care of Natalie and her older brother Jake?

Yes, there are lots — and lots and lots — of questions in this thriller, the second from Sadowsky, whose day job is in high-level Hollywood movie production (she was head of Meg Ryan's Prufrock Pictures and also produced The Wedding Planner). Sadowsky knows how to set a scene and when to move on to the next one, which is to say she also knows how to get readers turning pages. Natalie seems to be in great danger, and Jake in great trouble; meanwhile, Uncle Frank gets creepier and creepier and what does Brian's colleague Hank Scovell have to do with all of this?

The novel is divided into sections, some in the present, some in the past. Each "chapter" (some of them run to a single paragraph) has a title and a purpose akin to a film switchup: "3 Days Missing," "Steak Frites," "The Husband." The perspective switches from Catherine to Natalie to Frank to Jake to Catherine to Mallory to Natalie to Jake again and pretty soon your head will be spinning as you try to wind the various threads into some kind of meaningful pattern.

Pro tip: You don't need to. One of the pleasures of The Burial Society is that Sadowsky keeps a tight rein on the action; you just need to be properly strapped in to enjoy the ride. Unfortunately, this also leads to one the book's pitfalls, too; the constant action leaves little time for character development. Some of the characters have secrets that need to be concealed until the very end, or the twists and turns won't work — so their idiosyncrasies cannot be fully explained.

That's frustrating enough, but the truly maddening element is Catherine's elusive character. "I traffic in others' secrets, but I don't want anyone knowing mine," she says. Part of her job is to be an expert in the art of disguise, and readers are let in on that early, but it's not her various wigs and accents that make Catherine slippery. It's not even her various deeds, good and bad; many thriller protagonists, from Mr. Ripley to James Bond to Amy Dunne, have ambiguous moments.

One of the pleasures of 'The Burial Society' is that Sadowsky keeps a tight rein on the action; you just need to be properly strapped in to enjoy the ride.

No, Catherine's mystery is her motivation. She tells us that her elaborate setup, which includes a house with a luxurious apartment where rescued clients can live temporarily, is all so that she can save women. "If my manipulations make you squeamish," she shares at one point — and oh, they will — "remember that my goals are worthy." But why is she rescuing these clients? We get as little about that as we do about the city she lives in — though the little we get can be tantalizing, from after-hours sex clubs to cafés that serve "thick, sippable chocolate" drinks. Like her creator, Catherine is in complete control of how this story is told.

For those who've hung on, there is a kind of payoff at the end. Sadowsky clearly plans to continue writing about The Burial Society, and there will probably be a great deal more about Catherine's story in another book — or books. However, it will likely be doled out in bits as tantalizing as tiny sips from a cup of rich chocolate. If that kind of exquisite agony is for you, give The Burial Society a try, but don't say I didn't warn you about the wait.