Accessibility links
The Forgotten Renewable: Geothermal Energy Production Heats Up Experts say the American West is full of geothermal reservoirs whose energy could power millions of homes. But extracting that energy isn't easy. 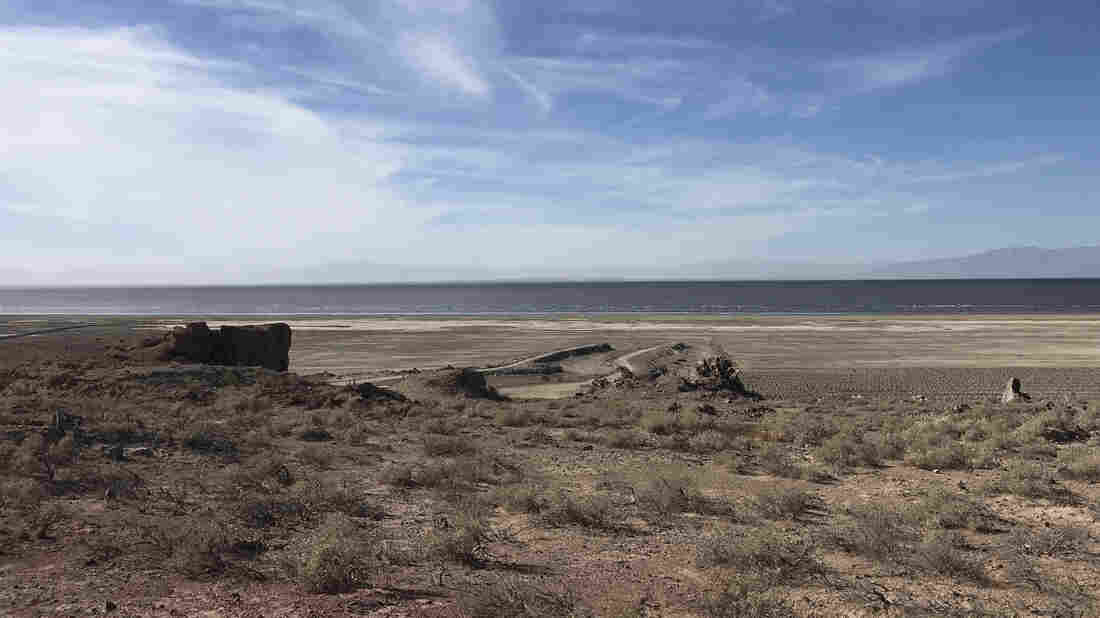 The ground beneath the Salton Sea is home to one of the most powerful geothermal resources in the country. Benjamin Purper/KVCR hide caption 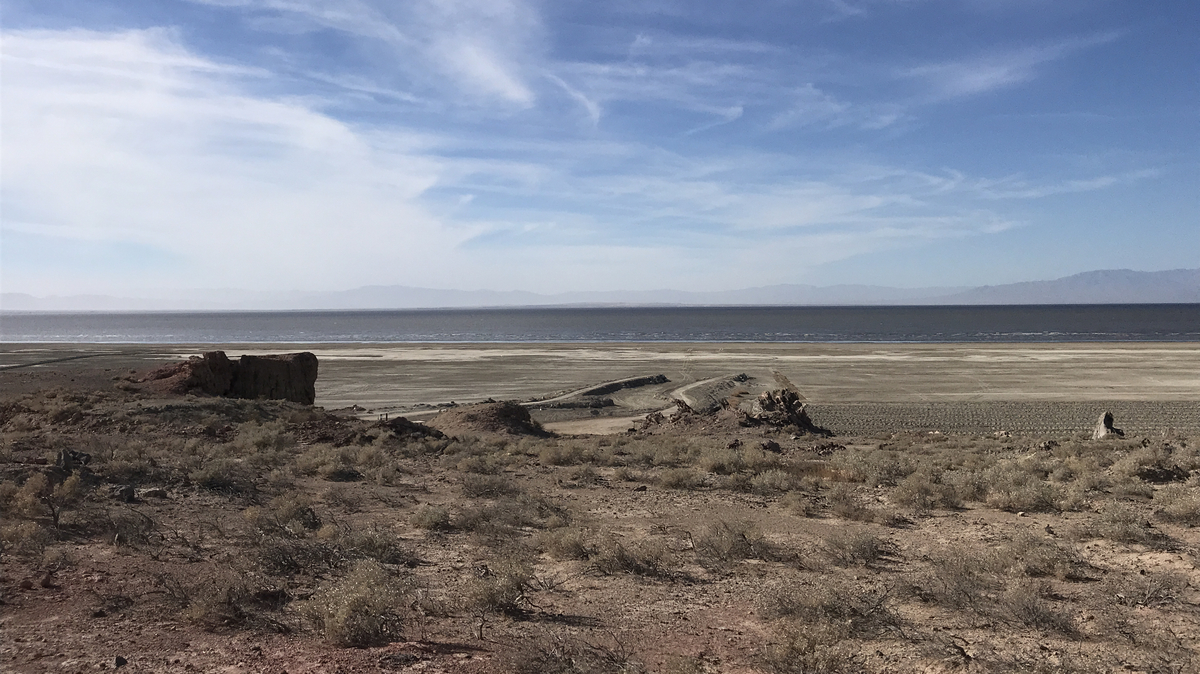 The ground beneath the Salton Sea is home to one of the most powerful geothermal resources in the country.

Three and a half hours east of Los Angeles lies the Salton Sea, a manmade oasis in the heart of the Mojave Desert. It was created in 1905, when a canal broke and the Colorado River flooded the desert for more than a year. The Sea became a tourist hotspot in the 1950's, perfect for swimming, boating, and kayaking. But now, people are coming here looking for something else.

Jim Turner is the chief operating officer of Controlled Thermal Resources, an energy company from Australia. On a hill overlooking the Salton Sea, he points out a patch of land that will someday house his company's first power plant, named Hell's Kitchen.

"We're standing on top of what is probably the most robust geothermal resource in the United States," he explains.

Geothermal energy uses the earth's natural heat to create electricity. While there are several different ways to accomplish this, the most common is to take super-heated water from geothermal hot spots and pipe it to the surface. It then turns into steam and spins a turbine, which generates electricity.

It's completely renewable, and generates clean energy around the clock, unlike wind and solar.

"You think of renewable energy as a house, solar is the roof and the wind is the walls," says Jason Czapla, principal engineer for Controlled Thermal Resources. "But geothermal's the foundation, and what California did is it built the walls and the roof, but on wild, windy days it blows too much rain on the roof [and] that house falls down. Well, the Salton Sea is this opportunity for California to fix that."

The company wants to develop 1,000 megawatts of electricity here over the next decade. They say that could power about 800,000 homes. And for a state that's aiming to get half its electricity from renewable sources, that's no small number.

"Our development coincides with the state's target, 2030 being the ultimate goal getting to 50 percent," says Czapla. "And our goal is to build up that 1,000 megawatts and help them increase the renewable energy portfolio."

But it's not just California that's got these resources.

Colin Williams, a geothermal expert at the U.S. Geological Survey, published a report in 2008 in which he explained that there are untapped geothermal reservoirs throughout the American West.

The report also elaborated on a developing technology that could drastically increase the amount of power the Earth can provide, called enhanced geothermal systems.

In order for a reservoir to be able to provide geothermal energy, it has to have three things: heat, water, and permeability. In other words: hot, wet rock, with enough fractures in it to allow water to pass through. Enhanced geothermal systems is the process of taking areas with only one or two of those conditions – hot, dry rock with very little fractures, for example – and altering it to satisfy all three conditions. That could mean cracking underground rock to allow more water to pass through, or inserting water into the rockbed to be heated.

Williams says scientists and engineers are still working on the technology for enhanced geothermal systems, but if they are able to make it a reality, that could potentially open up thousands of megawatts of energy potential from new reservoirs. And that could someday take from the country's current 3,000 megawatts of geothermal energy production to almost 500,000.

"To put that into perspective," Williams says," the entire electric power generating capacity in the United States is about a million megawatts." 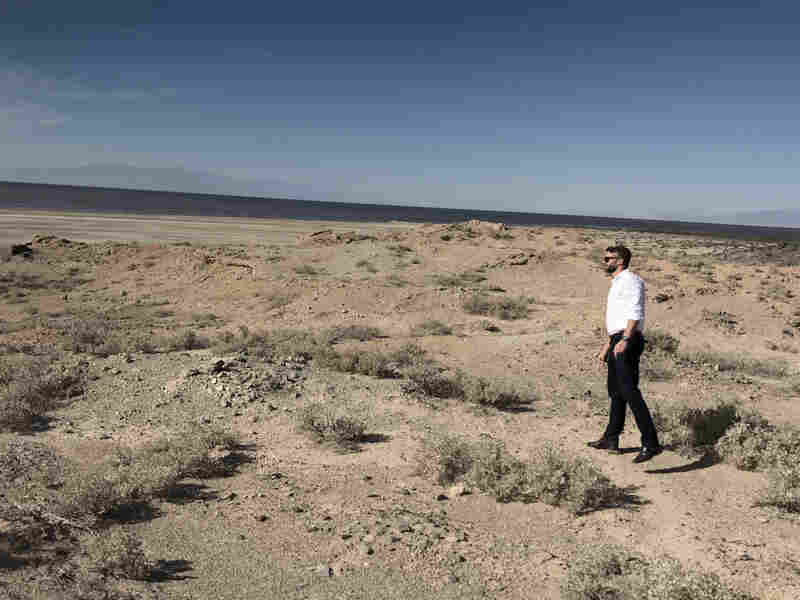 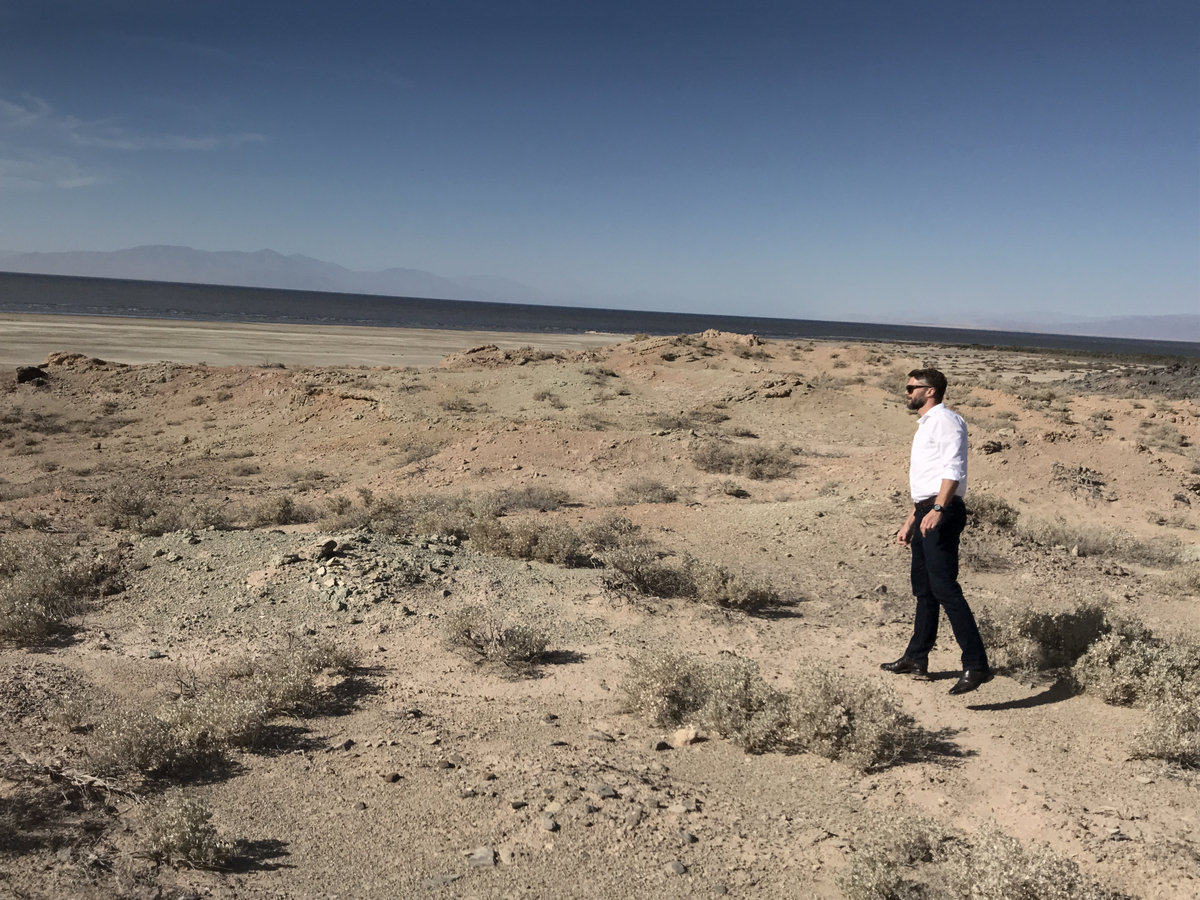 Jason Czapla, principal engineer for Controlled Thermal Resources, surveys the site where the company's Hell's Kitchen Plant will be built.

So if there's that much clean energy just waiting in the ground, what's taking so long?

Allyson Anderson Book directs the American Geosciences Institute, a nonprofit network of geoscientists around the country. She says that geothermal energy has been historically overlooked as a renewable energy source, to the point that it is sometimes referred to as the "forgotten renewable."

Book says there are social and technical challenges that have kept geothermal from becoming a major player in the energy field. The technology is complex, and plants are expensive to build.

"There's a lot of different factors that play in," Book says. "And so the Department of Energy right now is spending a lot of time and energy in something called the FORGE project."

But back at the Salton Sea, Controlled Thermal Resources isn't waiting on new technology — it's hoping to exploit what's already there.

In his office in El Centro, Calif., CEO Rod Colwell plays an aerial video of the southern end of the Salton Sea, where the Hell's Kitchen plant will go. It's still in the permitting stages, and it's going to cost a lot of money – around a billion dollars. But if it's successful, Colwell plans to build more. He hopes to build enough plants to be able to produce 1,000 megawatts of electricity, which could power about 800,000 homes. And with California looking to phase out its use of fossil fuels, that's no small number.

"Particularly in California," Colwell says, "we will not be able to import any carbon-fired energy after 2025. So it's important that geothermal is that integral value in the mix."

Geothermal's got a long way to go. But Colwell and others are betting that new technology and the demand for clean energy will someday bring this forgotten renewable to the forefront of clean power.

A previous Web version of this story said 1,000 megawatts of electricity could power about 1,000 homes. It should have said 800,000 homes.