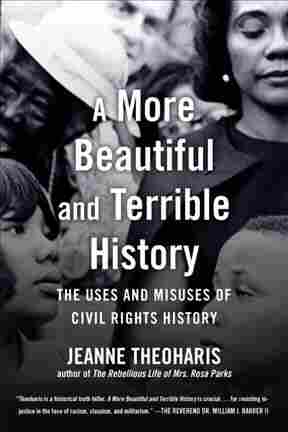 A More Beautiful and Terrible History

The Uses and Misuses of Civil Rights History

It's February, which means it's Black History Month, the time designated by Congress to focus on the contributions of African Americans to this country. Often that focus will turn to a celebration of the civil rights movement, and its many heroes and heroines: Rosa Parks, John Lewis and of course the Rev. Martin Luther King. What could be wrong with that?

According to historian Jeanne Theoharis, what's wrong with it is that the story is too often told in a way that neutralizes the past and makes it irrelevant to the present — in a word, whitewashing. She lays out her thesis in her latest book, A More Beautiful and Terrible History: The Uses and Misuses of Civil Rights History.

Theoharis says she was inspired by "going around the country ... and feeling how hungry people were, both for more substantive histories of the civil rights movement, but also to help make sense of why we get the fables, why we get the versions we get."

On the problem with how we're retelling the civil rights movement

To me, this history should humble us. And I think the way it is used and the way it's kind of taken up in our national, sort of, public discourse, is quite the opposite. It is used to make us feel good about ourselves, to make us feel good about our progress, as opposed to kind of take stock of what it took, of how hard it was, of how many people did not do the right thing, of how hard it is to do the right thing, and of how much farther we have to go. Because I think, oftentimes, people like King and Parks, the civil rights movement — it's held up with a happy ending, right? It's painful, it's dramatic, but then we have the happy ending of the Civil Rights Act and the Voting Rights Act. And it's clean.

And I think what a fuller history of the civil rights movement actually shows us, is there were certainly victories, there were certainly milestones that we are now again fighting to try to uphold. But there was much more work to be done, and people like Parks and King were adamant about that. Civil rights activists have taken on a huge place in the American consciousness, which would not be a problem necessarily if we actually knew who these people were, right? If we actually had a sense of the breadth of what they stood for and what they are asking of us today.

On how this filtered version of history obscures a deeper truth

Well, we see the civil rights movement, and we see these heroes invoked at particular moments. So I think about when Rosa Parks dies in October of 2005, she becomes the first woman, the first civilian, to lie in honor in the nation's capital. But I think we cannot separate that from less than two month's earlier — Hurricane Katrina — there's growing public outrage about the kind of racial and social injustices that were laid bare during the storm, and federal inaction.

On the beautiful part of Beautiful and Terrible

Elizabeth Baker and Natalie Winston produced and edited this interview for broadcast. Sydnee Monday and Petra Mayer adapted it for the Web.