Accessibility links
In 'The Afterlives,' Holograms And Ghosts Give Meaning To Life After Death In Thomas Pierce's novel, a loan officer dies — but only temporarily, and uneventfully. "[He's] looking for some kind of bedrock in a world that does feel so full of mirage," Pierce says. 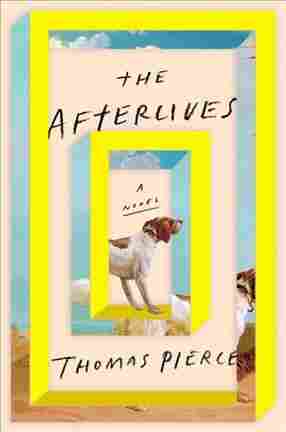 How do you live after you've died? That's the weighty question behind The Afterlives, a new novel by Thomas Pierce, a former producer at NPR who has become an award-winning author.

"[He's] a bank loan officer in a small mountain town in the Carolinas," Pierce says. "He dies due to a heart condition, very briefly. But he sees nothing. No lights, or tunnels, or angels, or anything that might ease his fears of what comes next. So he's back, and now he has to move forward with his life and try to make sense of this thing that's happened to him."

I mean, I've always had this sort of mystical streak in me, and I'm a person who's very comfortable with mystery in a certain sense. But then a couple — I was actually writing a very different book four years ago, and then my wife and I had our first child. And I've always, at least intellectually, understood that there is an end to this. We all have an expiration date, but I really began to feel that more acutely for the first time. And there's such a big difference between feeling something and just thinking it.

Little babies and children — they're like, they're these little clocks. You feel time's passage in a way that maybe you hadn't before. And so I went a little deeper in it starting 15 years back. My wife, her great grandfather is a fairly famous clairvoyant from the early part of the 20th century. Her folks have this great library of books related to him but also to all topics, you know — psychic phenomenon, afterlife, and past lives and the spirit world. And I've just loved deep-diving into those books over the last 15 years, and I think it was only a matter of time before I started writing about them a little more explicitly.

On Jim, the protagonist, discovering a ghost story in the midst of his existential questioning

He's on this stairwell in this restaurant ... and he hears this voice. And a lot of the book is trying to figure out, "What is this voice and if there can be such a thing as a ghost, then doesn't that maybe suggest that there is something more?" So it really, for him, is this new avenue to explore, to find some ounce of proof that maybe this is not the end.

On holograms and the purpose they serve in the book

Well, you know, Jim is this person who is looking for some kind of bedrock in a world that does feel so full of mirage and spectacle, and I find that to be true in this, our universe, and the holograms are really just a blown-up version of that.

What can we trust in? What should we put our faith in? What is real and not real? I mean, the holograms are a daily — a constant — reminder of that for him. He goes down the street, and this is a world in which you're walking down the street and maybe you don't know who's flesh and blood. I hope that this holographic future is not the one, but it certainly could be and I feel like it would be very isolating.

I mean, when you read about physics, things get pretty wacky at the outer fringes of physics and almost take on a certain quasi-mystical aspect to it. I am somewhere in the middle. Throughout time, humans have just tried to explain to themselves what it means to be alive and find some meaning in that. And the terms we use to find that have changed. Today, we have this kind of split: We see it as a split between science and religion. But I think there's a great deal of overlap.

Phil Harrell and Dave Blanchard produced and edited this story for broadcast. Sydnee Monday and Patrick Jarenwattananon adapted it for the Web.