Accessibility links
'This Is What Happened' And 'Babylon Berlin' Deliver Thrills And Intrigue Aplenty Critic John Powers says Mick Herron's latest novel sucks you in from the opening page, and a Netflix series imported from Germany is both fun and binge-able. 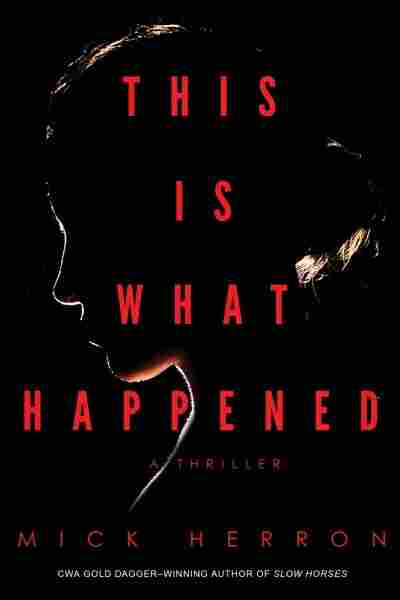 This Is What Happened

Title
This Is What Happened
Author
Mick Herron

If you're a fan of thrillers, you know that they're defined by two extremes. At one end are the plot-driven worlds that work like clockwork machines (for instance, Murder on the Orient Express); at the other are the stories that sprawl outward to offer a portrait of the larger society (like James Ellroy's Los Angeles or Stieg Larsson's Sweden). As it turns out, I've recently come across an enjoyable example of each extreme.

This Is What Happened is the latest book by British writer Mick Herron, whose ongoing Slough House series — about a branch of British intelligence stocked with disgraced and incompetent agents — is the sharpest spy fiction since John Le Carré.

Herron's new novel stands apart from that series, but like all his work, it sucks you in from the opening page. There we meet Maggie Barnes, a 26-year-old country lass who's moved to London only to find herself stuck in a drab office job and enduring a crushing loneliness.

Maggie is burning for something to give her life some meaning, some pizzazz. It comes when she meets Harvey Wells. This slightly fishy chap recruits her for a secret MI5 mission designed to thwart a Chinese plot against the British economy.

Harvey's plan has Maggie sneaking into an office in the building where she works and installing an eavesdropping app on a computer. Of course, if anything goes wrong, there's no guarantee he can save her.

Naturally, things go wrong. I won't say how, but I will add that Harvey, like any proper spook, is not what he seems. For starters, he gets entangled with a second woman, Sue, who has a hidden agenda of her own.

Before we know it, what looks at first like your basic spy thriller morphs into something far different — a tricky game of three-character monte filled with sly twists that Herron reveals with the precision of a high-end Swiss watchmaker.

Now, not all of these twists are, strictly speaking, realistic. But who cares? To crib a line from Hitchcock, This Is What Happened is less a slice of life than a slice of cake.

In contrast, life comes flooding in from all directions in Babylon Berlin, the most expensive German TV series ever, which has become an international hit. Based on a series of novels by Volker Kutscher, this over-stuffed 16-parter began streaming on Netflix at the end of January, and though not as searingly great as Rainer Werner Fassbinder's 1980 miniseries Berlin Alexanderplatz, it's far more fun and binge-able.

The scene is 1929 Berlin, near the end of the vibrant, violent Weimar era that will soon curdle into the horrors of Nazism. The hero, Gereon Rath, is an upright but tormented vice cop recently transferred to Berlin from Cologne.

Rath is trying to track down a pornography ring that has compromising photos of Cologne's mayor. While this sounds straightforward enough, he's soon confronted with political corruption and a freight train filled with mysterious cargo.

All this gets him enmeshed with other major characters. There's the lovely Lotte, an intrepid lady of the evening who hopes to become a homicide cop. There's the cross-dressing nightclub singer Svetlana, who's either a Stalinist agent or a Trotskyite spy trying to take Stalin down. And then there's my favorite, Gereon's partner, Bruno, a beefy, suspicious, old-school cop who's deeper than he seems. I keep hoping that he isn't a closet Hitler fan.

These four are just the beginning. Every episode teems with the many faces of the city — silky Armenian gangsters, anti-Semitic industrialists, right-wing generals, murderous Soviet thugs and, oh yes, a lot of ordinary people, including struggling musicians, shell-shocked World War I veterans, communist workers, love-starved widows and single young women trying to make ends meet without sinking into vice.

Babylon Berlin tells a very good story, yet it's even better at conjuring a rich and fascinating world. Bursting with period detail, the show captures the tainted glamour of Weimar Germany, from the art deco splendors of the lavish Moka Efti nightclub to a glorious recreation of Berlin's fabled Alexanderplatz.

It also makes you feel the insomniac desperation of individuals caught in a tumultuous society where, just to survive, everyone winds up being compromised in one way or another. Which is why the show spends so much time at divinely decadent night spots whose patrons drink and dance as if their lives depended on it. For these Berliners, life isn't a cabaret, old chum; it's a runaway train racing toward the darkest madness of the 20th century.

Read an excerpt of This Is What Happened