Accessibility links
Meditating On The Healing Power Of Alice Coltrane's 'Journey In Satchidananda' Almost 50 years after its release, the album remains a vision of universal healing, spiritual self-preservation in times of trouble and the god that appears when you seek her out.

Meditating On The Healing Power Of Alice Coltrane's 'Journey In Satchidananda'

Meditating On The Healing Power Of Alice Coltrane's 'Journey In Satchidananda' 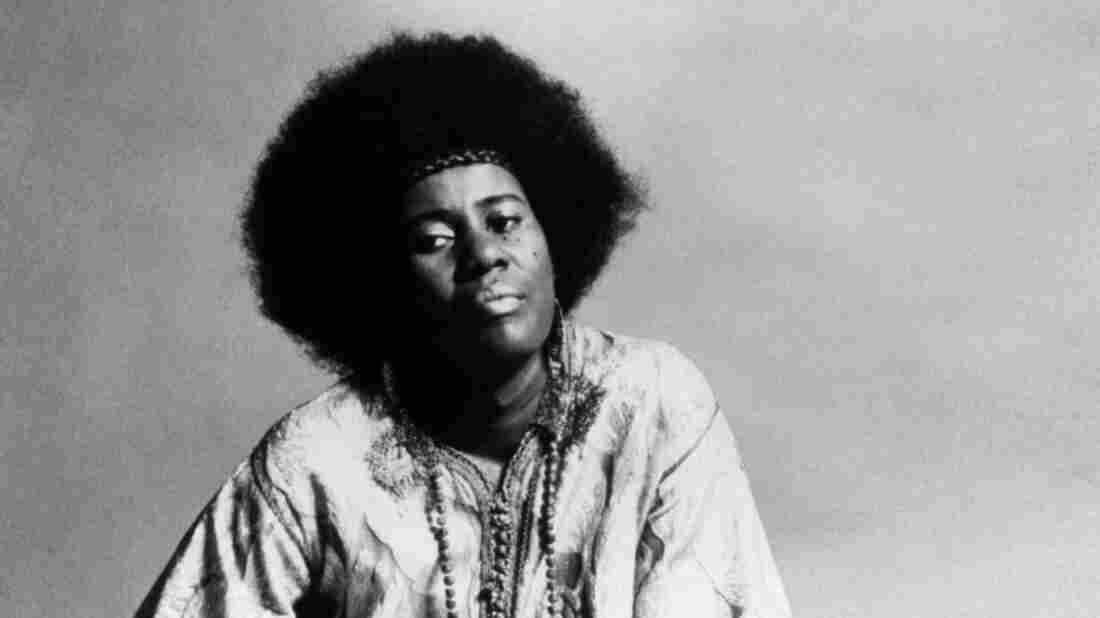 Musician and spiritual leader Alice Coltrane Turiyasangitananda released Journey In Satchidananda, the album that would become synonymous with her sound, in 1971. Echoes/Redferns hide caption 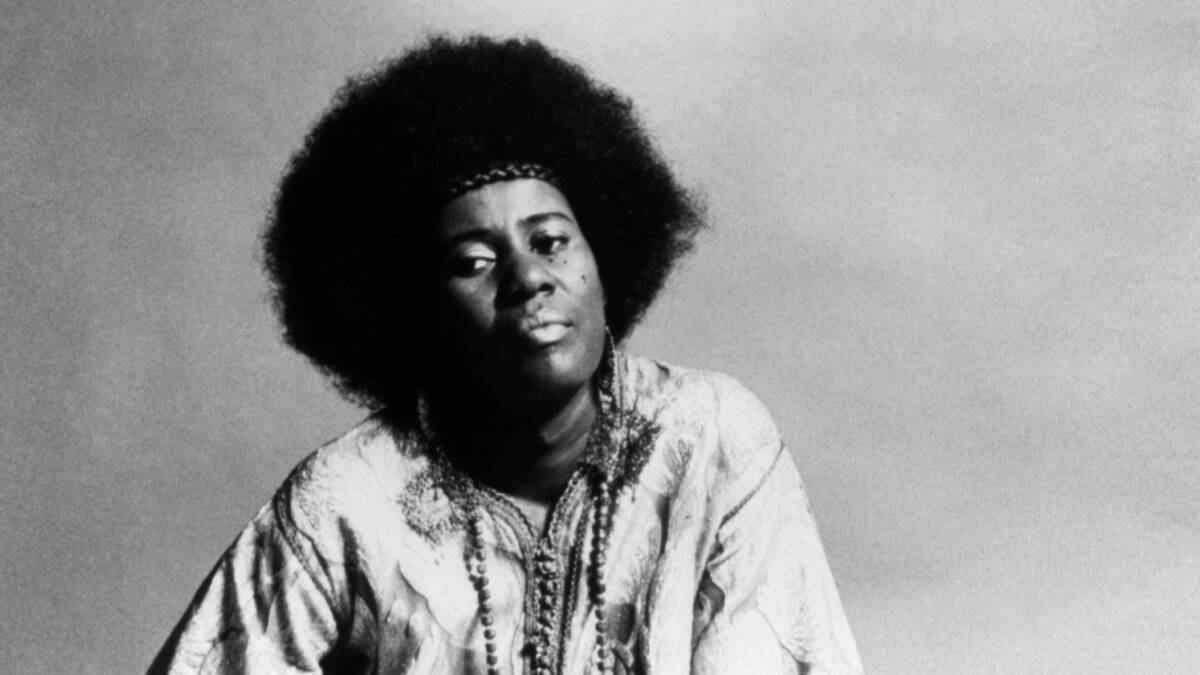 Musician and spiritual leader Alice Coltrane Turiyasangitananda released Journey In Satchidananda, the album that would become synonymous with her sound, in 1971.

I was searching when I first heard Alice Coltrane's music. The summer of 2016 was sticky and humid; the air was swollen with loss. Within a two-day period in early July, Alton Sterling and Philando Castile were shot and killed by police in Louisiana and Minnesota. Castile's fiance, Diamond Reynolds, live-streamed the traffic stop for a broken tail-light gone awry, the barrel of the officer's gun still pointed inside the car as Castile bled out. Reynolds' 4-year-old daughter watched from the back seat. Within a week, news broke of a gunman in Dallas killing 5 police officers, the deadliest attack for law enforcement in the U.S. since Sept. 11th. But news of yet another killing by police seemed to break every day.

It had been relentless since Michael Brown in 2014, and a visceral kind of hopelessness had drifted in like fog as the names and the cities piled one on top of the other. So when an acquaintance recommended meditation, I was annoyed. I'd tried before and failed: The opaque sheet of news static rolled around in my head as I tried to sit silently with "soothing music," accented with sounds of waterfalls or the occasional bird chirp. But after this particularly exhausting summer, I discovered Alice Coltrane's Journey In Satchidananda and decided to try meditation again.

The album was recorded 47 years ago on the heels of another turbulent time. Assassinations dotted the decade as the Vietnam War raged; people protested in the streets with a fervent sense of anger and loss. And then, Alice Coltrane's own intimate universe shifted. In the midst of all the collective turmoil, her husband, John Coltrane, died of liver cancer in July of 1967. To the jazz community, his children and Alice, a giant had fallen, leaving a sizable silence.

At 29, Alice Coltrane was a widow with four children under the age of 10. In an interview with Ebony magazine just 4 months after John died, she said "All my life I have to live without him, though I know it is his invisible hand that brought me through."

John and Alice had been husband and wife, mother and father, musical partners journeying together towards spiritual enlightenment. She referred to the first two years after John's death as a kind of deeply painstaking spiritual purification. In her memoir, Monument Eternal, she recounts sleepless nights and long meditations. Her weight rapidly dropped from 128 to 95 pounds.

This time also marked the beginning of Alice Coltrane as a bandleader. She released her first three albums: A Monastic Trio (1968), Huntington Ashram Monastery (1969), and Ptah, The El Daoud (1970). The harp, an instrument she played on all three albums and that she would become known for, was bought by John before his death. By the time it arrived, he was gone. Her daughter, Sita Michelle Coltrane, remembers the home re-animating with music in the early mornings.

"I once remember lying in my bed waiting to go to school, and I woke up to this beautiful harp music just filling the house," she says. "And I thought 'Wow, if heaven is like this, then I'll be certainly ready to welcome it when I get my chance.'"

In 1969, Coltrane reconnected with bassist Vishnu Wood, a musician she'd met in Detroit, her hometown. Wood suggested she meet his guru, Swami Satchidananda, who had given the opening speech at Woodstock and founded The Integral Yoga Institute in New York. At the end of a bloody decade, everyone, including artists and musicians, was searching for some kind of peace.

The war dragged on, and in May 1970, the Kent State shootings shocked the nation. By November, Coltrane was recording Journey In Satchidananda, the album that would become synonymous with her sound. Coltrane added two new instruments she'd never used before: the North African oud played by Wood and the Indian tamboura played by Tulsi Reynolds, who she'd met at Satchidananda's Integral Yoga Institute. The teachings, Reynolds says, laid a framework for the music: "What we were trying to do was find a common ground that was beyond any one individual thinking."

Released in 1971, the same year as Marvin Gaye's What's Going On, the album ushered in a new decade — one with much of the same volatility. It was a year that saw the beginning of the digital age, the birth of Greenpeace and the release of The Pentagon Papers.

"There [was] a lot of uncertainty," says Tammy L. Kernodle, musicology professor at Miami University, in describing the atmosphere of the era. "I think [Coltrane]'s music offers a sense of hope and transcendence in the midst of all of this uneasiness."

Coltrane's liner notes suggest that this project aimed to rise above the fray, or maybe appeal to the well-being of those who had gotten so entangled in it that their spirits were shaken.

"Anyone listening to this selection should try to envision himself floating on an ocean of [Satchidananda's] love, which is literally carrying countless devotees across the vicissitudes and stormy blasts of life to the other shore," Coltrane wrote. "Satchidananda means knowledge, existence, bliss."

The title track unfolds, as pianist and music professor Courtney Bryan says, "like a flower," with the tamboura providing the space for Cecil McBee's unforgettable bassline. But "when she brings in that harp gliss[ando]," Bryan says, "it's just like a door opens."

Waiting there behind it is Pharaoh Sanders' soprano saxophone, ready to narrate. Coltrane's arpeggios flutter like the flute of a bhajan. Blending music rooted in the African American tradition with Eastern influences, Coltrane's exploratory modal jazz becomes accessible healing music across cultures.

Harpist Brandee Younger says the genre blending was radical. "It takes you into this other space. And yet it's still not foreign to a listener that's used to hearing gospel or the blues. It's a comfortable space — it's free but still familiar."

Five years after Journey In Satchidananda, Coltrane continued her healing practice formally, taking the name Turiyasangitananda (the transcendental lord's highest song of bliss) and moving her family to California to build The Vedantic Center. It was an ashram that provided spiritual sanctuary for students of all faiths, surrounded by mountains in the middle of 48 acres. Longtime student and assistant, Shankari Adams, remembers the center's white mandir cutting an outline against blue sky. Those who knew Turiyasangitananda say her presence was always felt: She dressed in orange, communicated through butterflies as well as sound and showed people God within themselves.

"I am not the same person now that I was before meeting her," Adams says, "l have an entirely different outlook of myself, of who God is, of where God is."

After I first listened to the album, I sat with legs crossed, the late summer sun shining in on my face from an open window. At that point, I knew little about Alice Coltrane and nothing about the lives she affected or the lessons she taught. But it was in the music. Like air, Coltrane Turiyasangitananda showed, God, by whichever name, was everywhere.

Journey In Satchidananda illustrated for me that the ways in which to heal are also boundless, to pull and study from whatever's available to keep my spiritual self intact. What's most poignant for me is that she doesn't abandon the blues, the familiar reference point for that pain. And it anchored me while I meditated — if only briefly — outside of it. While musically signifying that I was part of a lineage of women who'd walked through the fire, my reality wasn't undermined by the thought of escapism — the trickling spring or babbling brook or exotic bird call. That fire simmered within the sound, allowing me to engage with it on my own terms. The music provided the space for me to do so perhaps because of Turiyasangitananda's own intention to heal.

"I think that [hers] was a selfless healing," Younger says. "Healing for [herself] as a person, as a woman, as a mother, as a musician; being centered and not heavily influenced by external factors, industry standards, social standards — all that."

For six months, I meditated every day to that album, through an exhausting election, as the summer humidity turned to winter rain, and I entered a new year more ready than I ever had been, aware that it would undoubtedly bring more of the same challenges. Almost 50 years after Journey In Satchidananda was released, the album remains a vision of universal healing, spiritual self-preservation in times of trouble and the god that appears when you seek her out.