Accessibility links
2-In-3 Support Legal Status for DREAMers; Majority Oppose Trump's Wall: NPR Poll Americans are not sold on President Trump's immigration deal that calls for billions for a border wall. That's one finding of an NPR/Ipsos poll that shows Americans sharply divided on immigration. 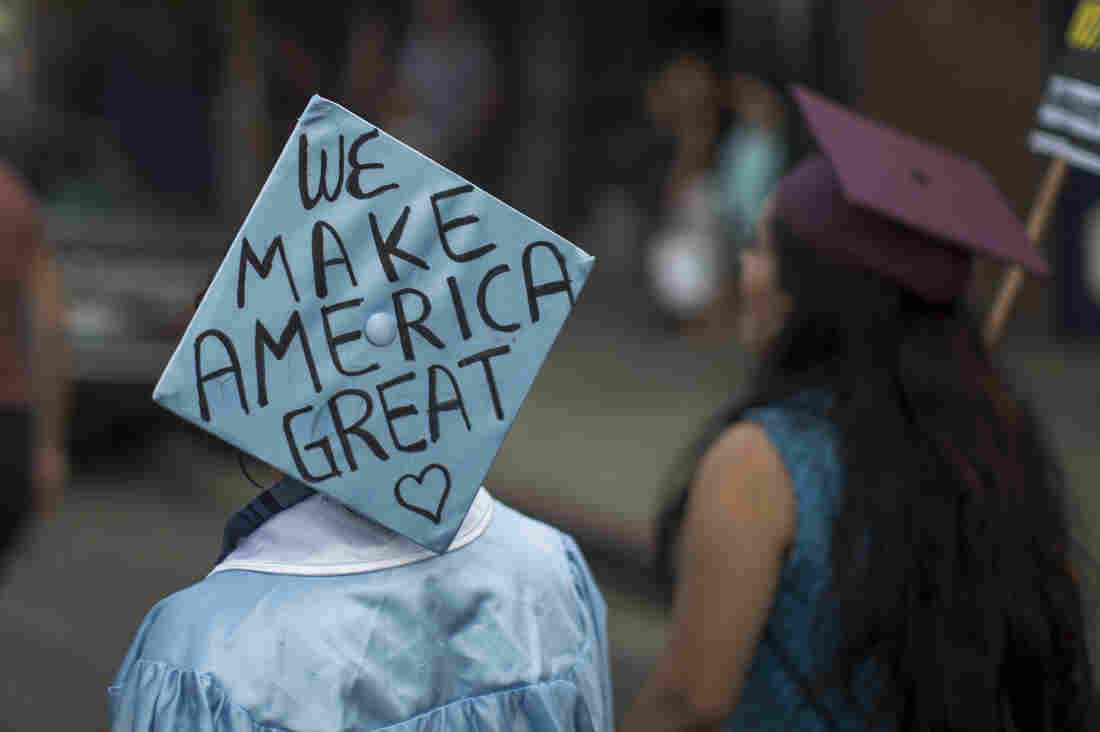 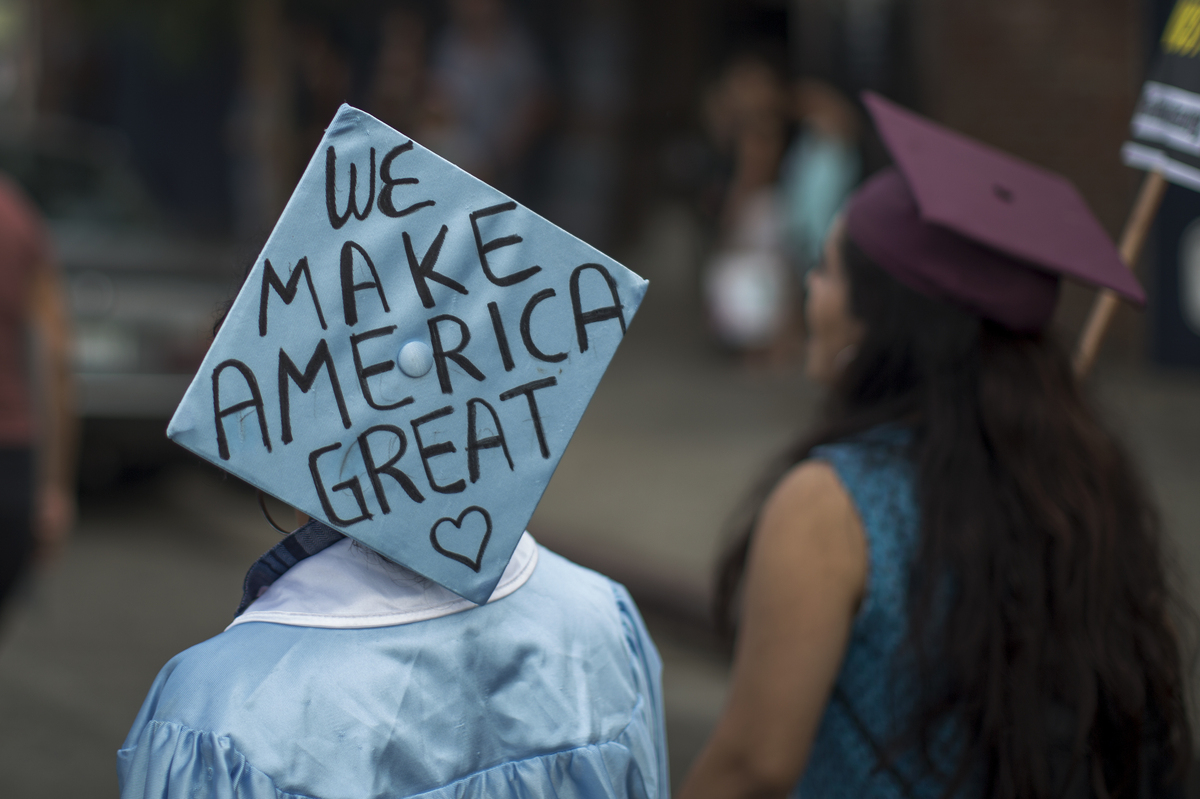 Thousands of immigrants and supporters join the Defend DACA March in Los Angeles in September to oppose the President Trump's ordered end to DACA protections.

Two-thirds of Americans say people brought to the United States as children and now residing in the country illegally should be granted legal status — and a majority are against building a wall along the border with Mexico, according to a new NPR/Ipsos poll.

Partisan dividing lines were sharp, the survey found, and clearly run throughout the immigration debate, reflecting in everything from policy solutions to attitudes toward immigrants, whether it was if they take jobs from American citizens, commit more crime or if the U.S. has a moral obligation to take in people from all backgrounds, including from less-economically stable countries.

"Since Trump has taken over the GOP, [immigration] has become the fault line — even more than other social issues," said Chris Jackson, vice president for Ipsos and director of the public polling team. "It's the main dividing line between the two parties now."

That divide also showed up in Americans' knowledge of immigration issues. Take our quiz, and see how you stack up — and what others picked:

DREAMers, the wall and what do with families

Sixty-five percent of Americans said they favor giving legal status to DREAMers, as a deadline set by President Trump quickly approaches for when temporary status will run out for hundreds of thousands of DACA recipients. That includes 81 percent of Democrats, 51 percent of Republicans and 66 percent of independents. (DACA, or Deferred Actions for Childhood Arrivals, is the executive order signed by former President Obama and rescinded by President Trump.) 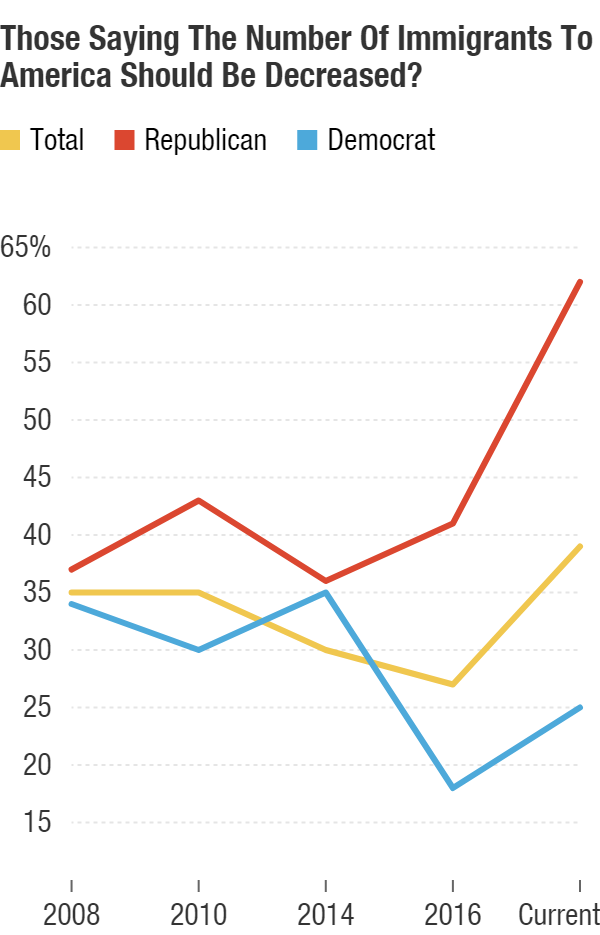 Republicans have become far more favorable of decreasing immigration since Trump has come onto the political scene. Domenico Montanaro/Ipsos poll/trend data provided by General Social Survey, conducted by NORC, or the National Opinion Research Center, at the University of Chicago hide caption

One of the elements on the table that Trump wants included in order to grant citizenship to DREAMers is to allocate billions of dollars to build a wall — and fulfill a principal campaign promise. But by a 56-to-38 percent margin, Americans said they oppose a wall, and 60 percent said it "wastes taxpayer money."

The split on support for the wall also happens to mirror Trump's approval rating in many polls, and unsurprisingly, there's Trump's base and everyone else — 68 percent of Republicans want the wall built, while fewer than one-in-five Democrats and one-in-three independents say so.

Trump, congressional Republicans and Democrats have not been able to agree before the March 5 deadline on a deal to protect DACA recipients and the wider universe of DREAMers. The government shut down briefly when Democrats last month would not agree to a short-term spending deal that did not address DACA. Trump has taken to Twitter to accuse Democrats of not wanting a deal:

Any deal on DACA that does not include STRONG border security and the desperately needed WALL is a total waste of time. March 5th is rapidly approaching and the Dems seem not to care about DACA. Make a deal!

Trump turned down a bipartisan Senate proposal on DACA, and he put forward one of his own that Democrats have chafed at. In addition to a wall, Trump also wants to end the diversity visa lottery program and limit the ability of those immigrants living in the U.S. to be able to bring in extended family members (what pro-immigration advocates call family reunification and what conservatives call "chain migration.")

Trump's plan would no longer allow parents of a U.S. citizen to be granted permanent legal status in the United States. Current U.S. law allows spouses, minor children, parents, siblings and their minor children to join them. (Grandparents, aunts, uncles and cousins are already barred.)

Americans were split on whether to end allowing immigrants to bring their extended families into the U.S. — 46 percent opposed ending the practice, while 45 percent supported ending it. But Americans are sharply divided by party on the question — 63 percent of Democrats oppose it; 64 percent of Republicans are in favor. Independents narrowly side with Republicans on this, 49 to 40 percent.

The poll found broad support, however, for continuing to allow close nuclear families to be granted legal status, especially spouses (87 percent) and minor children (84 percent). Two-thirds, however, also believe parents should be allowed, including 62 percent of Republicans.

Siblings, grandparents and adult children of those immigrants, however, face a less-welcoming American public. Solid majorities of Democrats say all of them are welcome, but Republicans and independents less so. And no group is in favor of granting legal status to cousins or aunts and uncles.

An immigration split emerges in the Trump era

The number of Americans saying they want immigration decreased has risen to its highest levels in at least a decade.

The poll found that roughly 4-in-10 Americans feel that way. That is driven by Republicans — 62 percent of whom say the number of immigrants to America should be decreased. That's a 21-points increase for Republicans from 2016 and 26 points higher than in 2015. (The same question was asked in the General Social Survey conducted by NORC, or the National Opinion Research Center, at the University of Chicago.)

Democrats and Republicans didn't used to be so far apart on this question, actually. At the start of Obama's presidency, their numbers were indistinguishable from each other. During the 2016 campaign and into the Trump presidency, a massive gap has opened up.

Other findings of note

The poll was conducted from Jan. 31-Feb. 1 with a survey sample of 1,004 adults across the country, chosen randomly from Ipsos's online panel. They were interviewed in English, and the sample includes 370 Democrats, 309 Republicans and 216 independents.