Accessibility links
Low-Wage Workers Say #MeToo Movement Is A Chance For Change The movement has galvanized workers in low-wage industries to shine a light on sexual harassment and assault. Advocates are pushing for changes including higher wages and better reporting tools. 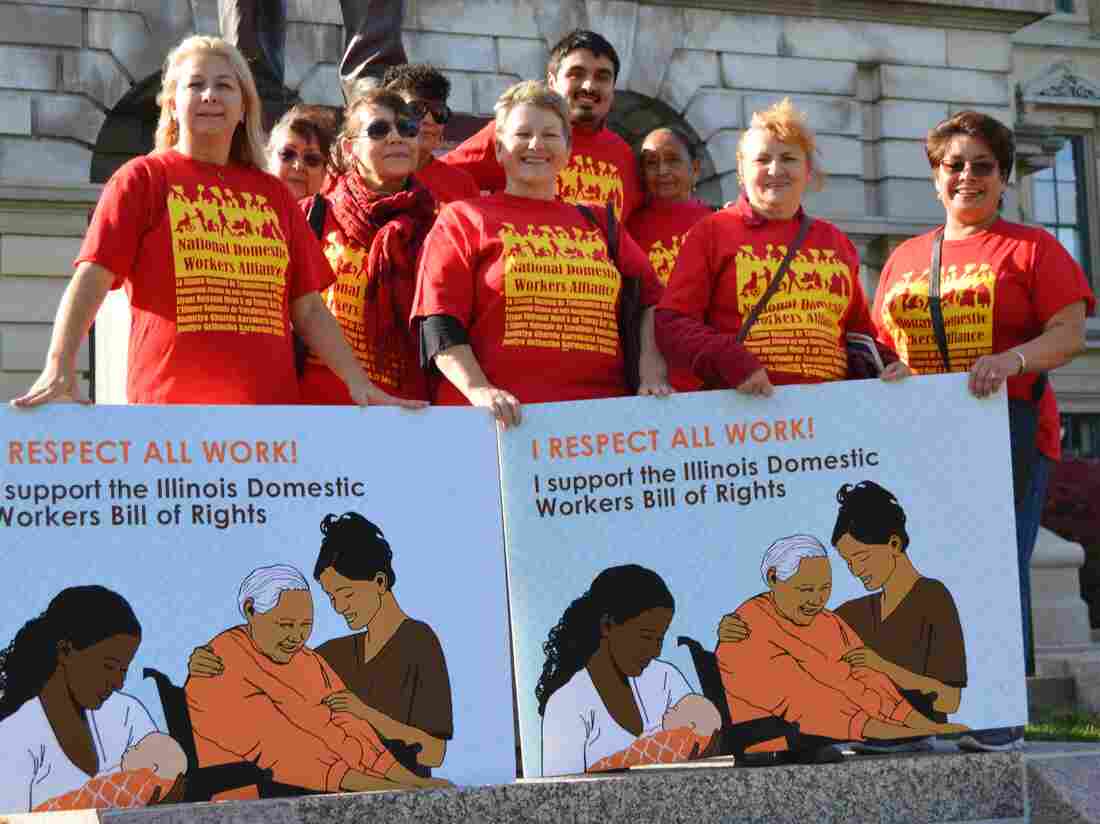 Isabel Escobar (far right) was among a group of Arise Chicago members — Latina and Polish home cleaners, nannies and home care workers — advocating for the Illinois Domestic Workers Bill of Rights during an October 2015 trip to the state capital in Springfield. Arise Chicago hide caption 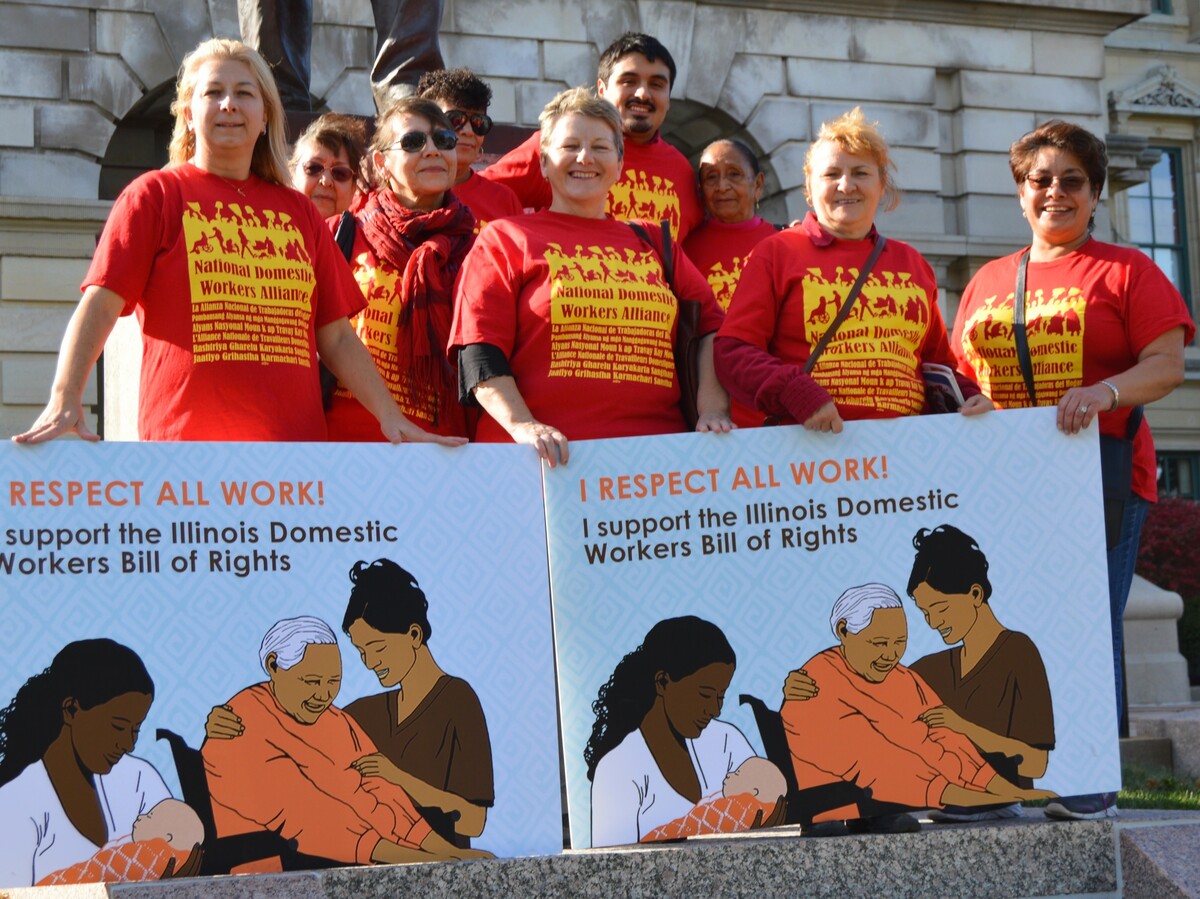 Isabel Escobar (far right) was among a group of Arise Chicago members — Latina and Polish home cleaners, nannies and home care workers — advocating for the Illinois Domestic Workers Bill of Rights during an October 2015 trip to the state capital in Springfield.

The campaign to speak out against workplace sexual harassment began with women in Hollywood and in the media — those in positions of relative power and privilege.

Now, women in retail, agriculture and domestic work — where harassment rates run very high — say they, too, are starting to feel the impact of the #MeToo movement.

"It's had an incredibly dramatic impact in our industry," says Saru Jayaraman, president of the Restaurant Opportunities Centers United, a group that advocates for better working conditions. Policymakers are now considering proposals that her group has been pushing for years, she says.

It has also made a difference for people like Isabel Escobar. She recalls climbing the stairs with cleaning supplies at a client's home in Chicago 15 years ago. The owner's adult son stood waiting for her at the top of the stairs, naked. She fled.

"That was etched in my person," she says. "It cannot be erased — the fear, the distrust and my lack of confidence."

Escobar, now 59, says she had to endure the fear and several other sexual harassment incidents while trying to escape domestic violence at home. After she confronted one client, Escobar — a legal Guatemalan immigrant — says he threatened to report her to immigration.

She says the #MeToo campaign has changed the dynamic for her and for the domestic workers she now helps to organize.

"It's not that this is behind closed doors and that's where it ends. No," Escobar says. "The door is wide open and I want everything to come out. I want women to feel stronger and free to denounce this wrong."

That sentiment is echoing among women across industries, including with Valerie Biega, a 25-year-old sous chef who lives in Toronto but has worked across the U.S.

"The vibe is definitely that this is our shot to make a change — like a lasting change," Biega says. She says she has become accustomed to getting comments about her backside when she bends over or every time she is alone in a walk-in cooler.

"It's at the point where it's happened so much that I instinctively shoot up as soon as I hear a walk-in door open behind me," she says.

Biega says she has developed coping mechanisms — like a stone-faced response — and says she is sharing these tips with other female kitchen workers online.

Moriah Montalvo, who works near Cleveland as a concession stand cashier, says she and her mother both faced sexual harassment in restaurant jobs. Montalvo spoke up where her mother felt she couldn't, but with the #MeToo movement, the daughter wants to see more than just talk.

"Social movements are awesome, and they need to happen," Montalvo says. "It's not about just speaking out; it's about something else has to come behind it and sustain it."

Indeed, there are those who believe lasting change is elusive.

For the past decade, 25-year-old Lita Farquhar has waitressed in New Orleans, home of chef John Besh, who faces numerous allegations of sexual harassment.

"I mean, he just got to retire early; there weren't really any consequences for him," she says. 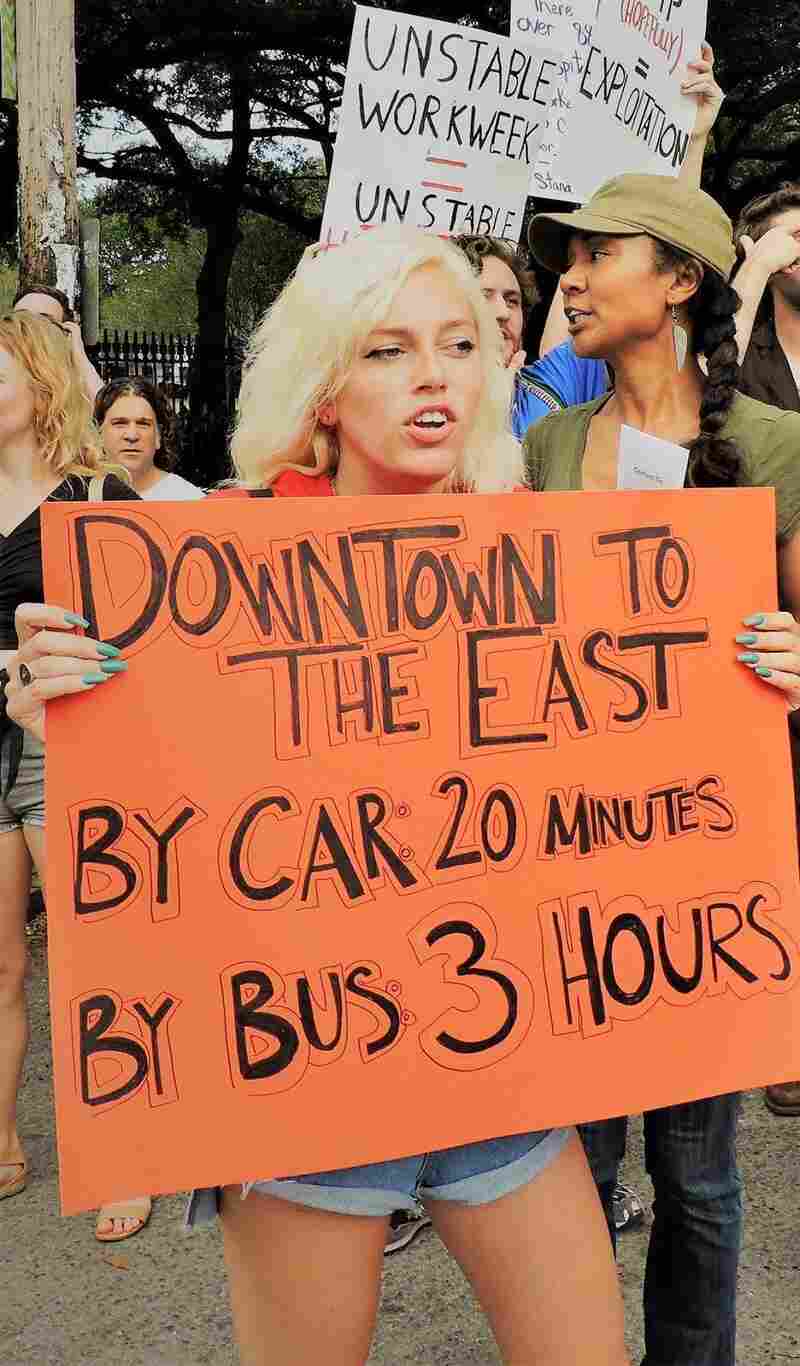 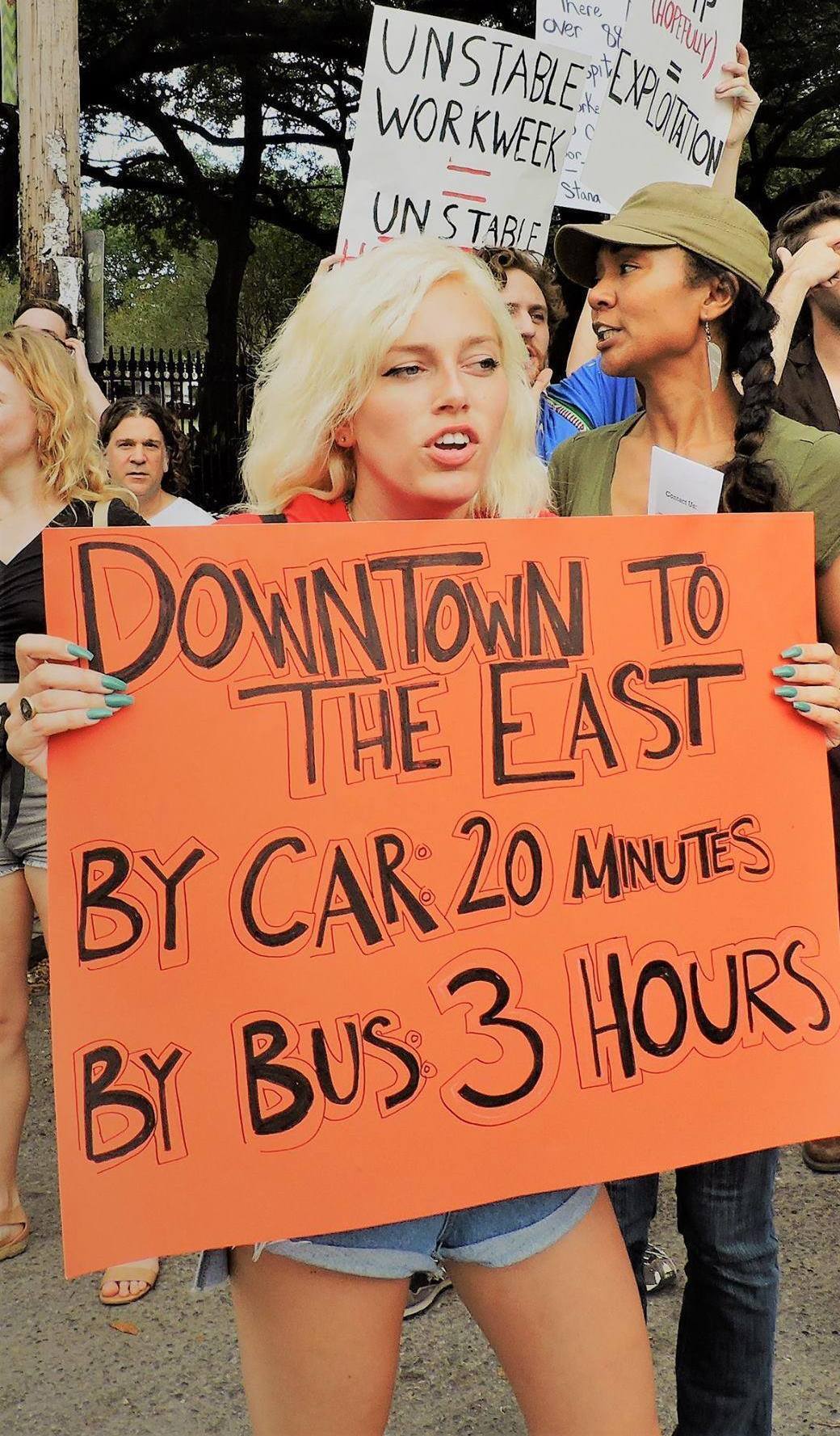 Lita Farquhar participates in a rally by hospitality workers in New Orleans' French Quarter who were protesting for better public transportation. Farquhar, a waitress, says managers can retaliate against workers by assigning bad shifts or less-desirable work.

Farquhar says managers can retaliate by assigning bad shifts or less-desirable work. It's not easy to defy a culture where the customer is always supposed to be right, she says.

"It's really hard when a customer sexually harasses you, because as a server, I make $2.13 an hour and I really rely on tips," Farquhar says.

That is the crux of the restaurant industry's problem, says the Restaurant Opportunities Centers United's Jayaraman.

A majority of states allow restaurants to pay waitstaff less than minimum wage, and her group found that sexual harassment rates were double in states where subminimum wages exist.

"Seventy percent of these workers who live on the tipped minimum wage are women, and they suffer from three times the poverty rate and the highest rates of sexual harassment of any industry, because they must put up with all kinds of inappropriate customer behavior," Jayaraman says.

Worker advocates say policy changes could help in many sectors, not just restaurants. One is to eliminate fine-print employment contracts that require workers to arbitrate workplace claims in private.

"We can't just say we're going to address this problem in one industry and then forget about all the others that have been impacted," says Monica Ramirez, president of Alianza Nacional de Campesinas, a group representing female farmworkers.

Many women in low-wage jobs work in physical isolation, may not speak English and have been stuck in forgotten corners of the economy. "Farmworker women have been left behind for many, many, many years," Ramirez says.

She says that because they often work alone or behind closed doors, farmworkers and domestic workers need policies to encourage and reward whistleblowers and bystanders who report problems.

"In the criminal justice realm, people are told that if they see something, they should say something" and something similar should exist for the workplace, Ramirez says.

Such a system might have helped Teresa Arredondo, 49, of Bakersfield, Calif., who has been picking grapes and pruning pistachio trees since she was 17. Now a foreman, Arredondo oversees a 50-woman crew.

Last April, after a supervisor tried to rape her in the fields, she ran away and kept silent until she overheard her attacker bragging about his other sexual exploits. Arredondo remembers him saying: "She knows that I have to be happy, because she knows that if I am happy, she has work."

She reported her attacker to the farm's owner, who fired her supervisor but also fired Arredondo and her entire crew. She apologized to her crew, who applauded her decision to speak out.

"I feel good because he doesn't get more girls," Arredondo says. "This is my compensation."