Accessibility links
Despite Progress, Cities Struggle With Ambitious Climate Goals Dozens of cities are vowing to cut their carbon emissions and uphold the U.S. commitment to the Paris climate deal. Despite progress, many are falling short of their most ambitious goals. 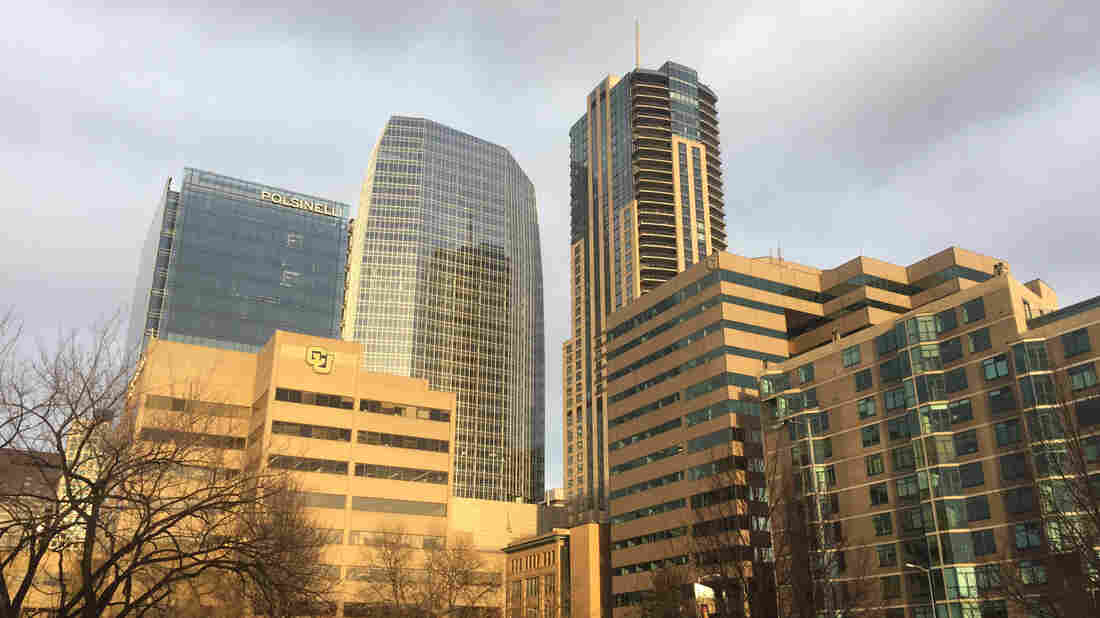 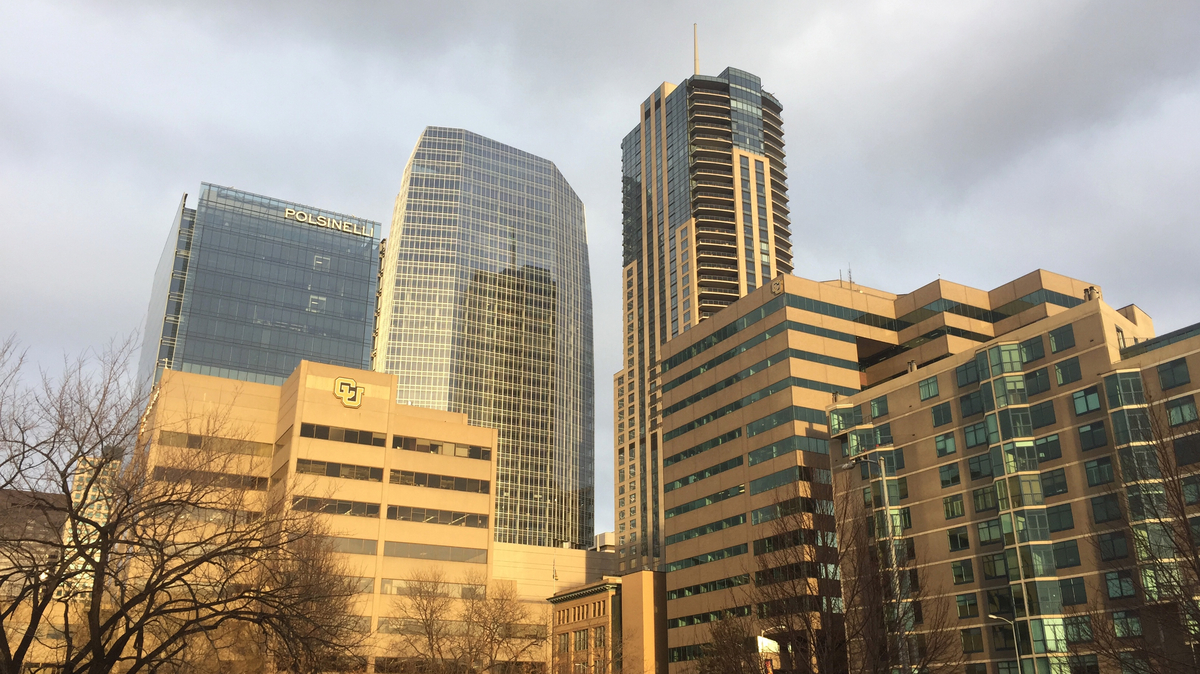 On the 40th floor of a new Denver skyscraper, overseeing workers in hard hats and orange vests, construction manager Michael Bjes touts some of the measures that will make this building energy efficient: Energy Star appliances, LED lights, "water efficient toilet fixtures throughout the entire building."

The requirements are aimed at meeting one of the most ambitious climate goals in the country. By mid-century, Denver aims to reduce its greenhouse gas emissions 80 percent below 2005 levels.

At the recent third annual Sustainable Denver Summit, the theme was "Growing Responsibly," and the city's chief sustainability officer, Jerry Tinianow, was upbeat. He'd just returned from United Nations climate talks in Germany, where a delegation of local and state U.S. officials vowed to uphold the country's commitment to the global Paris climate deal, even though President Trump has said the U.S. will leave it.

"We challenge each other," Tinianow said, "to sign pledges, to set goals."

Cities' climate efforts got a lot of attention after Trump's Paris announcement. Many of them have actually been working at reducing emissions for years. But measuring progress on all those goals can be tough, and critics say much more needs to be done to help avoid the worst impacts of climate change.

Dave Ribeiro is with the American Council for an Energy Efficient Economy, which puts out an annual City Energy Efficiency Scorecard. He credits cities for expanding public transportation, using cleaner fuels and pushing for renewable energy. But he says there are limits to calculating exactly how much such moves actually cut carbon emissions.

"The data quality is poor, it's incomplete and it's tracked over different time periods," Rebeiro said.

The data that does exist shows that despite progress, many cities are still falling short.

"A city will set very aggressive goals, it won't meet them, and then a few or five years later they just set new goals that are even more ambitious," says energy consultant Sam Brooks.

Brooks created a stir last year with an op-ed that claimed, "No, Cities Are Not Actually Leading on Climate. Enough with the Mindless Cheerleading."

He points out that some of the same cities working hardest on cutting emissions are also some of the fastest growing — incuding Denver, San Francisco and Washington, D.C. Per capita energy use may be dropping, but total energy use is still going up. That's a problem, since scientists say greater reductions will be needed, beyond the Paris agreement, to limit global warming to 2 degrees Celsius.

Brooks takes some of the blame for cities not doing more. A few years ago he ran the energy division for Washington, D.C.'s government buildings, when the city announced it had become powered by 100 percent renewable energy.

"We got great press," he says, "and the day after we did it, nothing changed."

He says that's because, like a lot of cities, D.C. took the easier path. Instead of driving down its own local carbon emissions, it paid to offset them with a slice of renewable energy generated elsewhere. Certainly better than nothing, he says, but "it had probably a modest impact, somewhere probably in Oklahoma, Texas or the Dakotas."

Brooks has since left that position, and had a harsh message when he testified before D.C.'s City Council last year.

"I think we have been at this too long," he said, "and this issue is too important for us to settle for feel-good anecdotes, or data that does not paint an accurate picture."

To be sure, some cities are making great strides. And some have more power than others to control local emissions. Standards for renewable energy, for example, are often set by states. Sixteen states, plus a long list of businesses, have also joined the pledge to bring down combined greenhouse gas emissions enough to meet the U.S. Paris goal, a 26-28 percent reduction by 2025. 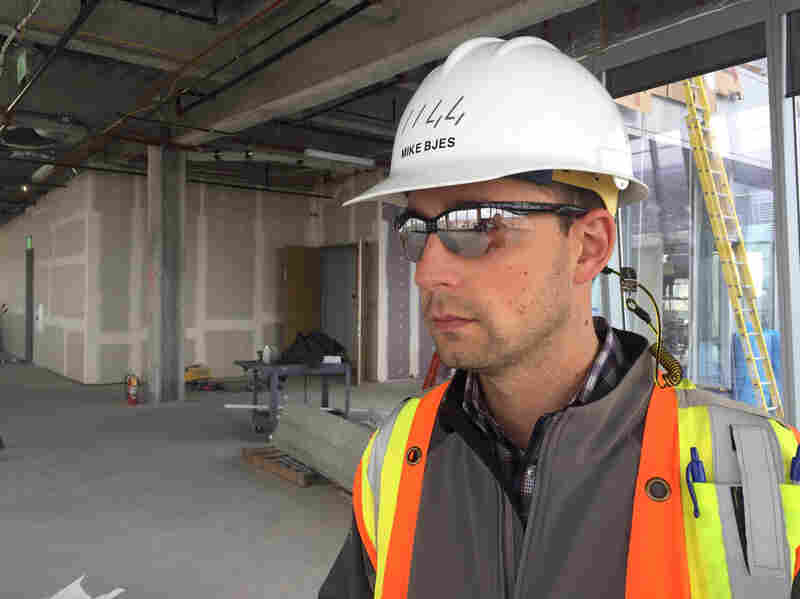 Construction manager Michael Bjes says this building's all-glass exterior has a protective coating, and an internal layer of argon gas, to reduce heat transfer and the use of air conditioning. Dan Boyce/Dan Boyce hide caption 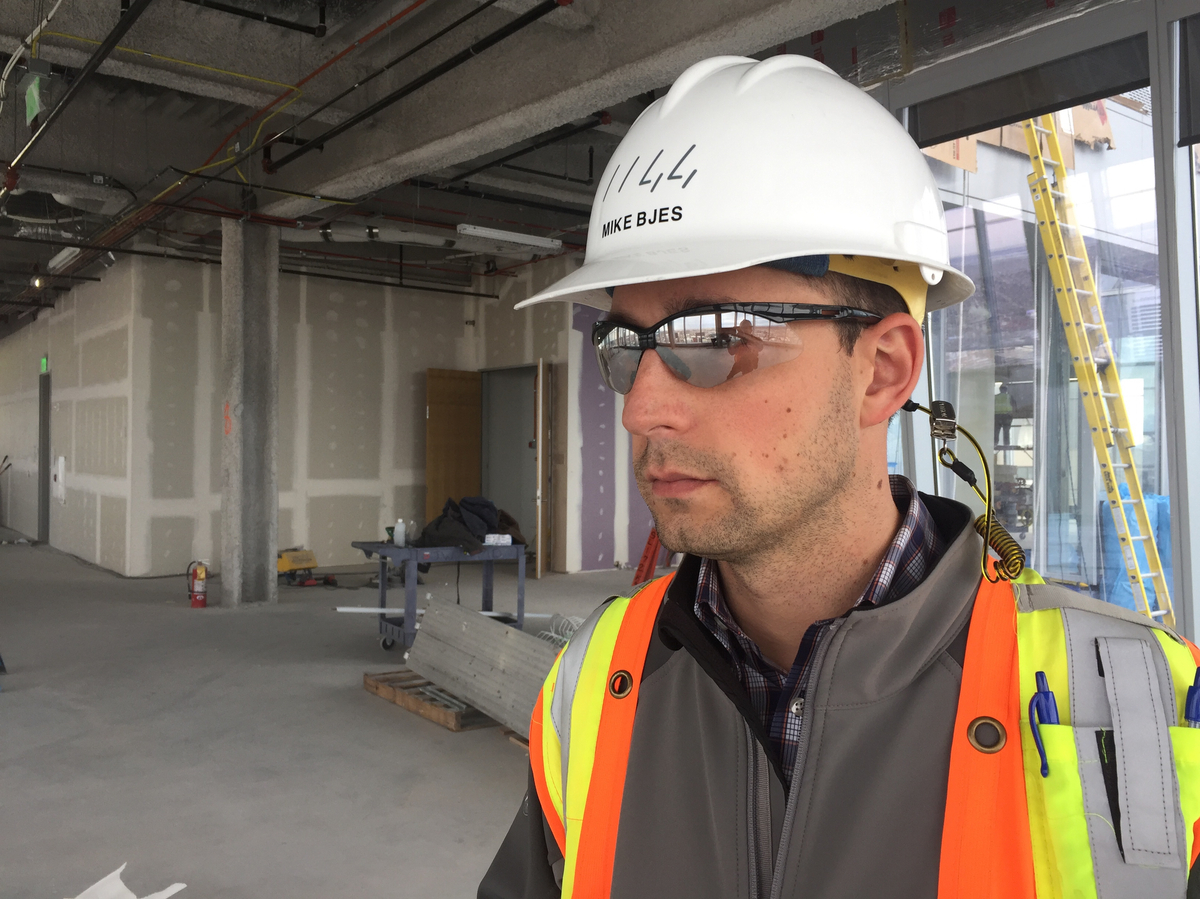 Construction manager Michael Bjes says this building's all-glass exterior has a protective coating, and an internal layer of argon gas, to reduce heat transfer and the use of air conditioning.

Simply calculating all that will be a challenge, one coordinated by former New York Mayor Michael Bloomberg and Bloomberg Philanthropies. Last year, the Rhodium Group found that some states were on track to bring down emissions in line with the Paris climate agreement, but without more federal action the U.S. as a whole would likely fall considerably short.

In places such as Denver, this is not for lack of trying. But Sam Brooks is frustrated that even some trends with the best of intentions can end up being counter-productive. One pet peeve: urban architects' increasing love of glass.

With the spread of LEDs, he says lighting isn't the energy suck it used to be. Now, glass covered buildings are taking in more heat from the sun, leading to the use of more air conditioning. "That very significantly increases the overall energy consumption of that building," he says.

Which brings us back to that new Denver skyscraper, where all 40 stories are entirely glass.

Construction manager Michael Bjes says the glass has a coating, and an internal layer of argon gas, to help prevent heat absorption. He admits other materials could save more energy, but says design is a balance.

"The experience for our tenants is really what we're after," he says. "We want to make sure it meets our tenants' needs."

Sure, he says, people want energy efficiency. But they also value aesthetics, like floor to ceiling views of Colorado's snow-capped Front Range mountains.