Accessibility links
In 'How To Stop Time,' Immortality, Sadness And Drinking With Shakespeare Matt Haig's new novel isn't exactly about time travel — it's about a slow-aging man who travels through time just by staying alive for centuries. And yes, he meets Shakespeare (who has bad breath). 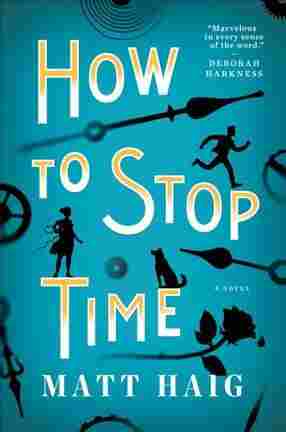 How to Stop Time

Here's what drives me crazy about time travel books. In (almost) every single one of them, the time traveler's most notable experience is meeting other people who aren't time travelers; who were, in their proper moment, just famous as all hell.

Hitler, Jesus, Shakespeare, the king of this or that. Sometimes this is the purpose of the time travel (Let's kill Hitler! being such a famous occupation of the chronologically gifted that it has spawned its own sub-genre of semi-historical fiction) and sometimes it's just a pleasant diversion, but it always seems to happen. It's like people who believe they can recall past lives: They always seem to have been Napoleon or Cleopatra. No one ever remembers the past life where they were the second-most-successful aluminum siding salesman in Columbus, Ohio.

In How To Stop Time, the new novel from Matt Haig, the main character, Tom Hazard (which, not for nothing, is a fantastic name for a time traveler — or anyone else) knew Shakespeare. Hung out with Shakespeare. Worked for him, playing the lute for his productions. Hazard met the Fitzgeralds (Zelda and F. Scott). He's been in rooms with Josephine Baker and Lillian Gish. And all of that might have been very annoying if he hadn't also been, well, not an aluminum siding salesman exactly, but just a regular guy. A bum. A piano player. A murderer. A history teacher. He has been many things in many times because, by the strictest of definitions, Hazard isn't really a time traveler either — he's just lived a very, very long time. Though he looks like a mild-mannered 41-year-old London teacher, he was actually born in 1581 with a rare genetic disorder that makes him age extraordinarily slowly.

"People like us die in only one of two ways," explains Agnes, another one of Hazard's kind — an Albatross (which is what the long-lived call themselves) in a world of Mayflies (which is what they call the rest of us). "We either die in our sleep aged around nine hundred and fifty, or we die in an act of violence that destroys our heart or brain or causes a profound loss of blood. That is it. We have immunity from so much human pain."

And that sounds wonderful, right? But Haig's story is one of loneliness and lack — a tragic romance between young Tom Hazard, alone in the world (his father dead in the wars, his mother killed for being a witch who'd gifted her child with immortality), and Rose, a fruit-seller in Elizabethan London. Of course it will end badly. Because Tom won't age. Tom won't get sick, ever. But Rose will.

How To Stop Time plays like a meditation on the tick and tock of time and mortality. On the preciousness of every moment and the nightmare of having both too few and too many. There's a conspiracy element thrown in to give the plot a little kick, but it's a minor secondary plot until the book's final third, and serves as an armature to keep the laggier parts of the narrative upright when they threaten to collapse into skirling discourses on piano playing, the topography of London or scenes set in the teacher's lounge — which are exactly as dull as you imagine they are.

'How To Stop Time' plays like a meditation on the tick and tock of time and mortality. On the preciousness of every moment and the nightmare of having both too few and too many.

But even those diversions are minor, and Tom Hazard serves as an excellent guide to the most recent 400-odd years of human history. Just active enough, just interesting enough, just fascinated enough by the large things (revolution) and the small (Gershwin). He is a plain and ordinary man to whom a special gift has been granted. There are things he's searching for but, really, he's just a man who has borne witness to more than his usual share.

How To Stop Time suffers when it grows heavy and lingers too long in any one time or place, but in the moments when Haig allows his narrator to flit from moment, recalling spans of decades as if they were a long weekend, then land somewhere for a few paragraphs to describe Paris or New York at instants when they mattered to Tom and his tale, the book can be remarkably beautiful, achingly sad and completely alien all at once. "It is strange how close the past is, even when you imagine it to be so far away" Tom says. "Strange how every object or word can house a ghost."

Because, really, this is a book about time more than it is about travel. And time is all about the moments, not the space between them. Haig has done a fine job of capturing a few beautiful ones like butterflies in a jar — instants of love or rage or heartbreak.

And one of them is even the night that Tom Hazard spent drinking ale with Shakespeare.