Accessibility links
Why #MeToo Happened In 2017 Why did the #MeToo movement take off recently and not decades ago? The story of a playwright who was publicly accused of sexual misconduct in the 1990s and again in 2017 offers some clues.

Why did the #MeToo movement take off recently and not decades ago? The story of a playwright who was publicly accused of sexual misconduct in the 1990s and again in 2017 offers some clues. 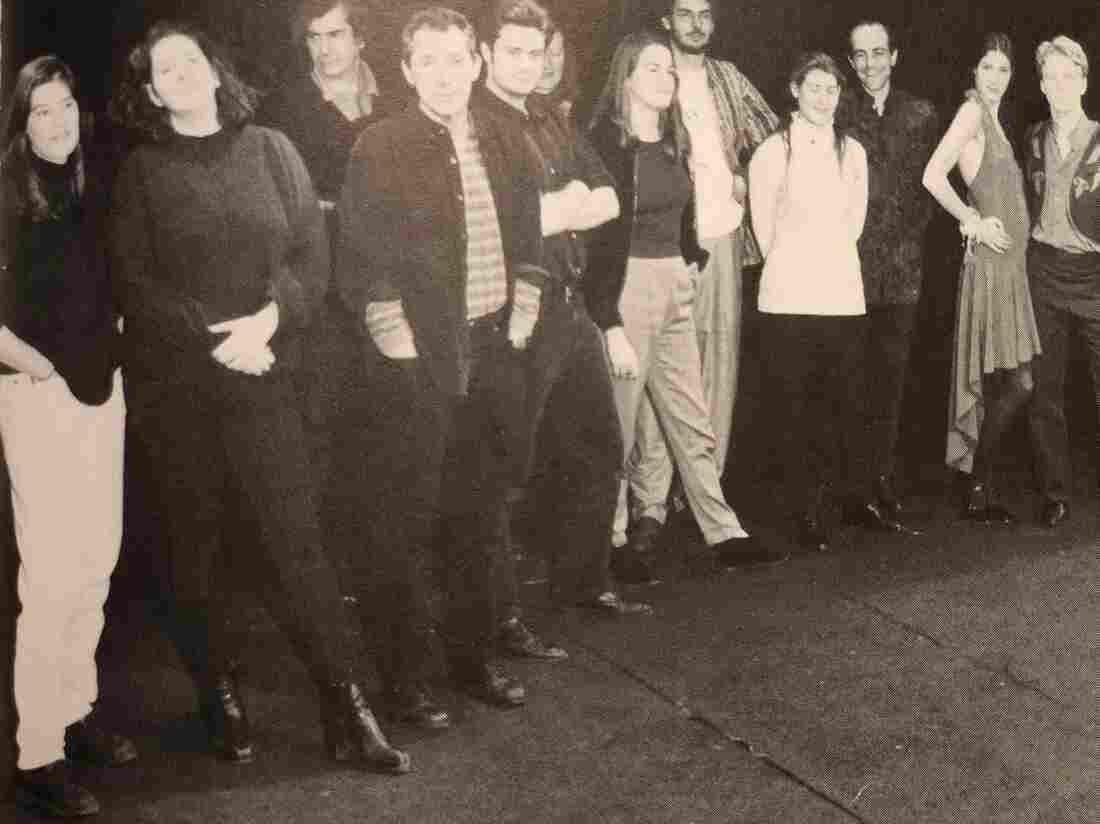 Jana Mestecky (left) poses for a cast photo during production of the play 'Des rats et des hommes,' directed by Israel Horovitz (front, third from left). The photo appeared in the French magazine, L'Avant-Scene in 1994. Mestecky is one of many women who have come forward accusing Israel Horovitz of sexual harassment and assault. Courtesy of Jana Mestecky hide caption 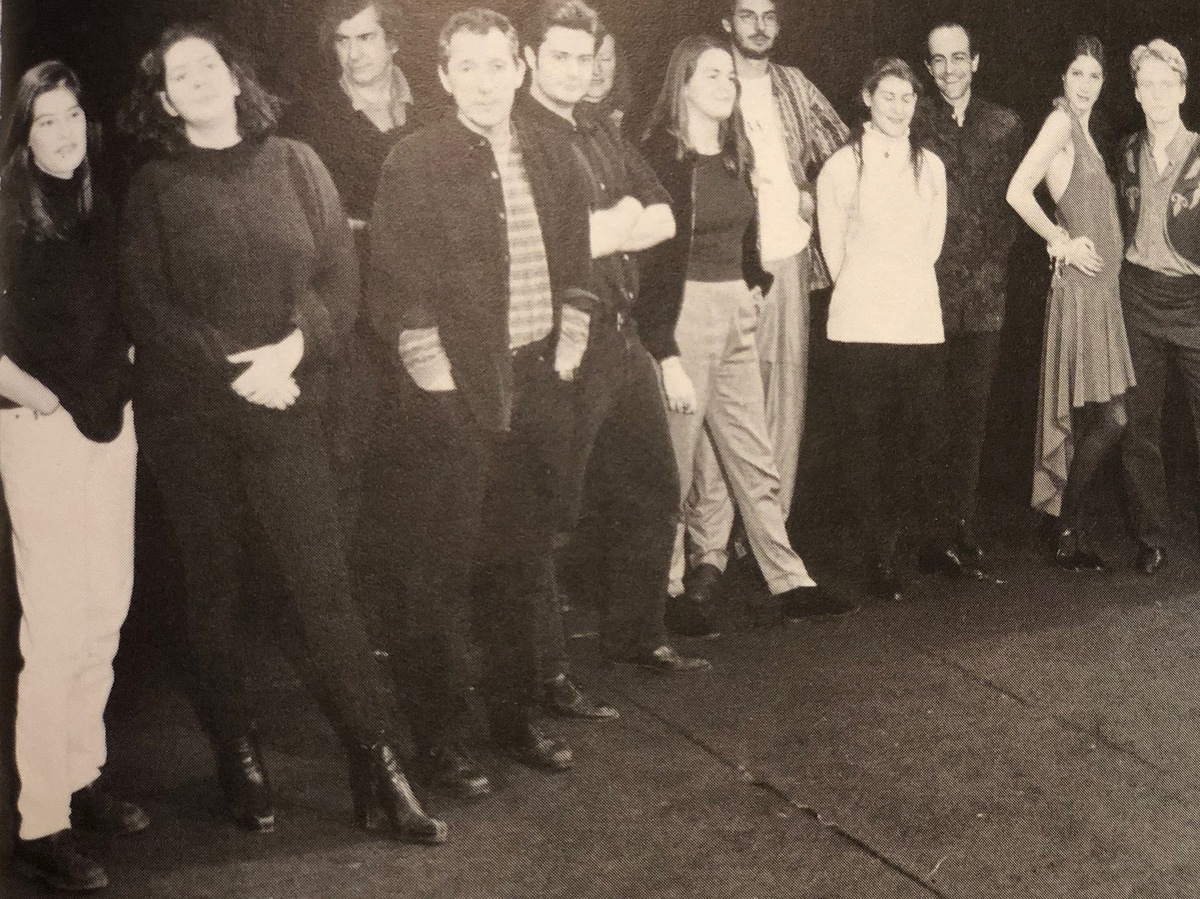 Jana Mestecky (left) poses for a cast photo during production of the play 'Des rats et des hommes,' directed by Israel Horovitz (front, third from left). The photo appeared in the French magazine, L'Avant-Scene in 1994. Mestecky is one of many women who have come forward accusing Israel Horovitz of sexual harassment and assault.

We are in the midst of a cultural reckoning in terms of how we respond to sexual harassment and assault. NPR's Shankar Vedantam wanted to know more about why this change is happening now. And, a warning here, this story includes accounts of sexual assault that may not be suitable for all listeners.

SHANKAR VEDANTAM, BYLINE: In May of 1989, a 19-year-old dramatic writing student, Jocelyn Meinhardt, arrived in the fishing town of Gloucester, Mass. Her ex-boyfriend's father, the playwright Israel Horovitz, had given her a summer job at his theater. The day after she arrived, Meinhardt says, Horovitz drove to her rented room and told her to hop in his car.

JOCELYN MEINHARDT: I remember so clearly 'cause it was really foggy day, so just everything about it was just creepy. And it wasn't late in the evening. It was just, like, random, like, dinnertime.

VEDANTAM: They drove to Horovitz's house and went inside.

MEINHARDT: We just locked the door, and then immediately, like, stuck his tongue down my mouth. And I remember just feeling so trapped.

VEDANTAM: Instead of running, Meinhardt froze.

MEINHARDT: It was so shocking. This is my ex-boyfriend's father. So I just - like, I said, I am not here for this. I don't want to do this. And he said, this was inevitable. And I started to cry.

VEDANTAM: Even as she wept, Meinhardt says, Horovitz took her upstairs and had sex with her.

MEINHARDT: Could I describe it as rape? Because I wasn't screaming and saying, no, no, no, no, was that rape?

VEDANTAM: She didn't want to lose her fellowship so she kept silent. Two more times over the summer, she says, Horovitz had sex with her. She says she didn't want to but didn't say no. On one occasion, she says, having sex with him felt like the only way to get him to help her with her writing. Horovitz declined to be interviewed, but in response to recent stories about him, he said that he has a different recollection of events. He told NPR that he finds sexual violence to be, quote, "abhorrent and intolerable." Jocelyn's summer at The Gloucester Stage Company was especially painful because the theater was producing a searing play about rape. It was called "The Widow's Blind Date." The playwright was Israel Horovitz.

MEINHARDT: They basically had to watch a play about a woman who was raped confronting her rapist. And, you know, I remember Israel saying to me at one point, like, can you imagine hurting somebody, like, what that would do, like, how ridiculous that is? And I was just, like, you have hurt me. Like, it just was such a mind bender.

VEDANTAM: Jocelyn eventually came to see what happened to her as rape. In 1993, a group of women contacted the Boston Phoenix newspaper with complaints about Horovitz. They alleged that he had engaged in forced kissing, unwanted fondling and vulgar language. The Phoenix published their accounts. Horovitz and the theater company largely dismissed the claims, and the story went nowhere. Princeton psychologist Betsy Paluck says what happened to the women who reported abuse served as a warning to others.

BETSY PALUCK: It's social proof at its most basic. We want to know. We wonder how we'll be treated if we step forward to blow the whistle on a certain kind of behavior, and we need sometimes to watch someone else do it and to see what realistically are the consequences.

VEDANTAM: When women found their stories made no difference, other women received a clear message - shut up, stay silent.

PALUCK: That is the kind of social proof that used to inform women's decisions about reporting sexual harassment.

VEDANTAM: In 1994, Jana Mestecky was 20 years old. She says Horovitz tried to forcibly kiss her and draw her into a bedroom. The outcome of the 1993 news story provided her with proof about what would happen if she spoke out.

JANA MESTECKY: I knew that you put yourself out there, and there will be nothing done other than you lose your job and you're bullied out of it.

VEDANTAM: So what's changed? Why are so many women speaking out today? To understand that, consider the story of Maia Ermansons. She met Horovitz when she was 11 and thought of him as a mentor and grandfatherly figure. But in 2016, when Ermansons was 21, she says Horovitz came over to her apartment to discuss some plays. He then forcibly kissed her and touched her breasts. Ermansons resisted.

VEDANTAM: Ermansons blasted out a Facebook post about the experience. She described what had happened but didn't name Horovitz. That might have been where the story ended. But then news broke about the "Access Hollywood" tape in which Donald Trump brags about assaulting women.

PRESIDENT DONALD TRUMP: And when you're a star, they let you do it. You can do anything.

BILLY BUSH: Whatever you want.

TRUMP: Grab 'em by the [expletive].

VEDANTAM: A few weeks after that, when Trump was elected president...

TRUMP: I pledge to every citizen of our land.

ERMANSONS: He just - you know, he can grab women's bodies. Israel grabbed my body. He didn't see it as mine, and Trump doesn't see it as the woman's body. Like, it's theirs.

VEDANTAM: She went back to her original post and named the playwright. Soon other women came forward, and in late 2017, The New York Times published their allegations. This time, theater companies canceled production of Horovitz's plays. The Gloucester Stage Company, which he'd founded, severed all ties.

Not long ago, I was talking to my wife, Ashwini Tambe, about all this. She's an associate professor of women's studies at the University of Maryland, and she's written about why the Me Too movement has gained such traction. What she told me about was the theory of horizontal violence.

ASHWINI TAMBE: Horizontal violence is when people turn on other people in their own lives when they are not able to actually effect change against more powerful targets.

VEDANTAM: It's a term used by the 20th-century psychiatrist and philosopher Frantz Fanon. He wrote about how people living under brutal colonial rule dealt with oppression. Think about pressure building up in a container. The energy needs a path to escape. If it can't blow the top off, it might explode sideways.

TAMBE: I think that the election of Donald Trump has served as a trigger, and it has provoked a great deal of fury and impatience because he represents, for many people, the ultimate unpunished predator.

VEDANTAM: Fanon used the term horizontal violence to describe rage that was misdirected or misplaced. In this case, Tambe says, horizontal action is a better term. It describes how many women have channeled their rage over Trump's election to call out men in their own lives who've sexually harassed them. Shankar Vedantam, NPR News.

MARTIN: Shankar hosts the Hidden Brain podcast and a radio show by the same name.