Accessibility links
Review: I'm With Her, 'See You Around' Aoife O'Donovan, Sarah Jarosz and Sara Watkins pool their feminine insights for a beguiling trio album.

Review: I'm With Her, 'See You Around'

Review: I'm With Her, 'See You Around' 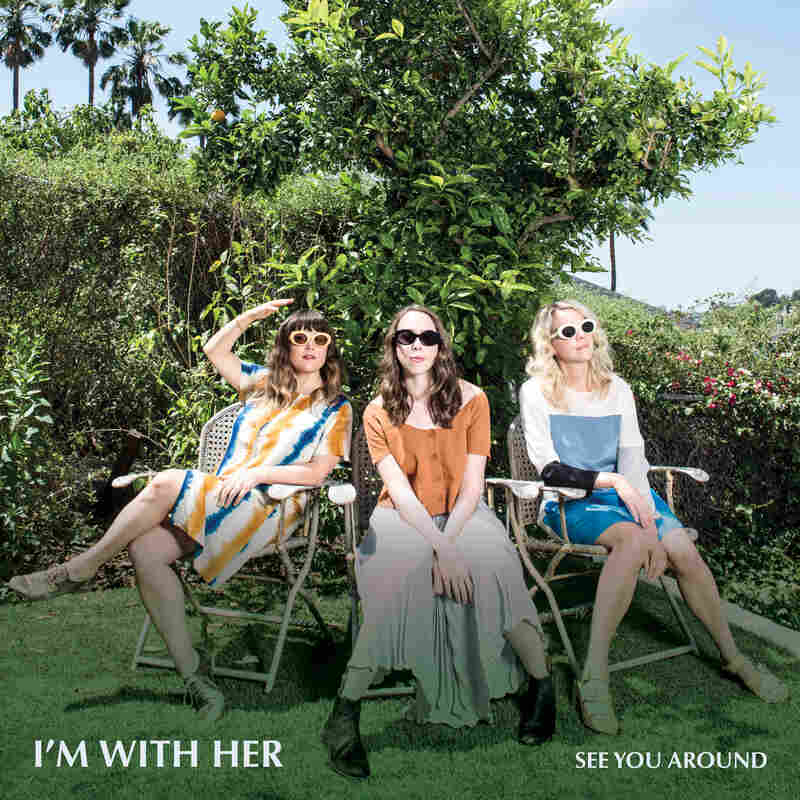 Collaboration presents seemingly endless possibilities for virtuosic music-makers like Aoife O'Donovan, Sara Watkins and Sarah Jarosz. These three talented women have worked at the intersection of sophisticated string bands, singer-songwriters and chamber music from very young ages, and inhabited myriad roles along the way, from fronting a group, to egging on well-matched band mates, welcoming friends to take casual turns at the mic and serving as duet partners, guest performers and side people.

Jarosz, Watkins and O'Donovan initially came together for a festival performance, which isn't at all uncommon in a scene full of impromptu pairings and picking parties. After that, they began doing a bit of touring together, working up a covers-heavy set and a seamless sound. Once they committed themselves to the trio, dubbed I'm With Her, they entered into what was, for them, the most intimate kind of creative exchange: co-writing.

All three of them were deeply familiar with folk, bluegrass and old-time standards that depicted women tethered to the old home place, pining for absent lovers. Each of their individual repertoires contain more modern, emotionally complex narratives, but playing in a band comprised solely of women was a chance to pool their feminine insights for their beguiling first album, See You Around.

Coursing through the dozen songs is a spirit of searching restlessness, an impulse to keep moving rather than getting stuck on romantic disappointments, expectations or propriety. That requires that their protagonists possess a certain vigilance, but Watkins, Jarosz and O'Donovan are careful not to let it tip into callousness. The vantages they capture are willfully open-hearted.

In "Ryland (Under the Apple Tree)," a track that unfolds in willowy, lolling 6/8 time, it's the woman who puts the moves on the object of her affection, albeit gently. "Overland" is a graceful update of a classic road song. The narrator, who could be male or female, is resolved to migrate to the West Coast in search of a better life. "Close It Down," built around a delicate fingerpicking figure and lyrical fiddle strokes, is slyly accusatory of a seducer with a wife at home.

Watkins sings "Ain't That Fine" — a breezy song about accepting past mistakes — with a slight spring in her step, and her band mates join her in sunlit harmony during the chorus. "Wild One" begins with airy "oohs" and conveys serene skepticism toward warnings based in fear. Jarosz flutters over the title track's brisk chord changes, singing of gathering herself after rejection while fleecy harmonies envelope her during pivotal lines. Propelled by a furtive, blues-inflected groove, "I-89" is a wily declaration of self-preservation and wanderlust. "Everybody wants a piece of me," O'Donovan objects. "Everybody wants to see what I see / But I can't just give it to you like that."

There are moments when the members of I'm With Her sing in perfect unison, then fan out into separate parts. It happens during "Crescent City" and "Hundred Miles" — the latter a song they plucked from the catalog of Gillian Welch — and each time, it feels like a quietly daring display of solidarity, with each singer displaying sensitivity to the others' timbre and breathing patterns. With the exception of producer Ethan Johns, O'Donovan, Jarosz and Watkins are the only instrumentalists on the album, self-sufficient and savoring the give and take.