Accessibility links
Review: Brandi Carlile, 'By The Way, I Forgive You' This is the sound of an artist laying it all on the line.

Review: Brandi Carlile, 'By The Way, I Forgive You'

Review: Brandi Carlile, 'By The Way, I Forgive You' 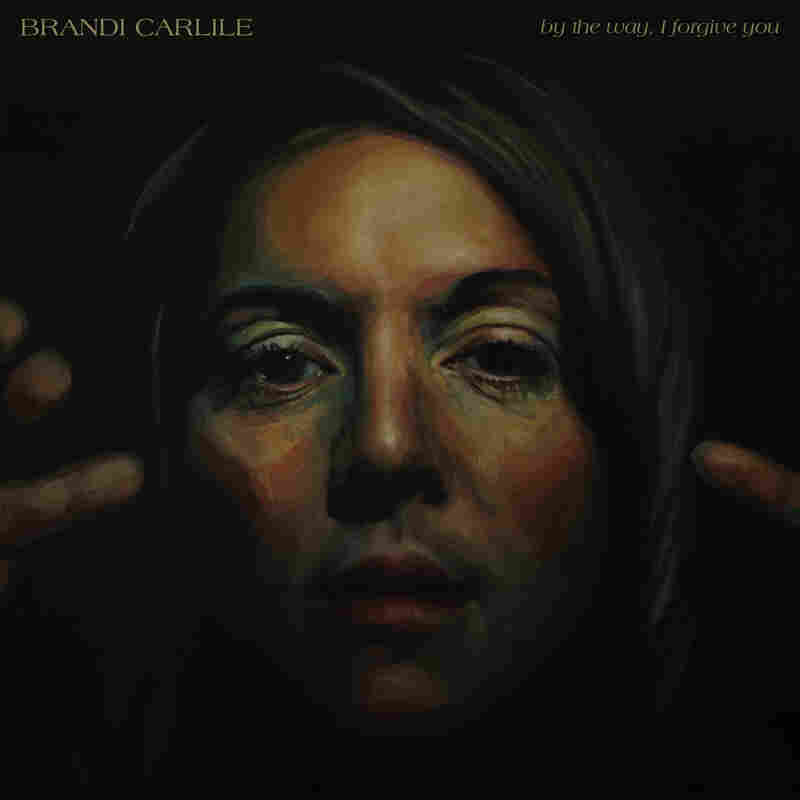 Empowerment anthems have had a good run since the early aughts, during which time we grew accustomed to hearing powerhouse pop singers turn downtrodden verses into launching pads for triumphant hooks. That tried-and-true way of displaying feminine strength made the moment of overcoming tribulation feel almost inevitable.

Throughout that era, Brandi Carlile devoted her big voice and pop instincts (typically filtered through arena-scale rock, torchy country or folk) to plenty of high-stakes songs, too, but there was nothing sleek about her performances. With the squalling urgency of her songwriting and the serrated exertion of her vocal attack, she's accentuated the emotional labor involved in speaking truth, confronting sources of pain and resisting alienation. To her listeners, it's registered as heroism.During the promotional campaign leading up to By The Way, I Forgive You, the sixth studio album by Carlile and her bandmates, twin brothers Tim and Phil Hanseroth, she posted an open letter to a Baptist minister she knew in her teens. In front of her family and friends, he'd refused to perform her baptism (an essential symbol of belonging to the faith tradition) on the basis of her sexuality. "I don't believe you did it to humiliate me," she wrote. "I think you struggled with the decision and simply ran out of time." She meant the note as a public display of forgiveness — not some sort of limp, passive, permissive gesture, but a deliberate, self-aware one that acknowledged how profoundly wounding the experience was for her. It foreshadowed the emotional resolve of the 10 tracks to come.Some of the songs on By The Way, I Forgive You apply humanizing empathy to the stories of people written off by society. The gospel-rocker "Sugartooth" takes seriously the torment that drove an old friend to addiction and suicide; "Fulton County Jane Doe," whose strummy guitar intro recalls Buffalo Springfield's "For What It's Worth," tenderly reclaims a murder victim from anonymity.

Though songs about breakups tend to focus on the immediate aftermath, burning anger as fuel, Carlile and the Hanseroths — who share all writing credits — capture how those feelings can gradually mellow in "Every Time I Hear That Song." The protagonist has faced the fact that she devoted herself to a one-sided partnership and found herself better off without it, but she hates to see her ex still mired in misery. There's a rueful, wilting quality to the melody of the chorus, which alternates between handsome three-part harmony and Carlile singing alone in a frayed, tender vibrato.

She illuminates how taxing devotion can be in "Party of One." It's just her and piano to begin with, the chords following her labored sighs as she sings of continually having to fight the impulse to withdraw from intimacy. The track eventually flowers into a lush, orchestral vamp. "I am tired," she murmurs several times in a row, before doggedly delivering a new refrain: "I am yours."

In "The Mother," Carlile measures the toll of parenthood. Over a circling acoustic guitar figure, she hurdles from one line to the next, her phrasing both insistent and conversational. "The first things that she took from me were selfishness and sleep / She broke a thousand heirlooms I was never meant to keep," Carlile testifies, her complaints leavened with affection. But she makes it clear that she doesn't regret having surrendered so much of her autonomy: "All my rowdy friends are out accomplishing their dreams / But I am the mother of Evangeline."

Carlile and the Hanseroths have recorded with a symphony in the past, so it's not like this is the first time that their music's received extravagant treatment. This time, they placed the production in the hands of Dave Cobb and Shooter Jennings, who had the grand, historic space of Nashville's RCA Studio A at their disposal. Cobb and Jennings make the most of string arrangements from the late Peter Buckmaster, and those three studio partners helped Carlile expand the range of her expression.When the propulsive country number "Harder To Forgive" builds to a thunderous, triplet march, she exerts herself without restraint, delivering tremulous, bleating high notes. During "The Joke," which is sure to become a fan favorite, she makes poignant use of the breaks in her voice, much as Dolores O'Riordan did. She spends the verses gently reassuring vulnerable kids who were ridiculed for not following masculine and feminine scripts, then soars toward righteous indignation at the chorus. "I have been to the movies," she sings, her passion forcing fissures in certain notes. "I've seen how it ends / And the joke's on them."

It's the sound of an artist laying it all on the line.

Album
By The Way, I Forgive You
Artist
Brandi Carlile
Label
Elektra
Released
2018