Accessibility links
How To Pack A Space Telescope Operating a telescope in space is a challenge, but so is moving one on Earth. An inside look at how NASA's James Webb Space Telescope moved from Houston to Los Angeles.

As complicated as it as to launch and operate a telescope in space, it's almost as complex to move a space telescope around here on Earth.

For the past 9 months or so, NASA has been testing the James Webb Space Telescope in a giant cryogenic chamber at Johnson Space Center in Houston, Texas. The $8.8 billion Webb telescope is the most powerful telescope NASA has ever built.

To say astronomers are looking forward to the launch of the Webb telescope is an understatement.

"For my own personal science I am ridiculously excited," says astrophysicist Jackie Faherty of the American Museum of Natural History. She studies space objects known as brown dwarfs, one of a wide variety of topics that the Webb telescope will provide data on.

Those topics range "from the first moments of when the universe was created, to what we're going to get to know about that are orbiting other stars," says Faherty, potentially including planets that could support life.

When the telescope launches next year, it is supposed to park in a spot a million miles from Earth and provide unprecedented glimpses of the earliest light in the universe.

But first it needed to move from Texas to California. 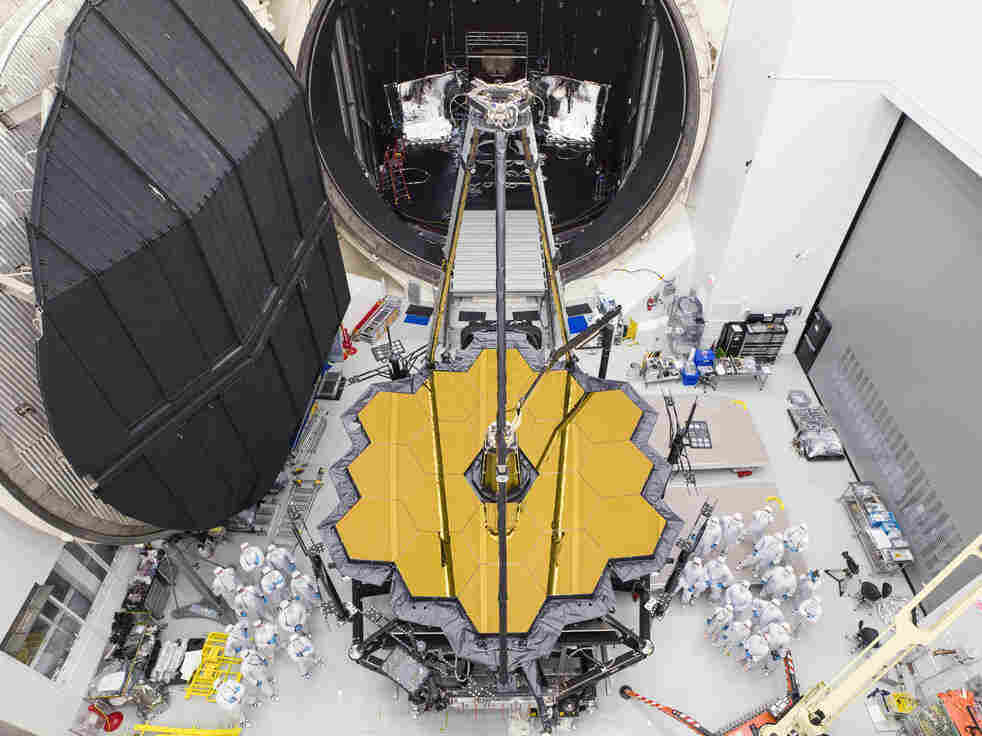 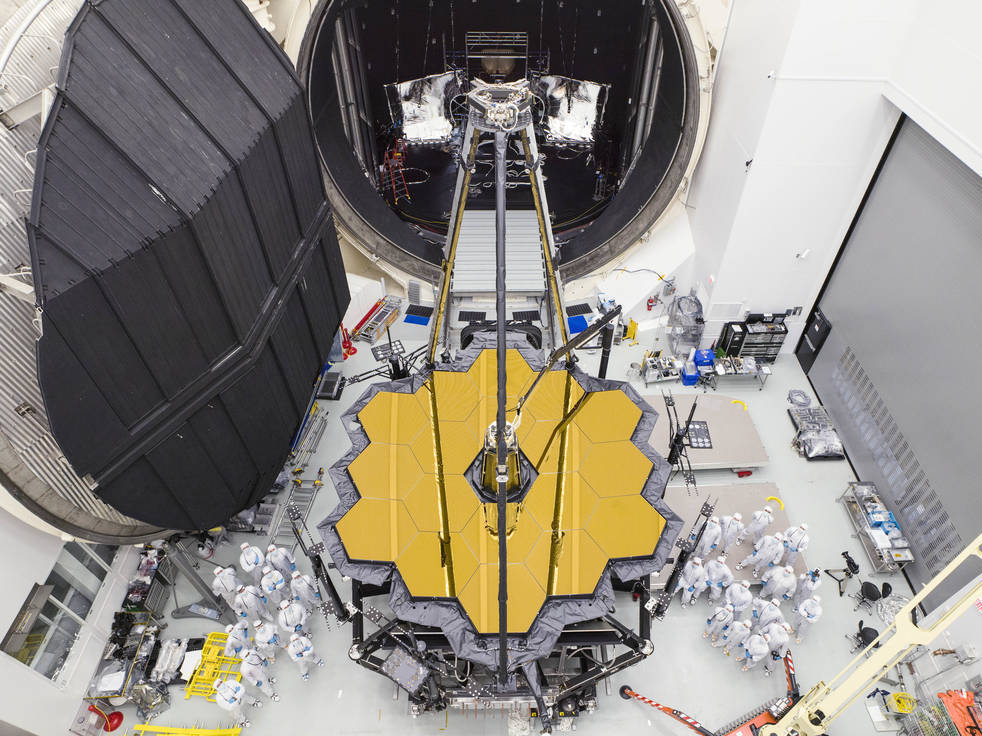 You can't just stuff a space telescope into a box when you're ready to ship it. Every step of the process involves special equipment, special planning and special attention. The packing process, from preparing the container to loading the telescope, took four days in January. Each step in the process is done slowly, to minimize the chance of error.

"We like it to go slow and steady," says Sandra Irish, an engineer at NASA's Goddard Space Flight Center. Her job is to make sure the telescope isn't subjected to any stresses it can't handle. It was designed to operate in the essentially weightless environment of space. Here on Earth gravity is a problem.

The entire packing process happened inside a multi-story clean room built to hold the telescope and its shipping container called STTARS, the Space Telescope Transporter Air, Road and Sea. STTARS is basically a flat pallet 110 feet long with a frame on top and a bright-white domed lid.

When it was packed, the telescope weighed about eight thousand pounds; it will get heavier when the sun shield and flight electronics get added later. Folded up for shipping, the telescope was about the size of a large school bus.

Once it was packed, the telescope was trucked over to nearby Ellington Air Force Base, loaded into a specially modified military cargo plane, and flown to Los Angeles. 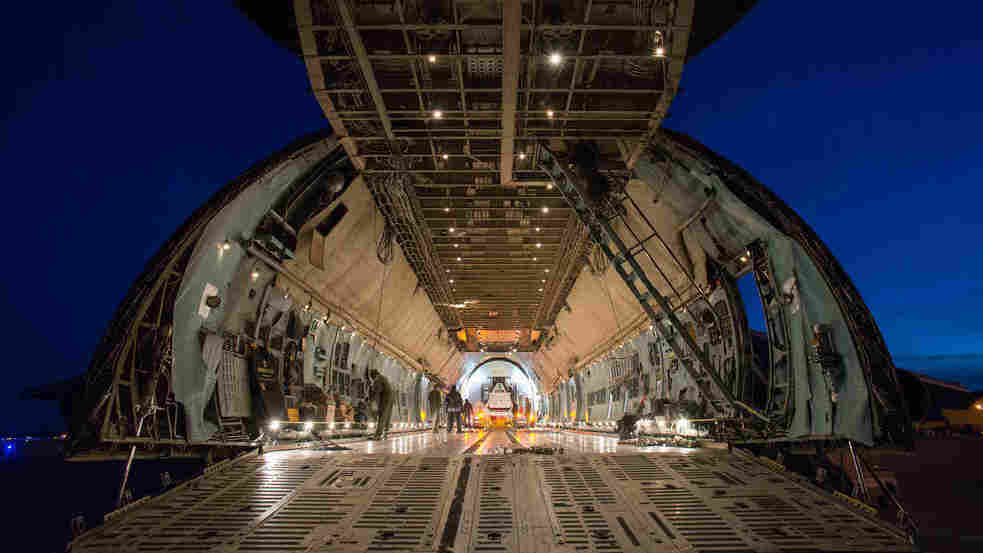 The cavernous hold of the U.S. military's C-5 cargo plane was designed to carry tanks. The Space Telescope Transporter for Air, Road and Sea (STTARS) used to transport the James Webb Space Telescope is so tall that it barely fits inside. Desiree Stover/NASA hide caption 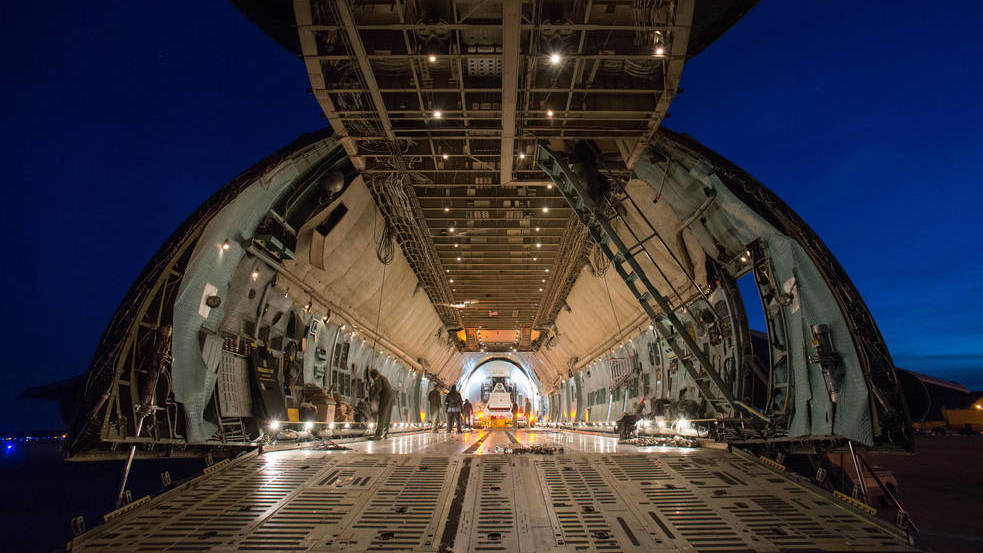 The cavernous hold of the U.S. military's C-5 cargo plane was designed to carry tanks. The Space Telescope Transporter for Air, Road and Sea (STTARS) used to transport the James Webb Space Telescope is so tall that it barely fits inside.

There, aerospace firm Northrop Grumman will get the telescope into its launch configuration, a process that will take months. Then it goes by ship next spring from Southern California to French Guiana, where it is scheduled to be launched on an Ariane rocket in June 2019.