Accessibility links
What You Need To Know About Memo Mania: Waiting On Democrats' Countermemo The White House expects an answer Thursday from the Justice Department about how much of a Democratic memo could be declassified. The president will then decide whether it actually becomes public. 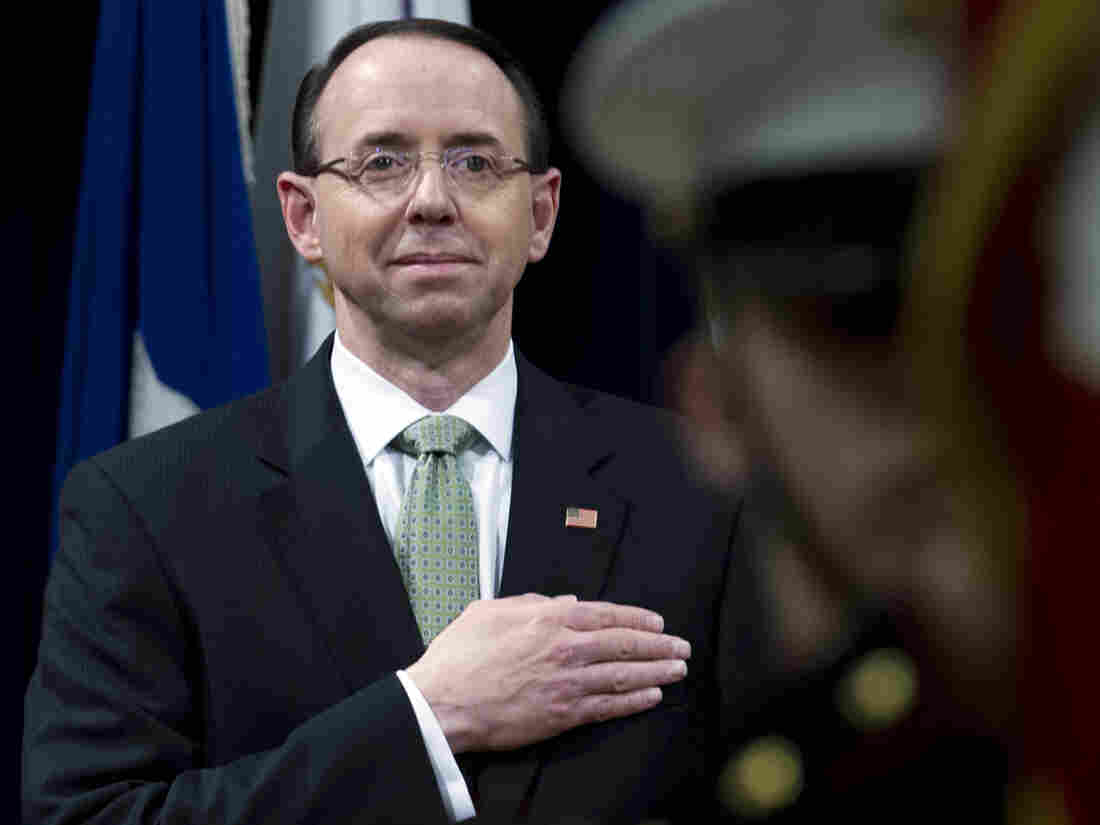 Deputy Attorney General Rod Rosenstein is recommending to the White House how much of a secret countermemo by intelligence committee Democrats should become public this week. Jose Luis Magana/AP hide caption 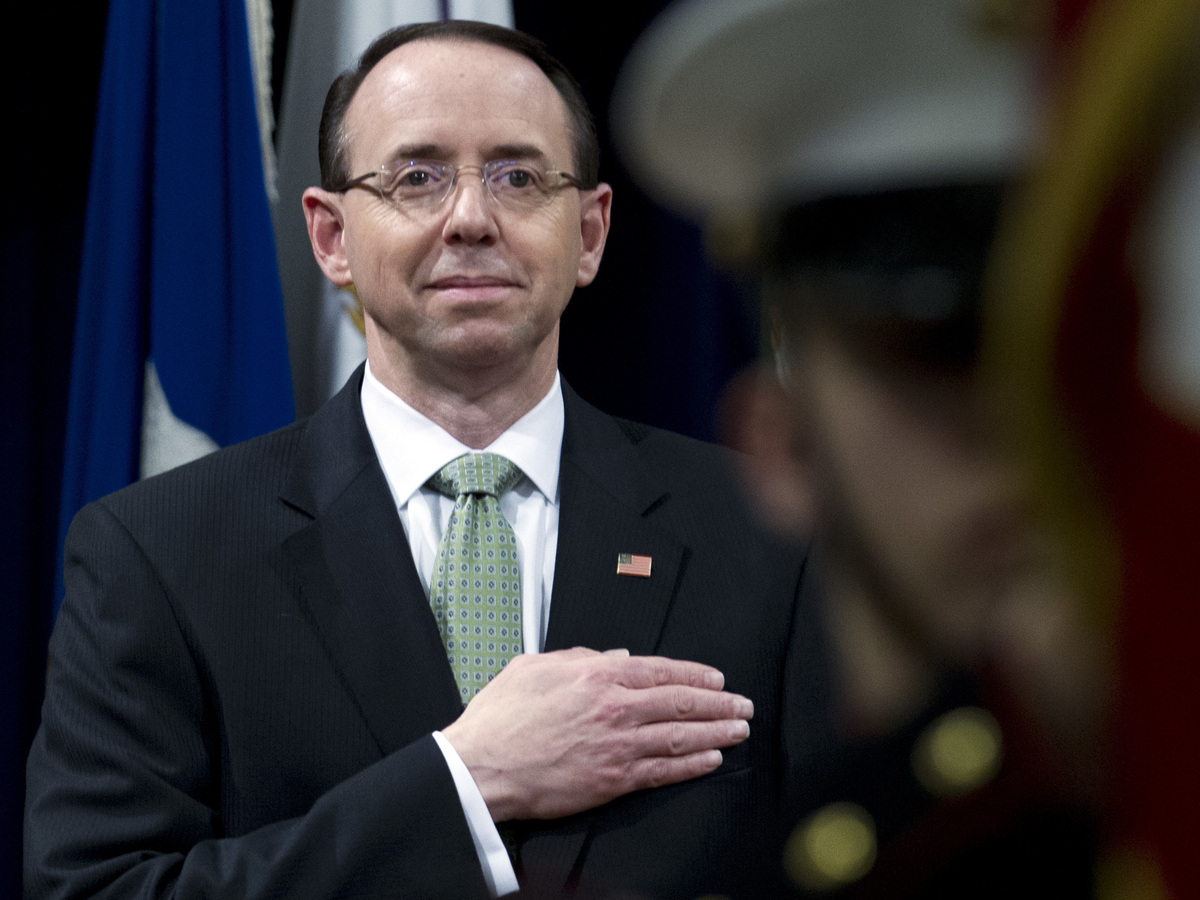 Deputy Attorney General Rod Rosenstein is recommending to the White House how much of a secret countermemo by intelligence committee Democrats should become public this week.

Memoranda have only been Washington's favorite dueling weapons for a short time but the art of wielding them has evolved quickly.

Witness the slow-motion jiujitsu between President Trump and his Democratic antagonists this week over a secret countermemo that rebuts the once-secret GOP memo unveiled last week.

White House officials say they'll give Democrats a fair hearing. But would they let something out that embarrasses Trump? Could the administration redact portions of the memo without being accused of a political cover-up? And might deferring key decisions about the memo to the FBI and Justice Department help Trump politically?

Complicating matters: If the first memo was relatively straightforward, people on the inside say the second one is not.

"My initial cut is this one is a lot less clean," White House chief of staff John Kelly told reporters on Capitol Hill.

"At the end of it all it will be guys like [Deputy Attorney General] Rod Rosenstein, [Director] Chris Wray from FBI, certainly the national security attorneys at the White House, giving the president a recommendation on it," Kelly also said.

The actual document is still secret, but based on descriptions from people who have read it, the Democrats' memo uses more pages — 10 as compared to Republicans' 4 — and many more footnotes to respond to the initial case made by the House intelligence committee's chairman, Rep. Devin Nunes, R-Calif.

Nunes' memo charges that politically biased officials in the FBI and Justice Department abused their surveillance powers in asking for a warrant to monitor the communications of a onetime Trump campaign foreign policy adviser, Carter Page.

The memo supports a narrative that calls the FBI's Russia investigation scurrilous and part of a "deep-state" conspiracy out to get the president.

House intelligence committee ranking member Rep. Adam Schiff, D-Calif., responded to those charges in the Democrats' countermemo. Republicans used their majority to withhold Schiff's memo at the time they voted to release the Nunes memo, which eventually appeared last Friday.

This week, the panel agreed to greenlight the release of the Democratic response, starting the review process that continues now.

The FBI and Justice Department deny they have done anything wrong.

Deputy Attorney General Rosenstein met with Trump on Tuesday, the White House said, to talk about the countermemo and take aboard the declassification review.

Trump and his administration ultimately remain in charge of selecting what from their opponents' memo becomes public and what does not. Nunes' allies complained this week to CNN that Schiff had deliberately drafted the countermemo with so much secret information that it obviously would have to be redacted.

That could set the stage for Democrats to accuse Trump of abandoning the White House's earlier support for transparency and, specifically, of hiding things to protect the president in the Russia matter. Administration officials must decide whether they're willing to play that game.

One reason they might not: Schiff has access to the same kind of official secrets as Nunes. If he documented that, for example, other Trump campaign associates besides Page were under surveillance, with none of the complicating factors that gave rise to Nunes' complaint, the president might not want that information to be public.

One reason the White House might play ball: Trump and his allies in Congress have laid groundwork for months about the conspiracies they say are swirling within the FBI and Justice Department. Now that Trump and Kelly have said they're pushing decisions about releasing the memo to Rosenstein and Wray, the administration could try to tie them closer to the partisan attacks by Democrats — and have more "evidence" of what they call bias.

The House intelligence committee's Democrats say that making partisan targets of the FBI and DoJ damages those institutions.

"It is tragic, if all too predictable, that this president would allow the release of the memo despite FBI and DOJ's expressions of 'grave concerns about material omissions of fact that fundamentally impact the [Republicans'] memo's accuracy'," the Democratic minority said.

"But most destructive of all may be the announcement by Chairman Nunes that he has placed the FBI and DOJ under investigation, impugning and impairing the work of the dedicated professionals trying to keep our country safe," the Democratic lawmakers added.

It isn't clear yet how much of the Democrats' countermemo might become public or when, but Kelly said that he expected an answer by the end of the day on Thursday.

Then, he said, "We'll go in and brief the president on it and just like we did the first time, give him a recommendation as to what he should do going forward."