Accessibility links
Tax Cuts Put Oklahoma In A Bind. Now Gov. Fallin Wants To Raise Taxes A plan drawn up by civic leaders to raise taxes has the Oklahoma governor's support but may fail at the hands of statehouse Democrats. 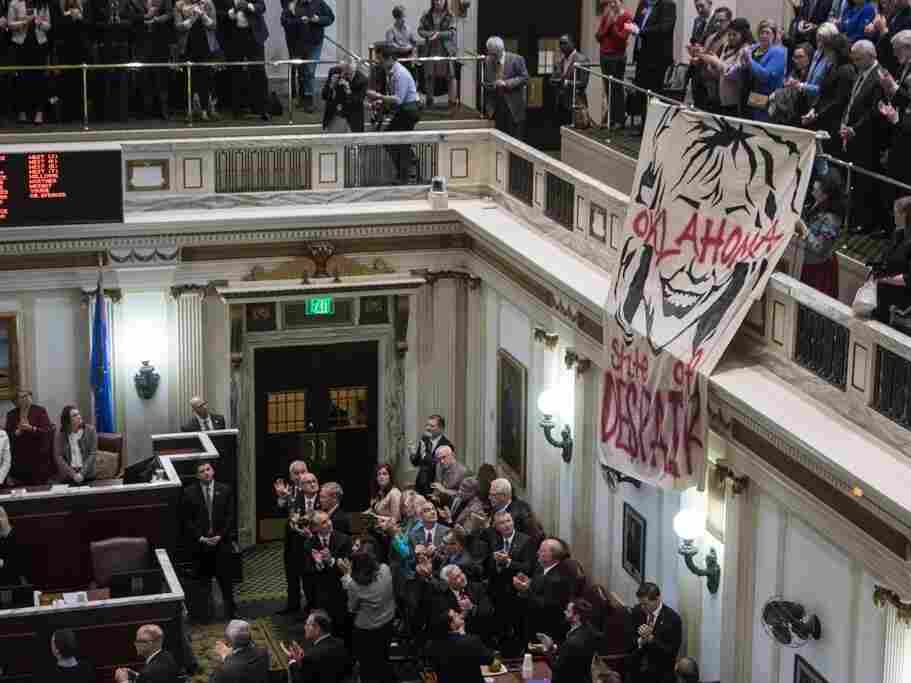 Protesters unfurl a caricature of Oklahoma Gov. Mary Fallin at the end of her State of the State address on Monday. Emily Wendler/StateImpact Oklahoma hide caption 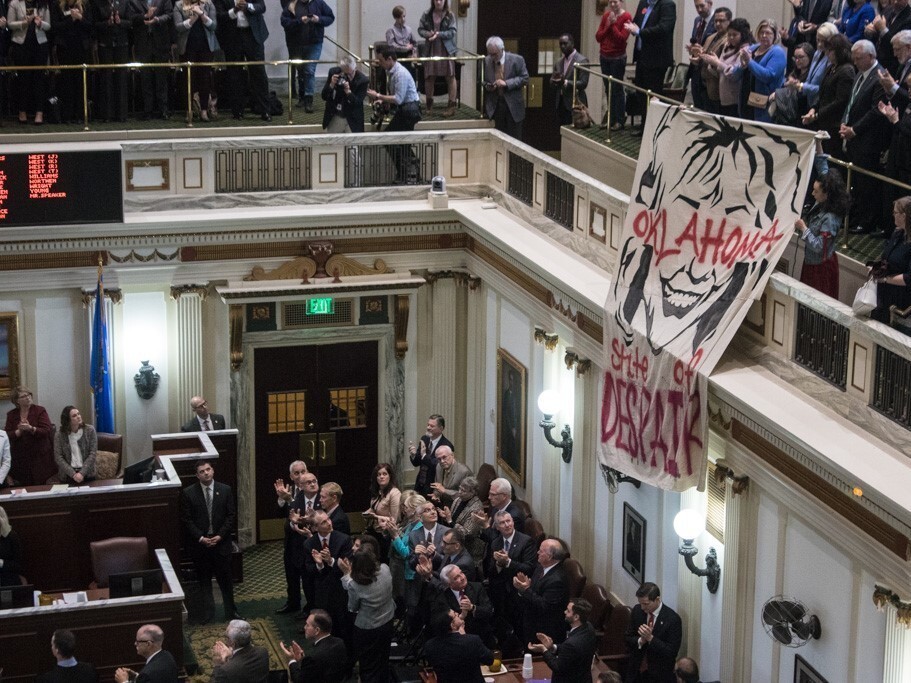 Protesters unfurl a caricature of Oklahoma Gov. Mary Fallin at the end of her State of the State address on Monday.

Oklahoma taxpayers are fed up.

Riding high on the oil boom of the late 2000s, the state followed the Kansas model and slashed taxes. But the promised prosperity never came. In many cases, it was just the opposite. 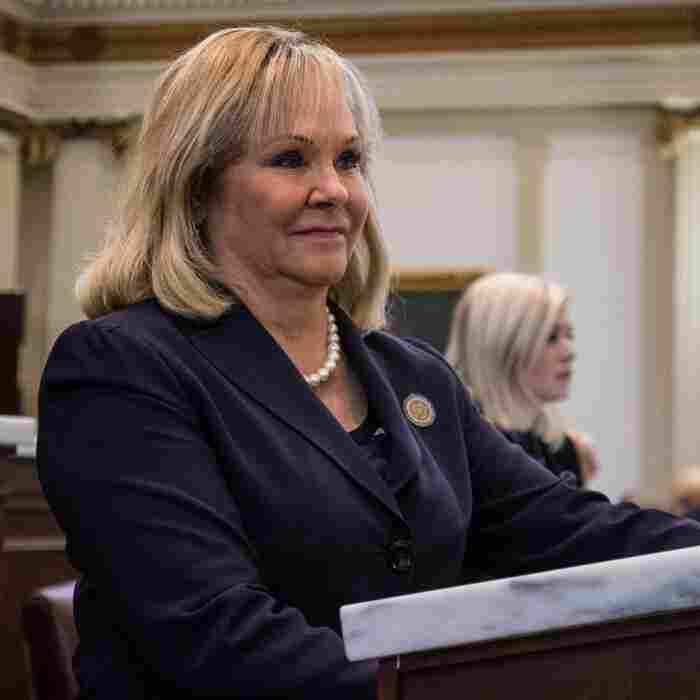 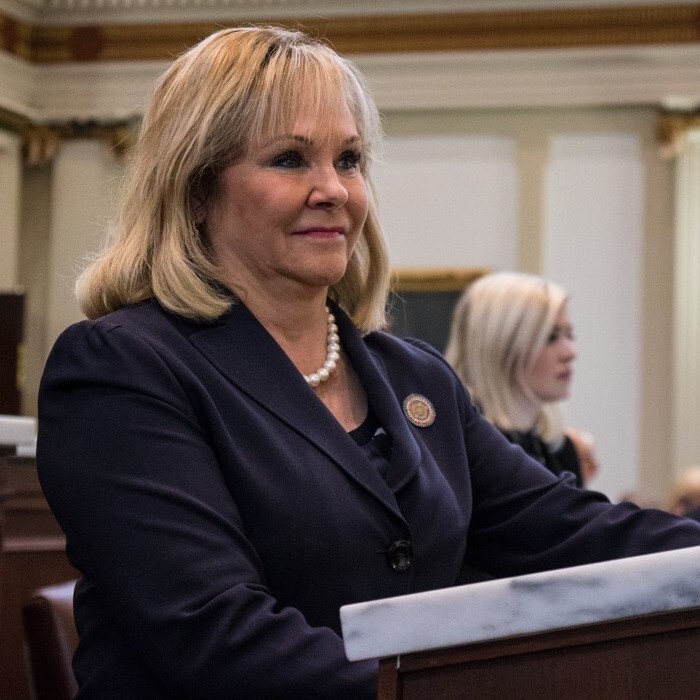 Oklahoma Gov. Mary Fallin during her State of the State address.

Around 20 percent of Oklahoma's schools now hold classes just four days a week. Last year, Highway Patrol officers were given a mileage limit because the state couldn't afford to put gas in their tanks. Medicaid provider rates have been cut to the point that rural nursing homes and hospitals are closing, and the prisons are so full that the director of corrections says they're on the brink of a crisis.

In her State of the State address Monday, Gov. Mary Fallin expressed the state's frustration.

"We have two clear choices," she said. "We can continue down a path of sliding backwards, or we can choose the second path, which is to say 'Enough is enough! We can do better! We deserve better! Our children deserve better, too!' "

Many of the tax cuts and subsequent revenue failures have happened on Fallin's watch. Now she wants to fix it, and she's gotten behind a large coalition of business leaders who have come up with a plan to raise taxes and enact reforms.

A drowning man will grab any lifeline, whether it's a good one or not.

"It's math," said banker David Rainbolt, a leader of the group known as Step Up Oklahoma. "You can look at the problems we have and realize that there's not sustainable revenue going forward. This problem will occur over and over and over again in a commodity-based economy like ours unless we create revenue streams that create stability."

But there's a problem. When you pass a tax cut in the state of Oklahoma, it may as well be permanent. In the early 1990s, in reaction to a tax increase, voters passed a ballot measure requiring 75 percent of the Legislature to vote in favor of any revenue hike.

This year, that supermajority requirement has given the tiny Democratic minority in Oklahoma the power to derail any plan. And even though the Step Up scheme meets many of their demands, House Minority Leader Steve Kouplen thinks it's just not enough.

"A drowning man will grab any lifeline, whether it's a good one or not," he said. "One has been thrown to us. We think it needs to be tweaked, and we think some true compromise needs to take place to change it."

Democrats believe oil and gas companies have gotten rich while poor Oklahomans have borne the brunt of the cuts to state services. The Step Up plan, they say, doesn't do enough to protect the poor from paying to fix a mess they didn't make.

Rainbolt and the bipartisan business coalition that introduced the compromise plan say the state is in a mess and there is no easy way to fix it. They point to the fact that when they created the plan, business leaders from competing industries sat down at a table to find a solution and everyone had to give.

"We'd created something that no one in the room liked every part of but that everybody in the room agreed would move us forward." Rainbolt said. "We thought it was saleable to the Legislature, and it appears that it is."

But the spirit of compromise hasn't reached lawmakers yet. They're now in their second special session trying to pass a budget for the current fiscal year.

Lobbying is fierce for the Step Up plan, and leaders in the Legislature say they're hoping to vote on it next week. So far, the Democratic minority in the Oklahoma House of Representatives says it needs more work before it will vote in favor.

At this point, the gridlock continues.