Accessibility links
'Atlanta Monster' Podcast Hopes To 'Close The Door' On 1970s Child Murders The true-crime series re-examines the killings of 28 young black males. "It was the largest task force ever assembled ... it ended up getting the nation's attention," co-creator Donald Albright says. 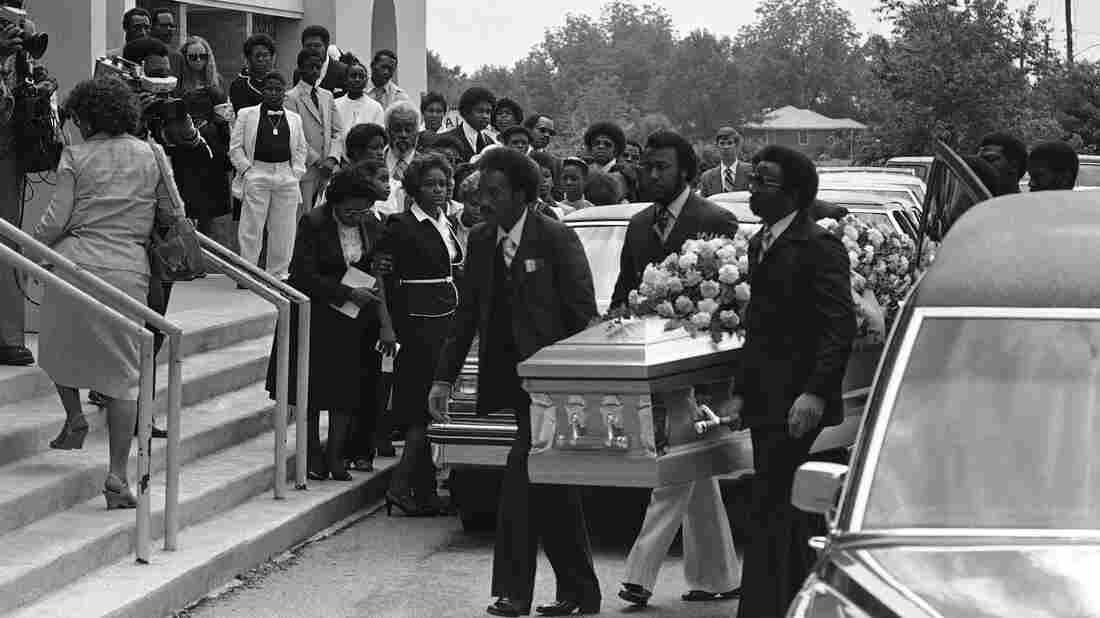 Janie Glenn (second from left) is assisted by friends as the coffin of her son, William Barrett, is carried into an Atlanta church on May 16, 1981. Barrett was the 27th young person killed in the Atlanta murders. Garry Gardiner/AP hide caption 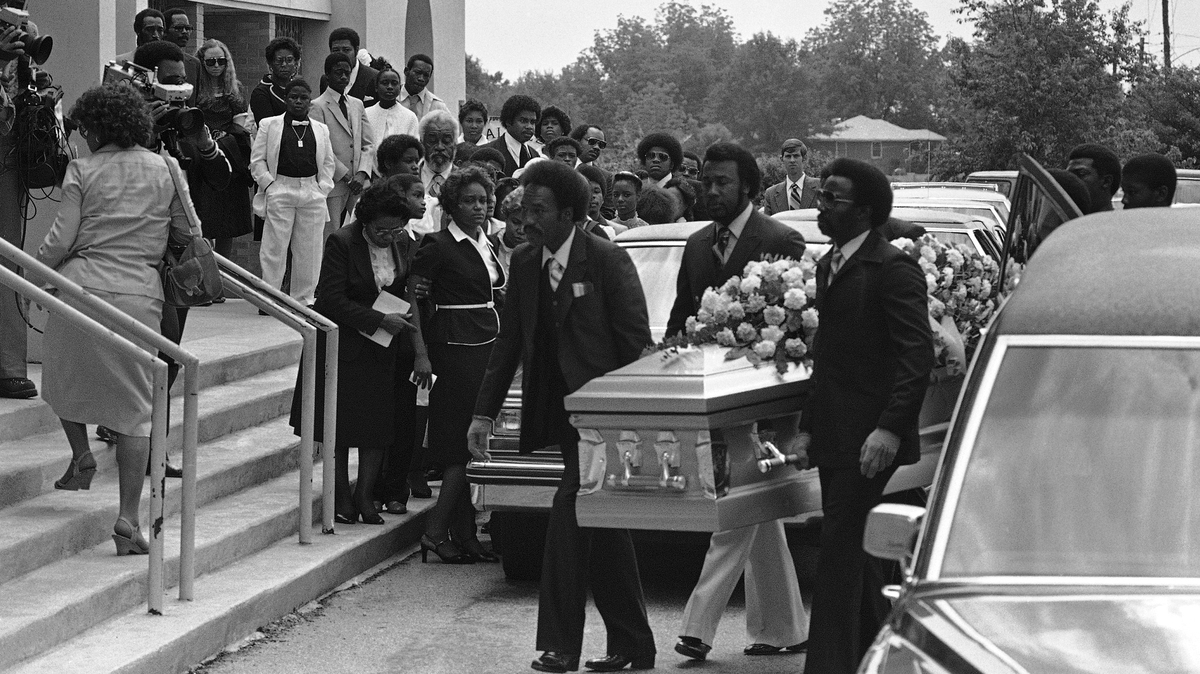 Janie Glenn (second from left) is assisted by friends as the coffin of her son, William Barrett, is carried into an Atlanta church on May 16, 1981. Barrett was the 27th young person killed in the Atlanta murders.

The reason that TV news started broadcasting that question every night: Many people didn't know where their children were. Kids were disappearing. Their bodies would turn up in the woods, strangled.

Between 1979 and 1981, at least 28 black children and young adults were killed in Atlanta. Those murders are the focus of the true-crime podcast Atlanta Monster, created by Payne Lindsey and Donald Albright.

"The police had no idea what was going on," Lindsey says. "They didn't know if it was a serial killer or if there was any pattern to this at all. But as the numbers grew, the community in Atlanta became very paranoid and started lobbying for the government to do something about this."

On the racial climate in Atlanta when the child murders began

Donald Albright: I mean, you gotta think, it's 1980 Atlanta. We're in the South. You know, it's 15 years removed from civil rights legislation. So there's already a tension, and the city's going through a change: first African-American police chief, first African-American mayor. So everything is on high alert when it comes to racial tensions. So then dozens of African-American children start disappearing and then are found being murdered. You know, the first thing people went to is, "This is somehow racially motivated." They didn't know who or why, but the first people you would think of in that instance would be, "This has to be some sort of Ku Klux Klan conspiracy." And there really wasn't a better answer out there. Especially because of the times.

On how police first handled the missing children reports

Albright: What I see is, they looked at these kids and they said, "OK, well that kid was probably a runaway." That's what they say a lot of times when it's a poor black child that goes missing: "Probably a runaway, probably [will] turn up in a week or two, or went to his friend's house. No big deal." And then these kids were gone for long periods of time, and then bodies were being discovered. And then it was the fight to get the deaths noticed. It's just one of those things where I think people wished that it wasn't what it was. But the fact that these were victims that you could easily ignore, you know, I think that played a lot into it.

On what suggested there might be a serial killer involved

Payne Lindsey: Well, at first it was just the development of a pattern. They started seeing kids showing up in the same places. They were dying by asphyxiation. And the FBI was able to develop this sort of pattern of similarities in all these killings. And it was kind of a messy operation because it was just so many people involved. But the FBI was able to identify a pattern, and they sort of built this profile of who this killer may be, and they literally staked out bridges in Atlanta waiting for another body to come, to try and catch this person. 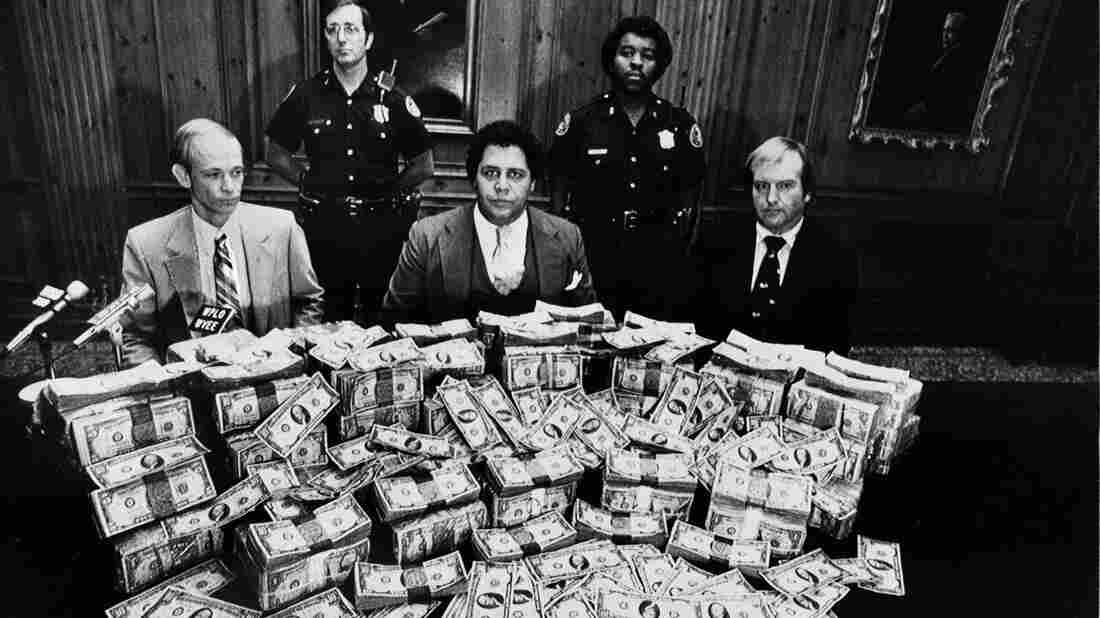 In 1981, Atlanta Mayor Maynard Jackson is flanked by security guards in his office as he poses with $100,000 in reward money offered for clues to the deaths of 17 Atlanta children. AP hide caption 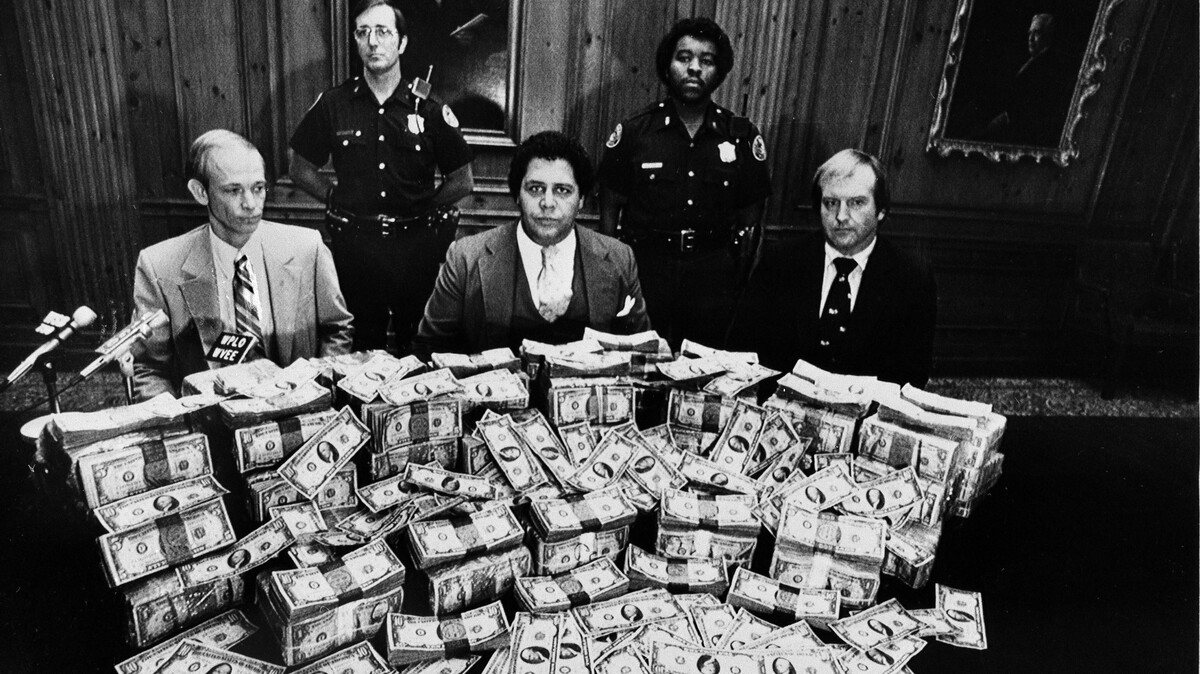 In 1981, Atlanta Mayor Maynard Jackson is flanked by security guards in his office as he poses with $100,000 in reward money offered for clues to the deaths of 17 Atlanta children.

Lindsey: A police recruit heard a splash down there in the water by the bridge, and that was FBI special agent Mike McComas, and he was in charge of the bridge stakeouts in Atlanta. And there were about 14, 15 bridges they were staking out for 30 days. And this recruit hears a large splash, which he thinks is a body, shines his flashlight on the water but doesn't see anything — sees ripples. They see a car up there on the bridge. They stop it, and then they find Wayne Williams. And you know, after that they begin to tail Wayne Williams and look into this guy.

Albright: Three days later, the body of Nathaniel Cater was found about 500 yards downriver. So that's what clued them into that that must be, you know, they theorized that was the body he dropped that night. It wasn't long after that he was arrested.

On the case that investigators built against Wayne Williams 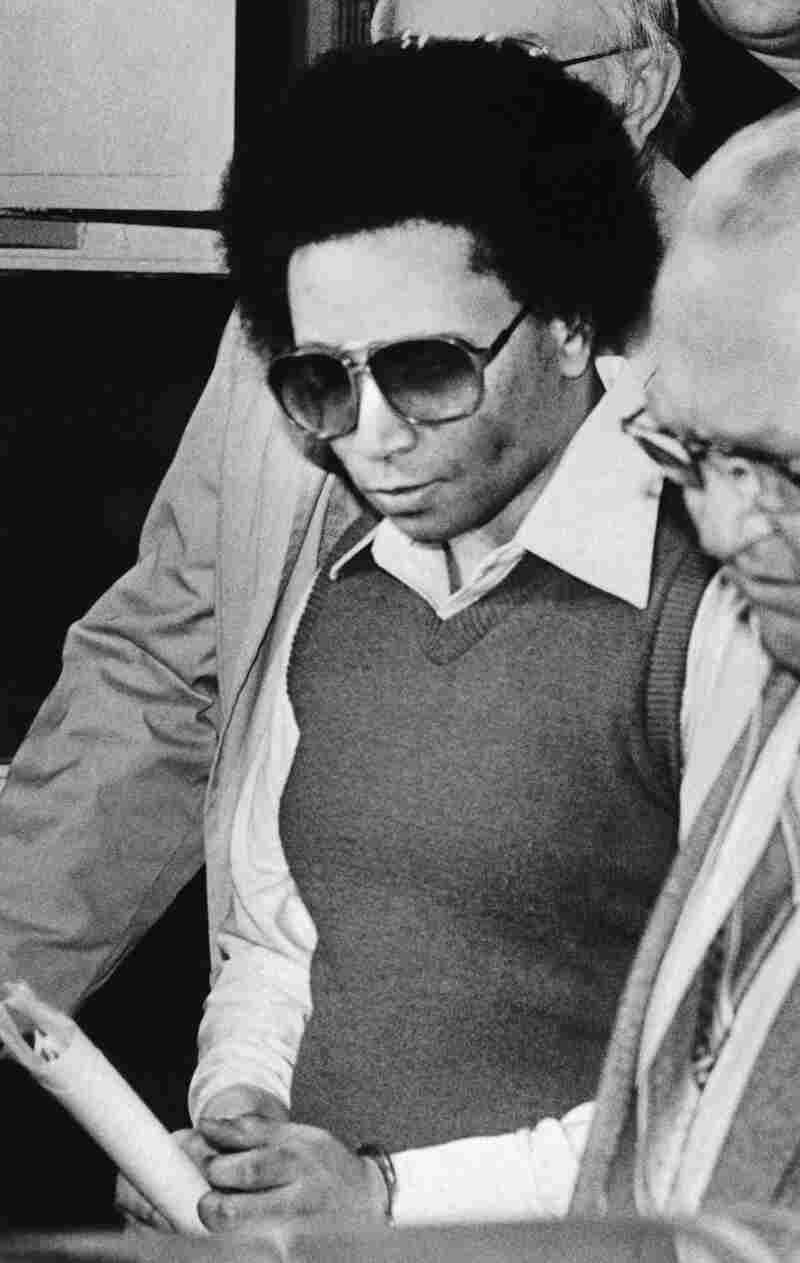 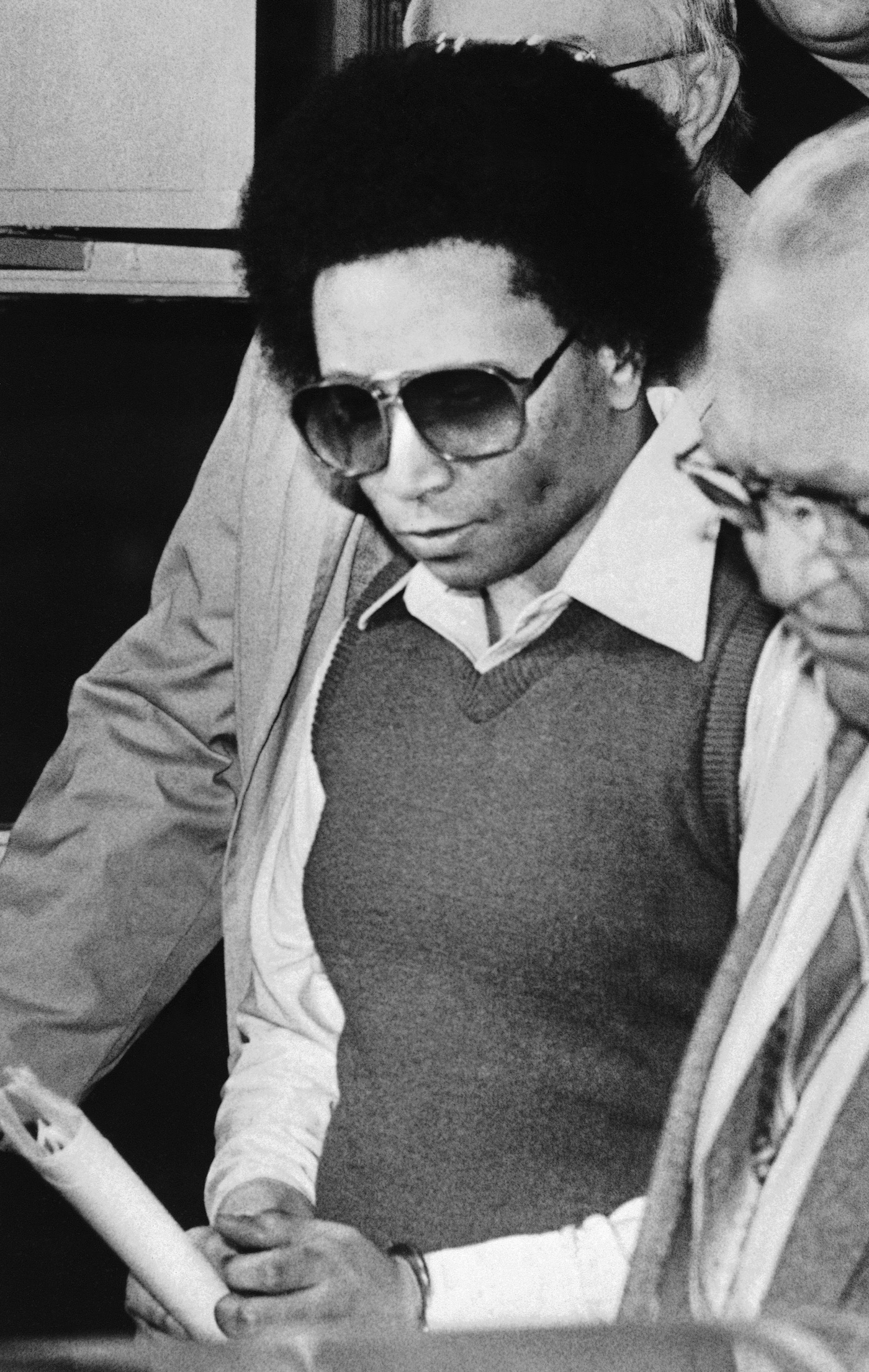 Wayne Williams leaves jail in Atlanta on Jan. 25, 1982, escorted by Fulton County sheriff's deputies on his way to court during his trial on charges of killing two young Atlanta men.

Lindsey: It was carpet fibers and dog hairs they were able to link from Wayne Williams — his car, his home — to some of the victims. Besides that, everything else was mostly circumstantial. And he obviously had failed a couple of polygraph tests, but those were inadmissible in court. Besides that, they didn't have much against him.

Lindsey: The biggest question that surrounds that case is, "If Wayne Williams is the Atlanta Monster, is the Atlanta child murderer, then why was he only convicted of killing two adults?" And that's how the families feel, that's how some people in the community feel. It just doesn't add up all the way.

On what happened after Williams was arrested

Lindsey: That's one thing that the FBI kind of hangs their hat on is that the killing stopped. Obviously the killings didn't stop entirely. Unfortunately, there's been other kids who have been murdered since 1982. I think what they really mean is that the pattern cases decreased.

Albright: And it was a shaky pattern to begin with. Some of these kids had stab wounds, some of them had genital mutilation, some of them were beaten with objects, some of them were just strangled. They were found in various places, various counties, so there's not a distinct pattern that you would think of, like when you, you know, people who are accustomed to watching serial killer movies or hearing about this serial killer calling card, there was nothing like that, that definitely tied Wayne Williams to all of these victims.

On whether they've discovered more questions than answers

Lindsey: I mean, this case is so complicated. It's so convoluted. There's information everywhere, that sometimes ... the more you dig, the more questions you have. But in that same process, you're answering some of the questions too. I think that there's just so much gray area in this case, it's time for somebody, something — a project like this — to close the door on this thing. It's been way too long, and this, for me, is one of the last chances to do it.

Monika Evstatieva produced and edited this interview for broadcast. Sydnee Monday and Patrick Jarenwattananon adapted it for the Web.