Accessibility links
In Rural New Mexico, Ranchers Wage Their Battle Through The Courts Cliven Bundy is calling on other ranchers to rebel against the government after the collapse of a federal conspiracy case against him. But it's unclear how, or even if, other ranchers will respond. 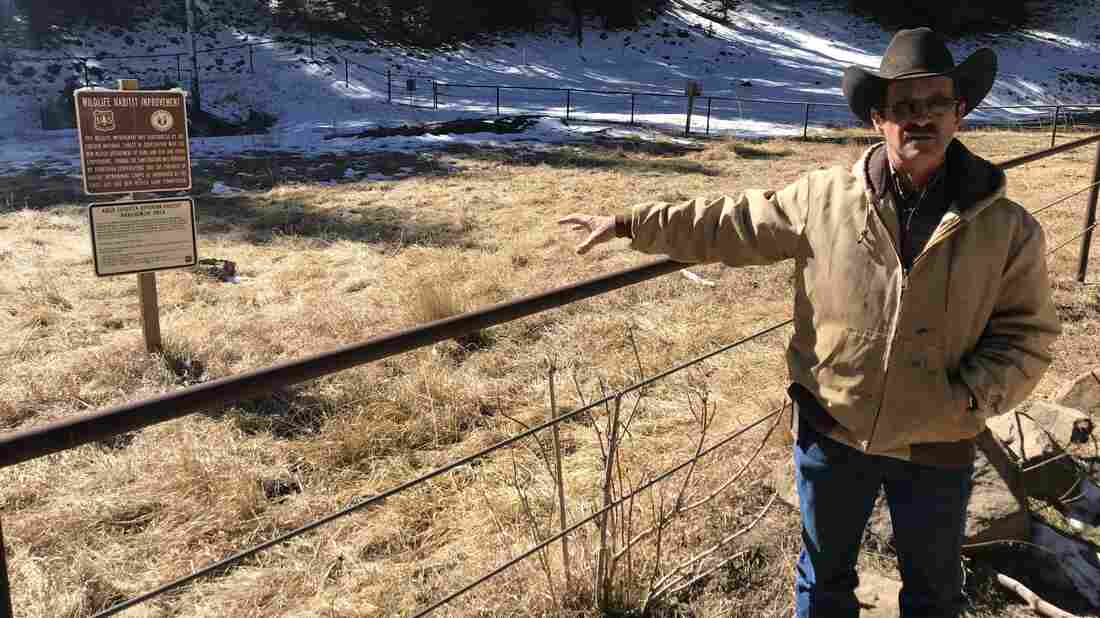 Gary Stone of the Otero County Cattlemen's Association says ranchers held off activists who wanted a Bundy-style protest over control of federal land. Instead they waged their battle in the courts. Kirk Siegler/NPR hide caption 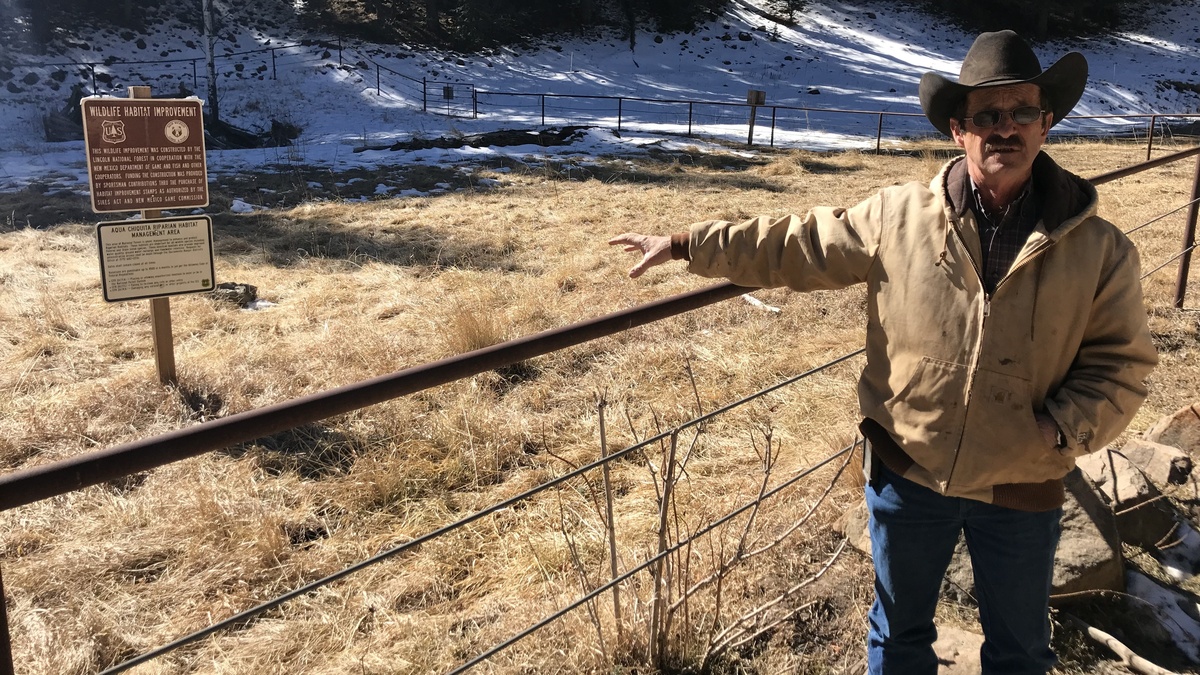 Gary Stone of the Otero County Cattlemen's Association says ranchers held off activists who wanted a Bundy-style protest over control of federal land. Instead they waged their battle in the courts.

Ranchers across the West watched intently as the federal government prosecuted a Nevada ranching family for leading armed militia standoffs over cattle grazing on public land. Last month, the case against Cliven Bundy and his sons collapsed and now they're calling on other cattlemen to defy federal grazing rules and regulations.

The question now is whether – or if – that will resonate among scores of other ranchers who rely on federal public land to graze their cattle.

A visit to the mountains in a remote corner of southern New Mexico may offer a glimpse into the more mainstream heart of the industry.

"It's rugged country, a lot of it is not accessible any other way than horseback," says rancher Gary Stone as he looks across the lush forested plateau of the Sacramento Mountains.

At 9,000 feet above sea level in places, the mountains tower over the brutal deserts of White Sands and the sprawl of El Paso, Texas, below. This island of grasslands and forest has long been coveted by ranchers and loggers. Families like the Stones trace their ancestors here to the days of homesteading, long before Congress gave control over it to the U.S. Forest Service more than a century ago to regulate it.

Like a lot of the Southwest, the land here had historically been overgrazed. But decades later, ranchers like Stone see themselves as conservationists. They have to, otherwise their livelihoods — and more to the point the health of their cattle — would falter.

Near the town of Cloudcroft, in a meadow of crusty, old snow, Stone hops out of a pickup and walks toward a small stream by the side of a dirt road. There's a fence around it to keep the cattle out. Federal biologists determined this area is critical habitat for the endangered New Mexico jumping mouse, and plants it relies on.

"I understand endangered species, they need to be protected," Stone says. But he says environmentalists have pressured the government to close off areas like this using the Endangered Species Act as a tool to get cattle off the land. That claim is denied by most mainstream environmental groups.

"They want to preserve a jumping mouse and they want to kill an American culture and heritage," Stone says.

In arid New Mexico, the origin of pretty much any fight over the land is water, or what's left of it – it's feared that New Mexico is slipping back into drought. And the story around this fence is complicated. The land Stone stands on is public land. The ranchers don't own it. But they've long argued they do own the rights to the water flowing through it. Those rights were granted by the state before the U.S. Forest Service came into the picture.

"It is a personal property right, that water that's flowing down that creek right there," Stone says. 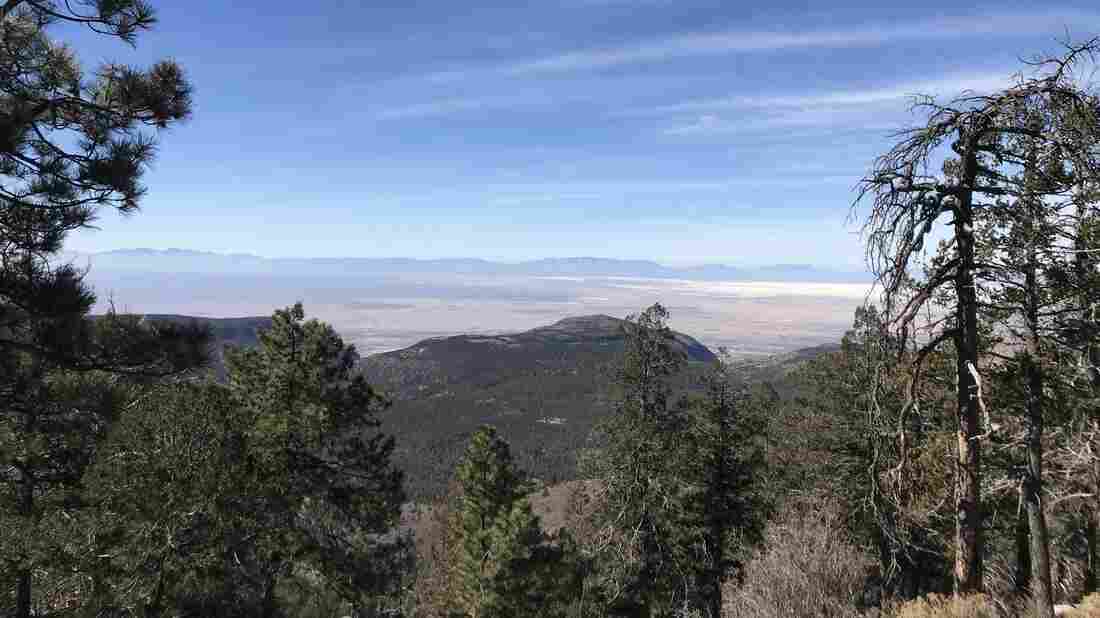 The Sacramento Mountains are seen as an "island in the sky," a refuge of forest land in the otherwise harsh southern New Mexico desert. Kirk Siegler/NPR hide caption 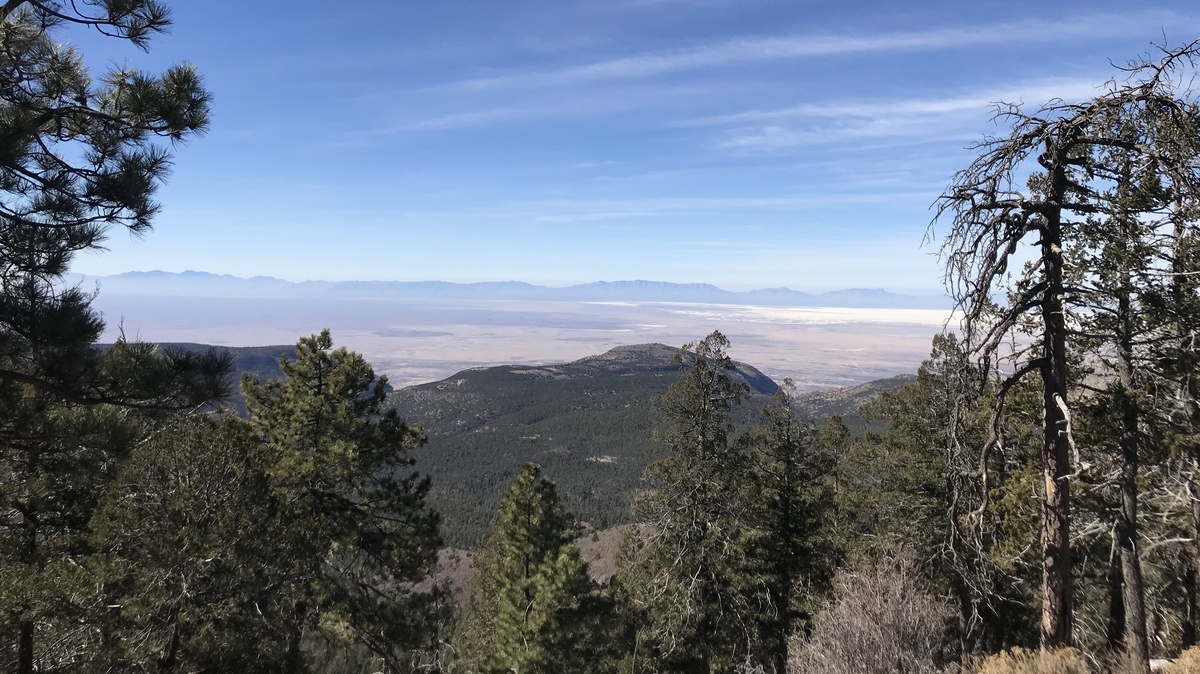 The Sacramento Mountains are seen as an "island in the sky," a refuge of forest land in the otherwise harsh southern New Mexico desert.

The cattle mostly couldn't get to the water. Things got tense. This was around the same time that government agents had squared off with militia supporters of Cliven Bundy in an unsuccessful attempt to round up the family's cows that were grazing without permits on federal land.

But in southern New Mexico, the ranchers got together and decided to take a very different course: the courts. They believed the law was on their side, and alleged in federal court that the government violated constitutional rights by not compensating them after their property was condemned.

At one point, Gary Stone recalls having to turn away supporters of the Bundys. Some had even offered to come in with bulldozers and tear the fences down.

"We have not allowed that, because we don't want to go to guns," Stone says.

Late last year, a federal judge sided with the ranchers. And the drama started to die down.

"We can agree to disagree, but I think we all recognize coming to the table to work things through is still the best way to deal with things," says Travis Moseley, forest supervisor on the Lincoln National Forest.

In an interview, Moseley repeatedly stressed it's his job to manage the land for all kinds of uses — not just grazing. In recent years, forests like this have also experienced explosive growth in visitation and specifically recreation — hunting, camping, off-road vehicle travel has also come into conflict with ranching. All these pressures have further strained wildlife and habitat and water.

"If you think about water and drought in the West, our cities are growing, and those are the same waters that are needed for livestock operators and recreational uses," Moseley says.

Hearing Moseley describe all the pressures, it's hard not to predict that public land fights are only going to get worse. Even though a standoff was averted in New Mexico, in some corners of the rural West, tensions between cattlemen and federal land managers are as strained as they've ever been. This is still the case under President Trump, whose campaign promises got a warm reception among many farmers and ranchers.

Some New Mexico conservation groups say public lands are being turned into a proxy, or lighting rod, for a lot of the economic angst being felt in rural America right now. For his part, Travis Moseley mostly downplays the tension. He says the drama around the Bundys — and the standoffs in Nevada and Oregon — get a lot of media attention. But he doesn't think they're representative of most ranchers.

"Getting to that point where there's essentially a standoff is a fairly unique situation and not repeated very much at all," Moseley says.

Indeed, armed confrontations are extremely rare, despite all the attention of late. Across the West, literally only a handful of ranchers are in defiance of federal orders to pay their grazing permit fees. And that's out of about 20,000 permittees operating on U.S. Forest Service and Bureau of Land Management lands. 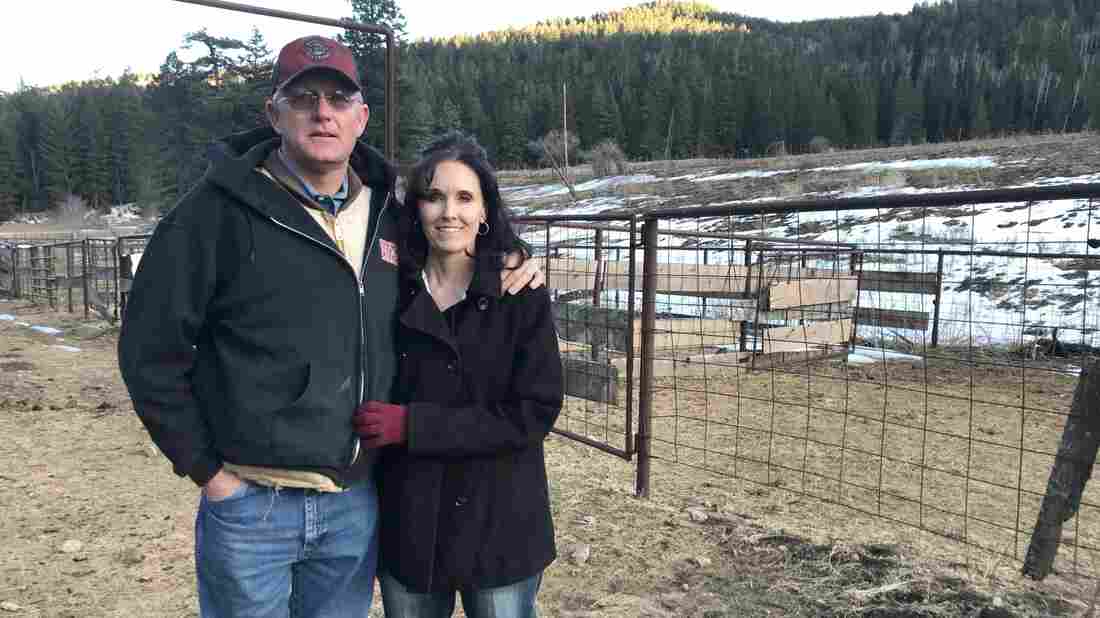 Spike and Kelly Goss worry ranchers are being squeezed off public land in the West. Kirk Siegler/NPR hide caption 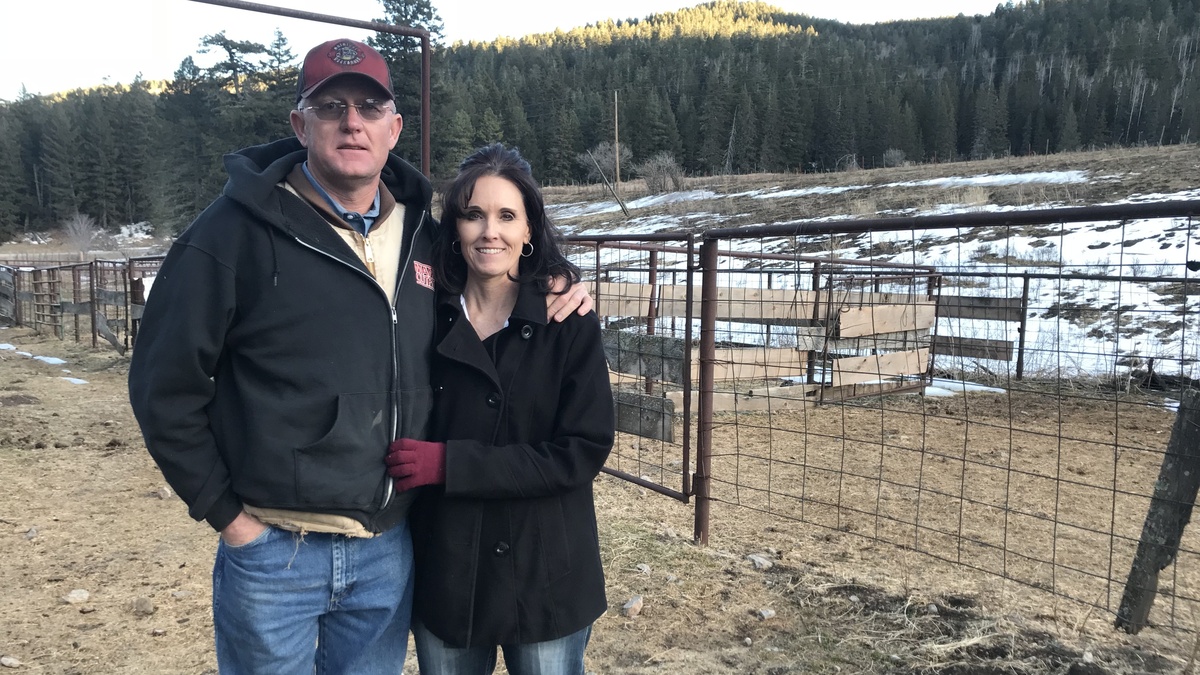 Spike and Kelly Goss worry ranchers are being squeezed off public land in the West.

Here on the Lincoln National Forest, all 74 permit holders are in good standing. But count at least one of those, maybe more, as a reluctant holder.

"We have never not signed our permit," says Spike Goss. "But we have always signed it under protest, at least for the last twenty years or so."

Spike and his wife Kelly and their cattle company the Sacramento Grazing Association first brought that lawsuit over the fencing around the water sources back in 2004. One frigid evening, while checking on one of their largest corrals, the couple said they feel somewhat vindicated. But there could be appeals.

"We just aren't going to resort to violence," Kelly Goss says. "As important as these issues are, and as much as we're going to keep fighting for them, we're going to fight through the courts."

Like in much of the Southwest, vast tracts of range land here are owned by the federal government. Many ranchers depend heavily on their federal grazing allotments, which tend to be passed down through generations.

"You do own something, you know," Kelly says. "We don't own the dirt, but we do own the water rights and the forage rights and you pay for that."

Ranchers pay modest permit fees to graze livestock on federal land. But most, like the Goss Family, have tens of thousands of dollars — and decades of use — tied up in their business and infrastructure out here.

"You can't just walk away from it, it's our livelihood and it's what we want to pass down to our kids," Kelly says.

How much compensation the family is owed by the government in the case has yet to be ironed out. But even if they were relocated, it's not clear where they'd go. Private ranch land is considered mostly out of reach these days in the West for independent cattlemen.

Spike and Kelly Goss worry they could soon be squeezed off the land.

"There is a tipping point," Kelly says. "I don't want to judge the Bundys or any of those other situations because at some point there is that tipping point where you can only take so much push back from the federal government."