Accessibility links
A Debut Author Imagines Herself Into Other Lives In 'Asymmetry' Lisa Halliday's new novel is made of stories that seem to have little to do with each other — partly autobiographical, and partly about lives and cultures that are far from her own. 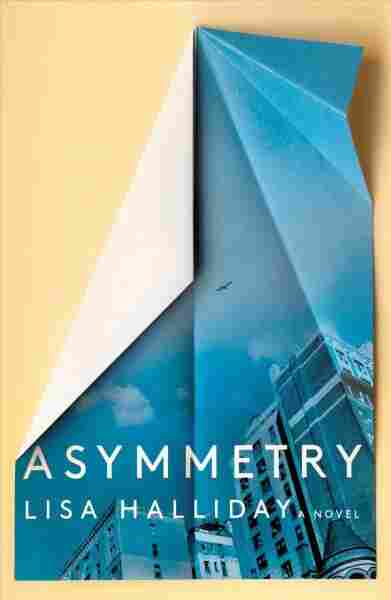 Asymmetry is a book whose title tells the tale: It's made up of two disparate stories with no apparent connection, and a third story that just hints at the link between the two. Debut author Lisa Halliday won the prestigious Whiting Award for her work — and while you may not have heard of her, you probably have heard of Colson Whitehead, Jeffrey Eugenides, Alice McDermott and Jonathan Franzen, all of whom are fellow Whiting winners

Whiting literary director Courtney Hodell says the award focuses on a certain kind of book: "Risky, adventurous important writing that's happening right now in America." Hodell says Asymmetry fits this mold perfectly. Readers may be drawn in by the two main stories, without immediately understanding how they form a novel. The first is a May-December love story set in New York; the second, a tale of displacement and war told by an Iraqi American who's been detained by authorities in London's Heathrow airport.

"They're not even parallel stories," Hodell says. "They're kind of going off at an angle from each other, these two main story lines. But she delicately and subtly creates these little tremors of meaning between them. But I think the fact that you have to figure out what you think she's saying makes the books stay with you."

"I like to think of the book as more of an impressionist novel," says Halliday. She's less concerned with the way her stories connect, and more interested in the book's themes — which she describes as a series of dichotomies: "Old versus young, east versus west, power versus those who don't have quite so much power, justice and the unjust."

The book begins when Alice, a young editorial assistant in the publishing business meets Ezra, a famous writer. He sits down next to her as she's trying to read a book. They slip into a romance that is both sweet and complicated. They banter back and forth and share a love of baseball and reading. He helps her out financially. She runs errands for him, and begins to understand what it means to be a writer.

"I wanted Alice's literary education, her sentimental education to be with someone whose stature was about as big as it could be, so that's how and why we have Ezra. There's also the inherent drama of their age difference, because they do come to feel genuine affection for each other. And when someone is so much older, nature is bound to subtract one of them from the world a lot sooner."

Halliday herself had a romance in her 20s with a famous older writer — Philip Roth. And while she may have drawn on that experience in Asymmetry, she insists Alice and Ezra are works of fiction just like Amar, the Iraqi American economist who is the main character in the second story. En route to see his brother in iraq, Amar is detained at Heathrow airport. The story of his life unfolds as he ponders his past and future. If Halliday's first story seems autobiographical, this one seems quite the opposite.

In order not to be trapped inside our one personhood, we have to try to imagine what it's like to be other people.

Not so, says the author: "In fact, in many ways Amar is more like I am than any of the other characters in the book. He's closer in temperament. His consciousness is very similar to my own, his ideas, his opinions. So it just goes to show while the first half may seem to be autobiographical, the second half in many, many ways is closer to Lisa Halliday than the first."

One of the themes Halliday explores in this book is the nature of writing itself. She pushes back against the idea that a writer cannot write about a character of another culture, and in the process, she takes on one of the most politically complicated parts of the world, the Middle East — a place she has never even visited. Imagining lives and worlds unlike your own, she says, is central to the act of creativity.

"One lives life and then dies having only been one person and I find that a difficult condition sometimes," she says. "And that's why imagination and invention and empathy seems to me so important. In order not to be trapped inside our one personhood, we have to try to imagine what it's like to be other people."

Writing, says Halliday, is a challenge that should be taken on with humility — and with the understanding that you might get something wrong. But just because a situation is complicated, she says, doesn't mean you should back away from it.