Accessibility links
Rand Paul Puts Government On Path For Temporary Lapse In Funding At Midnight Senate leaders had hoped to pass the funding bill Thursday but were forced to wait after Sen. Rand Paul, R-Ky., objected. His maneuver makes a temporary lapse in funding basically inevitable. 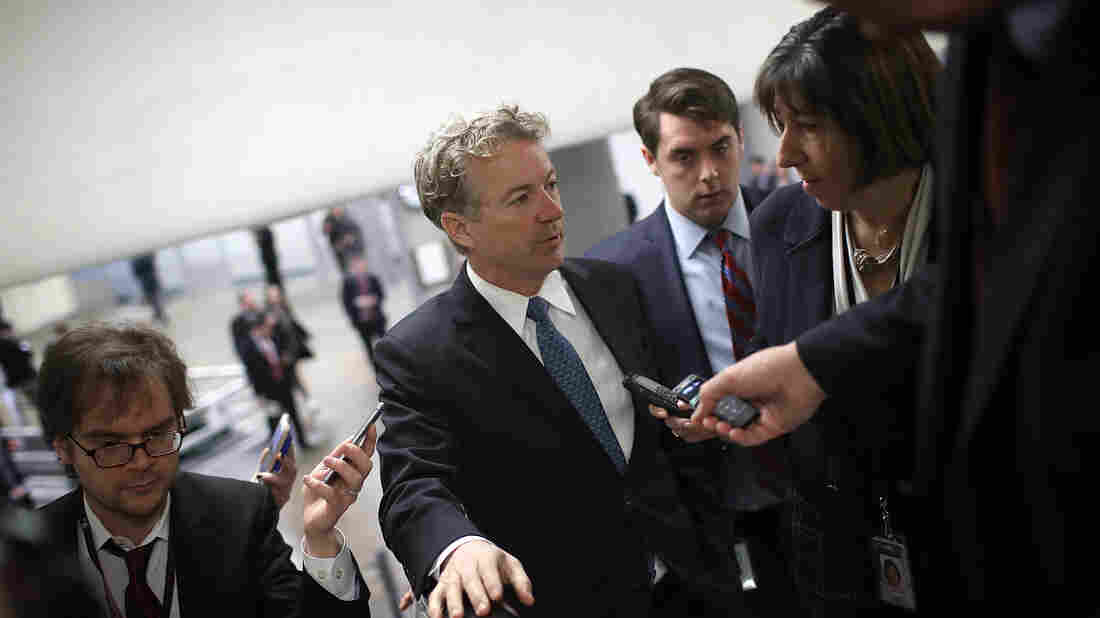 Sen. Rand Paul, R-Ky., speaks with reporters Thursday on his way to a vote on the Senate floor. Win McNamee/Getty Images hide caption 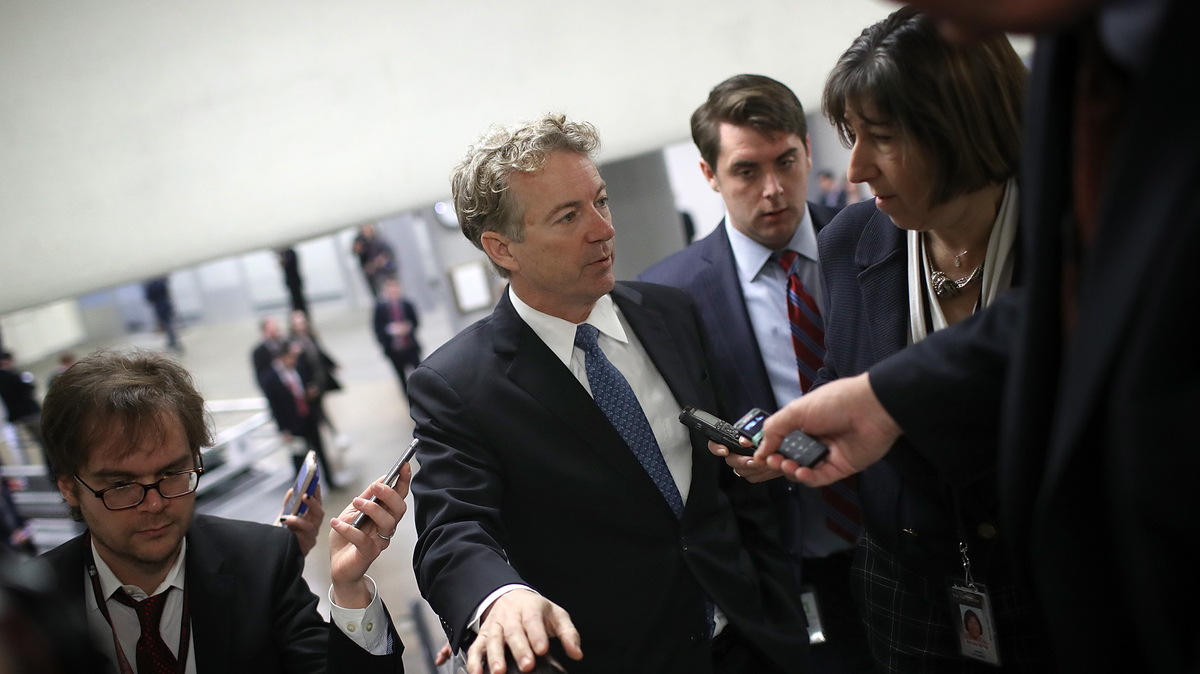 Sen. Rand Paul, R-Ky., speaks with reporters Thursday on his way to a vote on the Senate floor.

It seems all but certain that the nonessential operations of the government could shutter for at least a few hours overnight after Sen. Rand Paul, R-Ky., repeatedly objected to a Senate vote in order to air his grievances over what he calls runaway federal spending.

Paul faced off with Sen. John Cornyn, R-Texas, the Senate majority whip, just after 10 p.m. on the Senate floor and blocked multiple attempts by Cornyn to hold a vote on funding legislation before 1 a.m. Friday.

Even apart from that, Republicans and Democrats are still at odds over spending levels and immigration in the bipartisan budget agreement, and while the bill is likely to pass the Senate, its future in the House remains in limbo.

Senate Budget Deal Would Give A Boost To Health Programs

Given Paul's objections, the Senate is not set to vote on the spending compromise until roughly 3 a.m. Friday. And the House is set to vote somewhere between 3 a.m. and 6 a.m., according to guidance from the House majority whip's office.

Optimism about the $300 billion, two-year budget agreement began to falter earlier Thursday as some House Democrats threatened to vote against the bill because it does not address immigration. Some conservatives are also threatening to vote against the measure because it would increase spending and add billions to the deficit.

Senate leaders had hoped to pass the bill early in the day but were forced to wait after Paul objected to the plan. The Kentucky Republican said Thursday evening he planned to force the Senate to wait until the early hours of Friday morning — after the midnight deadline when funding expires — when debate time would expire and the Senate would be allowed to override his objection.

Paul took to the Senate floor Thursday evening, armed with charts and graphs that pointed to what he says is wasteful government spending.

"I just can't, in all honestly, look the other way just because my party is now complicit in the deficits," Paul said.

Nevertheless, separate concerns grew in the House as his protest wore on.

A growing number of House Democrats, led by Minority Leader Nancy Pelosi, are threatening to vote against the bill, raising concerns that House leaders may not have the votes to pass the spending bill in that chamber.

"We cannot allow our success in one part of the discussion to diminish our leverage in another," Pelosi said in a letter to Democrats. "Speaker Ryan's refusal to allow a bipartisan process for a DACA proposal demeans the dignity of the House of Representatives. It is also an insult to the American people, who overwhelmingly support the Dreamers."

Joe Crowley, D-N.Y., the chairman of the House Democratic Caucus, said in an interview on All Things Considered Thursday that he also wouldn't vote for the current budget agreement because it doesn't reflect his party's values. Republicans, he said, should be doing more to make overtures to Democrats if they need their votes to keep the government open.

Official position: HFC opposes the caps deal. We support funding our troops, but growing the size of government by 13 percent is not what the voters sent us here to do.

"What I am suggesting is they control the House, the Senate and the presidency. I don't know why, for crying out loud; why they can't actually govern, is beyond me," Crowley lamented. "And the notional idea to blame Democrats in the House when they have the Oval and the majority — it's really incumbent upon them to pass their budget. It's not our responsibility to do that. It's the responsibility of the governing party to do that, and they have failed miserably. We've gone from week to week, or month to month with continuing [resolutions] and that's no way to govern."

House Republicans have always expected that they would need some Democrats to help pass the spending bill, and the growing revolt has sparked serious anxiety that the spending agreement could fail, especially since House Republican leadership appears unsure how many Republicans will vote for the bill. Members of the conservative House Freedom Caucus already announced that their roughly 30 members will vote against the pact.

Rep. Mo Brooks, R-Ala., a member of that fiscally conservative caucus, told All Things Considered Thursday that he is not confident the House has the votes to pass the spending bill and hopes enough House Republicans will oppose the idea "that we're going to spend away our future."

"The problem is the American people have elected so many debt junkies that they're ecstatic with borrowing money today so they can get elected tomorrow [without] worrying about someone paying for it after the elections," Brooks said. "And that's very unfortunate that so many people are putting their self-interest, their elections before their country."

The two factions are angry about dramatically different issues but their combined frustration could be enough to make sure the bill can't pass.

House Democrats huddled for more than an hour Thursday night to decide how they should vote. Members emerged conflicted.

House Democrats are particularly worried that they will lose any leverage on immigration once a spending bill is enacted. Spending bills are among the few areas where Republicans need Democratic votes in the House. Pelosi and other top Democrats say they want to force Republicans to agree to legal protections for DREAMers, including the roughly 700,000 immigrants who are in the U.S. illegally after being brought to the country as children and who are enrolled in the Deferred Action for Childhood Arrivals program.

Democrats decided to take advantage of that leverage and merge immigration talks and spending negotiations after President Trump last September announced his plan to wind down DACA. The program ends on March 5 according to terms set by the administration but is the subject of litigation in the federal courts.

Rep. Luis Gutierrez, D-Ill., says Democrats' power would disappear if the budget bill passes because it would lift the spending pressure created by mandatory budget caps that have forced Congress to revisit spending fights since the caps were enacted in 2011.

"Once you've lifted the caps and you've done this, do you really believe that anybody is going to take us seriously?" Gutierrez asked reporters. "They have decoupled the budgetary process from anything where we needed leverage."

The Congressional Hispanic Caucus officially announced its opposition to the budget bill, with the group urging members to vote against the measure in a statement released Thursday evening. 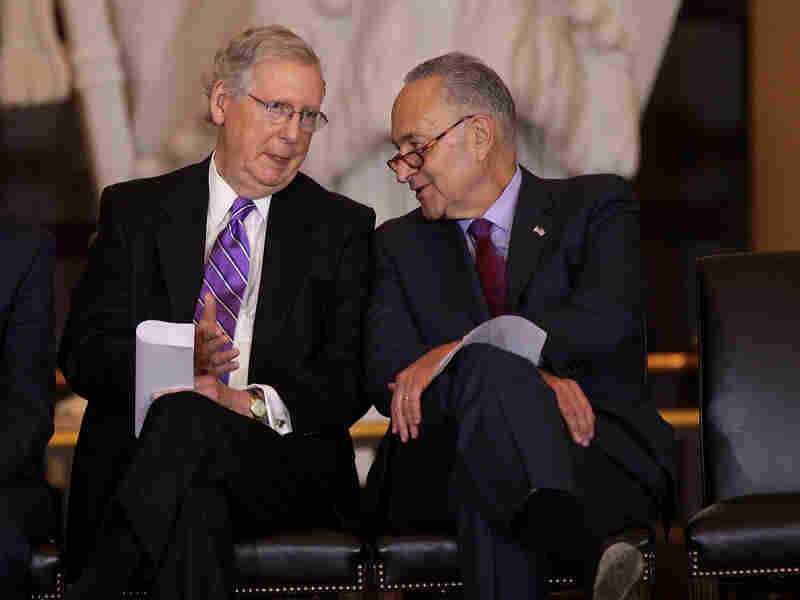 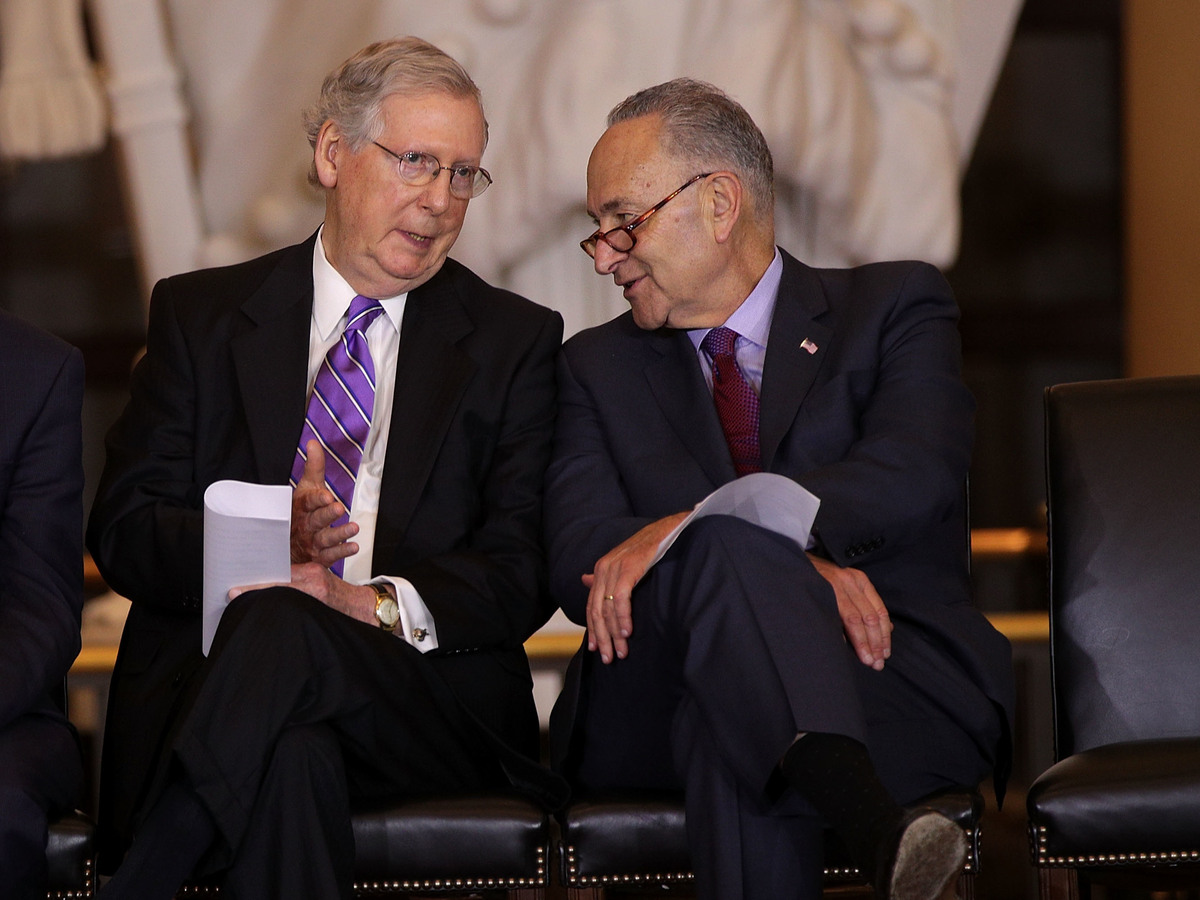 "CHC cannot support this budget caps bill that leaves Dreamers behind," they said. "We stand with nearly 90% of Americans that agree Dreamers should be protected."

An official with the White House's Office of Management and Budget told NPR that OMB is currently preparing for a lapse in appropriations funding for the government. The official also urged Congress to send the funding bill to the president's desk "without delay."

The deal was announced Wednesday as a bipartisan breakthrough that could free Congress from an endless cycle of spending fights.

"No one would suggest it's perfect, but we worked hard to find common ground," McConnell said in a speech announcing the deal.

Schumer echoed the support, saying the agreement would give the federal government certainty after years of bickering.

"This budget deal is a genuine breakthrough," Schumer said, adding the agreement would "break the long cycle of spending crises."

The agreement also has the support of the White House, where press secretary Sarah Huckabee Sanders praised the plan to hike military spending.

"This deal achieves our top priority, a much needed increase in funding for our national defense," Sanders said Wednesday. "The bottom line is that, thanks to President Trump, we can now have the strongest military we have ever had."