Accessibility links
In His First Year As Attorney General, Sessions Transforms Justice In Key Ways In one year, Attorney General Jeff Sessions has managed to transform the Justice Department in the areas of civil rights, immigration and drug policy. 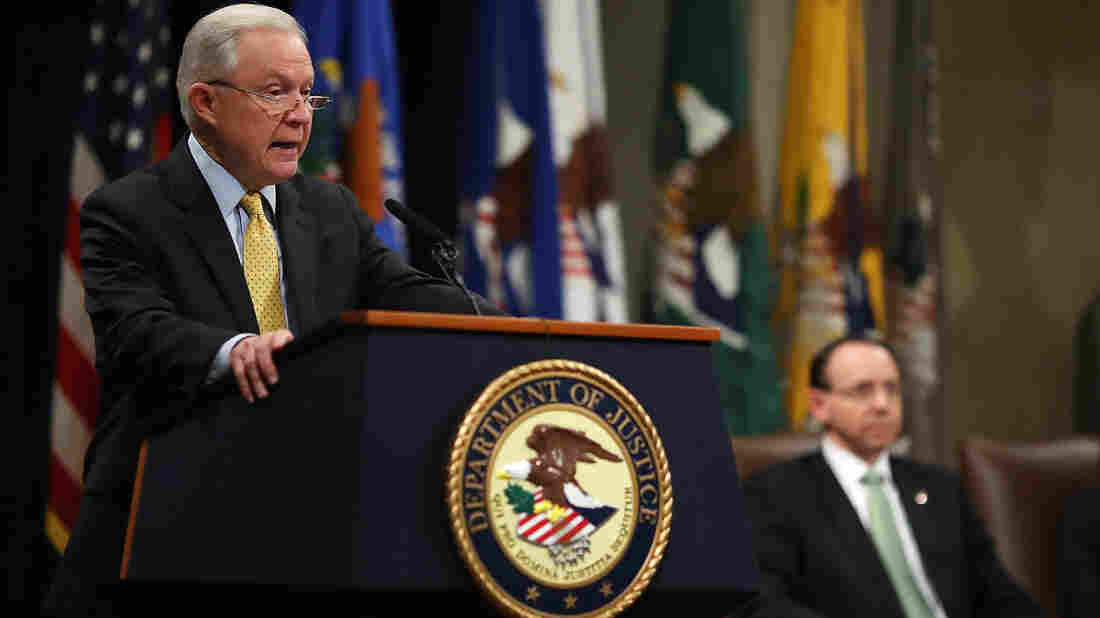 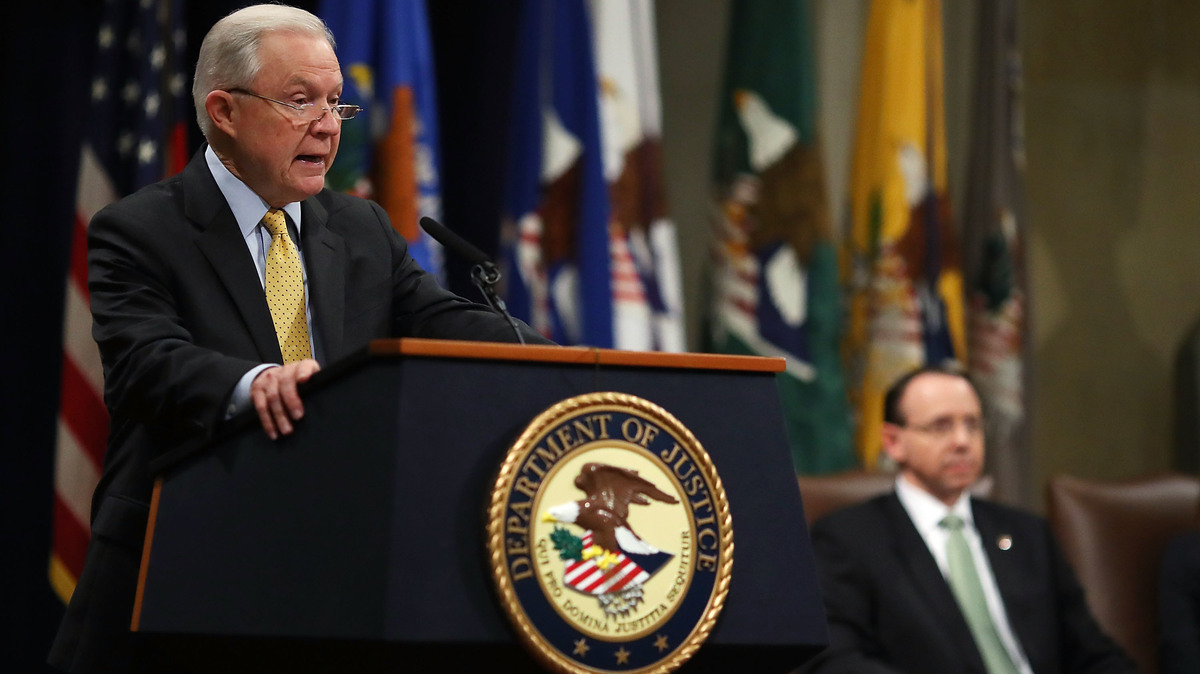 One year ago this week, Jeff Sessions stood beaming in the Oval Office as he awaited his swearing-in as the 84th attorney general of the United States.

On that day last February, President Trump signed executive orders on violent crime and gangs, pledging that a "new era of justice begins." And, in the year that followed, Sessions has managed to transform the Justice Department, particularly in the areas of civil rights, immigration and drugs.

Those policy initiatives have advanced despite an increasingly turbulent relationship among the president, Sessions and the institution he leads. Trump disavowed his attorney general over his recusal last year in the Russia investigation, and he has repeatedly attacked the Justice Department and the FBI as inept or politically motivated.

For his part, Sessions has tried to have it both ways. He has offered a few words of praise for his deputies at Justice, but told an audience this week that he knows there are sharp critics of his department.

"I'll be the first to acknowledge that we still have work to do," he said. "Sunlight truly is the best disinfectant. We will not ignore these problems or hide our heads in the sand."

A few weeks into the job, Sessions rescinded guidance for schools that was designed to protect transgender students in bathrooms and locker rooms. Later, the Justice Department filed legal briefs arguing that a landmark 1964 civil rights law did not bar discrimination on the basis of sexual orientation and sided with a cake shop owner who refused to make a wedding cake for a same-sex couple.

Sessions switched positions in a major voting rights case in Texas, backing away from an argument that state lawmakers had intended to discriminate on the basis of race in their voter ID bill.

And he ordered a review of the Justice Department's approach to consent decrees with errant police departments, ultimately determining that his civil rights unit will turn away from investigating patterns of excessive force and racial profiling by local law enforcement and instead focus resources on prosecuting individual police officers who break the law.

Last fall, the attorney general also put an end to a collaborative reform process some police departments used to identify problems and get advice about how to fix them. In California, the state attorney general recently agreed to monitor how the San Francisco Police Department was ushering in changes recommended through the old DOJ program, since the federal government had backed off.

As a senator, Sessions became the leading voice in Congress for restrictive immigration policies. And in his post as the top federal law enforcement officer, Sessions has continued to advance those goals, often with the immense power of the executive branch behind him.

The attorney general has issued new priorities for immigration judges in an effort to reduce heavy backlogs in those courts. He has promised to hire dozens more judges and monitor their efficiency through what he describes as "benchmarks." He has begun to crack down on immigrants who become naturalized citizens through fraud, moving to strip those people of their citizenship in court. And he has threatened to withhold U.S. grant dollars from "sanctuary city" jurisdictions that don't share information with federal immigration authorities.

Under Sessions' watch, the Justice Department also determined that the Deferred Action for Childhood Arrivals (DACA) program was "an unconstitutional exercise of authority by the executive branch" and could not be defended in a court challenge by Texas and other states.

Early in his tenure, Sessions revoked an Obama-era memo that directed federal prosecutors to use discretion in making decisions about charges in drug cases. In its place, the attorney general ordered U.S. attorneys to charge the most serious, readily provable offense — a policy that could lead to more and longer prison terms for drug criminals.

Sessions also reversed course and announced that the Justice Department will continue to make use of private prison facilities, rather than phase out those contracts.

Last month, Sessions withdrew a memo that set priorities for prosecutors in states where marijuana had been legalized for recreational or medical purposes. Long a foe of marijuana usage, the attorney general pointed out that the drug remains illegal under the federal Controlled Substances Act. His decision to get rid of the Obama memo, without issuing his own priorities, has created some confusion about whether the law will be enforced differently in different states.

Sessions explained himself at an event this week honoring former President Ronald Reagan and the people who worked for him. "We don't think illegal drug use is 'recreation,' " the attorney general said. "Lax enforcement, permissive rhetoric and the media have undermined the essential need to say no to drug use — don't start."