Accessibility links
Ice Age Forest Long Buried In Gulf of Mexico Offers Climate Change Clues The remarkable discovery of an intact ancient cypress forest in the Gulf of Mexico may reveal a lot about climate change — the past and the future. 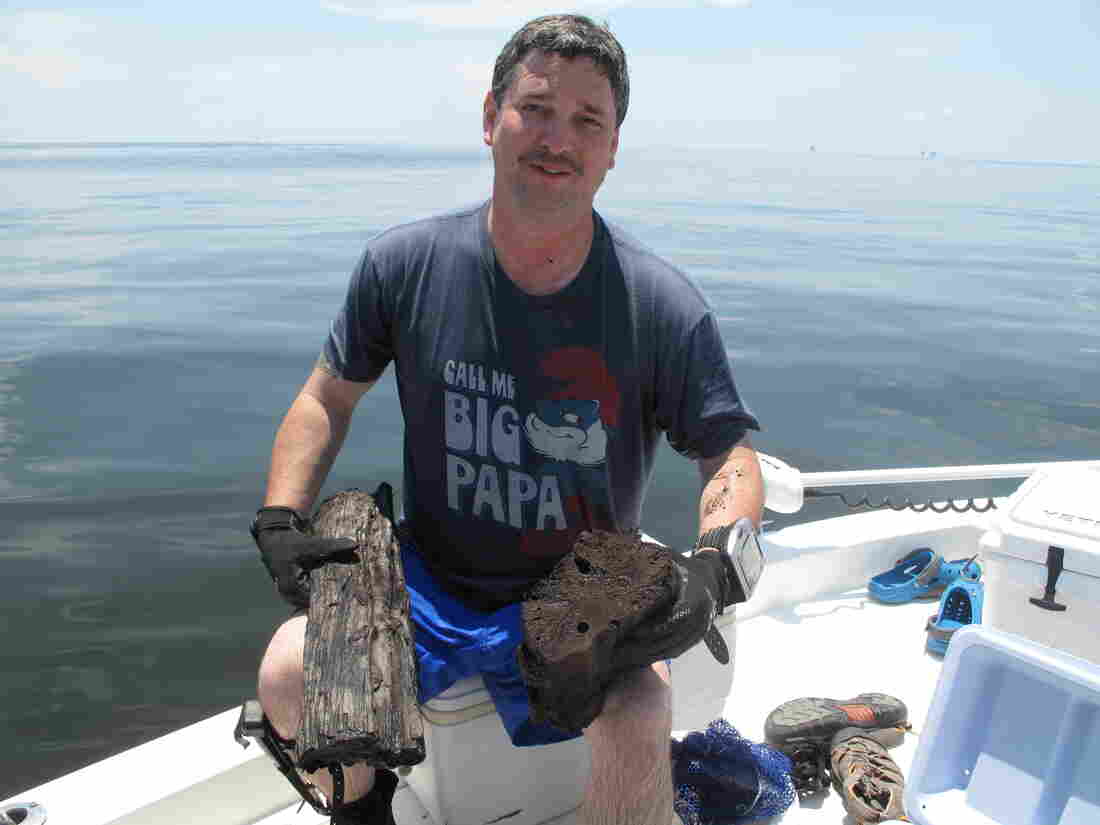 Ben Raines, an environmental reporter for AL.com, holds pieces of wood he collected from a cypress forest discovered in the depths of the Gulf of Mexico. A scientist says having an intact forest from the ice age is rare. Debbie Elliott/NPR hide caption 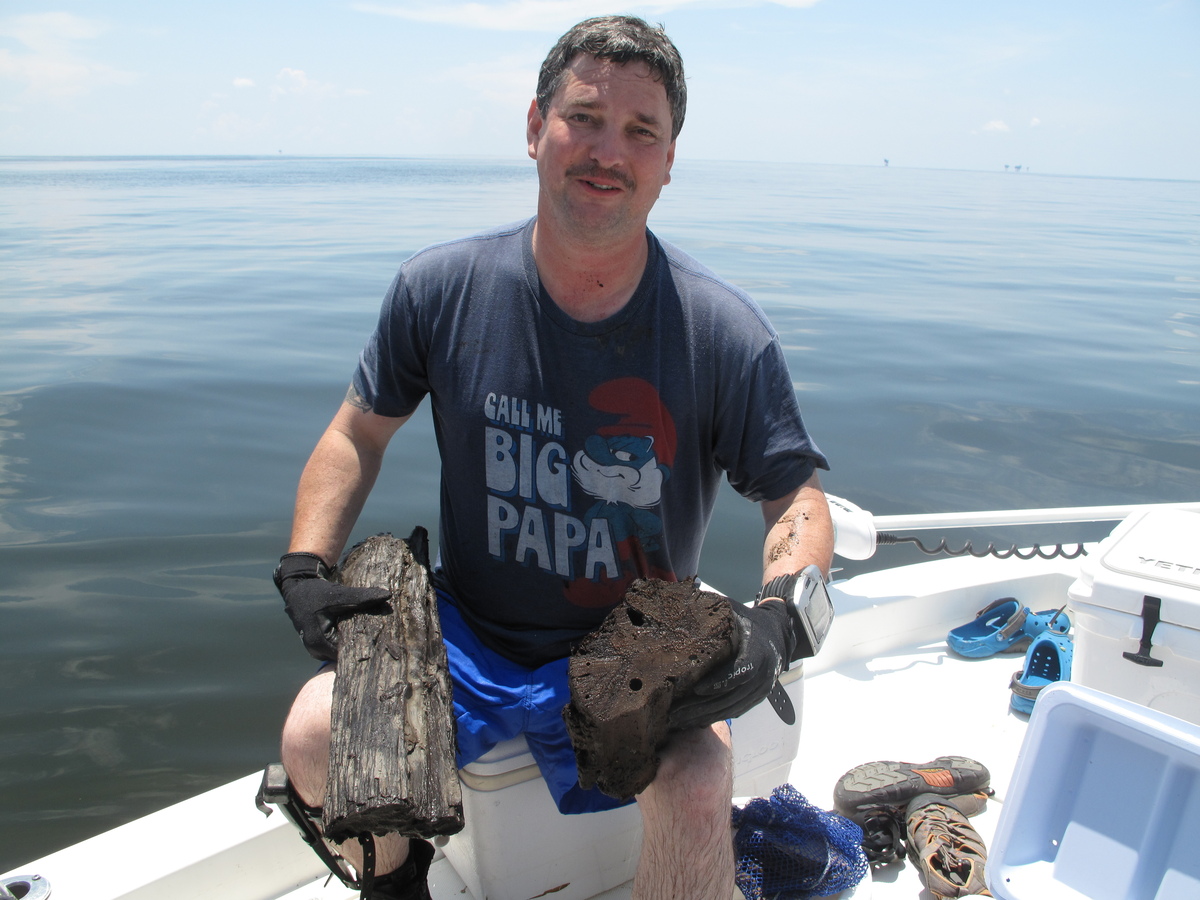 Ben Raines, an environmental reporter for AL.com, holds pieces of wood he collected from a cypress forest discovered in the depths of the Gulf of Mexico. A scientist says having an intact forest from the ice age is rare.

About 10 miles off the Alabama coast, Ben Raines gently falls backward from a boat into the Gulf of Mexico, a scuba tank strapped to his back and handsaw on his belt. He's on a mission to collect cypress samples from 60 feet below.

"We're going to cut some pieces as if we were in a forest on land," says Raines, an environmental reporter with AL.com.

A fellow diver first brought Raines here after a local fisherman discovered the site. He had hit a sweet red snapper spot that spread over a wider area than the artificial reefs and sunken ships where anglers typically find fish. When divers explored further, they found a half-mile stretch of stumps running along a trench that was likely once a river bed.

"It's just a forest transplanted to the bottom of the ocean," Raines says.

It reminds him of the swampy forests in the river delta above Mobile Bay.

"The placement of the trees, how far apart they are and everything, as you're swimming, is just like in a forest," Raines says. They're about 5 feet apart. And you'll see the knees around the cypress."

Scientists say it's a remarkable discovery.

"The underwater forest is like the Garden of Eden underwater," says Kristine DeLong, a paleo-climatologist at Louisiana State University. She says tests date the forest to be between 50,000 and 70,000 years old.

"It's a huge deal," DeLong says. "Because here we have this like perfectly preserved time capsule of an ice age forest."

Most forests from that time period were bulldozed by ice sheets, or flooded by melting glaciers, she says, so having an intact forest like this is rare.

The theory is that it was buried in mud and sand and protected until waves from a powerful hurricane uncovered it in 2004. Now scientists are trying to learn more before the wood deteriorates from exposure to the salt water.

DeLong says they're looking at pollen, seeds and insects found in sediment cores taken from the site. And they're learning what happens during periods of climate change.

"We know during the ice age we get these really rapid fluctuations and sea level rise," DeLong says. "And that's very similar to what the coastline is experiencing today — we're going through rapid sea level rise. So what happens to these forest ecosystems?"

She says the information could be useful to Gulf states like Louisiana, dealing with a coastal land loss crisis.

She says students often ask her if she believes in climate change.

"And I'm like yeah," she says. "It's like I'm sitting on a boat 10 miles offshore with 5-foot diameter tree stumps underneath me. The only way that happens is climate change."

Out on the Gulf, Ben Raines is back from his dive with a wet and muddy chunk of wood he heaves onto the boat deck.

"You can see the grain in the wood, and it's hard as a rock," he says, rapping his knuckles on the piece of cypress and pointing out holes in the tree trunk, likely tunneled by ancient beetles or worms. "It's like you just cut it down in the forest." 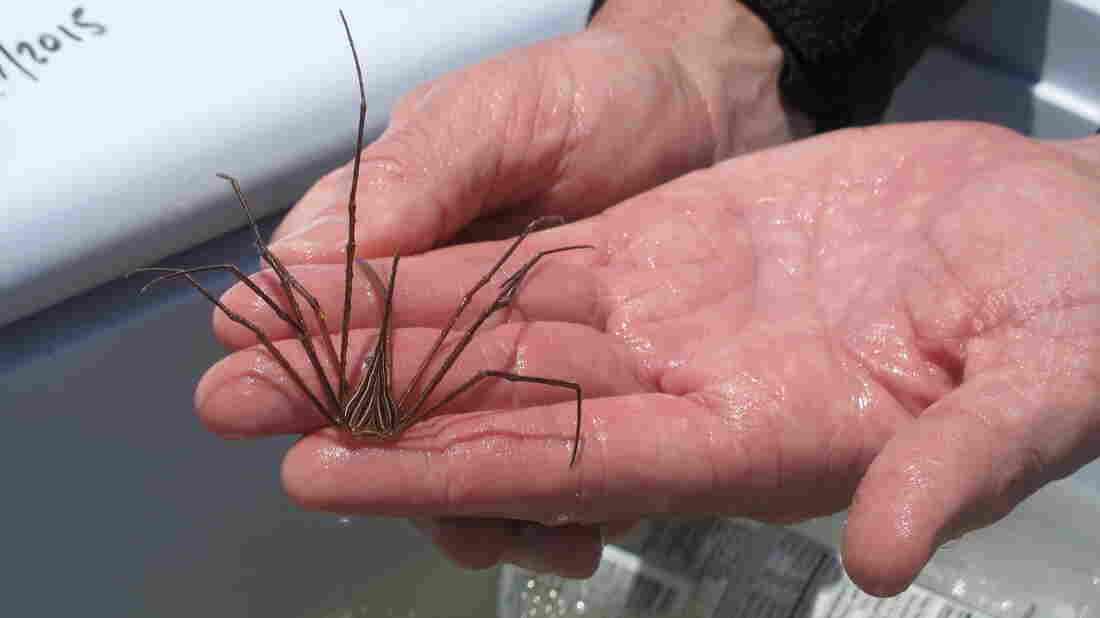 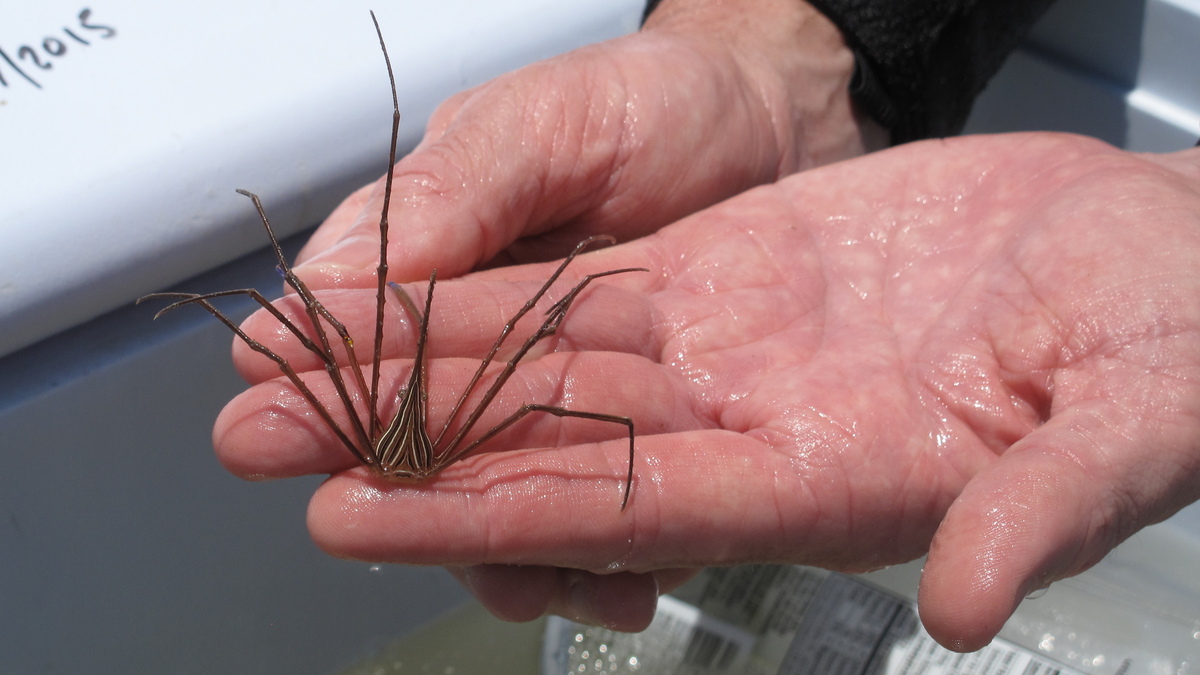 Aquarist Brian Jones caught this arrow crab while collecting specimens from the underwater forest for a new display at the Dauphin Island Sea Lab Estuarium.

Marine scientist Brian Jones is also on this dive and comes up with fish in his net.

He's collecting specimens to include in a display about the underwater forest at the Dauphin Island Sea Lab on the Alabama coast.

His net yields a belted sandfish, a band tail puffer and an arrow crab, a creature that looks more like a praying mantis than a crustacean.

"It's got really long, skinny legs," Jones says. "They like to live around rocks and structure and sunken forests."

Jones also brought up sponges and anemones that had burrowed into the old wood. He says the northern Gulf floor for the most part is flat and sandy, so finding an area like this with the kind of sea life you might find on a coral reef is a treat – one that he will try to re-create in an aquarium.

"Hopefully by putting some of the wood, and some of these animals on display, we can really tell the story," Jones says. "It captivates people — being able to touch one of these pieces of wood and actually see the fish and crabs that live there will be really special."

Ben Raines has produced a documentary about the underwater forest, and he is working to have the site declared a national marine sanctuary.

"It's like any of our national treasures," says Raines. "You know you can go to the Grand Canyon or whatever. That's what this is. This is a natural wonder. And it really ought to get to stay here rather than be turned into coffee tables and electric guitars."

Raines says salvage companies have already been calling trying to get the GPS coordinates for the site, hoping to harvest the bald cypress wood.