Accessibility links
New Oral History Captures The Magic Of 'Angels In America' Authors Isaac Butler and Dan Kois celebrate Angels in a new book, The World Only Spins Forward, that collects the memories of everyone from playwright Tony Kushner to former Rep. Barney Frank. 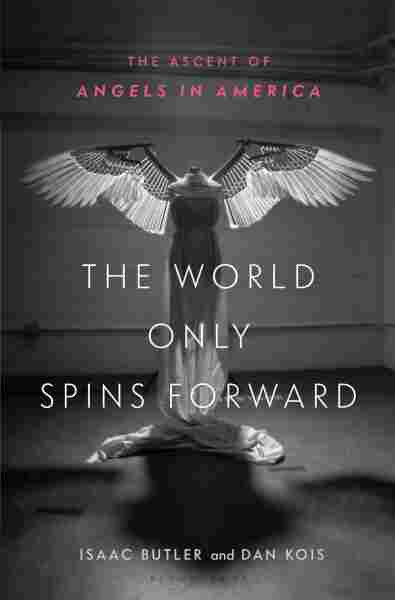 The World Only Spins Forward

The Ascent of Angels in America

by Isaac Butler and Dan Kois

By the time Angels In America got to Broadway in 1993, after workshops, a pair of west-coast stagings, and an ecstatically received London production, it played like the smash audiences had heard it was.

Playwright Tony Kushner had created what he called a "gay fantasia on national themes," a two-part, six-plus-hours theater event that explored the AIDS era with characters real and fictional, in sometimes hallucinatory situations that were seriously out-there. A winged angel flew in at the end of the first half, and that was after the action had leapt from Manhattan to Salt Lake City to Antarctica.

Imagine the actors' reactions at that first read-through. Actually, you don't have to imagine because in their oral history The World Only Spins Forward, authors Isaac Butler and Dan Kois got them to talk about it.

Actress Lori Holt, for instance, who played the Valium-popping wife of a gay Republican Mormon in one of the earliest Angels workshops at San Francisco's Eureka Theater Company, read her journal entries to the authors.

"I wrote in my journal, December of '88: 'The script is outrageously long, the first part alone is 200 pages plus.'"

Two hundred pages-plus of laughter, fury, anguish, poetry, drag queens, closeted lawyers, Mormons, and — especially — politics. And that was just the first half. Today, the plays are a known quantity, having won a Pulitzer Prize, inspired a multi-part HBO adaptation, and having been produced, published, and taught the world over for 25 years. But in the early 1990s, there was a very real question as to whether an audience would even get it. No one knew for sure. Including, the authors discovered, the playwright.

"Opening night, which is critics night," Kushner told them, "is like performing at a stenographer's convention. Nobody laughs. It's horrible. And then they all go home and write their reviews, and the reviews come out."

Opening night, which is critics night, is like performing at a stenographer's convention. Nobody laughs. It's horrible.

He's talking here about the first London production, before there was any talk about bringing Angels to New York. He and director Declan Donnellan had disagreed strenuously about the staging. Emotions were running high, and the director told the cast he didn't want anyone to read the reviews. They were all going to meet up at a bar — and actors being actors, one went to a newsstand on the way to the bar and arrived with an armload of newspapers. Once they'd been plunked on a table, Donnelan forgot all about his instructions and started reading them aloud, sight unseen.

"Tony was sort of shriveling on the other side of the table," Donnellan recalls. "And I read all these reviews, and they were all total raves. And then I realized what an awful, risky thing I'd done." '

The book weaves together this sort of in-the-moment remembrance with the reactions of everyone from critics, to gay former Rep. Barney Frank. Its oral history consists of a sort of tapestry of snippets from almost 250 interviews, arranged in chapters that deal with the show's development, its casting, its reception, and its legacy. The point is not just to show how this play found its voice, but also to place it in context. Angels was a product of, and was dramatizing, a moment when the purple splotch of Kaposi's Sarcoma — evidence of a compromised immune system — amounted to a death sentence.

One of the play's more telling scenes finds Prior and Lewis — the central gay couple played by Stephen Spinella and Joe Mantello in the original Broadway production — coming to terms with that fact. Prior shows Lewis a splotch on his arm, and Lewis responds, "That is just a burst blood vessel."

"Not according to the best medical authorities," demurs Prior as Lewis dissolves in sobs. "K.S. baby. Lesion number 1, the wine dark kiss of the angel of death, I'm a lesionaire, the foreign lesion. The American lesion. Lesionaire's disease. My troubles are lesion ... Don't you think I'm handling this well? I'm going to die."

Mantello, now celebrated as the director of the smash musical Wicked, is devastated (and devastating) in that scene, which more or less introduced him to audiences. He was, he tells the authors, so unskilled at auditioning that he was "virtually unhireable" before Angels opened on Broadway in 1993.

"It wasn't like a natural progression," he says, "of somebody who had been working a lot off-Broadway. It was really: very few acting jobs ... Angels in America."

Today, the play attracts much bigger names. Celebrated Broadway headliner Nathan Lane will play closeted lawyer/moral monster Roy Cohn in the 25th anniversary Broadway revival, and movie star Andrew Garfield, who not long ago was Hollywood's amazing Spider-Man, will wear "the wine-dark kiss of the angel of death." The book's authors asked Garfield to comment on how his own sexuality affects playing a now-iconic gay character

"I, as far as I know, am a heterosexual male in a heterosexual male's body. And I'm not confused about that. And of course, the responsibility of taking on this role in a seminal play — a seminal gay play — filled me with joy. Because I knew deep down it was going to be fine. But just above that deep down was a layer of terror, of: 'I'm the wrong person for this.'"

The terror is understandable. Though he got good reviews recently in the part in London, he does have big shoes to fill, as have the dozens of other actors who've played the part through the years. Even after a quarter-century, memories of Spinella standing up to AIDS — and an unreliable partner, and the arrival of that problematic angel — remain strong.

An angel whose entrance — she comes crashing through the ceiling, demolishing plaster, cracking a refrigerator, and generally wreaking havoc — is both a staging highlight, and a fraught moment for the tech crew. One actress remembers her wig getting caught in the rigging as she was flying in. And the director came home to a phone message that night from a patron who raved about the moment "when the angel turned upside down screaming, and her wings fell into the audience, and the stage manager came out. It looked so real," he said, "but I knew you'd rehearsed it."

Theater magic. You've got to love it. And Dan Kois and Isaac Butler have captured a lot of it in The World Only Spins Forward.