Accessibility links
After Aides Accused Of Domestic Abuse Resign, Trump Says 'Lives Are Being Shattered' In a tweet, the president said people's lives are being destroyed by "a mere allegation." This week, two White House staffers resigned after reports of domestic violence, which both have denied. 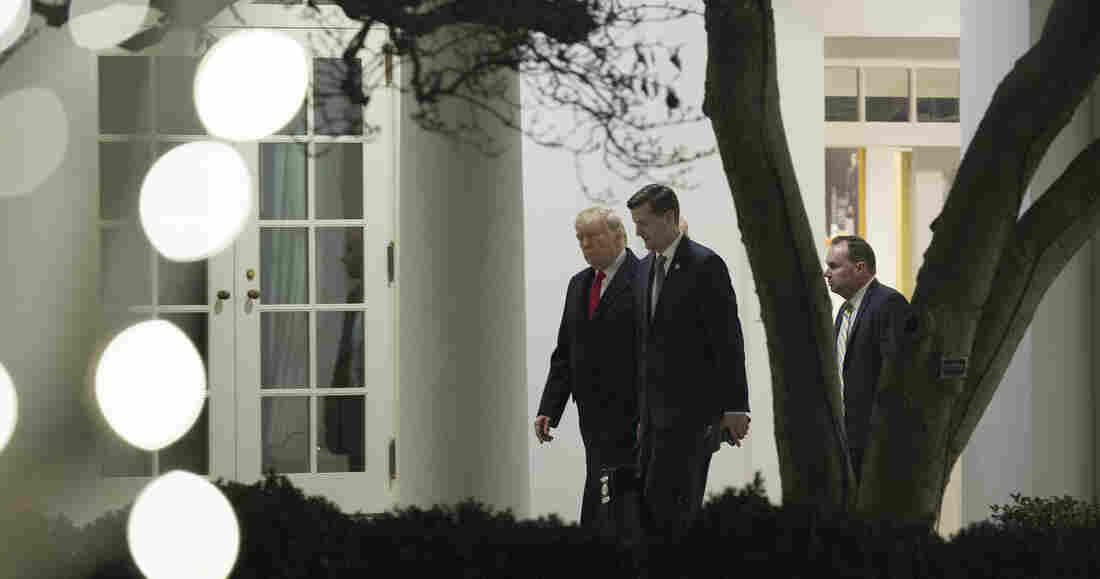 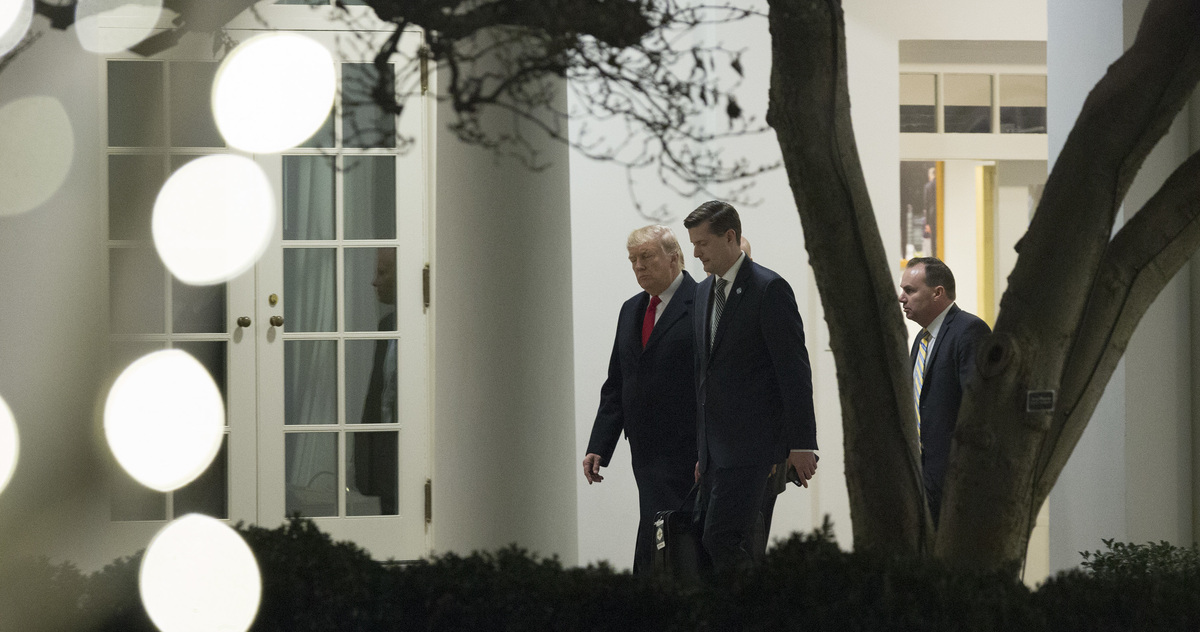 President Trump speaks with White House secretary Rob Porter (center) and Sen. Mike Lee, R-Utah, outside the White House in December. Porter resigned this week amid allegations of domestic violence against his ex-wives.

President Trump appeared to defend two recently resigned members of his staff accused of domestic abuse on Saturday, arguing in a tweet for due process and saying that people's lives are being destroyed by "a mere allegation."

"Peoples [sic] lives are being shattered and destroyed by a mere allegation. Some are true and some are false," Trump posted online. "Some are old and some are new. There is no recovery for someone falsely accused — life and career are gone. Is there no such thing any longer as Due Process?"

The Saturday morning tweet came after Trump said Friday afternoon that he was surprised and saddened by allegations of domestic violence against a top aide, Rob Porter, who resigned this week. Hours later on Friday evening, a White House speechwriter also stepped down amid accusations of domestic abuse.

Trump praised Porter's work as White House staff secretary on Friday and said he hopes the former aide goes on to a successful career elsewhere.

"We wish him well," Trump told reporters during a hastily arranged photo opportunity in the Oval Office.

Trump noted that Porter has denied the allegations of domestic abuse leveled by two of his ex-wives.

"He says he's innocent, and I think you have to remember that," Trump said.

"He totally denies it," Trump said of Moore, even as other Republican leaders called for Moore to step aside. "He says it didn't happen. And, you know, you have to listen to him." The White House had called the allegations "very troubling."

Porter resigned abruptly this week when the allegations of spousal abuse were made public, initially by the Daily Mail. A background check for security clearance was in progress at the time of his resignation.

"Before we were contacted by the media, we learned last night that there were allegations," said principal deputy press secretary Raj Shah. "We immediately confronted the staffer, he denied the allegations and he resigned today."

Sorensen told the Post he stepped down because he "didn't want the White House to have to deal with this distraction."

A White House official told NPR's Tamara Keith that Sorensen's position did not require a security clearance, but that his background check was ongoing. Sorensen was a former top policy adviser to Maine GOP Gov. Paul LePage.

According to the Post, Sorensen's ex-wife "claimed that he was violent and emotionally abusive during their turbulent 2½ -year marriage." However, Sorensen alleges it was his ex-wife, Jessica Corbett, who was abusive toward him.

Corbett claimed that her ex-husband "ran a car over her foot, put out a cigarette on her hand, threw her into a wall and grasped her menacingly by her hair while they were alone on their boat in remote waters off Maine's coast, an incident she said left her fearing for her life." She also provided the Post with text messages and emails in which Sorensen berated her and showed the newspaper a photo of a scar from the alleged cigarette burn.

In a lengthy statement provided to the Post, Sorensen said he had "never committed violence of any kind against any woman in my entire life."

"In fact, I was the victim of repeated physical violence during our marriage, not her," he added, according to the Post, also saying he had consulted with an attorney and was " 'considering legal options to address her defamation.' "

"Sorensen alleged that Corbett punched him on multiple occasions," the Post reported. "Sorensen provided photos of what he said were injuries his ex-wife inflicted upon him during their fights, including bruises and scrapes," the newspaper also reported.

Also according to the Post: "Corbett said several of the incidents involved alcohol and acknowledged that she slapped Sorensen a number of times after he called her a vulgar term."

Sorensen's departure adds to the ongoing headache for the White House and amplifies questions about how thoroughly it not only vets staff but also takes claims of domestic abuse.

At first, White House officials rallied around Porter, who described the allegations as false and "vile claims." But their public support for Porter quickly evaporated once a photo surfaced showing one of his ex-wives with a black eye.

By Thursday morning, Porter had cleaned out his desk near the Oval Office, where he supervised the flow of paperwork to the president. Meanwhile, questions were swirling about how long his White House colleagues had known about the alleged abuse.

Trump said he was not aware of the claims before this week's news reports.

"I found out about it recently and I was surprised by it," the president said. He later added that "it was very sad when we heard about it. And certainly he's also very sad."

Of Porter, Trump said, "It's obviously a tough time for him. He did a very good job when he was in the White House and we hope he has a wonderful career."

Joe Biden responds to Pres. Trump's comments on Rob Porter: "Is there any other crime—and it's a crime—where there'd be an explanation, that the reason why we shouldn't pay attention to the transgression is because they're good at something?" https://t.co/1h9gdwyx57 pic.twitter.com/UPi5NAS3yi

"That's like saying, 'That ax murderer out there, he's a great painter,' " Biden told an audience of fraternity and sorority students in Indianapolis. "Is there any other crime — and it's a crime — where there would be an explanation that the reason why we shouldn't pay attention to the transgression is because they're good at something?"

Vice President Pence also seemed to draw a tougher line against the former staff secretary than Trump did, telling NBC's Nightly News that he was "appalled" by the allegations against Porter.

"There's no tolerance in this White House, and no place in America for domestic abuse," Pence said in an interview with Lester Holt.