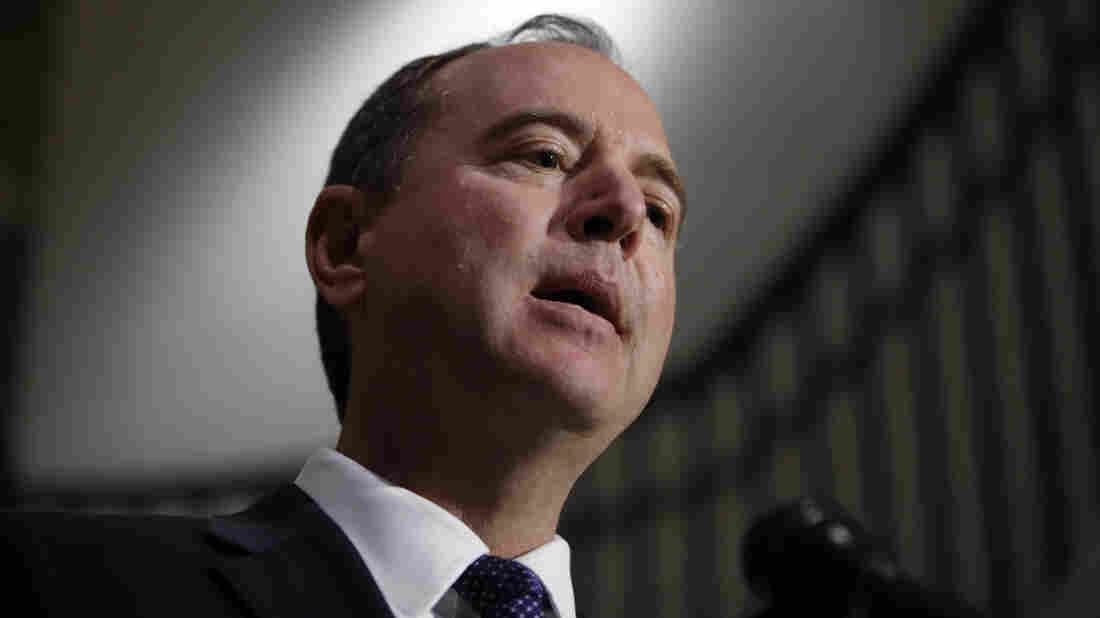 Rep. Adam Schiff, D-Calif., ranking member of the House intelligence committee, speaks during a media availability after a closed-door meeting of the committee on Monday. Alex Brandon/AP hide caption 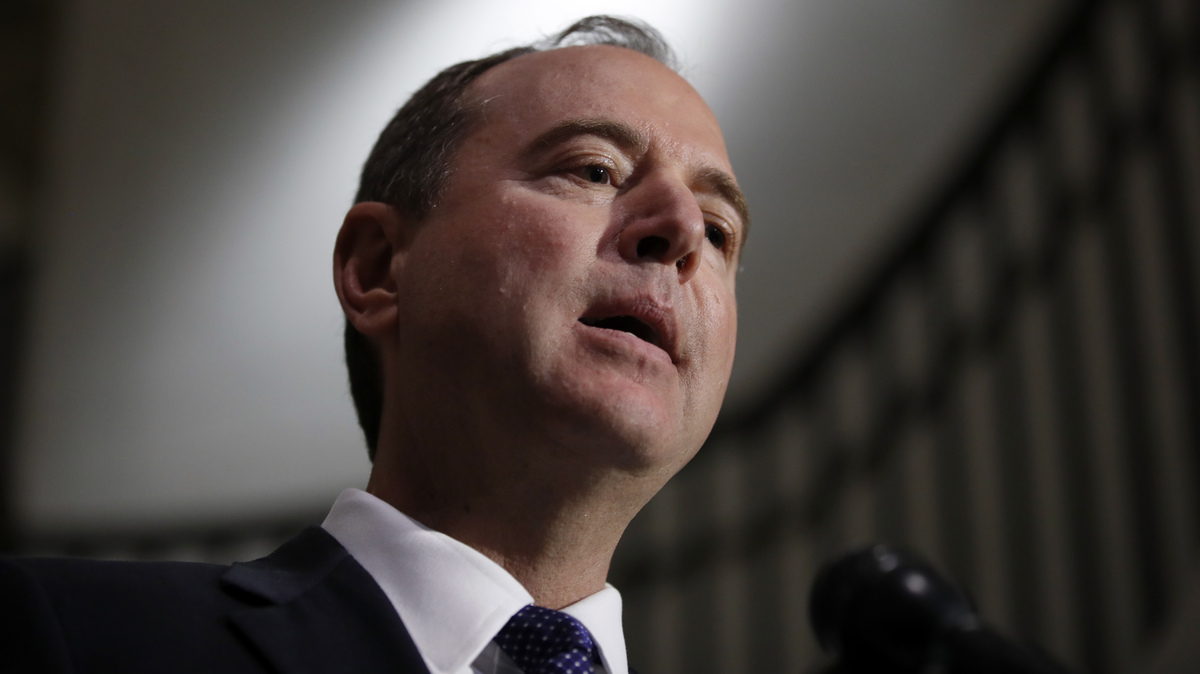 Rep. Adam Schiff, D-Calif., ranking member of the House intelligence committee, speaks during a media availability after a closed-door meeting of the committee on Monday.

President Trump will not immediately release a memo drafted by Democrats on the House intelligence committee intended to respond to a memo by that committee's Republican chairman released last week, with the White House instead suggesting revisions of sensitive sections before it is made available to the public.

"Although the President is inclined to declassify the February 5th [Democratic] Memorandum, because the Memorandum contains numerous properly classified and especially sensitive passages, he is unable to do so at this time," White House counsel Don McGahn wrote in a letter Friday to Rep. Devin Nunes, R-Calif., chair of the House intelligence committee. "However, given the public interest in transparency in these unprecedented circumstances, the President has directed that Justice Department personnel be available to give technical assistance to the Committee, should the Committee wish to revise the February 5th Memorandum to mitigate the risks identified by the Department."

"The Executive Branch stands ready to review any subsequent draft of the February 5th Memorandum for declassification at the earliest opportunity," McGahn also wrote in the letter.

The Democratic countermemo, authored by the committee's ranking member Adam Schiff, D-Calif., was drafted in response to the Nunes memo, which contends that officials at the Department of Justice and the FBI abused their authority in authorizing surveillance on former Trump campaign foreign policy adviser Carter Page.

The Nunes memo is four pages long. People who have read the Schiff memo told NPR's Philip Ewing that it is 10 pages and contains many footnotes intended to rebut arguments made in the GOP document.

On Saturday morning, Trump tweeted about the back-and-forth, implying Democrats purposefully filled their memo with details that would need redaction so they could then turn around and blame him when he declined to declassify and release it as originally drafted.

"The Democrats sent a very political and long response memo which they knew, because of sources and methods (and more), would have to be heavily redacted, whereupon they would blame the White House for lack of transparency. Told them to re-do and send back in proper form!"

The Democrats sent a very political and long response memo which they knew, because of sources and methods (and more), would have to be heavily redacted, whereupon they would blame the White House for lack of transparency. Told them to re-do and send back in proper form!

The House intelligence committee voted Monday to release the Democratic memo, but it was up to Trump to decide whether to declassify the information it contained and give his approval for its release as he did last week with the Nunes memo. Democrats urged him to make the memo public, and even top Republican leaders such as House Speaker Paul Ryan, R-Wis., agreed it should be released just as the Nunes memo had been.

Schiff said in a statement Friday that Trump had released Nunes' "deeply flawed and inaccurate memo" without any redactions and despite concerns voiced by the Justice Department and the FBI. The memo "was described by the agencies as extraordinarily reckless and omitting material facts," the Democrat said.

"The Democratic response sets out the material facts that were necessary for the public to see that the FBI acted properly in seeking a FISA warrant on Carter Page," Schiff said. "After promising to treat the Democratic response in precisely the same way, the White House now seeks to have the Democratic memo sent back to committee and revised by the same Majority that produced the flawed Nunes document to begin with."

Schiff said that Democrats on the committee "will be reviewing the recommended redactions from DOJ and FBI, which these agencies shared with the White House, and look forward to conferring with the agencies to determine how we can properly inform the American people about the misleading attack on law enforcement by the GOP and address any concerns over [intelligence] sources and methods" and that they hope the matter can be resolved "quickly."

"The rationale for releasing the Nunes memo, transparency, vanishes when it could show information that's harmful to him. Millions of Americans are asking one simple question: What is he hiding?" Schumer also said in a statement.

Rep. Justin Amash, R-Mich., tweeted Friday that he had seen both the Democratic and Republican memos, that neither is damaging to national security and that the Democratic response should be released.

Both the Republican and Democratic #FISA memos should be released. I’ve read both memos. Neither one endangers national security. The American people deserve the opportunity to read both memos.

After the Nunes memo was released, Trump saw the document as evidence that the investigation by DOJ special counsel Robert Mueller was politically motivated.

"This memo totally vindicates 'Trump' in probe. But the Russian Witch Hunt goes on and on. Their [sic] was no Collusion and there was no Obstruction (the word now used because, after one year of looking endlessly and finding NOTHING, collusion is dead). This is an American disgrace!" the president tweeted Feb. 3, one day after the Nunes memo was released.

However, the Nunes memo also shows that the Justice Department and the FBI did not launch their probe into Russian interference in the 2016 election because of an unverified dossier about Trump and Russia compiled by former British spy Christopher Steele. Republicans have seized on the Steele dossier because he was commissioned by the political research firm Fusion GPS, which was hired by the Democratic National Committee and Hillary Clinton's campaign.

Instead, it was Trump campaign foreign policy adviser George Papadopoulos and meetings he had with agents of the Kremlin at which he was offered dirt on Hillary Clinton that triggered the investigation, the Nunes memo says. Papadopoulos has pleaded guilty to lying to the FBI about his contacts with Russians and Russian agents.

Trump also seized on revelations in the Nunes memo that Deputy Attorney General Rod Rosenstein approved a warrant application for surveillance on Page, raising the specter that the president could fire him, triggering a potential crisis in who would oversee Mueller's investigation. Attorney General Jeff Sessions has recused himself from the probe.

The White House has denied it is considering terminating Rosenstein. If that did happen, though, responsibility for overseeing the Mueller probe would then fall to the No. 3 official at the Justice Department, Associate Attorney General Rachel Brand. However, Brand announced Friday she will be departing the Justice Department in the coming weeks for a job in the private sector.

Rosenstein met with Trump on Tuesday to talk about the countermemo and begin the declassification review.

In a letter also released Friday by the White House, Rosenstein provided justification to the White House for not releasing the Schiff memo right now, writing to McGahn that the Justice Department has identified sections of the Democratic memo "the release of which would present such concerns in light of longstanding principles regarding the protection of intelligence sources and methods, ongoing investigations, and other similarly sensitive information," along with other "information for which national security or law enforcement concerns are especially significant."