Accessibility links
Rob Porter's Lack Of Security Clearance Raises Questions About Backlog Rob Porter was working at the White House with a temporary security clearance. Throughout the government, though, there is a big backlog of background checks that is hampering its function. 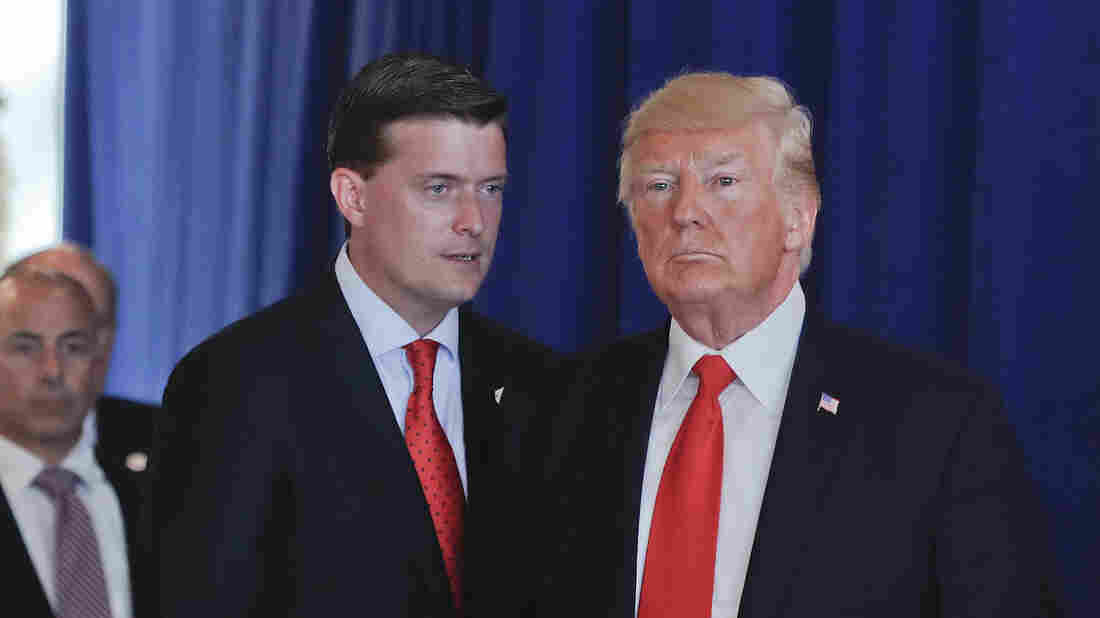 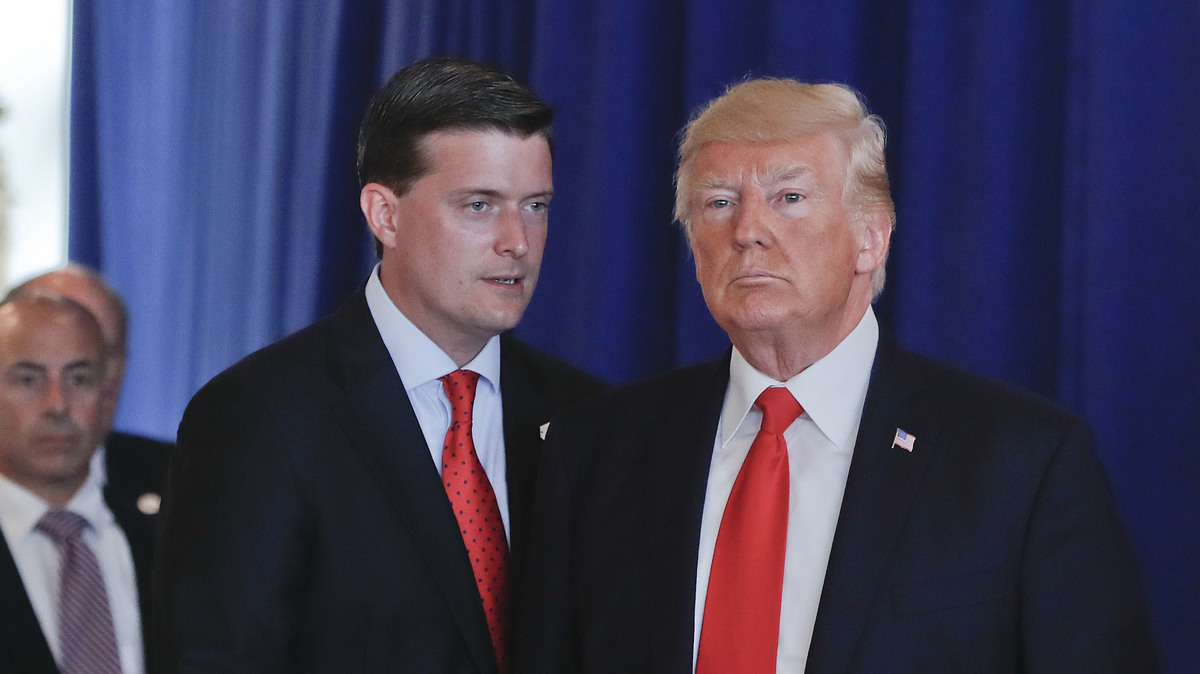 Ousted White House staff secretary Rob Porter speaks to President Trump after remarks he made on violence in Charlottesville, Va., in August 2017 at Trump National Golf Club in Bedminister, N.J.

The resignation of White House staff secretary Rob Porter after media reports of domestic abuse allegations against him — allegations he has denied — raises some key questions about government security clearances, and how they're obtained.

And the government is running into what security experts warn is a major problem — a mounting backlog that is hampering critical functions of the government. Some 700,000 people are waiting to have clearances processed, according to a report issued last week by the U.S. Comptroller's office, and many see the process as broken.

The problem is so acute that the Government Accountability Office two weeks ago added it to its list of "high-risk" programs "in need of either broad-based transformation or specific reforms to prevent waste, fraud, abuse, and mismanagement."

"A high-quality and timely personnel security clearance process is essential to minimize the risks of unauthorized disclosures of classified information and to help ensure that information about individuals with criminal histories or other questionable behavior is identified and assessed," U.S. Comptroller Gene Dodaro noted. "Our objective for the High Risk List is to bring attention to policymakers of the need for action sooner, rather than later. Renewed and strong top leadership commitment will be critical to facilitate progress in reducing the backlog and completing key improvements to the personnel security clearance process."

"We are wasting money hiring people, then not allowing them to do their job that they were hired for, because they may have to wait months or in certain cases even beyond a year before they get the security clearance," the Democrat from Virginia and ranking member of the Senate intelligence committee told NPR.

White House deputy press secretary Raj Shah said Thursday that Porter was working under an interim security clearance while his background check was being completed. For White House employees, President Trump, as commander in chief, can determine which executive branch workers have access to classified documents.

The FBI conducted interviews with Porter's former spouses, and the New York Times reported that Porter told his second wife, Jennifer Willoughby, that he believed the allegations against him had delayed his receiving a security clearance. His first wife, Colbie Holderness, released photos of herself with a black eye. Porter denies the allegations.

A second White House official, David Sorensen, was forced out Friday after allegations of domestic abuse by a former spouse surfaced. Sorensen was a speechwriter. He, too, denies to allegations. A White House official told NPR's Tamara Keith that Sorensen's position did not require a security clearance, but that his background check was ongoing.

President Trump seemed to leap to their defense Saturday, tweeting that "peoples lives are being shattered and destroyed by a mere allegation."

Sen. Richard Blumenthal, D-Conn., tweeted Thursday, however, that there were "chilling lapses in security and background clearance process shown by Rob Porter's access to classified info."

The problem is that with something like this in a White House official's background — something that could and did cost him his job — national-security experts warn that that person could be subject to blackmail by a foreign or domestic adversary. That's especially true when it comes to a person with close access to the president, like one responsible for putting the papers the president reads in front him.

What's more, the Washington Post reports this was not an isolated incident, and there's something of a security-clearance backlog at the White House, too:

"Dozens of White House employees are awaiting permanent security clearances and have been working for months with temporary approvals to handle sensitive information while the FBI continues to probe their backgrounds, according to U.S. officials."

That includes the president's son-in-law and top adviser Jared Kushner, who has been a subject in the ongoing Robert Mueller Russia probe.

So how do security clearances actually work?

The process throughout government to receive a security clearance is complex.

Clearances range from "confidential," the lowest level, to "secret" and "top secret.

"You're looking at anyone from the guy that washes dishes in the White House all the way up to Ph.D.-level scientists doing, you know, nuclear and biological work," said Evan Lesser, founder and president of ClearanceJobs, a website that attempts to match job applicants to openings in the government and with contractors.

He said security clearances are needed not just because a worker deals with classified documents — maybe they just work near them.

With all those jobs requiring security clearances, it stands to reason there's a bit of a wait to get one. The government has investigators and hires other contractors to conduct background checks of job applicants.

"At the basic level, they're going to look at, are you financially sound, your employment history, kind of the basics. Do you have a criminal record?" said Meagan Metzger, founder of Dcode, which helps companies work with the government. She herself held a Top Secret clearance at the Defense Department.

And for a Top Secret clearance, Metzger said there's a lot more that goes into it.

That can take time. For a Top Secret clearance, sometimes it can be more than a year. So what happens, in many instances, agencies hire applicants because of their skills, but then they can't be put into the jobs until they get their clearance.

And guess what? While they wait, many of the applicants are being paid, even though they're not filling the jobs they were hired for by government agencies or by contractors who fear the qualified applicants will take their skills elsewhere.

Warner, who has called for reforming the clearance approval process says it's a waste of taxpayer money.

"That's not an efficient way to run an operation," Warner said. "And many of these individuals have talents and skills, particularly as we move into the technology field, where they are desperately needed."

One reason for the backlog is the often low-tech methods investigators use to conduct background checks. Warner wants to see reforms to the background-check system, including better utilizing technology.

"Do you really need to personally talk to an individual's neighbors?" Warner asked. "Or the fact that you've traveled overseas one time — should these be the determining criteria rather than using technology means."

He points out that in some cases, investigators will pay an in-person visit to an applicant's college "and physically check the college records of individuals rather than doing that online."

Metzger said too many tactics haven't caught up to modern practices. She said she has sat in on background interviews where the investigators took notes on a pad of paper rather than using a tablet or even recording them.

More broadly, Metzger said investigators could and should a better job using technology to make connections they might miss with human interviews, including using data to "pinpoint connections and understand relationships" between people.

But background investigators and the agencies are risk-averse. Metzger added they worry about the headlines that would ensue "if we change this system and something goes awry, and we let a terrorist in the building."