Accessibility links
Dee Rees And Mary J. Blige Dug Into Their Roots To Make 'Mudbound' The director and singer/actress both drew upon their families' history to make the Oscar-nominated film. "I think I'm always exploring this idea about the battle being bloodier at home," Rees says. 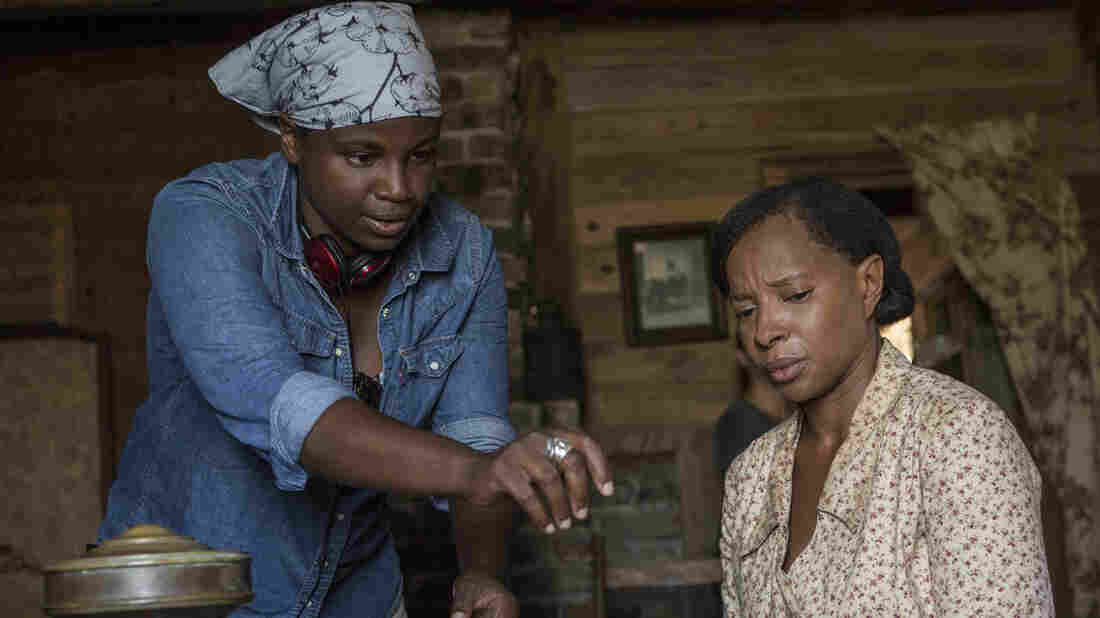 "I really needed an actress for Florence who could have vulnerability but also reserve," Rees (L) says. "... And I knew that Mary (R) had that." Steve Dietl/Netflix hide caption 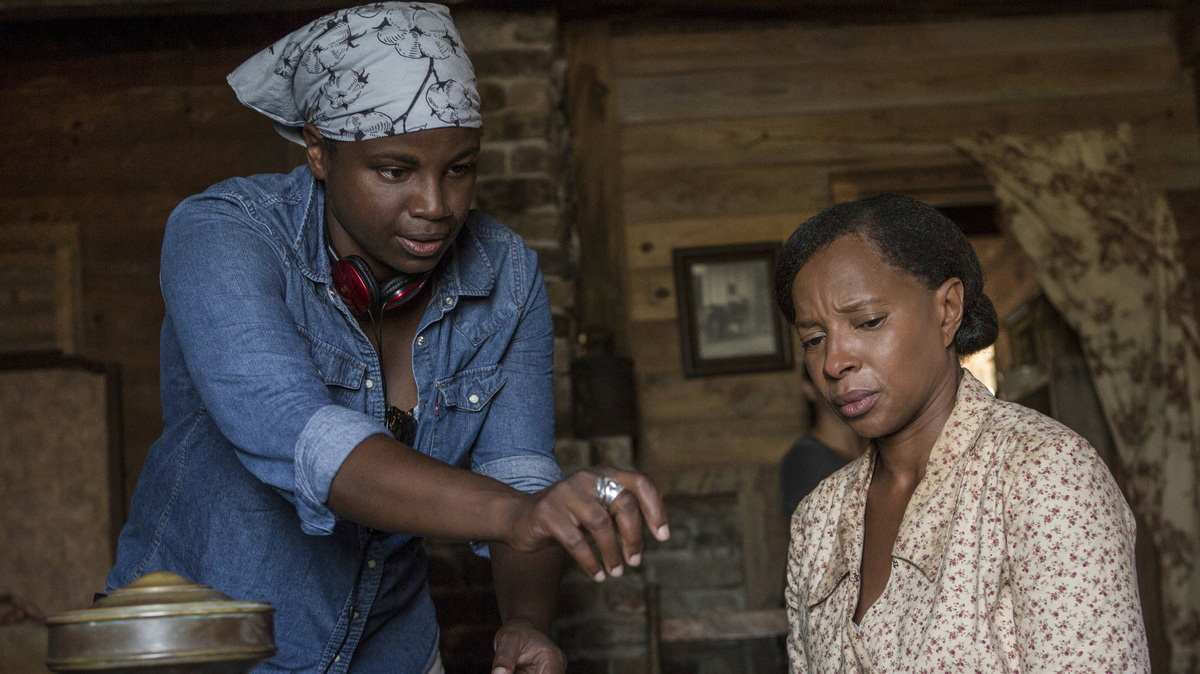 "I really needed an actress for Florence who could have vulnerability but also reserve," Rees (L) says. "... And I knew that Mary (R) had that."

Black History Month is a time when a lot of people remember firsts, such as Thurgood Marshall, the first African-American Supreme Court justice. Now, the film awards season has given us two new names to join those ranks.

Mudbound director Dee Rees is the first black woman nominated for an Oscar in Best Adapted Screenplay. Singer and actor Mary J. Blige is the first anyone — ever — to be nominated for both an acting performance and an original song in the same film.

That would be noteworthy enough, but Mudbound is much more than that. Critics have raved about the film, the story of two sharecropper families, one white and one black, trying to scratch out an existence in post-World War II Mississippi. The New York Times called it "a work of historical imagination that lands in the present with disquieting, illuminating force." And they've raved about how Mary J. Blige disappears into the role of Florence Jackson, the matriarch of the black family, whose oldest son has gone off to fight in the war and finds more dignity overseas than he does at home.

Rees: For me, no matter the size of the film, it always comes down to the performances. And so for me, the performance is about finding what's honest about each character. And so for Florence and for the Jackson family in particular in Mudbound, I really drew upon my grandmother's experiences. She was born in 1925 in Ferriday, La. And so she would tell me stories about [how] her and her little brother would ride on her mother's cotton sack 'cause her mother didn't want to leave them in the cabin. And so based on that, my grandmother felt like she never wanted to pick cotton. She said she wasn't going to clean anybody's house. She wanted to be a stenographer, and so that's one of the things that I injected in the story, making Florence's daughter want to be a stenographer — to be this thing, kind of, beyond what she could see in everyday life. And the idea of the kids playing war and just all the, kind of, we'd call them micro-aggressions today, that try to chip away at the Jackson family's sense of self and sense of entitlement.

On why Rees wanted to make the film

Rees: It was the chance to really get into Florence Jackson and Hap (Rob Morgan), and just really show them as people that had agency, that had ideas about their lives. They weren't just waiting for something to happen. Like this idea of wanting ownership of land, that's something that's big in my family. When I first moved to New York, in fact, and had bought a co-op, my parents came to visit. They're like, "This is good, but where's your land?" And I was like, "Nah, nah, nah. It's a co-op, like there's no land involved." And they were just thinking I made the biggest mistake of my life. And so I wanted to bring all that to these characters and give them depth. And Ronsel Jackson (Jason Mitchell), here's a guy whose biggest battle is at home, and like Pariah and like Bessie, I think I'm always exploring this idea about the battle being bloodier at home, you know. Sometimes it's easier to win elsewhere.

On how Mary J. Blige prepared for her role as Florence

Blige: I went and got an acting coach; I went and got someone that can help me bring all these things I was feeling and that I have even lived as a child. When I was a young girl — when I was a little girl — my mom used to send us down to Georgia every summer. So I knew what it felt like to have my hands in the dirt and to pick beans, and to pick whatever was in the field and to watch my grandmother, who was a sharecropper — and a sharecropper's wife. They had a farm; they had chickens. And whatever they killed, we had to eat, and whatever they pulled out of the field, we had to shell beans, we had to pick peas, we had to cut greens. We had to do all that stuff. So I guess it was already in my DNA and embedded in me, 'cause every woman — my aunt Sadie, my aunt Helen — all of my aunts were these women. So I think I was prepared, honestly, just through experience.

And just having Dee just being the, you know, one of the most amazing directors, one of the most sure, confident women to come up to you every time she wanted you to do something. And her direction was just everything I needed to make Florence come to life. 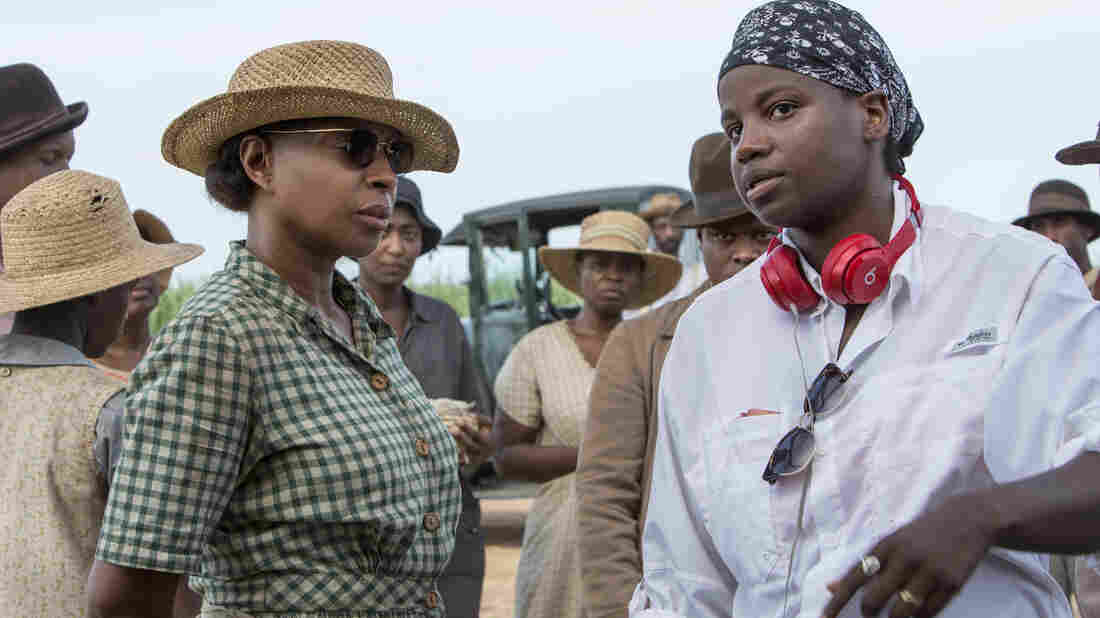 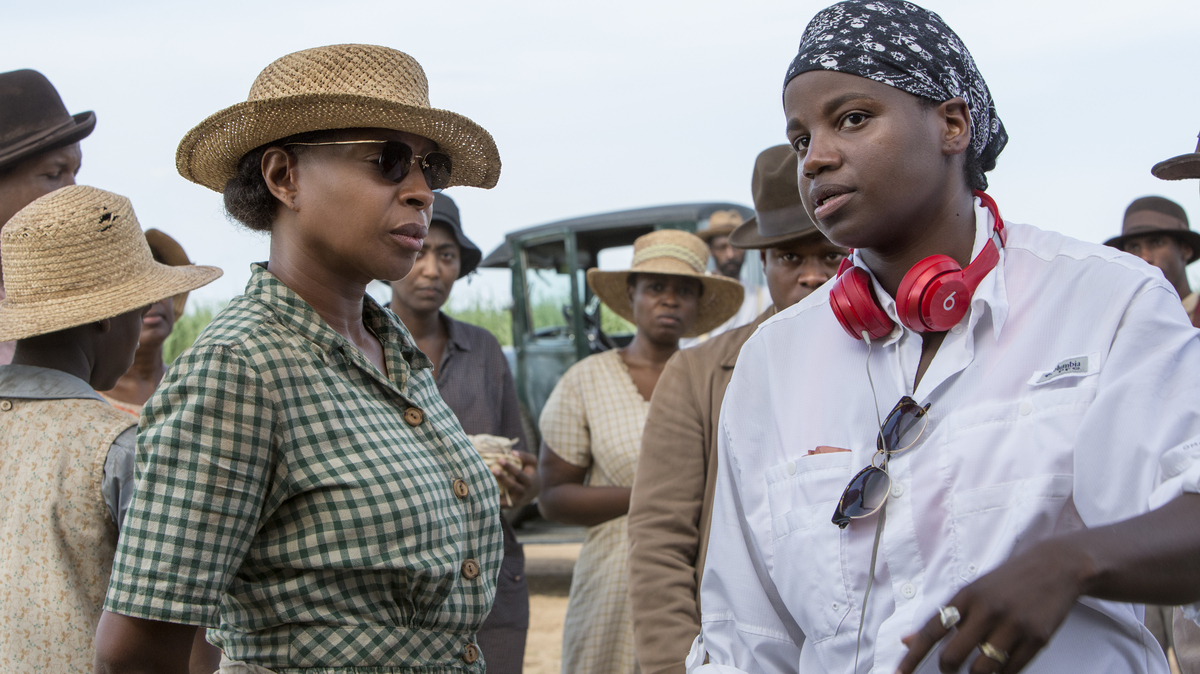 "Her direction was just everything I needed to make Florence come to life," Blige (L) says of Rees (R).

On finding a new level of vulnerability in her Mudbound performance

Blige: I didn't even know that I was that vain until I had to go there. I'm serious, like I think because I'm so used to — you see me, you see me not being afraid to share, just rip into, relive "No More Drama," relive "Not Gon' Cry," relive whatever it is — embarrassment, humility, whatever it is you see me live through. But I just didn't know that I was so vain until I had to take away these things, or I was that insecure, that I had to take away these things, like wigs and weaves and lashes and nails. And these are little things that I was hanging onto that made me be like, "Wait a minute, are you really, really deep or not?" It just really opened me up and it freed me, and it made me see myself in a deeper way because I did not know I was hanging onto these things so tight until Dee said, "No, let them go. Florence needs to live."

On the significance of how Mudbound was made, and who made it

Rees: I think that this film demonstrates that when art is kind of received, viewed, and critiqued based on the merits of the craft rather than who made it, it necessarily opens the door up to a lot more makers. When you look at this film and a woman [director of photography] shot it, a woman director shot it, a woman composer, a woman editor, you know, all those things become undeniable.

And so, even when the film, you know, I'd say the conversation from when this film premiered at Sundance in 2017 to when it came to Toronto that fall changed, 'cause I think that people just had a different critical distance to it. And they were able to kind of acknowledge it and see it and, I think at first there was maybe a doubt, like, "Are we really seeing what we're seeing, is it really this good?" And that the film was able to last I think spoke volumes. It became this force. It became undeniable. And as people compared it to everything else that came out, the craft work of these women, of these actors and actresses, it stood up.

Marc Rivers and Natalie Winston produced and edited this interview for broadcast. Sydnee Monday adapted it for the Web.